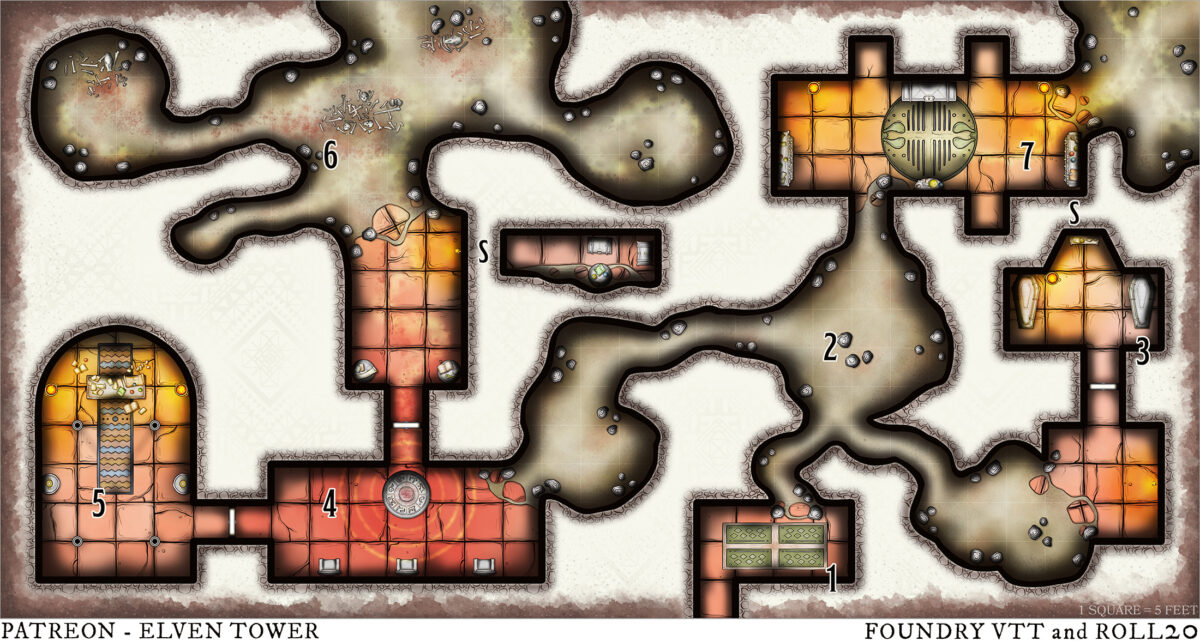 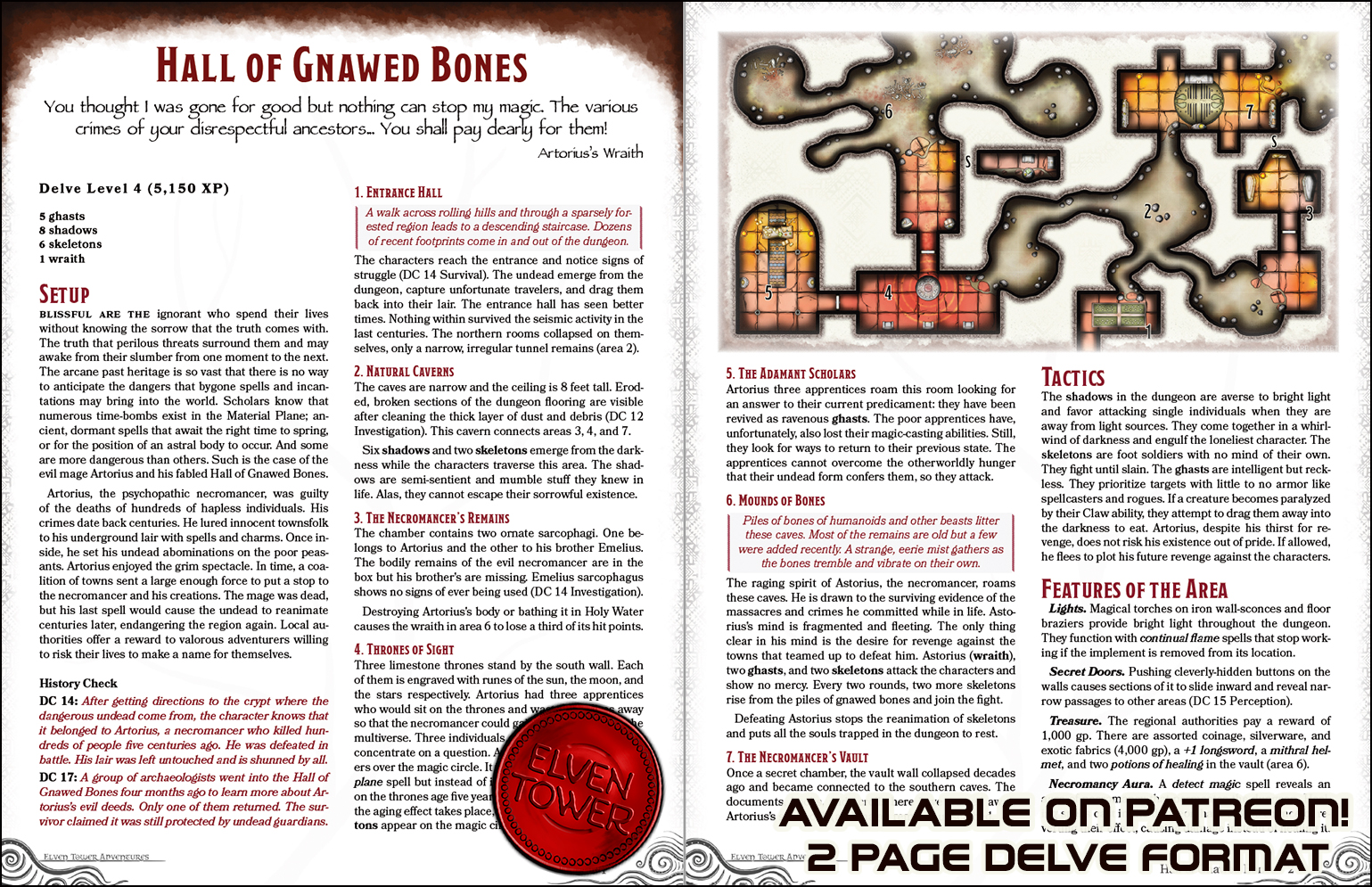 You thought I was gone for good but nothing can stop my magic. The various crimes of your disrespectful ancestors… You shall pay dearly for them!

Blissful are the ignorant who spend their lives without knowing the sorrow that the truth comes with. The truth that perilous threats surround them and may awake from their slumber from one moment to the next. The arcane past heritage is so vast that there is no way to anticipate the dangers that bygone spells and incan­tations may bring into the world. Scholars know that numerous time-bombs exist in the Material Plane; an­cient, dormant spells that await the right time to spring, or for the position of an astral body to occur. And some are more dangerous than others. Such is the case of the evil mage Artorius and his fabled Hall of Gnawed Bones.

Artorius, the psychopathic necromancer, was guilty of the deaths of hundreds of hapless individuals. His crimes date back centuries. He lured innocent townsfolk to his underground lair with spells and charms. Once in­side, he set his undead abominations on the poor peas­ants. Artorius enjoyed the grim spectacle. In time, a coa­lition of towns sent a large enough force to put a stop to the necromancer and his creations. The mage was dead, but his last spell would cause the undead to reanimate centuries later, endangering the region again. Local au­thorities offer a reward to valorous adventurers willing to risk their lives to make a name for themselves.

DC 14: After getting directions to the crypt where the dangerous undead come from, the character knows that it belonged to Artorius, a necromancer who killed hun­dreds of people five centuries ago. He was defeated in battle. His lair was left untouched and is shunned by all.

DC 17: A group of archaeologists went into the Hall of Gnawed Bones four months ago to learn more about Ar­torius’s evil deeds. Only one of them returned. The sur­vivor claimed it was still protected by undead guardians.

A walk across rolling hills and through a sparsely for­ested region leads to a descending staircase. Dozens of recent footprints come in and out of the dungeon.

The characters reach the entrance and notice signs of struggle (DC 14 Survival). The undead emerge from the dungeon, capture unfortunate travelers, and drag them back into their lair. The entrance hall has seen better times. Nothing within survived the seismic activity in the last centuries. The northern rooms collapsed on them­selves, only a narrow, irregular tunnel remains (area 2).

The caves are narrow and the ceiling is 8 feet tall. Erod­ed, broken sections of the dungeon flooring are visible after cleaning the thick layer of dust and debris (DC 12 Investigation). This cavern connects areas 3, 4, and 7.

Six shadows and two skeletons emerge from the dark­ness while the characters traverse this area. The shad­ows are semi-sentient and mumble stuff they knew in life. Alas, they cannot escape their sorrowful existence.

The chamber contains two ornate sarcophagi. One be­longs to Artorius and the other to his brother Emelius. The bodily remains of the evil necromancer are in the box but his brother’s are missing. Emelius sarcophagus shows no signs of ever being used (DC 14 Investigation).

Destroying Artorius’s body or bathing it in Holy Water causes the wraith in area 6 to lose a third of its hit points.

Three limestone thrones stand by the south wall. Each of them is engraved with runes of the sun, the moon, and the stars respectively. Artorius had three apprentices who would sit on the thrones and waste their lives away so that the necromancer could gain more insight into the multiverse. Three individuals can sit on the thrones and concentrate on a question. A vision with the answer hov­ers over the magic circle. It functions like a contact other plane spell but instead of its mental cost, those who sit on the thrones age five years. After the device is used and the aging effect takes place, two shadows and two skele­tons appear on the magic circle and attack.

Artorius three apprentices roam this room looking for an answer to their current predicament: they have been revived as ravenous ghasts. The poor apprentices have, unfortunately, also lost their magic-casting abilities. Still, they look for ways to return to their previous state. The apprentices cannot overcome the otherworldly hunger that their undead form confers them, so they attack.

Piles of bones of humanoids and other beasts litter these caves. Most of the remains are old but a few were added recently. A strange, eerie mist gathers as the bones tremble and vibrate on their own.

The raging spirit of Astorius, the necromancer, roams these caves. He is drawn to the surviving evidence of the massacres and crimes he committed while in life. Asto­rius’s mind is fragmented and fleeting. The only thing clear in his mind is the desire for revenge against the towns that teamed up to defeat him. Astorius (wraith), two ghasts, and two skeletons attack the characters and show no mercy. Every two rounds, two more skeletons rise from the piles of gnawed bones and join the fight.

Defeating Astorius stops the reanimation of skeletons and puts all the souls trapped in the dungeon to rest.

Once a secret chamber, the vault wall collapsed decades ago and became connected to the southern caves. The documents, books, and scrolls here have wasted away. Artorius’s spellbook (archmage) remains unscathed.

The shadows in the dungeon are averse to bright light and favor attacking single individuals when they are away from light sources. They come together in a whirl­wind of darkness and engulf the loneliest character. The skeletons are foot soldiers with no mind of their own. They fight until slain. The ghasts are intelligent but reck­less. They prioritize targets with little to no armor like spellcasters and rogues. If a creature becomes paralyzed by their Claw ability, they attempt to drag them away into the darkness to eat. Artorius, despite his thirst for re­venge, does not risk his existence out of pride. If allowed, he flees to plot his future revenge against the characters.

Lights. Magical torches on iron wall-sconces and floor braziers provide bright light throughout the dungeon. They function with continual flame spells that stop work­ing if the implement is removed from its location.

Secret Doors. Pushing cleverly-hidden buttons on the walls causes sections of it to slide inward and reveal nar­row passages to other areas (DC 15 Perception).

Treasure. The regional authorities pay a reward of 1,000 gp. There are assorted coinage, silverware, and exotic fabrics (4,000 gp), a +1 longsword, a mithral hel­met, and two potions of healing in the vault (area 6).

Necromancy Aura. A detect magic spell reveals an aura of necromancy that permeates the dungeon. Heal­ing spells cast in the dungeon have a 30% chance of re­verting their effect, causing damage instead of healing it. 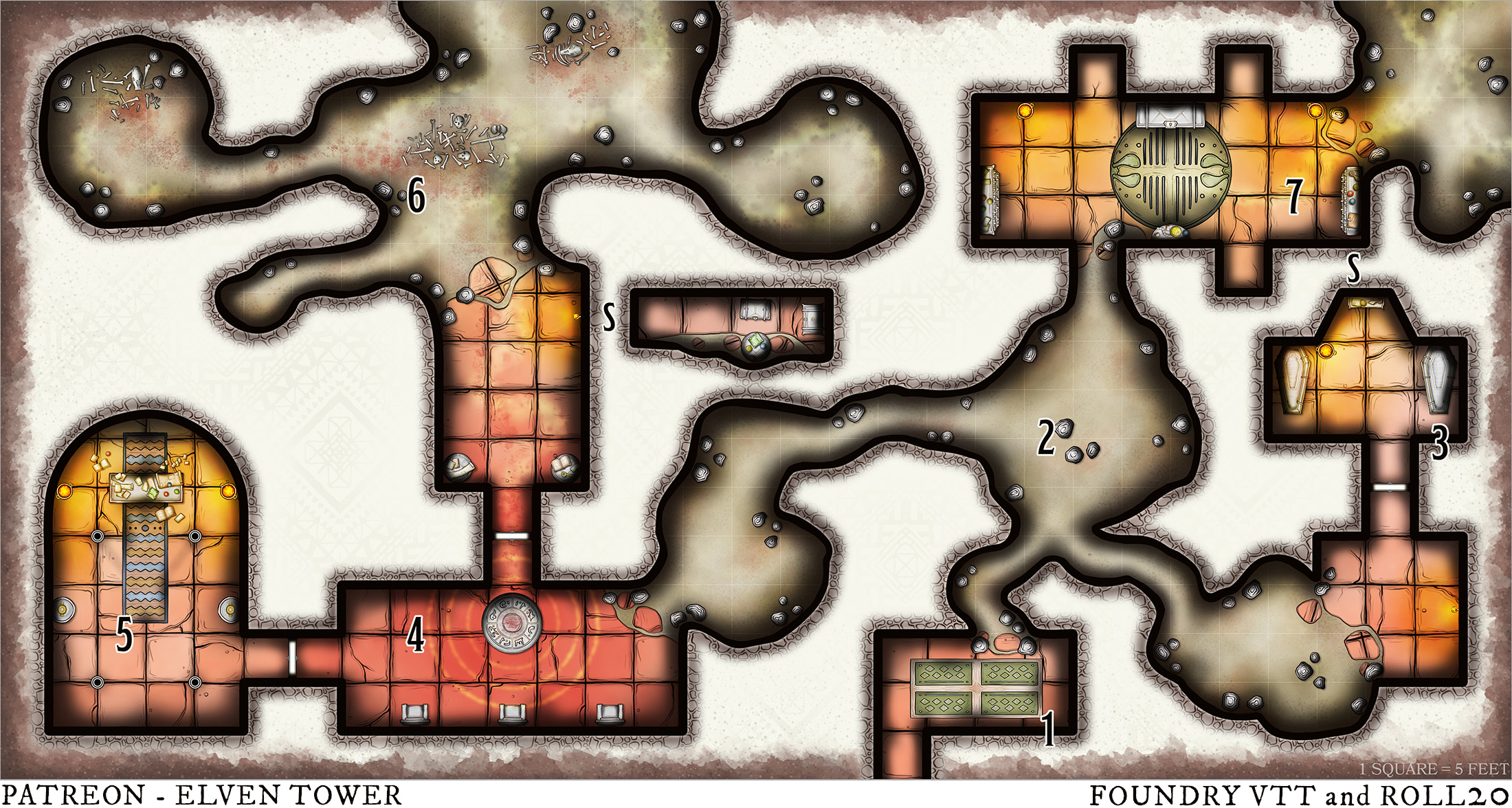