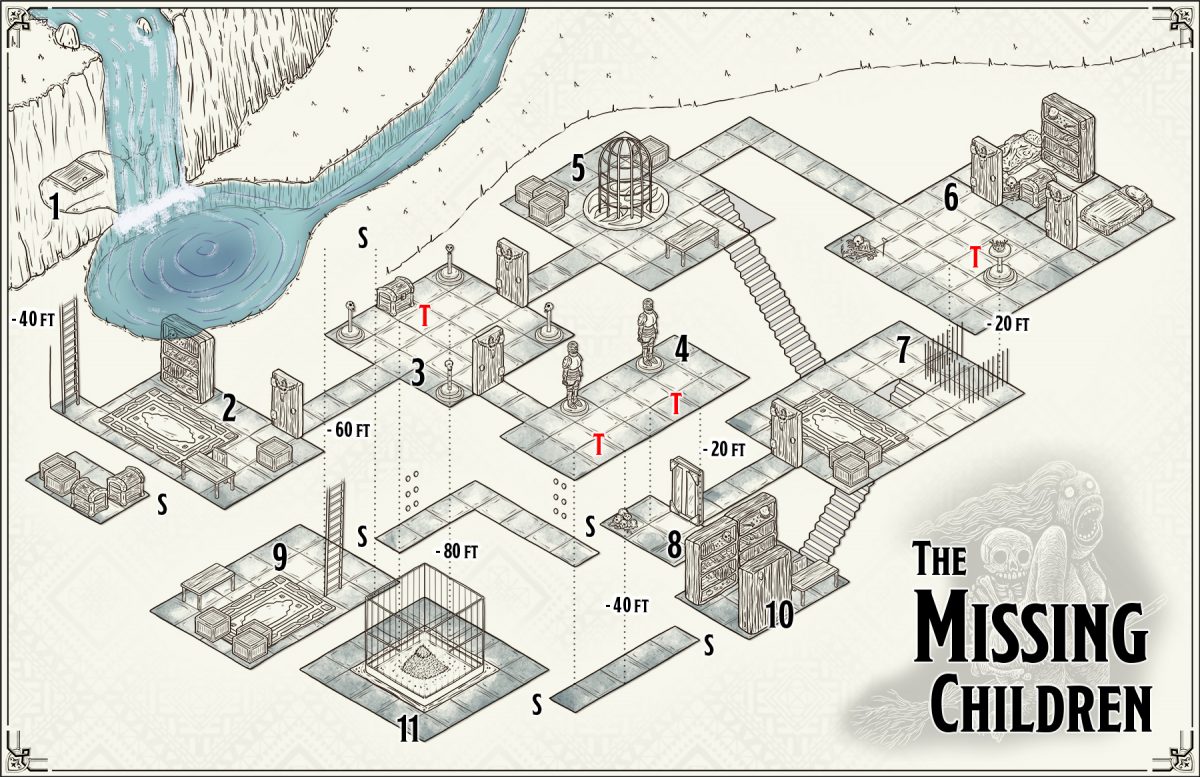 You don’t understand, they’re my beloved children, I would do anything for them! Forest witch

Most parents resort to horror tales to persuade their children into obeying and going to bed. They often describe evil spirits that hunt mischievous children. Monsters under the bed or inside a wardrobe that eat lazy little ones are common too. However, even the most troublesome younglings tremble to the core when tales about witches reach their ears. These stories are the last resort for parents with unruly offspring.

Brownmoss Town is the closest settlement to Sungreen Forest. It oversees the several smaller settlements throughout the woods’ surroundings. Nighttime tales about witches and monsters from the woods are more than common, even popular around the area.

Nevertheless, the tales stopped being fun a few months ago. Children started to disappear near the forest and were never found. The culprit is still at large as of yet. The number of families looking for their youngest members increases by the day. All fingers point to the depths of Sungreen Forest. Searching parties sent to track down the missing younglings have been attacked too.

The creature responsible for the disappearances is a forest witch. She is a hag from the woods who fosters a deluded sentiment of becoming a mother one day. She is evil and deranged. She kidnaps little children to suck their life energy and stay forever young. In truth, she cares not for the innocent ones. Furthermore, her ancient witchcraft makes puppets of the poor children. They become horrible, purulent, tiny humans with claws that know nothing but to obey their foul creator.

The kidnapped infants were turned into monsters. The monster children (goblins) are scattered all around the witch’s lair. They obey her orders without hesitation and call the old hag “mother”; she refers to them as her children too. The witch’s lair is well-hidden in Greensoil Forest, behind a waterfall. She has abducted more than thirty children and has drawn too much attention.

Brandon Riggs, the leader of Brownmoss Town’s city watch, has received too many reports about missing children for the past few months. The affected families in the region demand a swift solution. Brandon offers 2,500 gp to mercenaries and sellswords for arresting the culprit and saving as many children as it is possible.

Features of the Forest Witch Lair

The following features correspond to the underground forest witch lair; areas 1 through 11.

Smells and Sounds. The underground lair is an ancient construction below the forest soil. It has a damp smell. Grunts and growls are heard often. They belong to the monster children who cannot contain themselves.

Traps. From poison darts to pressure-sensitive tiles that hide trapdoors, the witch placed many booby-traps throughout her lair. Perceptive characters discern the hidden traps and devices (DC 14 Perception). A capable rogue can disarm the devices (DC 16 Thieves’ Tools).

The tracks in Sungreen Forest lead to a clearing with a shallow cliff-face and a gushing waterfall.

The characters find clear tracks that end at the water’s edge (DC 11 Survival). They belong to the past scouting parties that either fled or failed to find the children.

Entrances. The characters notice the cave entrance behind the waterfall within 20 feet of the lake. If the characters search the area, they might find the secret escape route that takes them to area 9 (DC 15 Perception).

This room contains a rug, a desk with papers, and a bookshelf. Everything looks recently used. Two monster children scream incoherently and attack any trespasser.

Lore. If the characters spend 10 minutes searching the area, they learn that the witch is more than 300 years old. She has been in these woods all her life and her diet to keep her young consists of imbibing children’s blood.

Secret Vault. Two stone chests lie by the walls of this chamber. One contains 589 gp in assorted coins, and 345 gp worth of silverware. The second has a spell scroll of bless and a spell scroll of cure light wounds.

Four stone pedestals adorn the corners of this chamber. A wooden chest lies by the north wall.

The witch placed this empty chest as a material temptation for fools who dare enter her home. Opening it triggers a double trap that may split the party.

Traps. The pedestals shoot sleep darts toward the creature that manipulated the chest (DC 13 Constitution). After that, the trapdoor opens and the creature falls 80 feet, lands in the hay in area 11, and takes 4d6 bludgeoning damage (DC 15 Dexterity for half).

There are five monster children in this chamber. They scream and attack any intruders. If they drop to half their hit points, the children flee to wherever the forest witch is at the moment of this encounter. The two animated armors in this area are tasked with defending the lair from intruders. When they fight, they stand their ground and attempt to push their foes toward the two trapdoors before them. The armors fight relentlessly until slain.

Trapdoors. Both marked tiles (see map) feature pressure-sensitive plates that drop under any weight above 50 pounds. They lead to different areas of the dungeon.

Steel bars placed together, similar to a birdcage give shape to a horrible container. Two filthy, scared children cry and sob from inside their cell.

The hag transforms children inside the cage into monsters with her witchcraft. The forest witch (green hag disguised as a young woman) and six monster children are here. The hag plays the role of a woman in distress, attacked by the hungry monster children. The witch wants the characters to fight her goons while she waits for an opportunity to backstab an unwary opponent.

The witch does not fight to the death. She employs all resources available to stay alive. Her minor illusion spell and Mimicry abilities are useful to fool her enemies. If needed she becomes invisible and flees to another area.

The larger bedroom belongs to the forest witch. Infantile sobs come from inside the smaller bedroom.

Trap. The silver crown (150 gp) is there for the taking. Creatures that fail to see the pressure plate fall 20 feet to area 7 and receive 2d6 damage (DC 16 Perception).

Celeste. The little girl ignores why the witch keeps her here, though the hag often refers to her as “her favorite” or “the special one”. She reveals that the monsters are children. She is afraid of becoming one of them.

This large room features a central staircase that descends further underground. A small boy cries for help from inside the holding cell by the east wall.

David is here for spitting at the witch. He shall be transformed soon. Five monster children growl and throw pebbles at the innocent child from outside the cage.

Cell. Creatures that fall from area 6 share David’s cell. The poor child has failed miserably in all his attempts to bend the iron bars and escape (DC 16 Athletics).

Creatures within the cell are surrounded by stone walls with several tiny holes that almost reach the ceiling. A thick steel door blocks the only visible exit (see below). Creatures that fall from area 4 receive 2d6 damage. The steel door cannot be opened by force. The right tools bypass the lock, though (DC 17 Thieves’ Tools).

Gas. This cell is reserved for the witch’s true enemies. The small holes in the cell release sleeping gas whenever a creature ends up here (DC 15 Constitution).

Witch’s Strategy. If the witch survives the encounter in area 5, she waits for the characters in area 11. However, if one of them gets trapped here and falls asleep, the hag approaches using the secret tunnel to area 9 and kills them while they are unconscious. The witch hopes the characters realize she is not to be messed with and demands they abandon her lair at once when they meet again. Still, her survival is more important to her and she doesn’t act brave before a losing battle (see Conclusion).

This area is the hag’s last resort. If she fails to stop the characters, she escapes through the ladder.

Traps. There are two traps in the secret corridor toward area 8. If the characters fail to notice the small holes on the walls or the pressure-sensitive tiles that trigger the darts, they take 1d6 poison damage and become poisoned for one hour (DC 12 Constitution).

The bookshelves in this room are well-organized and stacked with books and tomes of all kinds.

Despite their evil nature, hags are intelligent magical creatures that often delve into the deepest fabrics of black magic. The monster children are living proof.

Lore. The ritual book on the desk depicts the foul ritual that turns children into mindless monsters. A spellcaster can replicate the procedure after studying it for 2d4 hours (DC 13 Arcana). The book shows no cure.

Treasure. Several tomes and scrolls are valuable to any librarian, curator, or book collector (750 gp)

A large cell with tall iron bars keeps a small group of infants inside. A mountain of hay is all that accompanies the innocent souls trapped here.

The witch enjoys tormenting the children before sucking their blood and transforming their poor little bodies. If the characters get here from the secret corridor, the six trapped children beg for their help. In contrast, they scream and cry if a character lands here from area 3.

Witch’s Strategy. If the witch survives the encounter in area 5, she waits for the characters here. If one of them falls asleep and fell from area 3, she kills them while they are unconscious before the others arrive and leaves the body with the scared children. She puts her well-being above everything else if this fails to stop the characters.

The characters fail to stop the witch or she manages to escape. Celeste, David, and the other caged children are saved from a horrible fate. Monster children killed in combat, however, lose their lives. Nothing short of a resurrection spell can return them to life. It might be too late before the characters realize this sad truth. However, if the characters knocked the children out, divine magic can still cure them. Spells like greater restoration or heal can return a monster child to normal. Healing these children shall be an adventure for another day.

The Children are Saved

The children return to normal when the witch’s heart stops beating. Celeste, David, and the other trapped children are safe. If the characters’ deeds caused the loss of innocent children’s lives during this quest, atoning for their sins is an adventure for some other time. 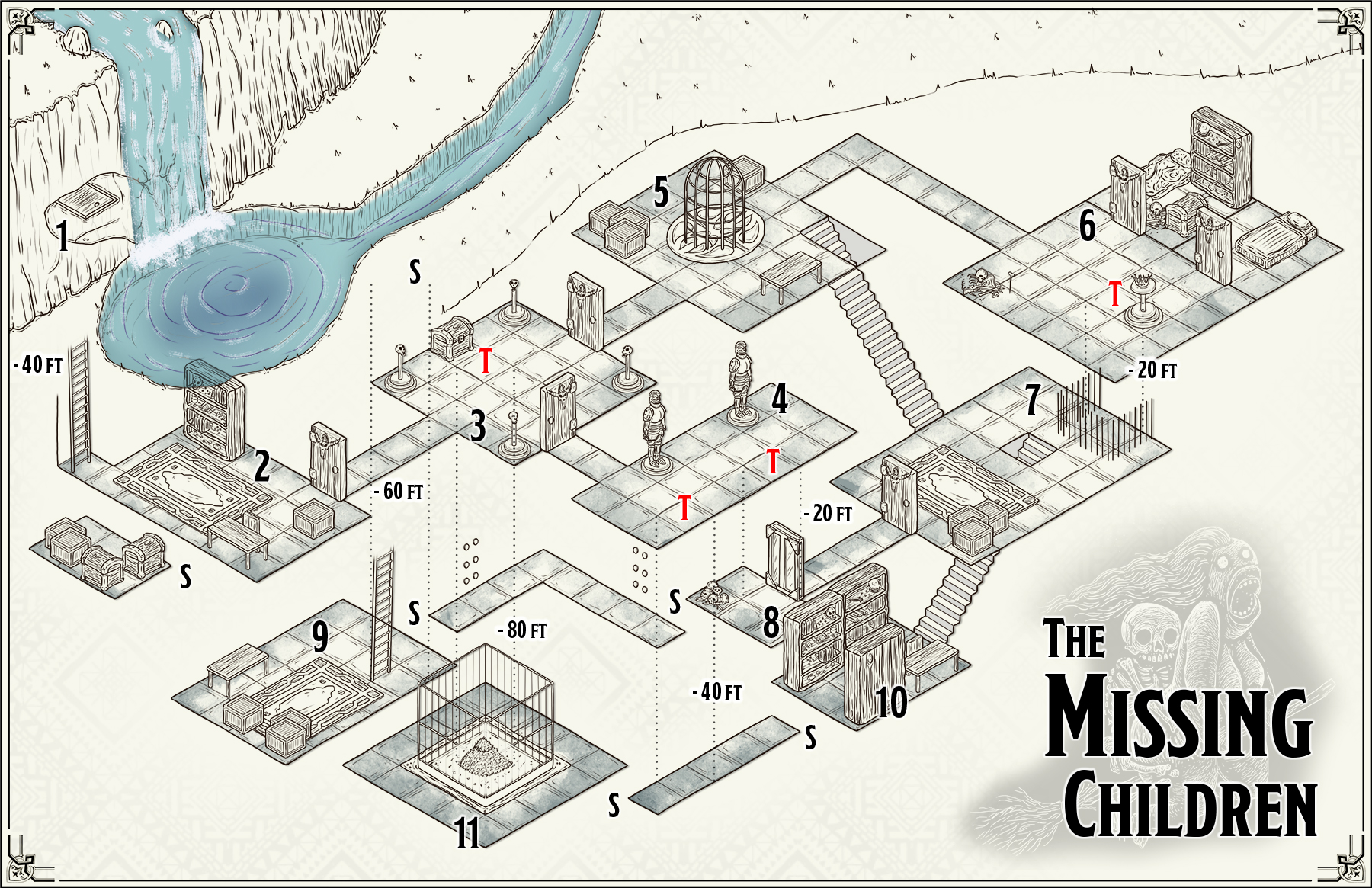