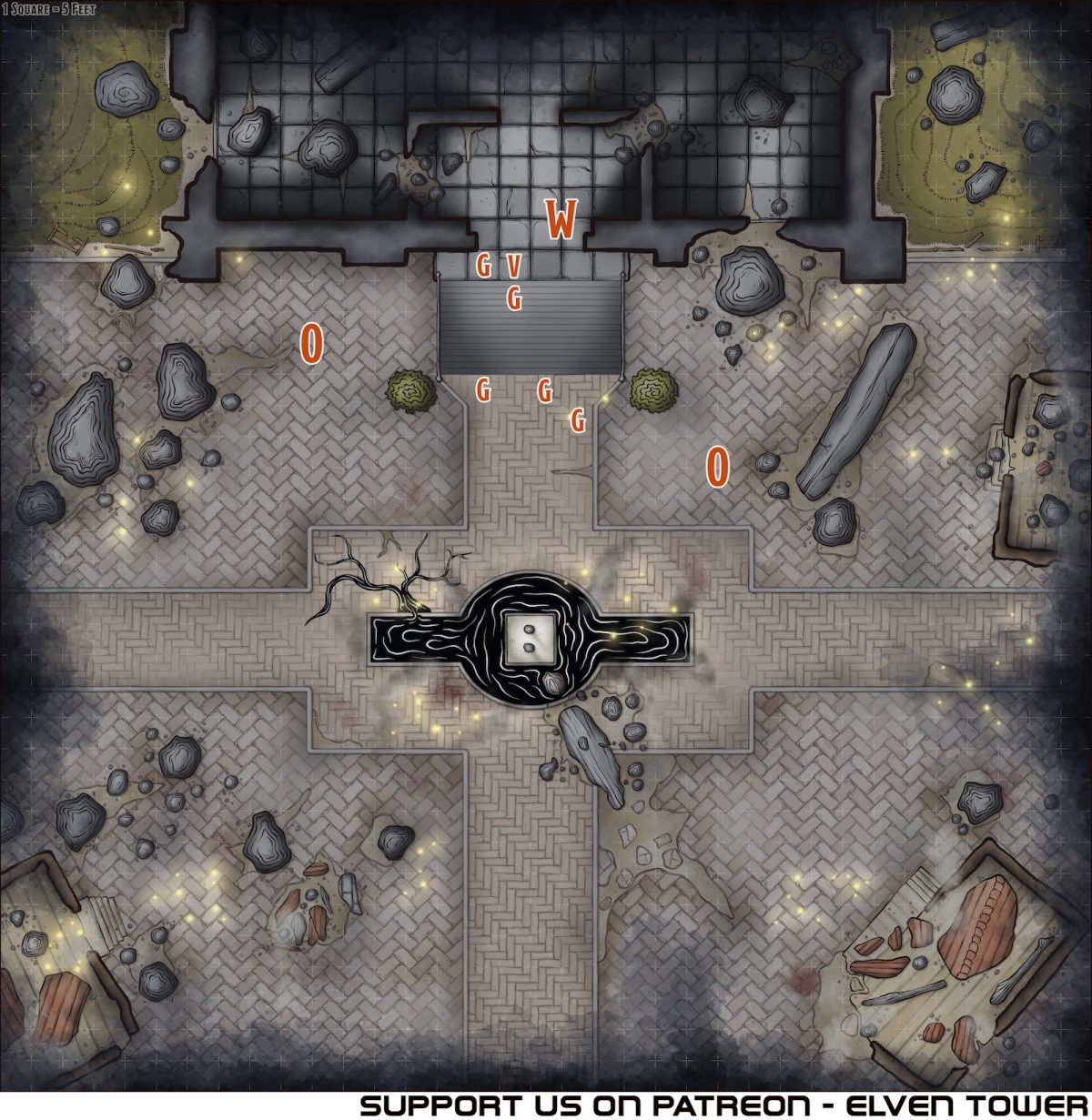 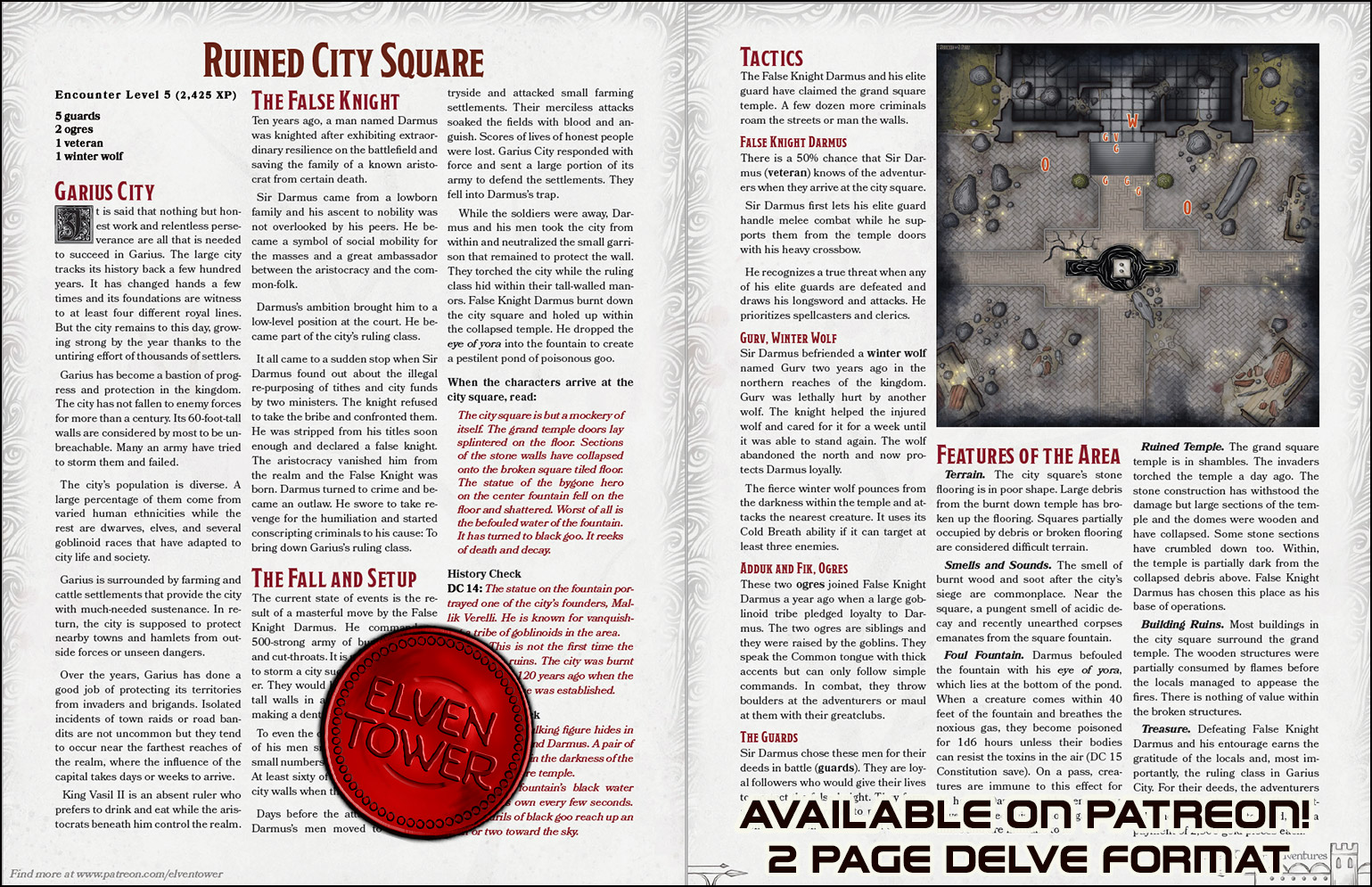 It is said that nothing but honest work and relentless perseverance are all that is needed to succeed in Garius. The large city tracks its history back a few hundred years. It has changed hands a few times and its foundations are witness to at least four different royal lines. But the city remains to this day, growing strong by the year thanks to the untiring effort of thousands of settlers.

Garius has become a bastion of progress and protection in the kingdom. The city has not fallen to enemy forces for more than a century. Its 60-foot-tall walls are considered by most to be unbreachable. Many an army have tried to storm them and failed.

The city’s population is diverse. A large percentage of them come from varied human ethnicities while the rest are dwarves, elves, and several goblinoid races that have adapted to city life and society.

Garius is surrounded by farming and cattle settlements that provide the city with much-needed sustenance. In return, the city is supposed to protect nearby towns and hamlets from outside forces or unseen dangers.

Over the years, Garius has done a good job of protecting its territories from invaders and brigands. Isolated incidents of town raids or road bandits are not uncommon but they tend to occur near the farthest reaches of the realm, where the influence of the capital takes days or weeks to arrive.

King Vasil II is an absent ruler who prefers to drink and eat while the aristocrats beneath him control the realm.

Ten years ago, a man named Darmus was knighted after exhibiting extraordinary resilience on the battlefield and saving the family of a known aristocrat from certain death.

Sir Darmus came from a lowborn family and his ascent to nobility was not overlooked by his peers. He became a symbol of social mobility for the masses and a great ambassador between the aristocracy and the common-folk.

Darmus’s ambition brought him to a low-level position at the court. He became part of the city’s ruling class.

It all came to a sudden stop when Sir Darmus found out about the illegal re-purposing of tithes and city funds by two ministers. The knight refused to take the bribe and confronted them. He was stripped from his titles soon enough and declared a false knight. The aristocracy vanished him from the realm and the False Knight was born. Darmus turned to crime and became an outlaw. He swore to take revenge for the humiliation and started conscripting criminals to his cause: To bring down Garius’s ruling class.

The Fall and Setup

The current state of events is the result of a masterful move by the False Knight Darmus. He commands a 500-strong army of burglars, thugs, and cut-throats. It is not strong enough to storm a city such as Garius, however. They would be crushed under the tall walls in a few minutes without making a dent in the city’s defenses.

To even the odds, Darmus and a few of his men sneaked into the city in small numbers over a period of weeks. At least sixty of them were within the city walls when the attack began.

Days before the attack, the rest of Darmus’s men moved to the countryside and attacked small farming settlements. Their merciless attacks soaked the fields with blood and anguish. Scores of lives of honest people were lost. Garius City responded with force and sent a large portion of its army to defend the settlements. They fell into Darmus’s trap.

While the soldiers were away, Darmus and his men took the city from within and neutralized the small garrison that remained to protect the wall. They torched the city while the ruling class hid within their tall-walled manors. False Knight Darmus burnt down the city square and holed up within the collapsed temple. He dropped the eye of yora into the fountain to create a pestilent pond of poisonous goo.

When the characters arrive at the city square, read:

The city square is but a mockery of itself. The grand temple doors lay splintered on the floor. Sections of the stone walls have collapsed onto the broken square tiled floor. The statue of the bygone hero on the center fountain fell on the floor and shattered. Worst of all is the befouled water of the fountain. It has turned to black goo. It reeks of death and decay.

DC 14: The statue on the fountain portrayed one of the city’s founders, Mallik Verelli. He is known for vanquishing a tribe of goblinoids in the area.

DC 16: This is not the first time the temple is in ruins. The city was burnt to the ground 120 years ago when the current royal line was established.

DC 14: A dark hulking figure hides in the shadows behind Darmus. A pair of white eyes shine in the darkness of the ruined city square temple.

DC 16: The fountain’s black water moves on its own every few seconds. Slim tendrils of black goo reach up an inch or two toward the sky. Tactics

The False Knight Darmus and his elite guard have claimed the grand square temple. A few dozen more criminals roam the streets or man the walls.

There is a 50% chance that Sir Darmus (veteran) knows of the adventurers when they arrive at the city square.

Sir Darmus first lets his elite guard handle melee combat while he supports them from the temple doors with his heavy crossbow.

He recognizes a true threat when any of his elite guards are defeated and draws his longsword and attacks. He prioritizes spellcasters and clerics.

Sir Darmus befriended a winter wolf named Gurv two years ago in the northern reaches of the kingdom. Gurv was lethally hurt by another wolf. The knight helped the injured wolf and cared for it for a week until it was able to stand again. The wolf abandoned the north and now protects Darmus loyally.

The fierce winter wolf pounces from the darkness within the temple and attacks the nearest creature. It uses its Cold Breath ability if it can target at least three enemies.

These two ogres joined False Knight Darmus a year ago when a large goblinoid tribe pledged loyalty to Darmus. The two ogres are siblings and they were raised by the goblins. They speak the Common tongue with thick accents but can only follow simple commands. In combat, they throw boulders at the adventurers or maul at them with their greatclubs.

Sir Darmus chose these men for their deeds in battle (guards). They are loyal followers who would give their lives to protect the false knight. They form a line before Darmus to protect him from melee combatants at all costs.

Terrain. The city square’s stone flooring is in poor shape. Large debris from the burnt down temple has broken up the flooring. Squares partially occupied by debris or broken flooring are considered difficult terrain.

Smells and Sounds. The smell of burnt wood and soot after the city’s siege are commonplace. Near the square, a pungent smell of acidic decay and recently unearthed corpses emanates from the square fountain.

Foul Fountain. Darmus befouled the fountain with his eye of yora, which lies at the bottom of the pond. When a creature comes within 40 feet of the fountain and breathes the noxious gas, they become poisoned for 1d6 hours unless their bodies can resist the toxins in the air (DC 15 Constitution save). On a pass, creatures are immune to this effect for 24 hours. Darmus and his entourage have breathed this noxious gas many times and are immune to it.

Ruined Temple. The grand square temple is in shambles. The invaders torched the temple a day ago. The stone construction has withstood the damage but large sections of the temple and the domes were wooden and have collapsed. Some stone sections have crumbled down too. Within, the temple is partially dark from the collapsed debris above. False Knight Darmus has chosen this place as his base of operations.

Building Ruins. Most buildings in the city square surround the grand temple. The wooden structures were partially consumed by flames before the locals managed to appease the fires. There is nothing of value within the broken structures.

Treasure. Defeating False Knight Darmus and his entourage earns the gratitude of the locals and, most importantly, the ruling class in Garius City. For their deeds, the adventurers are rewarded with a parcel of land outside the city, a permit to build, and a payment of 2,500 gold pieces each. 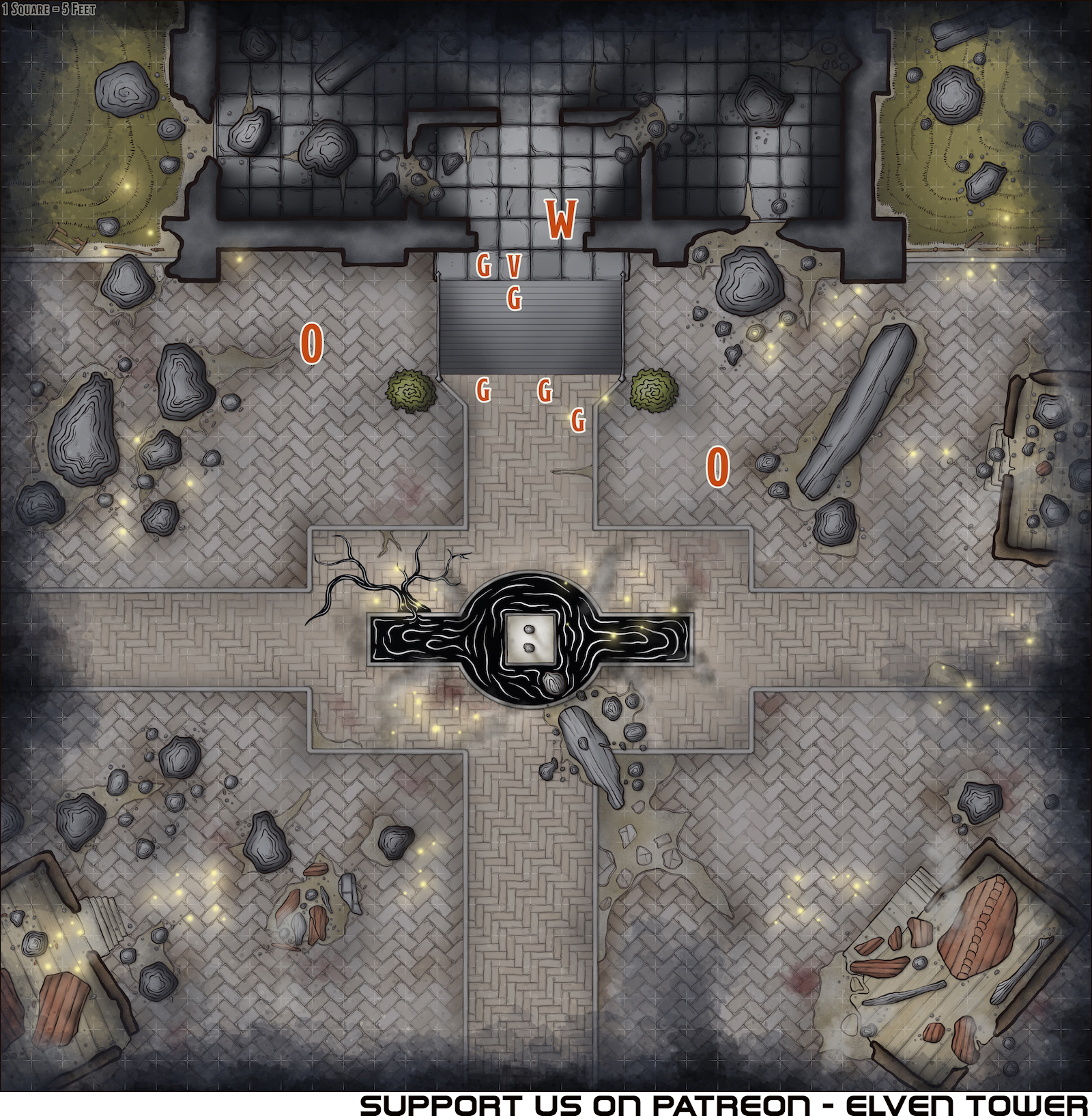