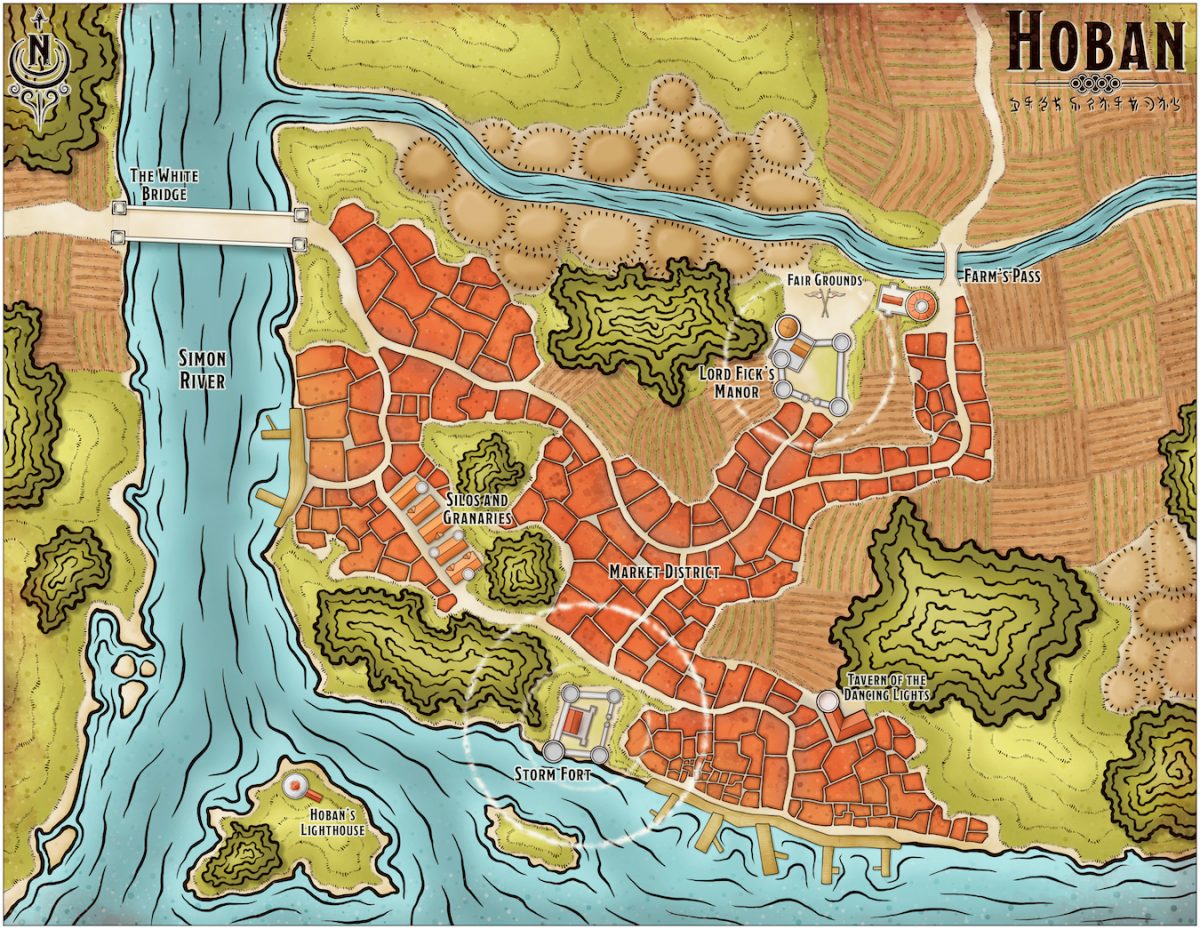 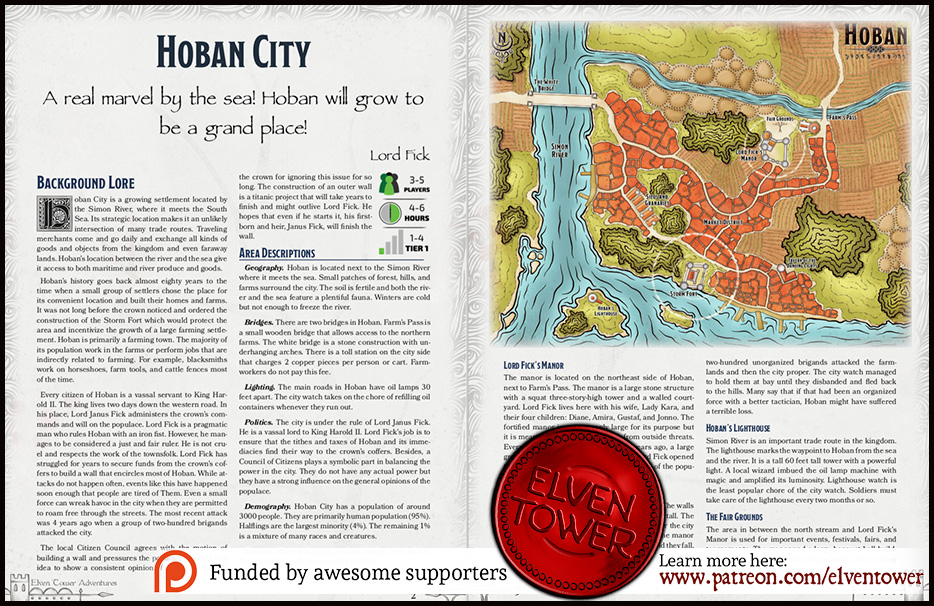 Hoban City is a growing settlement located by the Simon River, where it meets the South Sea. Its strategic location makes it an unlikely intersection of many trade routes. Traveling merchants come and go daily and exchange all kinds of goods and objects from the kingdom and even faraway lands. Hoban’s location between the river and the sea give it access to both maritime and river produce and goods.

Hoban’s history goes back almost eighty years to the time when a small group of settlers chose the place for its convenient location and built their homes and farms. It was not long before the crown noticed and ordered the construction of the Storm Fort which would protect the area and incentivize the growth of a large farming settlement. Hoban is primarily a farming town. The majority of its population work in the farms or perform jobs that are indirectly related to farming. For example, blacksmiths work on horseshoes, farm tools, and cattle fences most of the time.

Every citizen of Hoban is a vassal servant to King Harold II. The king lives two days down the western road. In his place, Lord Janus Fick administers the crown’s commands and will on the populace. Lord Fick is a pragmatic man who rules Hoban with an iron fist. However, he manages to be considered a just and fair ruler. He is not cruel and respects the work of the townsfolk. Lord Fick has struggled for years to secure funds from the crown’s coffers to build a wall that encircles most of Hoban. While attacks do not happen often, events like this have happened soon enough that people are tired of Them. Even a small force can wreak havoc in the city when they are permitted to roam free through the streets. The most recent attack was 4 years ago when a group of two-hundred brigands attacked the city.

The local Citizen Council agrees with the motion of building a wall and pressures the populace to adopt this idea to show a consistent opinion of discontent toward the crown for ignoring this issue for so long. The construction of an outer wall is a titanic project that will take years to finish and might outlive Lord Fick. He hopes that even if he starts it, his firstborn and heir, Janus Fick, will finish the wall.

Geography. Hoban is located next to the Simon River where it meets the sea. Small patches of forest, hills, and farms surround the city. The soil is fertile and both the river and the sea feature a plentiful fauna. Winters are cold but not enough to freeze the river.

Bridges. There are two bridges in Hoban. Farm’s Pass is a small wooden bridge that allows access to the northern farms. The white bridge is a stone construction with underhanging arches. There is a toll station on the city side that charges 2 copper pieces per person or cart. Farmworkers do not pay this fee.

Lighting. The main roads in Hoban have oil lamps 30 feet apart. The city watch takes on the chore of refilling oil containers whenever they run out.

Politics. The city is under the rule of Lord Janus Fick. He is a vassal lord to King Harold II. Lord Fick’s job is to ensure that the tithes and taxes of Hoban and its immediacies find their way to the crown’s coffers. Besides, a Council of Citizens plays a symbolic part in balancing the power in the city. They do not have any actual power but they have a strong influence on the general opinions of the populace.

Demography. Hoban City has a population of around 3000 people. They are primarily human population (95%). Halflings are the largest minority (4%). The remaining 1% is a mixture of many races and creatures.

The manor is located on the northeast side of Hoban, next to Farm’s Pass. The manor is a large stone structure with a squat three-story-high tower and a walled courtyard. Lord Fick lives here with his wife, Lady Kara, and their four children: Diane, Amira, Gustaf, and Jonno. The fortified manor is uncommonly large for its purpose but it is meant to defend the townsfolk from outside threats. Everyone still remembers when, four years ago, a large group of brigands attacked the city and Lord Fick opened the manor gates and allowed a large portion of the population to hide behind the walls.

The fort is located by the sea, next to the docks. The walls of the fort are 30 feet tall and its towers 60 feet tall. The Storm Fort is the house and training grounds for the city watch and a platoon of soldiers. The fort and the manor are the only fortified structures in Hoban. Should they fall, the city would be lost. During the attack, four years ago, two-hundred unorganized brigands attacked the farmlands and then the city proper. The city watch managed to hold them at bay until they disbanded and fled back to the hills. Many say that if that had been an organized force with a better tactician, Hoban might have suffered a terrible loss.

Simon River is an important trade route in the kingdom. The lighthouse marks the waypoint to Hoban from the sea and the river. It is a tall 60 feet tall tower with a powerful light. A local wizard imbued the oil lamp machine with magic and amplified its luminosity. Lighthouse watch is the least popular chore of the city watch. Soldiers must take care of the lighthouse every two months or so.

The area in between the north stream and Lord Fick’s Manor is used for important events, festivals, fairs, and tournaments. The manor and a large banquet hall building overlook the area. Hoban City is known for its many fairs and events throughout the year, even during the winter. The most popular are the three summer tournaments. During each tournament, a long list of competitive activities takes place for three days. Many of these activities are war-related like archery contests, knife-throwing, large melees, jousts, and hand-to-hand combat. Others are more lighthearted like drawing competitions, long-distance jumping, singing, and acting contests. Hoban citizens join faraway travelers in the games and make new friendships, strike deals, sell and buy goods, and have fun.

Jonno Fick, Lord Fick’s firstborn, is a popular lad who won the jousting tournament two years in a row. This year, riders from all over the kingdom have shown up to prove themselves against such a worthy opponent. Will he keep the title of the champion?

Hoban City has a strategic position where many trade routes intersect. Maritime, river, and road routes come together in Hoban and form a hub of trading and negotiation. The market district is a busy place with many permanent stores and stalls but just as many for-rent stalls that change hands several times per month as traveling merchants come and go. There is a local saying in Hoban that goes: “If you see something you like, you better hurry and buy it before the seller packs and leaves”. In that case, you may not see such an item in a year or more, until the merchant eventually returns to Hoban. The rarer the item, the truer this story becomes.

Hoban sends carts of goods to pay tithes to the crown two or three times a year. In the meanwhile, grains, flour, and other long-lasting goods must be stored in the city-watch-protected silos and granaries. Lord Fick places an enormous amount of time and resources to keep the silos well-protected and in good shape. A detachment of the city watch is on permanent duty around the silos.

The reason for this is that the grains and goods are the most important asset in Hoban. Each time the city has been attacked, the attackers try to profit from robbing the silos. The lack of city walls makes this location a vulnerable target. The Citizen Council has complained for years that the lack of a proper city wall is a problem that affects the peasantry the most while the rich bask in their walled manors and the military hide in the fort. Lord Fick agrees with them but the negotiation for enough money to build the walls has stalled for years now. A small group proposes to build a small wall around the silos but the idea has not met much support.

Tavern of the Dancing Lights

This inn/tavern is the largest establishment of its kind in Hoban. It is located in the southeast end of the city, just north of the seaside docks. A suspicious-looking half-elf named Grillaund owns the tavern. Grillaund inherited the place from his elf father twenty years ago. The building was a shoe-making factory back then but Grillaund closed it down, remodeled the place, and turned it into a tavern. The tavern is an L-shaped two-story building with a tall tower-like structure on one end. The top of the tower is Grillaund’s chamber.

The tavern owes its name to the strange magical lights that float and move around the building like disembodied torches. The lights are heatless and ethereal in nature; they provide bright light but Grillaund can dim them down to create a more homely atmosphere. The lights are the result of a binding ritual Grillaund commissioned to Lord Fick’s court wizard. The mage must return and recharge the enchantment every few years when the lights start going too dim to light the place. 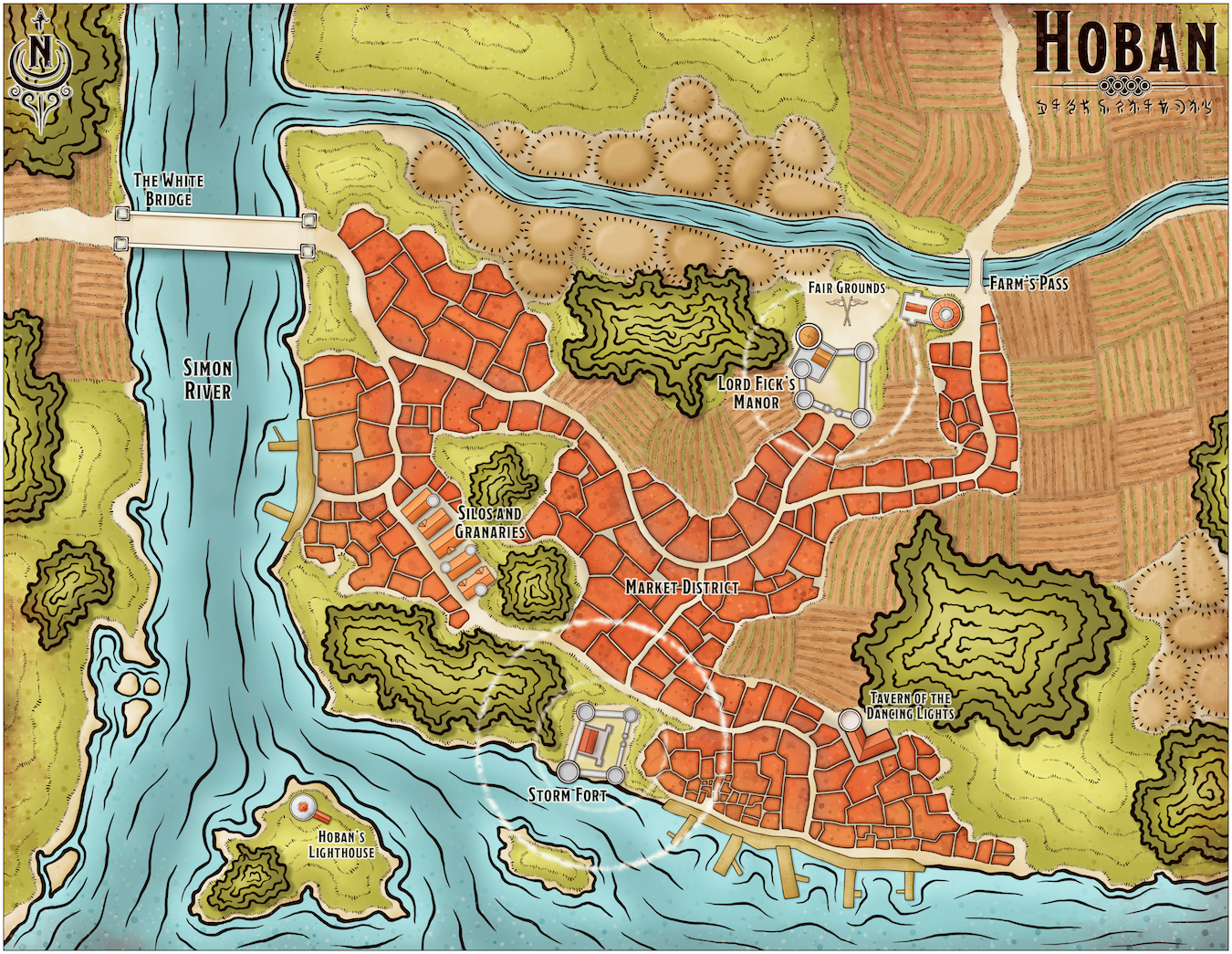