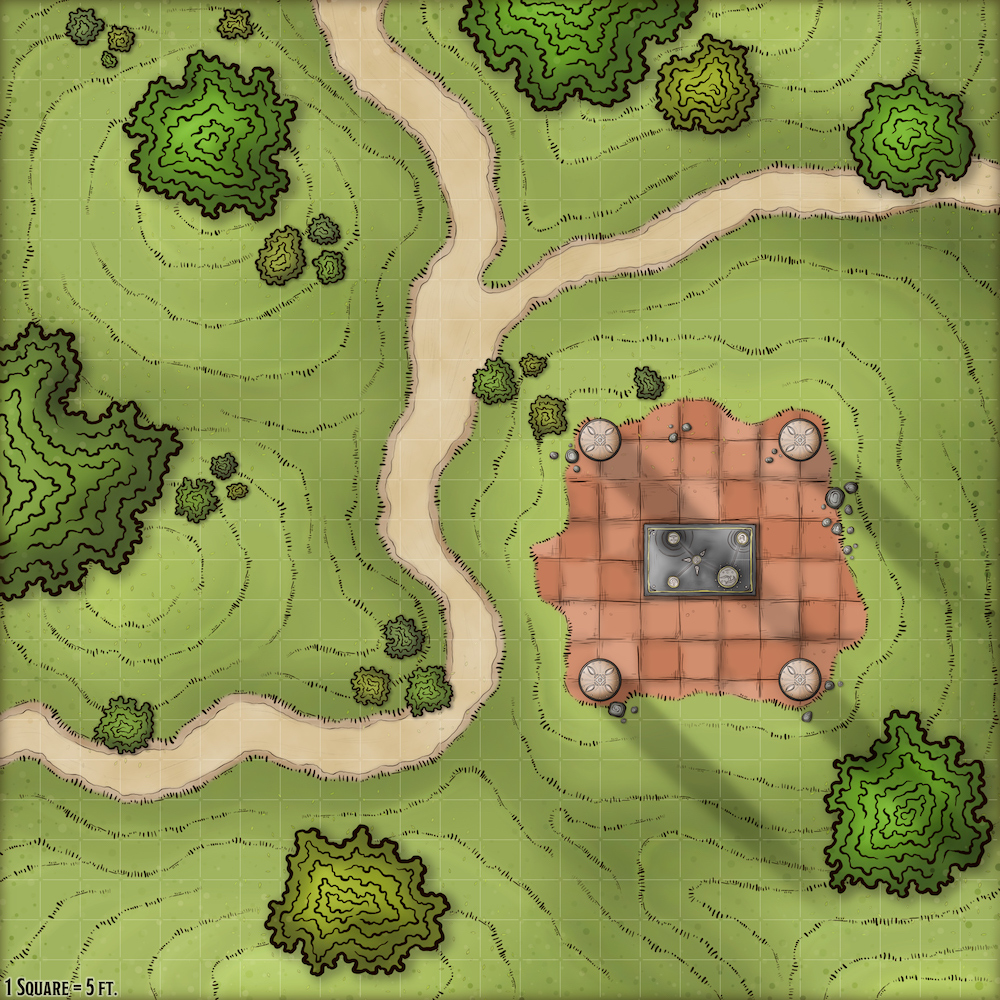 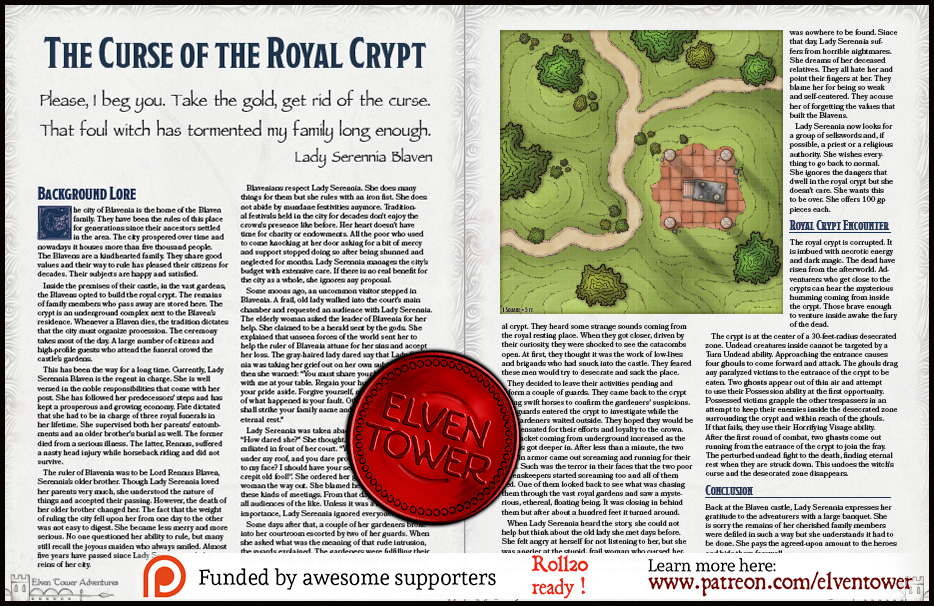 The city of Blavenia is the home of the Blaven family. They have been the rules of this place for generations since their ancestors settled in the area. The city prospered over time and nowadays it houses more than five thousand people. The Blavens are a kindhearted family. They share good values and their way to rule has pleased their citizens for decades. Their subjects are happy and satisfied.

Inside the premises of their castle, in the vast gardens, the Blavens opted to build the royal crypt. The remains of family members who pass away are stored here. The crypt is an underground complex next to the Blaven’s residence. Whenever a Blaven dies, the tradition dictates that the city must organize procession. The ceremony takes most of the day. A large number of citizens and high-profile guests who attend the funeral crowd the castle’s gardens.

This has been the way for a long time. Currently, Lady Serennia Blaven is the regent in charge. She is well versed in the noble responsibilities that come with her post. She has followed her predecessors’ steps and has kept a prosperous and growing economy. Fate dictated that she had to be in charge of three royal funerals in her lifetime. She supervised both her parents’ entombments and an older brother’s burial as well. The former died from a serious illness. The latter, Rennus, suffered a nasty head injury while horseback riding and did not survive.

The ruler of Blavenia was to be Lord Rennus Blaven, Serennia’s older brother. Though Lady Serennia loved her parents very much, she understood the nature of things and accepted their passing. However, the death of her older brother changed her. The fact that the weight of ruling the city fell upon her from one day to the other was not easy to digest. She became less merry and more serious. No one questioned her ability to rule, but many still recall the joyous maiden who always smiled. Almost five years have passed since Lady Serennia took the reins of her city.

Blavenians respect Lady Serennia. She does many things for them but she rules with an iron fist. She does not abide by mundane festivities anymore. Traditional festivals held in the city for decades don’t enjoy the crown’s presence like before. Her heart doesn’t have time for charity or endowments. All the poor who used to come knocking at her door asking for a bit of mercy and support stopped doing so after being shunned and neglected for months. Lady Serennia manages the city’s budget with extensive care. If there is no real benefit for the city as a whole, she ignores any proposal.

Some moons ago, an uncommon visitor stepped in Blavenia. A frail, old lady walked into the court’s main chamber and requested an audience with Lady Serennia. The elderly woman asked the leader of Blavenia for her help. She claimed to be a herald sent by the gods. She explained that unseen forces of the world sent her to help the ruler of Blavenia attune for her sins and accept her loss. The gray-haired lady dared say that Lady Serennia was taking her grief out on her own subjects. And then she warned: “You must share your bread and wine with me at your table. Regain your humbleness and cast your pride aside. Forgive yourself, noble regent, for none of what happened is your fault. Otherwise, a horrible hex shall strike your family name and your kin shall not find eternal rest.”

Lady Serennia was taken aback by such insolence. “How dared she?” She thought. She felt insulted and humiliated in front of her court. “You come to me, you stand under my roof, and you dare pronounce all this nonsense to my face? I should have your senile head on a spike, decrepit old fool!”. She ordered her guards to show the old woman the way out. She blamed herself for still allowing these kinds of meetings. From that day on, she forbade all audiences of the like. Unless it was a matter of high importance, Lady Serennia ignored everyone.

Some days after that, a couple of her gardeners broke into her courtroom escorted by two of her guards. When she asked what was the meaning of that rude intrusion, the guards explained. The gardeners were fulfilling their daily duties when they noticed something odd in the royal crypt. They heard some strange sounds coming from the royal resting place. When they got closer, driven by their curiosity, they were shocked to see the catacombs open. At first, they thought it was the work of low-lives and brigands who had snuck into the castle. They feared these men would try to desecrate and sack the place.

They decided to leave their activities pending and inform a couple of guards. They came back to the crypt riding swift horses to confirm the gardeners’ suspicions. The guards entered the crypt to investigate while the two gardeners waited outside. They hoped they would be compensated for their efforts and loyalty to the crown. The racket coming from underground increased as the guards got deeper in. After less than a minute, the two men in armor came out screaming and running for their lives. Such was the terror in their faces that the two poor greenskeepers started screaming too and all of them fled. One of them looked back to see what was chasing them through the vast royal gardens and saw a mysterious, ethereal, floating being. It was closing in behind them but after about a hundred feet it turned around.

When Lady Serennia heard the story, she could not help but think about the old lady she met days before. She felt angry at herself for not listening to her, but she was angrier at the stupid, frail woman who cursed her. She requested her men to look for her and force her to undo this. The search was in vain; the elderly woman was nowhere to be found. Since that day, Lady Serennia suffers from horrible nightmares. She dreams of her deceased relatives. They all hate her and point their fingers at her. They blame her for being so weak and self-centered. They accuse her of forgetting the values that built the Blavens.

Lady Serennia now looks for a group of sellswords and, if possible, a priest or a religious authority. She wishes everything to go back to normal. She ignores the dangers that dwell in the royal crypt but she doesn’t care. She wants this to be over. She offers 100 gp pieces each.

The royal crypt is corrupted. It is imbued with necrotic energy and dark magic. The dead have risen from the afterworld. Adventurers who get close to the crypts can hear the mysterious humming coming from inside the crypt. Those brave enough to venture inside awake the fury of the dead.

The crypt is at the center of a 30-feet-radius desecrated zone. Undead creatures inside cannot be targeted by a Turn Undead ability. Approaching the entrance causes four ghouls to come forward and attack. The ghouls drag any paralyzed victims to the entrance of the crypt to be eaten. Two ghosts appear out of thin air and attempt to use their Possession ability at the first opportunity. Possessed victims grapple the other trespassers in an attempt to keep their enemies inside the desecrated zone surrounding the crypt and within reach of the ghouls. If that fails, they use their Horrifying Visage ability. After the first round of combat, two ghasts come out running from the entrance of the crypt to join the fray. The perturbed undead fight to the death, finding eternal rest when they are struck down. This undoes the witch’s curse and the desecrated zone disappears.

Back at the Blaven castle, Lady Serennia expresses her gratitude to the adventurers with a large banquet. She is sorry the remains of her cherished family members were defiled in such a way but she understands it had to be done. She pays the agreed-upon amount to the heroes and bids them farewell.