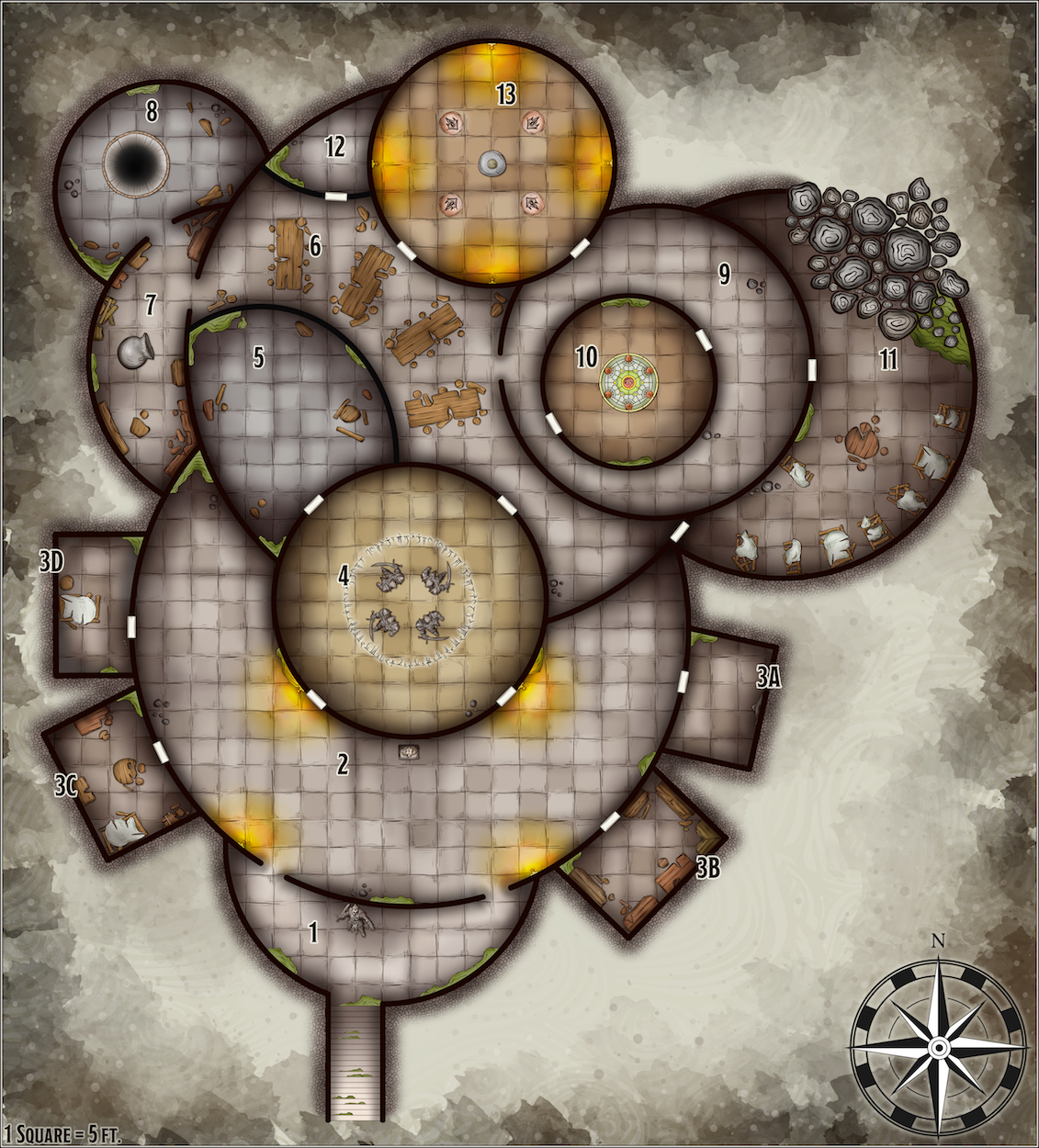 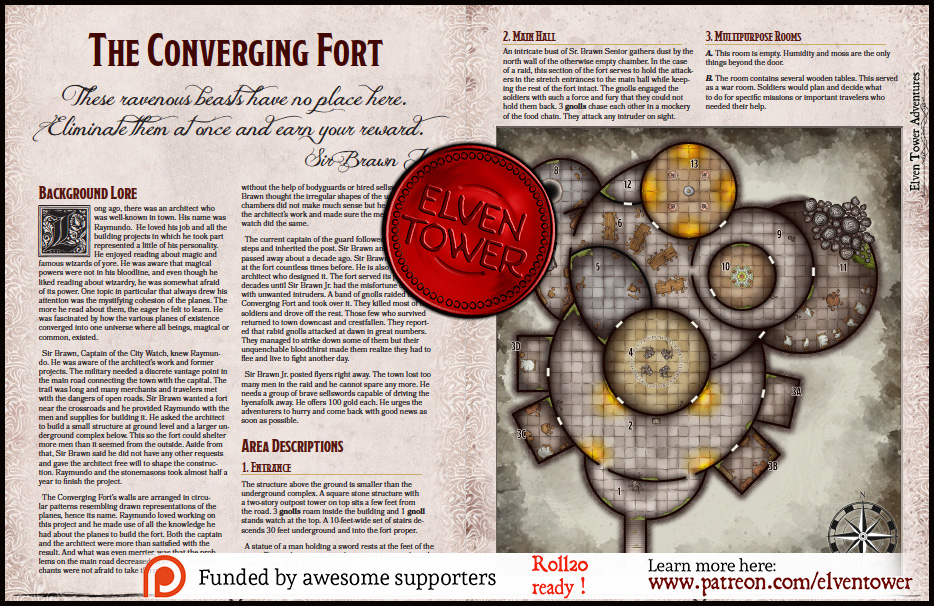 Long ago, there was an architect who was well-known in town. His name was Raymundo.  He loved his job and all the building projects in which he took part represented a little of his personality. He enjoyed reading about magic and famous wizards of yore. He was aware that magical powers were not in his bloodline, and even though he liked reading about wizardry, he was somewhat afraid of its power. One topic in particular that always drew his attention was the mystifying cohesion of the planes. The more he read about them, the eager he felt to learn. He was fascinated by how the various planes of existence converged into one universe where all beings, magical or common, existed.

Sir Brawn, Captain of the City Watch, knew Raymundo. He was aware of the architect’s work and former projects. The military needed a discrete vantage point in the main road connecting the town with the capital. The trail was long and many merchants and travelers met with the dangers of open roads. Sir Brawn wanted a fort near the crossroads and he provided Raymundo with the men and supplies for building it. He asked the architect to build a small structure at ground level and a larger underground complex below. This so the fort could shelter more men than it seemed from the outside. Aside from that, Sir Brawn said he did not have any other requests and gave the architect free will to shape the construction. Raymundo and the stonemasons took almost half a year to finish the project.

The Converging Fort’s walls are arranged in circular patterns resembling drawn representations of the planes, hence its name. Raymundo loved working on this project and he made use of all the knowledge he had about the planes to build the fort. Both the captain and the architect were more than satisfied with the result. And what was even merrier, was that the problems on the main road decreased. Travelers and merchants were not afraid to take the main road anymore without the help of bodyguards or hired sellswords. Sir Brawn thought the irregular shapes of the underground chambers did not make much sense but he respected the architect’s work and made sure the members of the watch did the same.

The current captain of the guard followed his father’s steps and inherited the post. Sir Brawn and Raymundo passed away about a decade ago. Sir Brawn Jr. had been at the fort countless times before. He is also aware of the architect who designed it. The fort served its purpose for decades until Sir Brawn Jr. had the misfortune of dealing with unwanted intruders. A band of gnolls raided the Converging Fort and took over it. They killed most of the soldiers and drove off the rest. Those few who survived returned to town downcast and crestfallen. They reported that rabid gnolls attacked at dawn in great numbers. They managed to strike down some of them but their unquenchable bloodthirst made them realize they had to flee and live to fight another day.

Sir Brawn Jr. posted flyers right away. The town lost too many men in the raid and he cannot spare any more. He needs a group of brave sellswords capable of driving the hyenafolk away. He offers 100 gold each. He urges the adventurers to hurry and come back with good news as soon as possible.

The structure above the ground is smaller than the underground complex. A square stone structure with a two-story outpost tower on top sits a few feet from the road. 3 gnolls roam inside the building and 1 gnoll stands watch at the top. A 10-feet-wide set of stairs descends 30 feet underground and into the fort proper.

A statue of a man holding a sword rests at the feet of the stairs. Two archways connect the crescent-moon-shaped room to the Main Hall of the fort.

An intricate bust of Sr. Brawn Senior gathers dust by the north wall of the otherwise empty chamber. In the case of a raid, this section of the fort serves to hold the attackers in the stretch entrances to the main hall while keeping the rest of the fort intact. The gnolls engaged the soldiers with such a force and fury that they could not hold them back. 3 gnolls chase each other in a mockery of the food chain. They attack any intruder on sight.

A. This room is empty. Humidity and moss are the only things beyond the door.

B. The room contains several wooden tables. This served as a war room. Soldiers would plan and decide what to do for specific missions or important travelers who needed their help.

C. This room contains some of the beds that the military men used. They are all torn and broken. A successful DC 13 Wisdom (Perception) check reveals 25 gold pieces stored in a leather pouch below a mattress that the gnolls had not found.

D. The commander in office’s quarters. This was an individual bedroom with a single bed accompanied by a couple of tables and a chest. Everything was destroyed by the gnolls. 1 gnoll rests on the bed. Fight sounds from Area 2 startle it and cause it to join the confrontation. A successful DC 13 Wisdom (Perception) check reveals a hidden compartment in the chest containing two healing potions.

This is the only connection between the Main Hall (Area 2) and the rest of the fort. There are four decorative suits of armor assembled on top of lean stone structures in the center of the circular chamber. They point at a door each. A successful DC 10 Wisdom (Perception) check reveals that the swords held by the armors can be removed. They are regular longswords.

What once was the place for several kegs and wooden boxes is now almost empty. Soldiers kept non-perishable food and other supplies such as blankets, weapons, and pieces of armor. The gnolls have taken most of it and left the place in shambles. Pieces of wood from different pieces of furniture lie scattered across the floor.

Four large wooden tables flanked by four stools on each side dominate the room. The circular shapes of the rooms surrounding the dining room cause it to have an irregular and disorienting shape. The soldiers made the most of its available spaces and accommodated their breakfast nook. Few of the wooden furnishings survived the raid. Most wood items are splintered and beaten.  4 gnolls dance and celebrate their victory on the tables.

The entrance to the kitchen does not have a door. It has a direct connection to the Dining Room (Area 6). As the room beside it, the kitchens suffered the same fate. The gnolls smashed the wooden tables and shelves. They wrecked everything. In the center of the room, toppled on the floor, is a cauldron. Soldiers used to cook broths that lasted for days. Whenever the cook ran out of soup, he just added more ingredients and reutilized it.

The gnolls have eaten all perishable food as well. The kitchens are also connected to the depot. A large refuse disposal dominates the center of the room. Soldiers throw garbage and anything they do not need anymore in here. All discarded items end up in an underground river. Planks, rocks, and debris litter the rest of the room all around.

There are several signs of a battle here. Walls are scratched and full of claw marks. Bloodstains are more present here. A successful DC 13 Wisdom (Medicine) check reveals this was the soldiers’ last stand. Pieces of armor and clothing lay motionless on the ground.

The circular-shaped room has a depiction on the floor. It is a representation of the planes taken from one of Raymundo’s books. It is one of many variations known by scholars. Raymundo hired a painter to leave a permanent reminder of what the structure represents. Sir Brawn Jr. did not mind this since it does not affect everyday tasks. The northwest section of the wall has a precise fresco of the Converging Fort. A gnoll defiled a section of the fresco and scripted some illegible nonsense with blood but most of the painting remains untouched. A successful DC 14 Intelligence (Arcana) check reveals Raymundo did not quite succeed in his desire to build the fort as a representation of the planes. He misinterpreted some of the relationships and the links of the planes. The mistakes are clear for a person versed in the multiverse. Raymundo’s truncated view of the world from his lack of arcane studies is the reason why the fort does not convey what he intended. It is nothing but a sorry attempt to replicate a map of the planes.

This room was the resting place of most of the soldiers on duty. Their beds, like everything else in the fort, are shattered and broken. Filthy linens and bloodstains remain as evidence of what happened a few days ago. The table in the center was broken into several pieces, now scattered on the floor. North of the room, a mountain of rocks and boulders collapsed and blocked the way.

The Converging Fort has another level deeper underground. However, this is a part of the fort that Sir Brawn Jr. does not know. The cave-in happened long before he acquired his post. The rocks are so large and the rooms below so unimportant that taking care of this was always delayed.

There are 5 gnolls in this area. A successful DC 13 Wisdom (Perception) check reveals some hidden belongings that the gnolls did not find. Silverware and a couple of gems with a collective value of 100 gold pieces.

The gnolls have not breached this room. They got so distracted by the kitchens and all the food stored that they missed it. The door is locked. A successful DC 14 Dexterity (Thieves Tools) check allows a character to open it. The room appears to be empty at first. A successful DC 15 Wisdom (Perception) check reveals a loose tile on the floor. There are 200 gold pieces of treasure in here.

This circular room was used to hold conferences and meetings. The commander in office ordered his men to leave the room unfurnished. His meetings were always cut to the chase and he intended to keep it that way. He thought tables and chairs would only make the attendees comfortable, which could lead to longer reunions.

Terrain. The stone tiles of the fort are worn and dirty. The soldiers do not do much cleaning while they are on duty. The place is humid and there is moss growing all over the floor and walls.

Doors. All doors are made of wood. Most of them have claw marks and splinters. Both of the southern doors that take to the central chamber (Area 4) were rammed and almost destroyed.

Smells and Sounds. The fort smells of humid, warm air, with a tinge of blood. The kitchen and the dining room have a faint scent of broth and food.

Signs of Recent Battle. Some of the walls are scratched with claw marks. The furniture shows evidence of the battle as well. There are bloodstains in many areas of the fort. There are no signs of dead bodies since the gnolls ate them all, only their bent armors and filthy clothes remain.