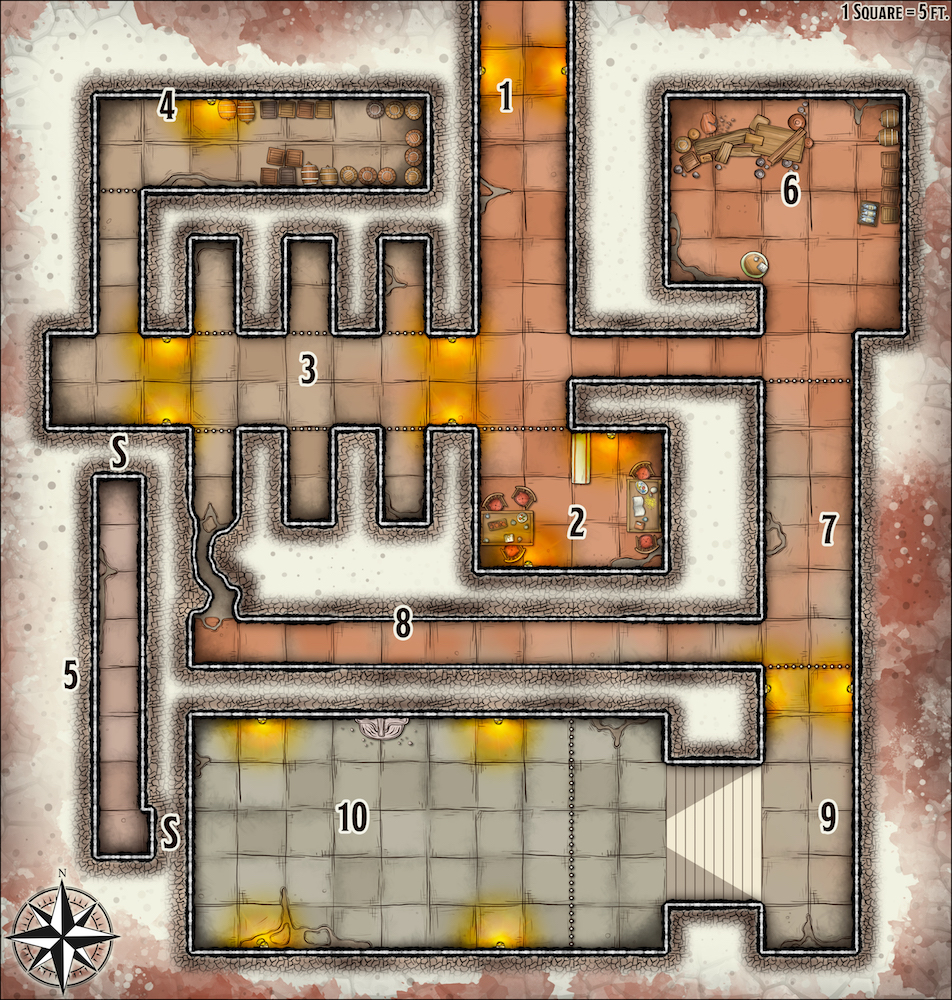 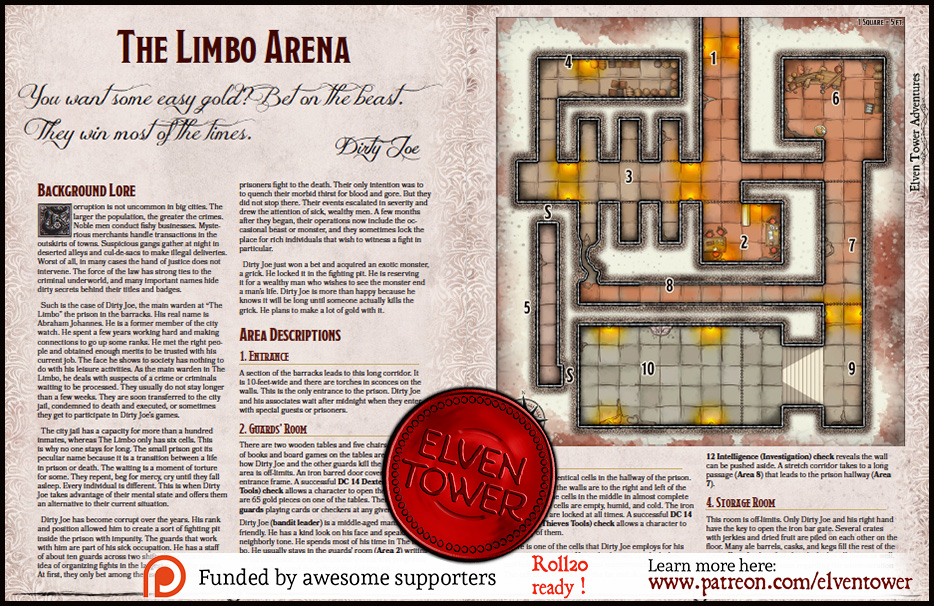 Corruption is not uncommon in big cities. The larger the population, the greater the crimes. Noblemen conduct fishy businesses. Mysterious merchants handle transactions on the outskirts of towns. Suspicious gangs gather at night in deserted alleys and cul-de-sacs to make illegal deliveries. Worst of all, in many cases, the hand of justice does not intervene. The force of the law has strong ties to the criminal underworld, and many important names hide dirty secrets behind their titles and badges.

Such is the case of Dirty Joe, the main warden at “The Limbo” the prison in the barracks. His real name is Abraham Johannes. He is a former member of the city watch. He spent a few years working hard and making connections to go up some ranks. He met the right people and obtained enough merits to be trusted with his current job. The face he shows to society has nothing to do with his leisure activities. As the main warden in The Limbo, he deals with suspects of a crime or criminals waiting to be processed. They usually do not stay longer than a few weeks. They are soon transferred to the city jail, condemned to death and executed, or sometimes they get to participate in Dirty Joe’s games.

The city jail has a capacity for more than a hundred inmates, whereas The Limbo only has six cells. This is why no one stays for long. The small prison got its peculiar name because it is a transition between a life in prison or death. The waiting is a moment of torture for some. They repent, beg for mercy, cry until they fall asleep. Every individual is different. This is when Dirty Joe takes advantage of their mental state and offers them an alternative to their current situation.

Dirty Joe has become corrupt over the years. His rank and position allowed him to create a sort of fighting pit inside the prison with impunity. The guards that work with him are part of his sick occupation. He has a staff of about ten guards across two shifts. They share the idea of organizing fights in the largest cell of the prison. At first, they only bet among themselves and had two prisoners fight to the death. Their only intention was to quench their morbid thirst for blood and gore. But they did not stop there. Their events escalated in severity and drew the attention of sick, wealthy men. A few months after they began, their operations now include the occasional beast or monster, and they sometimes lock the place for rich individuals that wish to witness a fight in particular.

Dirty Joe just won a bet and acquired an exotic monster, a grick. He locked it in the fighting pit. He is reserving it for a wealthy man who wishes to see the monster end a man’s life. Dirty Joe is more than happy because he knows it will be long until someone actually kills the grick. He plans to make a lot of gold with it.

A section of the barracks leads to this long corridor. It is 10-feet-wide and there are torches in sconces on the walls. This is the only entrance to the prison. Dirty Joe and his associates wait after midnight when they enter with special guests or prisoners.

There are two wooden tables and five chairs. A couple of books and board games on the tables are evidence of how Dirty Joe and the other guards kill the time. This area is off-limits. An iron barred door covers the 10-feet entrance frame. A successful DC 14 Dexterity (Thieves Tools) check allows a character to open the door. There are 65 gold pieces on one of the tables. There are 4 guards playing cards or checkers at any given time.

Dirty Joe (bandit leader) is a middle-aged man. He looks friendly. He has a kind look on his face and speaks in a neighborly tone. He spends most of his time in The Limbo. He usually stays in the guards’ room (Area 2) writing on his notebook. He organizes the events and programs the days they need the cells or the fighting pit.

There are six identical cells in the hallway of the prison. The torches on the walls are to the right and left of the cells, leaving the cells in the middle in almost complete darkness. The cells are empty, humid, and cold. The iron barred doors are locked at all times. A successful DC 14 Dexterity (Thieves Tools) check allows a character to open any of them.

There is one of the cells that Dirty Joe employs for his corrupt occupations. He is also known to take bribes and help a few of the criminal masterminds in the city. The cell has a fake wall at the far end. A successful DC 12 Intelligence (Investigation) check reveals the wall can be pushed aside. A stretch corridor takes to a long passage (Area 8) that leads to the prison hallway (Area 7).

This room is off-limits. Only Dirty Joe and his right hand have the key to open the iron bar gate. Several crates with jerkies and dried fruit are piled on each other on the floor. Many ale barrels, casks, and kegs fill the rest of the room. Dirty Joe has this place locked at all times as well. He takes on a serious tone regarding the administration of his alcohol.

There is a secret passage that connects the cells’ section (Area 3) with the fighting pit (Area 10). Both accesses to this corridor are hidden. Dirty Joe and his men know what brick on the wall to push to enter. A successful DC 14 Wisdom (Perception) check reveals the loose brick on the wall.

Dirty Joe does not care for this room of the prison. Since there are no iron bars to keep this room from other guards or visitors, he keeps nothing of value in here. Empty wooden boxes and kegs litter one side of the room. Broken tables and planks piled upon each other take most of the space on the floor.

This 10-feet-wide hallway is the only way to reach the fighting pit (Area 10). The wealthy people that pay Dirty Joe to see bloody fights come this way.

The fake cell with a hidden exit leads to this long corridor. Dirty Joe still maintains control over whoever was put in that cell since the only way to exit the prison is through the iron barred gate on the north side of Area 7. Dirty Joe and his associates manipulate information and reports to keep their operations going. They forge documents and alter the written reports they send to the city guard regarding the inmates.

Only people accompanied by Dirty Joe or the prison guards are allowed here. After descending a short flight of stairs, people can witness the clandestine fights of the prison. The wide stairs serve as stands. More people can sit on the floor in front of the stairs to have a better look. Whenever Dirty Joe has an event, his guards bring cups of wine and mugs of ale. They overprice them as if they were the last alcoholic beverages in the city and make a lot of gold with it. One of the guards plays the role of bookie and keeps tabs on the bets. Since Dirty Joe locks the door behind them every time they foster an event, they never have problems collecting the money from losers and keeping order.

This is the largest room in the prison. It is 25-feet-wide and 50-feet-long. An iron barred gate divides the fighting area from the area near the stairs where the guards and wealthy individuals watch. Four torches on sconces light the place. There is a grick kept in here. It is Dirty Joe’s next attraction and he intends to earn lots of gold from it.

Dirty Joe and his men use the secret passage (Area 5) to make more exciting the entrance of monsters or participants of the arena.

Terrain. The prison is humid and cold. The stone tiles on the floor are worn and old. There is moss growing in some sections of the prison, especially in the storage rooms.

Doors. Iron barred gates divide most sections of the prison. A successful DC 14 Dexterity (Thieves Tools) check allows a character to open any of them.

Light. Torches on sconces are present in every room of the prison but the stockpile (Area 6).

Smells and Sounds. The cells smell bad. A strong, humid scent of sweat predominates in them. The storage room and the guards’ room smell of ale and food. The fighting pit has a strong, pungent smell of blood.