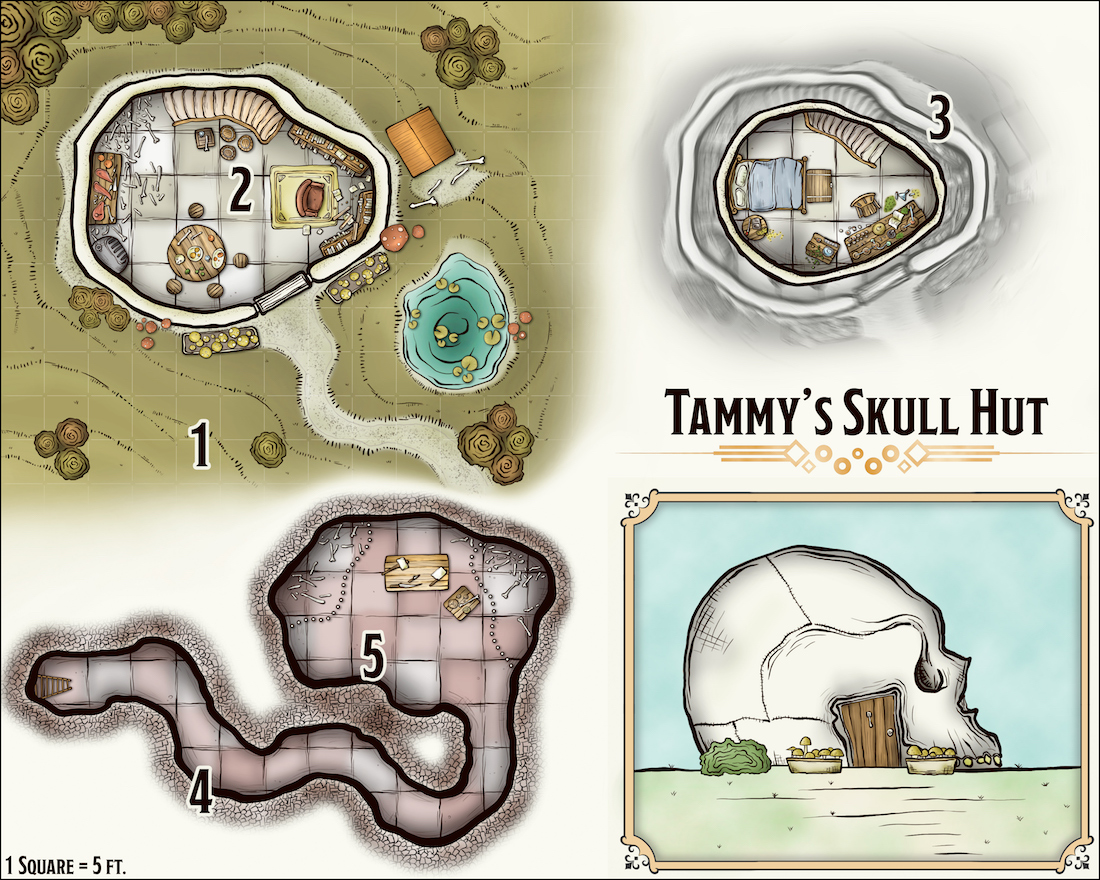 The inhabitants of Grenyi Town are worried and scared of the strange woman in the forest. Some of them say she is the devil. Others come up with names for her and call her a hag, a witch, a demon, or a monster. But a few brave ones think she is an angel of sorts, a receptacle of power from beyond the veil. The woman in the forest is Tammy. She is as real as the trees surrounding her strange house. The stories about her are also grounded in truth. She is an accomplished spellcaster with a strong command of the weave but, for all intents and purposes, she is an evil force in the region. She is Tammy, the hag.

The ones who hate her or fear her base their feelings on Tammy’s crimes and atrocities during the past fifty years. Tammy has kidnapped many children, stolen livestock, and killed creatures in the forest to harvest their body parts. She has also killed the few brave ones who have dared oppose her from time to time. She is not a person to reason with. One must either agree to her dangerous behavior or confront her and face death as the consequence. None of the outcomes suits the fearful villagers but they have had no other choice for generations.

A few people feel a strange affinity toward Tammy and even worship her in secret. It is known that Tammy is a powerful healer as well as a force of evil. Contrary to common belief, a few people have dared visit her skull hut unarmed and asked for her aid. Tammy is less aggressive toward visitors, she is tolerant of them. When a person comes and asks for help she always offers a cup of tea and listens to their problem. Often Tammy can come up with a miraculous cure with her magic or an improvised concoction.

But all favors have a cost, she always says. As the man who lost his sight in an accident and came for help. She healed his eyes but took away his voice as payment. The man agreed. A little girl fell sick to a summer disease and nearly died but her mother brought her to the hag, her last option. The hag offered to heal the girl in exchange for ten years of the mother’s lifespan. She agreed and the girl recovered.

But the strangest case is that of Gilderoy, the vagrant. He roams the streets in the company of his twelve-year-old son. He tells the story of how he used to be the Town Major two years ago. He claims his son got lost in the forest and a pack of wolves killed him before the rescue party could help. Major Gilderoy, struck with grief, came to Tammy and asked for her help. “Could she revive his son?” he wondered. And Tammy said that she could, but the cost was high. Gilderoy said he would pay anything. The hag had only to set the price. And so she explained that he would have to step down from his position of privilege and live the rest of his life among the peasantry. The man agreed and the young boy opened his eyes once more. When he came back to town and tried to enter his manor, the guards claimed they did not know him and threatened to call the major. It did not take long for Gilderoy to understand what had happened. Somehow, as difficult to believe as it sounds, the evil hag had erased him and his son from existence. No person in town had any recollection of who Gilderoy was. He lost everything. Even documents and papers that proved his identity and place in the nobility have disappeared. Town Major Gilderoy is nothing but a shadow. That is what the vagrant in town argues. No one believes there could be a sliver of truth in that story. But certainly, if someone were capable of doing that, it would be Tammy.

People shun the idea of asking the hag for help. They know a few individuals have done it and paid a terrible price. Most people can point the general direction to Tammy’s hut, though very few of them approach it.

Tammy’s hut is based inside a colossal skull. The large skull is large enough for two small stories inside. The skull appears to be humanoid but its shape defies all kinds of creatures known to men. It is too large even for giants. Upon closer inspection, the eroded bone walls reveal that the skull must be millennia old. Whatever it was, it died long, long ago. There is a wooden door on the right side of the skull. Two horizontal fungal pot farms flank the door.

In a clearing, a colossal humanoid skull stands half-buried in the soil. The exposed part is fifteen-feet tall. A medium-sized wooden door on the side of the skull defies the ancient nature of the scene. Two pots with fungal growths flank the door. A successful DC 16 Intelligence (Arcana) check reveals that no living giant is large enough for such a skull. Perhaps an ancient ancestor is the only possibility. There is a shallow pond of knee-high murky water next to the skull. A few small fish swim around and hide under the floating lily pads.

There is a small pet house next to the skull and the pond. Several large gnawed bones lie scattered around it. Lino lives here. It is a half-sentient wolf and Tammy’s pet. Lino used to be a farm stable boy. Tammy kidnapped him years ago and turned him into a loyal servant.

If an adventurer knocks on the door, there is a 50% chance that Tammy is in the main chamber. Otherwise, she is downstairs in the cells’ room. Tammy answers the door and asks for their business with her. She is not aggressive, only a little bad-mouthed and ill-tempered. If the adventurers have a favor to ask or need healing, Tammy listens carefully and names a punishing price to pay. If the adventurers choose to attack Tammy (night hag), she becomes violent and calls Lino (medium-sized dire wolf) to her side to fight. If Tammy succeeds, she traps any remaining survivors in the cells (Area 5).

Tammy’s sense of self-preservation is strong. If the odds turn against her, she casts dimension door to retreat. Tracking her through the forest should be difficult enough to deter any attempts to follow her, or so she thinks.

The inside of the skull is cramped and eerie. The low ceiling causes a feeling of claustrophobia in most creatures. There is a sizable but disorganized personal library by the east corner that takes up almost half the room, a few crates here and there, a table with half-finished plates on it, a coal stove, and a table with several chunks of meat on it. The library is composed of literary classics from the past, treatises on how to cook different forest animals, and some of Tammy’s self-authored books. Her books are mostly about skinning and eating humanoid creatures and spells to bind them and turn them into faithful servants. Most of the arcane secrets depicted in these books are not available to humanoid spellcasters, they make use of the magical abilities reserved to creatures such as hags.

The meat on the table is cut in irregular chunk-sizes. A successful DC 14 Intelligence (Nature) check reveals that some of the meat comes from a large mammal creature, like a bear. But some of the other meat belongs to a humanoid.

The yellow rug by the library hides a trapdoor to the basement. The trapdoor is locked (see sidebar).

Following the irregular stretch of stairs leads to Tammy’s room. Tammy does not allow visitors to come up here. If she is present when a person decides to go up the stairs, she attacks immediately. There is a bed with a wooden bed-frame, a night table, a chest, and an alchemy laboratory. The chest contains 120 gold coins and strange charms, amulets, and necklaces. Most of them fashioned from bone pieces. A few of them reveal magical auras but their uses remain in shadows.

The alchemy laboratory spawns two wooden tables and has all of the important utensils and tools to prepare potions and alchemical substances. Tammy does not keep an inventory of prepared substances. Instead, the only things of value are the different ingredients and components.

A hand-ladder descends twenty-feet to a dark tunnel that winds in no fixed direction for about seventy-feet before opening up to a larger chamber (Area 5).

This is a large chamber of an irregular shape with two improvised cages. The cage bars appear to be trunks of a bamboo-like plant. The bamboo-sticks are buried into the ground and tied together with rope. A successful DC 16 Strength (Athletics) check allows a character to crack the bars in a section of the cage to open a way out. Dealing 15 points of damage to the cage (AC 12) destroys it. The daughter of a hunter is in the west cage. She is in a state of shock but unharmed.

If Tammy is in the area and the adventurers arrive, she takes offense that they trespassed her home but still chooses to hear them if they came for help. She is cautious here because of the kidnapped girl. A fight is sure to break out.

If Tammy dies and Lino is still around, the magic that turned him into a wolf recedes. Lino was five-years-old when Tammy took him. When the magic spell stops, Lino returns to human form but he has aged considerably, he is now a twelve-year-old boy.

Lino’s mind is crippled. He lacks any social skills and has no language. Anything he learned before his transformation is gone. The boy continues to behave like a canine beast. It is up to the DM to determine whether the boy can fully recover, perhaps a Greater Restoration spell is all that is needed to return the boy to normal. But even this option would return him to his former 5-year-old self.

Tammy’s skull hut is located three hours into the forest in an empty clearing.

Terrain. The area around Tammy’s hut features a few trees and a knee-tall pond. Inside, stone tiles cover the floor. Any 5-feet square with an object or a piece of furniture is considered difficult terrain for the purposes of tactical movement.

Doors. The door is unlocked. A short section of rope tied to the inner handle is the only means of security. The trapdoor to the basement is closed with a standard lock. A character can bypass the lock with a DC 14 Dexterity (Thieves Tools) check.

Light. Inside the hut, the light that filters through the orifices in the giant skull provides dim-light. The basement is in complete darkness.

Smells and Sounds. A smell of salted meat, fresh greenery, murky water, and fungal essences surrounds the hut. The natural sounds of the forest are muted in the clearing.