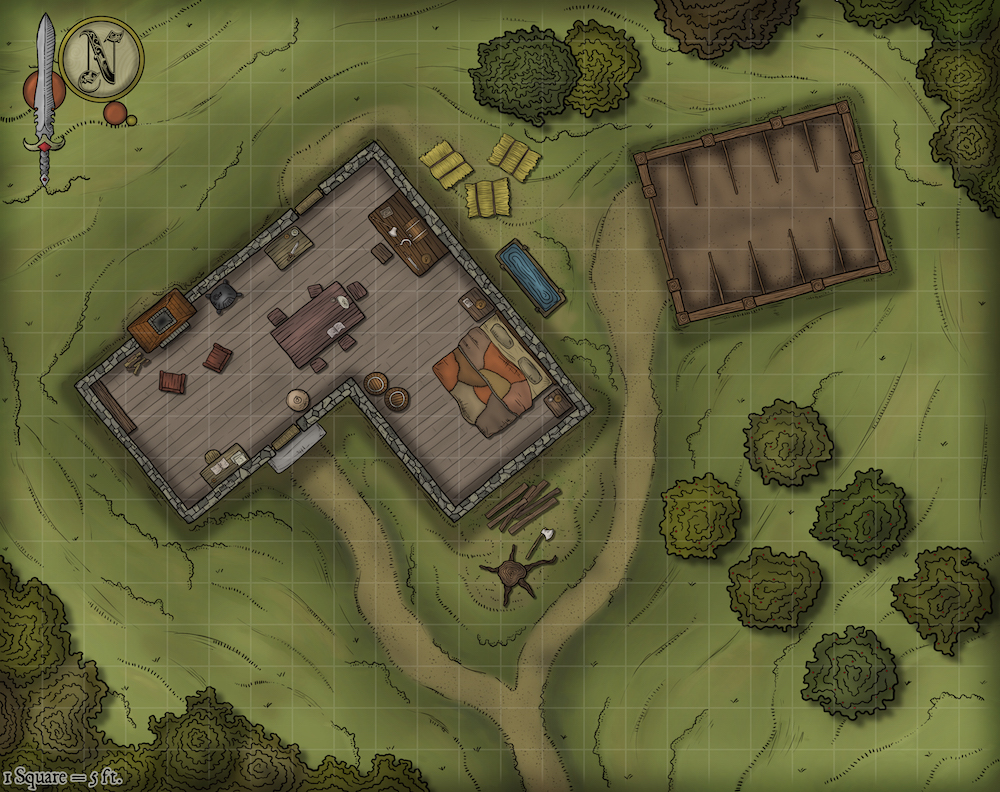 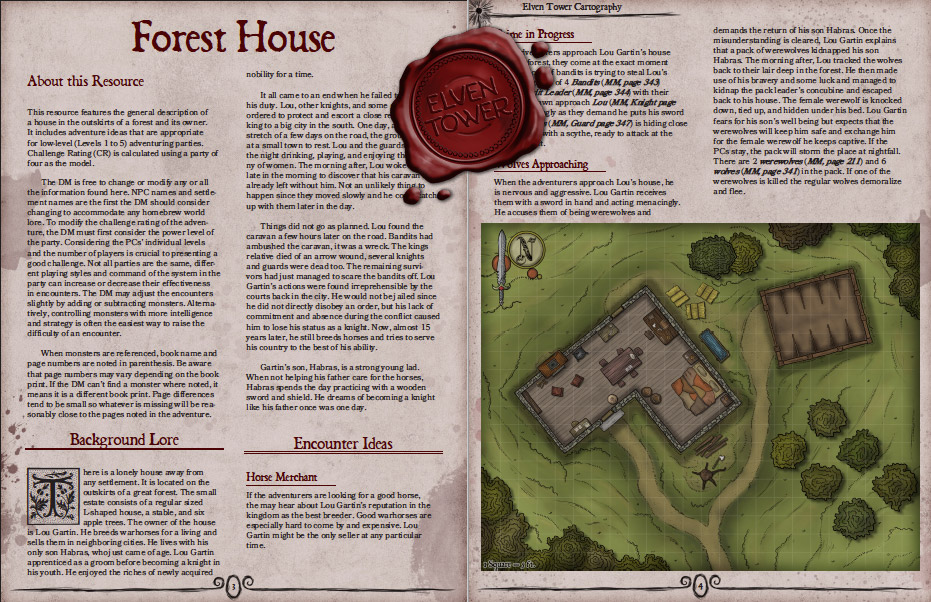 This resource features the general description of a house in the outskirts of a forest and its owner. It includes adventure ideas that are appropriate for low-level (Levels 1 to 5) adventuring parties. Challenge Rating (CR) is calculated using a party of four as the model.

There is a lonely house away from any settlement. It is located on the outskirts of a great forest. The small estate consists of a regular sized L-shaped house, a stable, and six apple trees. The owner of the house is Lou Gartin. He breeds warhorses for a living and sells them in neighboring cities. He lives with his only son Habras, who just came of age. Lou Gartin apprenticed as a groom before becoming a knight in his youth. He enjoyed the riches of newly acquired nobility for a time.

It all came to an end when he failed to perform his duty. Lou, other knights, and some guards were ordered to protect and escort a close relative of the king to a big city in the south. One day, after a long stretch of a few days on the road, the group stopped at a small town to rest. Lou and the guards spend the night drinking, playing, and enjoying the company of women. The morning after, Lou woke up very late in the morning to discover that his caravan had already left without him. Not an unlikely thing to happen since they moved slowly and he could catch up with them later in the day.

Things did not go as planned. Lou found the caravan a few hours later on the road. Bandits had ambushed the caravan, it was a wreck. The kings relative died of an arrow wound, several knights and guards were dead too. The remaining survivors had just managed to scare the bandits off. Lou Gartin’s actions were found irreprehensible by the courts back in the city. He would not be jailed since he did not directly disobey an order, but his lack of commitment and absence during the conflict caused him to lose his status as a knight. Now, almost 15 years later, he still breeds horses and tries to serve his country to the best of his ability.

Gartin’s son, Habras, is a strong young lad. When not helping his father care for the horses, Habras spends the day practicing with a wooden sword and shield. He dreams of becoming a knight like his father once was one day.

If the adventurers are looking for a good horse, the may hear about Lou Gartin’s reputation in the kingdom as the best breeder. Good warhorses are especially hard to come by and expensive. Lou Gartin might be the only seller at any particular time.

If the adventurers approach Lou Gartin’s house near the forest, they come at the exact moment when a group of bandits is trying to steal Lou’s horses. A group of 4 Bandits (MM, page 343) and 1 Bandit Leader (MM, page 344) with their weapons drawn approach Lou (MM, Knight page 347) menacingly as they demand he puts his sword down. Habras (MM, Guard page 347) is hiding close to the stable with a scythe, ready to attack at the best moment.

When the adventurers approach Lou’s house, he is nervous and aggressive. Lou Gartin receives them with a sword in hand and acting menacingly. He accuses them of being werewolves and demands the return of his son Habras. Once the misunderstanding is cleared, Lou Gartin explains that a pack of werewolves kidnapped his son Habras. The morning after, Lou tracked the wolves back to their lair deep in the forest. He then made use of his bravery and some luck and managed to kidnap the pack leader’s concubine and escaped back to his house. The female werewolf is knocked down, tied up, and hidden under his bed. Lou Gartin fears for his son’s well being but expects that the werewolves will keep him safe and exchange him for the female werewolf he keeps captive. If the PCs stay, the pack will storm the place at nightfall. There are 2 werewolves (MM, page 211) and 6 wolves (MM, page 341) in the pack. If one of the werewolves is killed the regular wolves demoralize and flee. 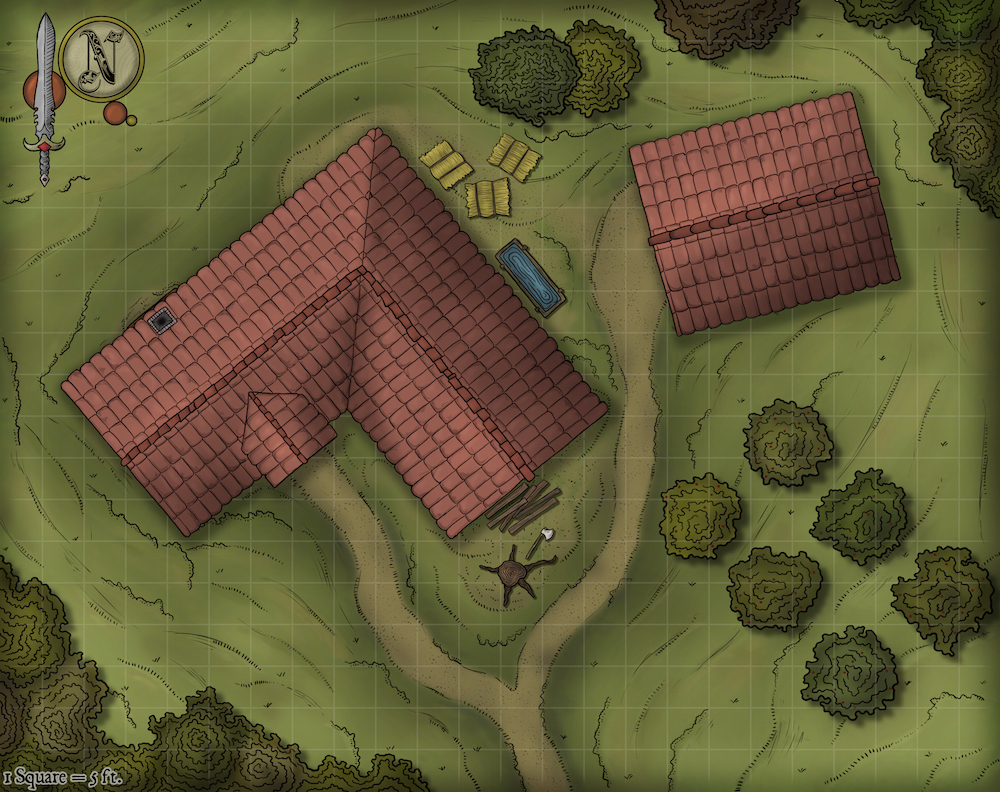