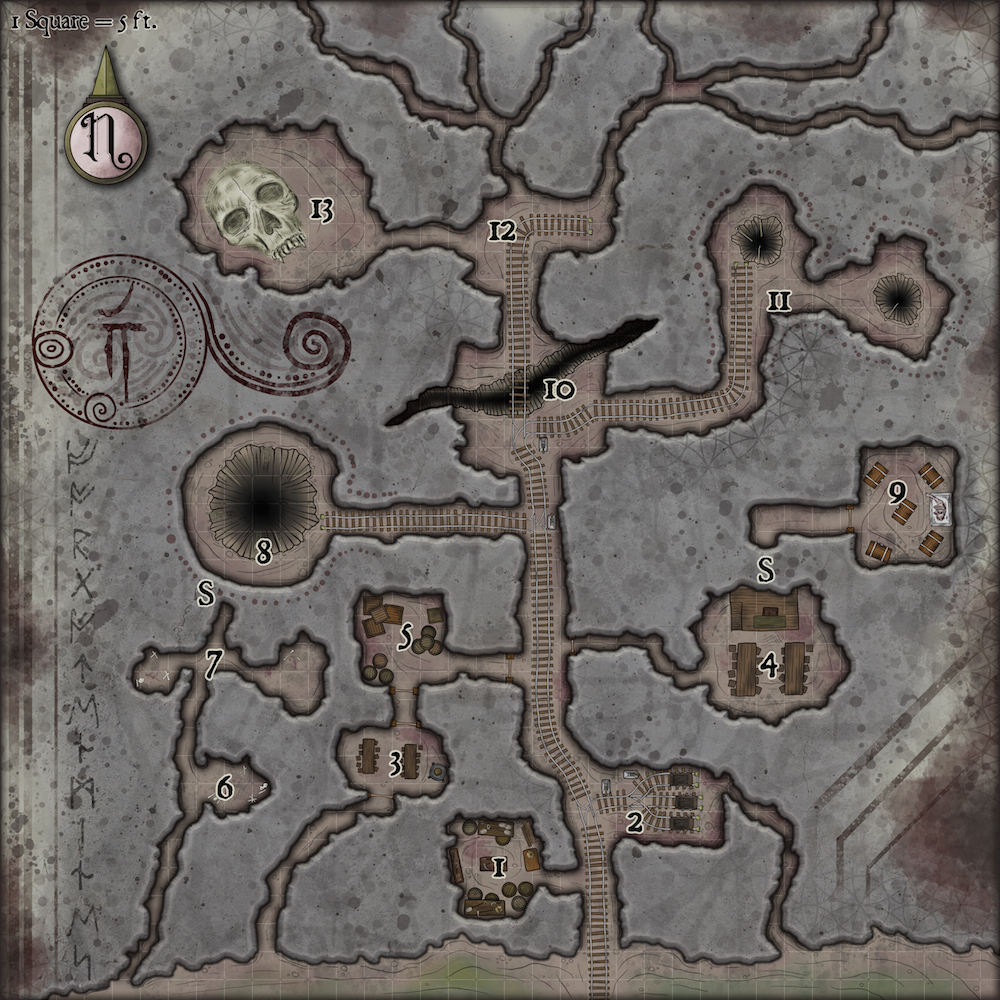 Rolu Dvorak is known in town as the taskmaster of the coal mine. The dwarf overseer is short, stout, and features a long orange beard braided through three black rings. The dwarves working under him respect him and maybe even idolize him. For he is a strong man who takes care of his own and provides a decent way of life for the miners. At least, that is what most people think. Rolu Dvorak has spent the better part of ten years micromanaging his public appearance and the opinion about him to make him look like he is nothing but a mining enthusiast.

There is a hidden truth behind this facade. Rolu Dvorak is the leader of an underground organization. A criminal syndicate dedicated to robbery, pillaging, and trade caravan raids. They do not have a name to call themselves; Rolu has no interests in having a name or reputation attached to it. The city watch and other people involved call them “the syndicate” only. Rolu Dvorak has no interest in harming people but is not afraid to dos so should they attempt to stop his raids. Rolu’s men are well trained in all kinds of criminal skills. These men work on the mine too or at least pose as miners to keep the impression of humble working men.

After stealing goods and valuables, Rolu’s men are in charge of bouncing these goods back to town. They usually spread their sales among different settlements to avoid suspicion. Things became heated two weeks ago when two city watch guards came to investigate the mine after a farmer reported suspicious activities. The miners/gang members led the guards through the alternate entrance and ditched them near the carrion crawler’s lair (Area 7). Both men died and now their bones are part of the cave scenery. Rolu Dvorak now suspects that the city watch will grow even more interested in the mine after the two guards went missing.

This chamber is next to the mine’s main entrance. There are crates, barrels, tables, shelves, and other wooden containers. Most of them contain food products, drinkable water, and other edibles. The room functions like a pantry of sorts.

The only railroad that enters the mine takes a right turn to this checkpoint. Switching mechanisms allow for any of the three mine carts to move farther into the mine or exit it. The carts are large enough for three medium-sized people to ride. Fighting in a cart with two or more people gives disadvantage in all attacks. There is a narrow cave behind the checkpoint that leads back to the outside after a right turn.

Real miners eat in this chamber before returning to their homes and loved ones every evening. There are two tables with benches and a wood stove near the east wall. Accommodations are spartan. The south tunnel leads back out to the outside.

Rolu Dvorak and his lackeys eat here. About twenty people form Rolu’s syndicate. Some of them, the lower ranking ones, also double up as miners and work half shifts. The rest of them are experienced fighters and criminals and do as Rolu says. Rolu sits on a throne-like chair on a dais and shares stories of grandeur to his lackeys while eating.

The north wall features three rotating stones with numbers etched on the sides. Orientating the stones so that the numbers 6 – 8 – 3 face upwards activates a mechanism that slides the wall to the left. This reveals a passage to the secret vault in Area 9. Only Rolu knows this combination.

This room contains crates and barrels. Most of these have explosives, fire retardants, and other mining supplies.

The westernmost cave on the mountain’s face leads to this small cave. The remains of the two guards are here. The carrion crawler ate them but it cannot digest bone or metal. That is all that remains. The metal part of one breastplate still brandishes the city watch sigil.

A carrion crawler calls this place home and attacks any visitor. Even the miners do their best to avoid the creature. The creature lives here because Rolu insists on feeding the worm from time to time. He says it might come useful at a later point. The northern passage features an opening device similar to the one in Area 4. The combination of the rotating stones is 4 – 6 – 6. It is known by all miners and it opens a passage to Area 8.

A large and roughly circular chamber. It features a 20-feet-wide hole on the floor. It is deep enough that the bottom is not visible. Even dropping an object does not return a falling sound. This hole was there when the miners arrived, they suspect that it is an entrance to the Underdark. Despite this, some miners have managed to rappel down up to 100 feet to collect a variety of precious metals and access lower sections of the underground complex.

Rolu Dvorak keeps his personal hoard here. The treasure is varied and includes valuable objects of all kinds and hundreds of coins. The combined value of the hoard is 6340 gold pieces. Most of this is stolen goods. Rolu’s men are convinced that this hoard will fuel their future activities but Rolu is, in fact, more interested in his own benefit than they imagine.

This large chamber features a T-intersection of rails. One of the rails crosses over a large opening on the ground. The rail system appears to be sound and there appear to be no visible signs of wear.

While the rail is structurally sound and a mine cart will have no trouble crossing, a pack of fire beetles made a nest ten feet under the surface a few days ago. The beetles get angry when the ground vibrates from any approaching mine cart and attack. These beetles are only defending their lair and will not pursue anyone farther than the room. The beetles explode upon dying, these explosions may damage the rails and even case a mine cart to fall down. If an adventurer falls down through the crack, they are never heard of again.

This area features two mining shafts. Both shafts are 60-feet-deep. There are ropes and rope ladders tied to the side of the shafts.

The mine proper ends here. There are two narrow tunnels spanning from the northern wall. These tunnels divide further and go on for miles. The dwarves have not yet explored or charted these caves. Whatever is beyond those tunnels is outside of the scope of this resource.

Months ago, Rolu’s miners found a strange rock formation they later identified as a large bone. They kept digging until they unearthed the front side of a humanoid-looking skull. The skull is 18-feet-tall and could only belong to an enormous giant, one larger than the modern world has ever seen. The underside of the skull’s eye area is decorated with old runes with no apparent meaning. It is not clear whether the runes were etched after the creature’s demise or if they are part of its bone structure.

These are the general features of the haunted mine. It is a coal mine which has been working for almost two years. It doubles up as the lair of a syndicate of criminal dwarves. It is located a few miles from a large town.

Terrain. The floor in the mine is packed earth with a few sections of crude stone. Most of it is smooth enough to walk normally. Squares with a piece of furniture or an object which obscures at least 50% of the square are considered difficult terrain for the purposes of tactical movement.

Rails. The dwarves have installed a rail system in the mine to improve the production of coal. There is a small “station” of sorts by the entrance (Area 2), the rails connect the entrance with the main parts of the mine. A railroad leads out south towards the town but it does not reach that far. A mile and a half of rails are still missing to connect it to town.

Light. Occupied rooms and areas of the mine by the railroad features torch sconces on the walls. Inhabited areas are lit most of the time but the mine is pitch dark in most other places, except where there are any miners working. The complex is large enough that it is not practical or possible to keep it all lit at the same time.

Smells and Sounds. The pungent smell of pulverized coal dust is in the air. Breathing this for a period of 4 hours or more causes the person to cough with a particular timbre the locals know as miner’s cough. This condition is prone to ruin any stealth attempts since there is a 50% chance the person will cough when trying to sneak around. This condition is cured automatically after leaving the mind for 1d4+1 days. Over a large period of time (2d6+2 years), this condition worsens and eventually kills the miner from a terrible coughing disease that causes internal bleeding.