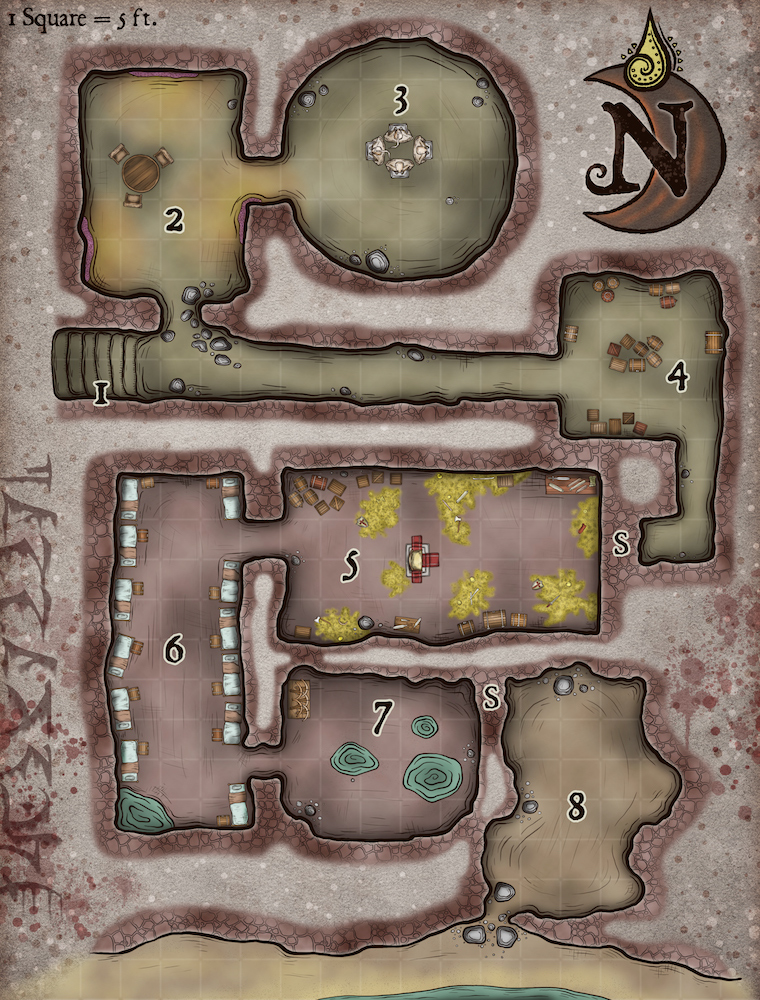 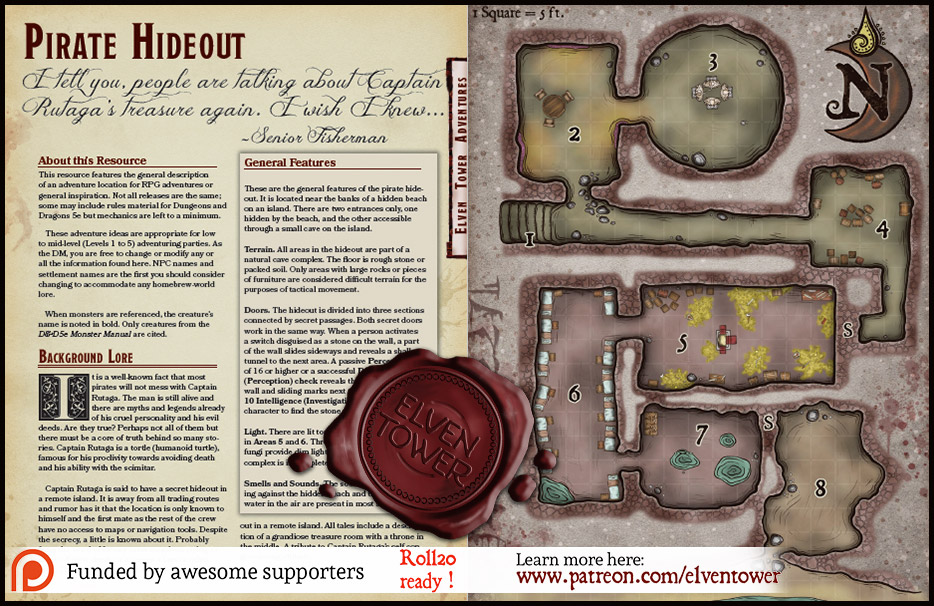 These adventure ideas are appropriate for low to mid-level (Levels 1 to 5) adventur­ing parties. As the DM, you are free to change or modify any or all the information found here. NPC names and settlement names are the first you should consider changing to accommodate any homebrew-world lore.

It is a well-known fact that most pirates will not mess with Captain Rutaga. The man is still alive and there are myths and legends already of his cruel personality and his evil deeds. Are they true? Perhaps not all of them but there must be a core of truth behind so many stories. Captain Rutaga is a tortle (humanoid turtle), famous for his proclivity towards avoiding death and his ability with the scimitar.

Captain Rutaga is said to have a secret hideout in a remote island. It is away from all trading routes and rumor has it that the location is only known to himself and the first mate as the rest of the crew have no access to maps or navigation tools. Despite the secrecy, a little is known about it. Probably from the word of former crew members trying to show off their deeds or impress a lass or other men. The stories talk about an underground hideout in a remote island. All tales include a description of a grandiose treasure room with a throne in the middle. A tribute to Captain Rutaga’s self-congratulating attitude.

The pirates do not use this entrance often, but that does not mean it is not well guarded. The cave entrance is located inside a jungle region on the island. To find it, a character must succeed on a DC 16 Wisdom (Survival) check. Failure by 5 or more means the party is lost inside the jungle for 1d6 hours and is ambushed by 5 bandits.

The natural cave chamber is roughly 20 by 30 feet. A single table with three chairs stands in the middle of the room. Three distracted pirate guards (bandits) spend their leisure time playing a game of dice. From the sound of it, one of them is mad because he lost 5 gold pieces to the other two. He accuses them of cheating with a loaded die.

The room features three patches of luminescent fungi that provide dim light. A DC 14 Wisdom (Nature) check identifies the fungi as a rare component in alchemical concoctions. Repeating the check allows a character to take appropriate samples of it. They can be sold for 30 gp each if they can find the right buyer.

Captain Rutaga brought four monoliths back from an expedition three years ago. The statues have roughly humanoid form but the faces are featureless. They appear to be made from some kind of enameled porcelain. A passive Perception score of 14 or higher reveals the presence of strange runes etched on the porcelain behind the enamel. The runes do not appear to be written in any language known to the characters.

The four statues are magical constructs (gargoyles) under Captain Rutaga’s control. Their only command is to protect the captain and stop any intruders from exploring the complex any further. The captain alone can call on them at any given time telepathically. Under no circumstances do the statues leave the hideout.

This chamber is used to store food, construction, and tool supplies. Nothing in the chamber can properly be called “treasure” but there is no denying that the collective value of the chamber is nothing to ignore. Everything is properly organized in crates, barrels, and chests. Searching the storage room for 1 hour allows the party to find the following: 2 potions of healing, 1 medical kit, 1 longsword, 2 shields, 25 food rations, 2 barrels of wine (25 gp each), a spyglass, and a small box of spices (50 gp).

The large chamber is roughly 40 be 20 feet. A large wooden throne-like chair in the middle of the room dominates the sight. Surrounding the chair and all around the room, especially close to the walls, literal mounds of treasure abound. There are several gold coin piles, objects d’art, golden and silvered utensils, more crates and barrels, and all kinds of treasures.

Captain Rutaga (bandit captain) is in the room, sitting on the central chair. Five pirates (bandits) surround the captain with swords drawn, ready to defend their leader. It is time for the final confrontation. The two pirates from Area 6 join the fight in round two if they are still alive. Despite being a savage combatant, Captain Rutaga does not fight to the death. If things go south for him, he will attempt to flee to Area 8 and hopefully get to his ship.

Under close examination, the treasure is not as impressive as it once seemed. A great deal of the coin piles are nothing but crudely painted forgeries. Holding a coin is enough to notice the ruse. However, there are still plenty of genuine valuables in the room. Collectively, the treasure amounts to 5230 gp.

This large gallery features twelve double bunk beds lining the walls. The arrangements are frugal; some beds lack linens and others are in a very bad state of conservation. There is a small chest next to each bunk. All chests are unlocked but hold no valuables. There are two pirates (bandits) in this room who jump from their beds and attack any unwelcome visitors at once unless they already joined the battle in Area 5.

This natural chamber is almost empty. There are three small water ponds on the floor. It is sea water. The ponds are 20-feet-deep but they have no direct connection to the sea. The water filters through the earth. A mechanical contraption in the northwest corner dominates the room. It is a crossbow trap with five individual crossbows connected to a gear mechanism. It is designed to shoot five bolts at the secret door to Area 8 once the door is opened. Pirates coming from Area 8 shout a secret password to let the people inside know so they turn off the trap. Otherwise, the trap triggers when the secret door opens.

If a character opens the secret door the crossbows shoot. If the character is standing directly in front of the door, he may be hit by one or more bolts. Roll attack for each of the crossbows, each one of them has an attack bonus of +5 and a damage output of 1d8. Be aware that this trap is potentially dangerous for low-level characters, the maximum damage is 21 (5d8) piercing damage.

The secret beach entrance is only accessible if the characters decide to explore the island borders from a ship and circle it looking for it. A character must succeed on a DC 15 Intelligence (Investigation) check to find it. Roll with disadvantage if the character is not proficient with maritime vessels.

There are clear signs of the pirates in this room because of the soft sandy soil. The characters can see footprints and small disposed trinkets around the room but there is no sign of an exit or a passage after this area. A successful DC 12 Wisdom (Survival) check reveals that all footprints converge at a point near the northwest corner of the chamber. Any character can stand in front of the secret entrance and push the stone button to open it once they detect it. (see sidebar on doors). Notice that opening the door in this way triggers the trap in Area 7.

These are the general features of the pirate hideout. It is located near the banks of a hidden beach on an island. There are two entrances only, one hidden by the beach, and the other accessible through a small cave on the island.

Terrain. All areas in the hideout are part of a natural cave complex. The floor is rough stone or packed soil. Only areas with large rocks or pieces of furniture are considered difficult terrain for the purposes of tactical movement.

Doors. The hideout is divided into three sections connected by secret passages. Both secret doors work in the same way. When a person activates a switch disguised as a stone on the wall, a part of the wall slides sideways and reveals a shallow tunnel to the next area. A passive Perception score of 16 or higher or a successful DC 16 Wisdom (Perception) check reveals the presence of a fake wall and sliding marks next to it. A successful DC 10 Intelligence (Investigation) check allows a character to find the stone switch.

Light. There are lit torches in sconces on the walls in Areas 5 and 6. Three patches of luminescent fungi provide dim light in Area 2. The rest of the complex is in complete darkness.

Smells and Sounds. The sound of the waves rolling against the hidden beach and the smell of salt water in the air are present in most areas.