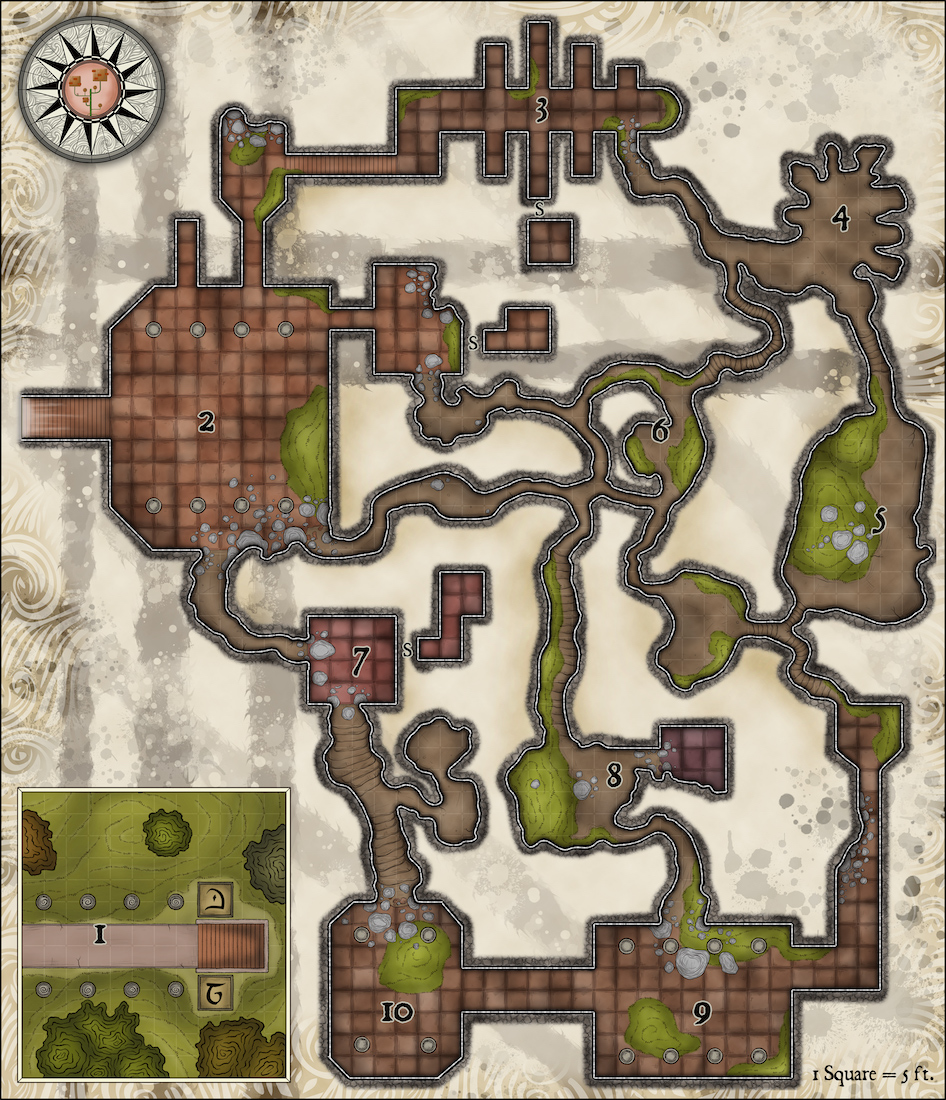 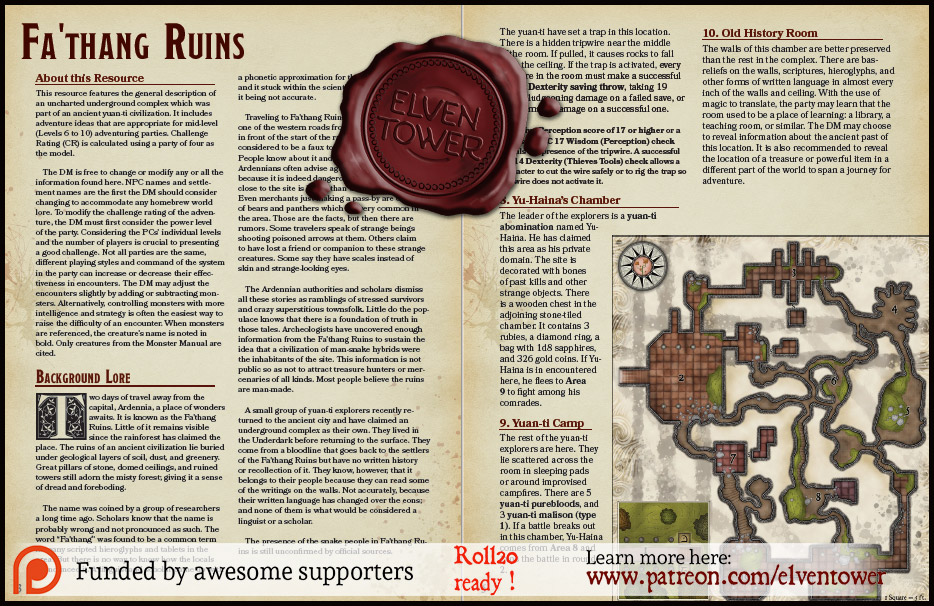 This resource features the general description of an uncharted underground complex which was part of an ancient yuan-ti civilization. It includes adventure ideas that are appropriate for mid-level (Levels 6 to 10) adventur­ing parties. Challenge Rating (CR) is calculated using a party of four as the model.

Two days of travel away from the capital, Ardennia, a place of wonders awaits. It is known as the Fa’thang Ruins. Little of it remains visible since the rainforest has claimed the place. The ruins of an ancient civilization lie buried under geological layers of soil, dust, and greenery. Great pillars of stone, domed ceilings, and ruined towers still adorn the misty forest; giving it a sense of dread and foreboding.

The name was coined by a group of researchers a long time ago. Scholars know that the name is probably wrong and not pronounced as such. The word “Fa’thang” was found to be a common term in many scripted hieroglyphs and tablets in the area. But there is no way to know how the locals pronounced it. A linguist and scholar came up with a phonetic approximation for the written language and it stuck within the scientific community, despite it being not accurate.

Traveling to Fa’thang Ruins is relatively easy as one of the western roads from the capital passes in front of the start of the ruins. Fa’thang Ruins is considered to be a faux touristic place, however. People know about it and want to visit it but the Ardennians often advise against making such a trip because it is indeed dangerous. The local fauna close to the site is larger than usual and ferocious. Even merchants just making a pass-by are cautious of bears and panthers which are very common in the area. Those are the facts, but then there are rumors. Some travelers speak of strange beings shooting poisoned arrows at them. Others claim to have lost a friend or companion to these strange creatures. Some say they have scales instead of skin and strange-looking eyes.

The Ardennian authorities and scholars dismiss all these stories as ramblings of stressed survivors and crazy superstitious townsfolk. Little do the populace knows that there is a foundation of truth in those tales. Archeologists have uncovered enough information from the Fa’thang Ruins to sustain the idea that a civilization of man-snake hybrids were the inhabitants of the site. This information is not public so as not to attract treasure hunters or mercenaries of all kinds. Most people believe the ruins are man-made.

A small group of yuan-ti explorers recently returned to the ancient city and have claimed an underground complex as their own. They lived in the Underdark before returning to the surface. They come from a bloodline that goes back to the settlers of the Fa’thang Ruins but have no written history or recollection of it. They know, however, that it belongs to their people because they can read some of the writings on the walls. Not accurately, because their written language has changed over the eons; and none of them is what would be considered a linguist or a scholar.

The presence of the snake people in Fa’thang Ruins is still unconfirmed by official sources.

The entrance to the new lair of the yuan-ti explorers is near the fallen statue of an old yuan-ti warrior. A short corridor flanked by eight stone pillars marks the spot. A passive Perception score of 15 or higher or a successful DC 15 Wisdom (Perception) check reveals footprints of both humanoids and one set of tracks of a large snake.

This grandiose location has seen better days. It appears it once was a place of worship. Only dust and rocks remain of the altar at the western end of the chamber. Most of it is covered in greenery. There are 3 yuan-ti pureblood in this room sitting in camp. One of them has a horn he will try to blow to alert the rest of the yuan-ti in the complex.

Only dust remains of the eight sarcophagi that should have been in the alcoves. There is nothing of value in the area. A passive Perception score of 18 or higher or a successful DC 18 Wisdom (Perception) check reveals the presence of a fake wall in one of the south alcoves. A switch opens to reveal a secret chamber. There was a chest but only splinters remain. 120 gold coin lie scattered across the floor, they feature a strange sigil of a snake eating itself.

Seven recently dug alcoves on the walls contain 1d8 yuan-ti eggs each. The eggs are supposed to hatch within the fortnight. The eggs are not alone, a yuan-ti malison (type 1) and 2 yuan-ti pureblood will defend the nest with their lives.

The increasing reports of strange scaly people attacking merchants are not unfounded. The yuan-ti have robbed many travelers and merchant caravans from their belongings. All the loot is here, most of it is sellable items and products meant for merchant ventures. A crate of cinnamon is worth 300 gp outside of the kingdom. Another package of Ardennian Silk is worth 800 gp outside of the kingdom. The place is guarded by 2 giant snakes trained to attack any non-yuan-ti.

These narrow passages connect many different areas within the complex but the yuan-ti do not use them. They prefer to move around the area because a dangerous roper lives there. Yu-Haina has tried twice to get rid of it but he has lost 4 yuan-ti already. All of them are avoiding the area for the moment.

The yuan-ti have set a trap in this location. There is a hidden tripwire near the middle of the room. If pulled, it causes rocks to fall from the ceiling. If the trap is activated, every creature in the room must make a successful DC 17 Dexter­ity saving throw, taking 19 (6d6) bludgeoning damage on a failed save, or half as much damage on a successful one.

A passive Perception score of 17 or higher or a successful DC 17 Wisdom (Perception) check reveals the presence of the tripwire. A successful DC 14 Dexterity (Thieves Tools) check allows a character to cut the wire safely or to rig the trap so the wire does not activate it.

The leader of the explorers is a yuan-ti abomination named Yu-Haina. He has claimed this area as his private domain. The site is decorated with bones of past kills and other strange objects. There is a wooden chest in the adjoining stone-tiled chamber. It contains 3 rubies, a diamond ring, a bag with 1d8 sapphires, and 326 gold coins. If Yu-Haina is in encountered here, he flees to Area 9 to fight among his comrades.

The rest of the yuan-ti explorers are here. They lie scattered across the room in sleeping pads or around improvised campfires. There are 5 yuan-ti purebloods, and 3 yuan-ti malison (type 1). If a battle breaks out in this chamber, Yu-Haina comes from Area 8 and joins the battle in round 2.

The walls of this chamber are better preserved than the rest in the complex. There are bas-reliefs on the walls, scriptures, hieroglyphs, and other forms of written language in almost every inch of the walls and ceiling. With the use of magic to translate, the party may learn that the room used to be a place of learning: a library, a teaching room, or similar. The DM may choose to reveal information about the ancient past of this location. It is also recommended to reveal the location of a treasure or powerful item in a different part of the world to span a journey for adventure.

These are the general features of the underground complex found near the center of the Fa’thang Ruins. The complex is located one day of travel away from the capital Ardennia. The entrance is located near the fallen statue of a snake-human hybrid creature.

Terrain. The underground complex is formed of several ancient chambers in bad shape and rough tunnels that connect these locations. The tunnels are not as old as the stone-tiled sections but they are rough and made with crude tools. Areas with debris or rocks and tunnels narrower than 5 ft. are considered difficult terrain for the purposes of tactical combat.

Light. The layer of soil that covers the ancient ruins is soggy and soft due to constant rainfall. This caused the formation of narrow holes on the ground that lead to several areas of the underground complex. All areas with greenery feature these holes in the ceiling; during the day they provide dim-light. Most shafts are not wide enough for a creature to climb up or down.

Smells and Sounds. A smell of wet soil and greenery is prevalent throughout the underground complex. The smell is similar to that found before it rains. The sound of water dripping from above is also common. Water does not stay in the dungeon as it filters further down.