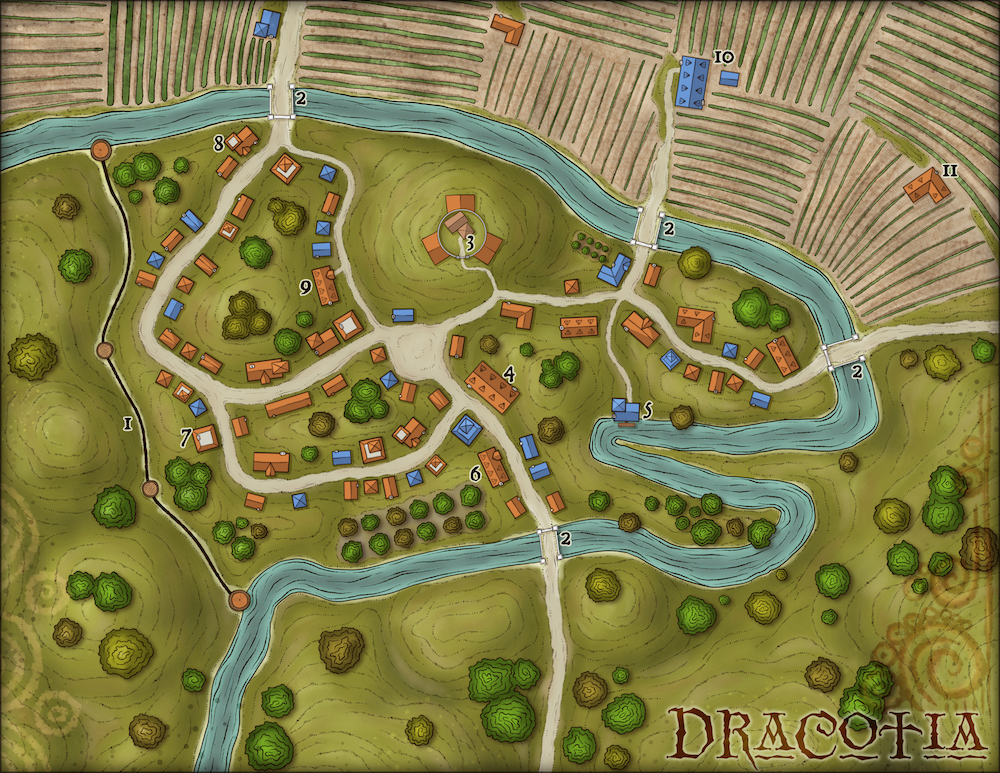 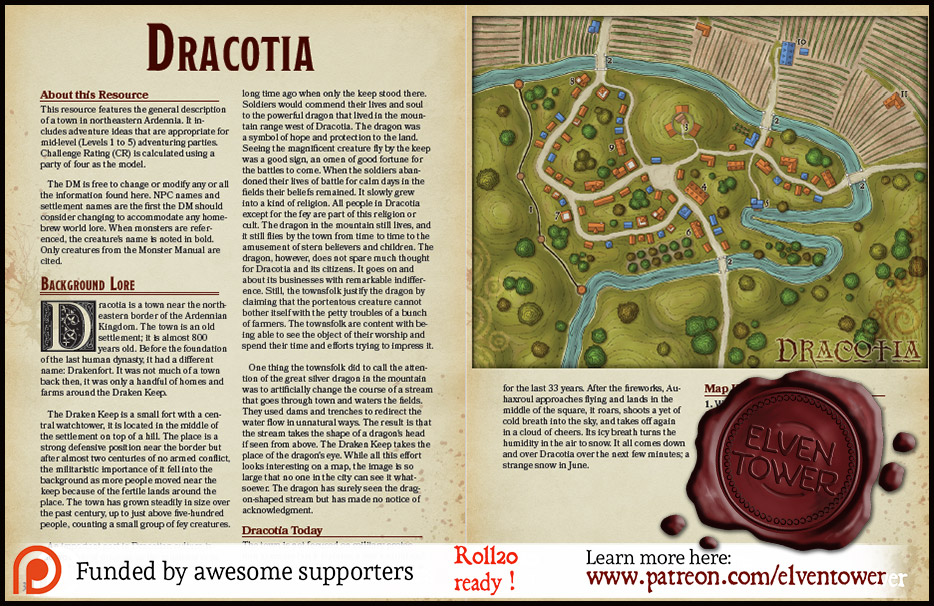 This resource features the general description of a town in northeastern Ardennia. It includes adventure ideas that are appropriate for mid-level (Levels 1 to 5) adventur­ing parties. Challenge Rating (CR) is calculated using a party of four as the model.

Dracotia is a town near the northeastern border of the Ardennian Kingdom. The town is an old settlement; it is almost 800 years old. Before the foundation of the last human dynasty, it had a different name: Drakenfort. It was not much of a town back then, it was only a handful of homes and farms around the Draken Keep.

The Draken Keep is a small fort with a central watchtower, it is located in the middle of the settlement on top of a hill. The place is a strong defensive position near the border but after almost two centuries of no armed conflict, the militaristic importance of it fell into the background as more people moved near the keep because of the fertile lands around the place. The town has grown steadily in size over the past century, up to just above five-hundred people, counting a small group of fey creatures.

An important part in Dracotian culture is the worship of dragons as the mightiest creatures of the world. This religion has its roots a long time ago when only the keep stood there. Soldiers would commend their lives and soul to the powerful dragon that lived in the mountain range west of Dracotia. The dragon was a symbol of hope and protection to the land. Seeing the magnificent creature fly by the keep was a good sign, an omen of good fortune for the battles to come. When the soldiers abandoned their lives of battle for calm days in the fields their beliefs remained. It slowly grew into a kind of religion. All people in Dracotia except for the fey are part of this religion or cult. The dragon in the mountain still lives, and it still flies by the town from time to time to the amusement of stern believers and children. The dragon, however, does not spare much thought for Dracotia and its citizens. It goes on and about its businesses with remarkable indifference. Still, the townsfolk justify the dragon by claiming that the portentous creature cannot bother itself with the petty troubles of a bunch of farmers. The townsfolk are content with being able to see the object of their worship and spend their time and efforts trying to impress it.

One thing the townsfolk did to call the attention of the great silver dragon in the mountain was to artificially change the course of a stream that goes through town and waters the fields. They used dams and trenches to redirect the water flow in unnatural ways. The result is that the stream takes the shape of a dragon’s head if seen from above. The Draken Keep takes the place of the dragon’s eye. While all this effort looks interesting on a map, the image is so large that no one in the city can see it whatsoever. The dragon has surely seen the dragon-shaped stream but has made no notice of acknowledgment.

The town is not focused on military protection anymore but it features a few natural and artificial barriers. The western side of town is covered by a wooden palisade that the stream at both ends. The rest of the town enjoys the natural protection the stream provides. These defensive barriers are not designed to withstand an open confrontation, but they keep brigands and road thieves at bay.

Most buildings are within the palisade and stream, but a few houses are out there by the farms. The Draken Keep is on top of a hill, next to the stream. Since the coronation of Queen Ai’Haranna, the ruler of Dracotia is Lord Ha’Illarin, a pixie noble. Lord Ha’Illarin is a terrible despot and racist against non-fey creatures but he sees the town as a business he is committed to making grow. Under his rule, the town has grown steadily and things appear to follow the same trend even today. The town is also home to about twenty satyrs, they enjoy a privileged position because of their natural fey blood. Along with the lord, the satyrs own most of the land in and around Dracotia. This is because Lord Ha’Illarin has gifted them great plots of lands, some of them previously owned by humans. Most humans work for them in the farms and fields.

On the highest reaches of the mountain range west of Dracotia is the lair of Auhaxroul, an adult silver dragon. Auhaxroul is a creature of mystery in the region. It makes no effort to hide its presence so people in nearby settlements see it fly high in the skies at least twice a month. Auhaxroul is well aware of the recent changes of royalty in the Ardennian Kingdom but has chosen to take no sides and to not interfere with history. Auhaxroul sometimes visits the capital taking the outer image of a noble elf. It enjoys Ardennian cuisine and conversation. These visits happen every month or two.

Auhaxroul is a student of the planes and celestial bodies. It spends one season per year at the Eye of the West researching remote locations for its own works of discovery. A few times a year, Auhaxroul flies east and crosses over the kingdom’s border. It flies east for three days to meet an ancient copper dragon who is willing to part with some secrets now that the end of its life is near.

Auhaxroul is aware of the religious efforts to revere it in the town of Dracotia. Auhaxroul feels pity for them as they spend their time and work worshipping an indifferent, but present, figure. Auhaxroul likes the smaller races but finds it hard to sympathize with them as their lifespans are so short. That is one of the reasons why it insists on not taking any side; it considers all the squabbles of the small races a petty subject of study. The recent influence of Queen Ai’Haranna and the armies from the Feywild is more worrying, however. That is why Auhaxroul looks closely to any developments.

While Auhaxroul dismisses Dracotia most of the time. It decided to please the locals by making an annual appearance during the summer solstice. That day, the town celebrates a great party where people dress up as drakes and dragons. There are theater plays, street performances, a grand farmer’s market, and fireworks. Auhaxroul has made an appearance for the last 33 years. After the fireworks, Auhaxroul approaches flying and lands in the middle of the square, it roars, shoots a yet of cold breath into the sky, and takes off again in a cloud of cheers. Its icy breath turns the humidity in the air to snow. It all comes down and over Dracotia over the next few minutes; a strange snow in June.

These are the general features of Dracotia. It is located near the northeastern corner of the kingdom. It is located almost four days of travel from the capital, Ardennia. It features a man-made stream in the shape of a dragon’s head.

Terrain. The town is surrounded by grassy hills and vibrant vegetation. The town is well connected to other settlements through three well-kept roads. The Dragon Stream that goes through the town had its course changed over time to take the shape of a dragon’s head with its mouth slightly open.