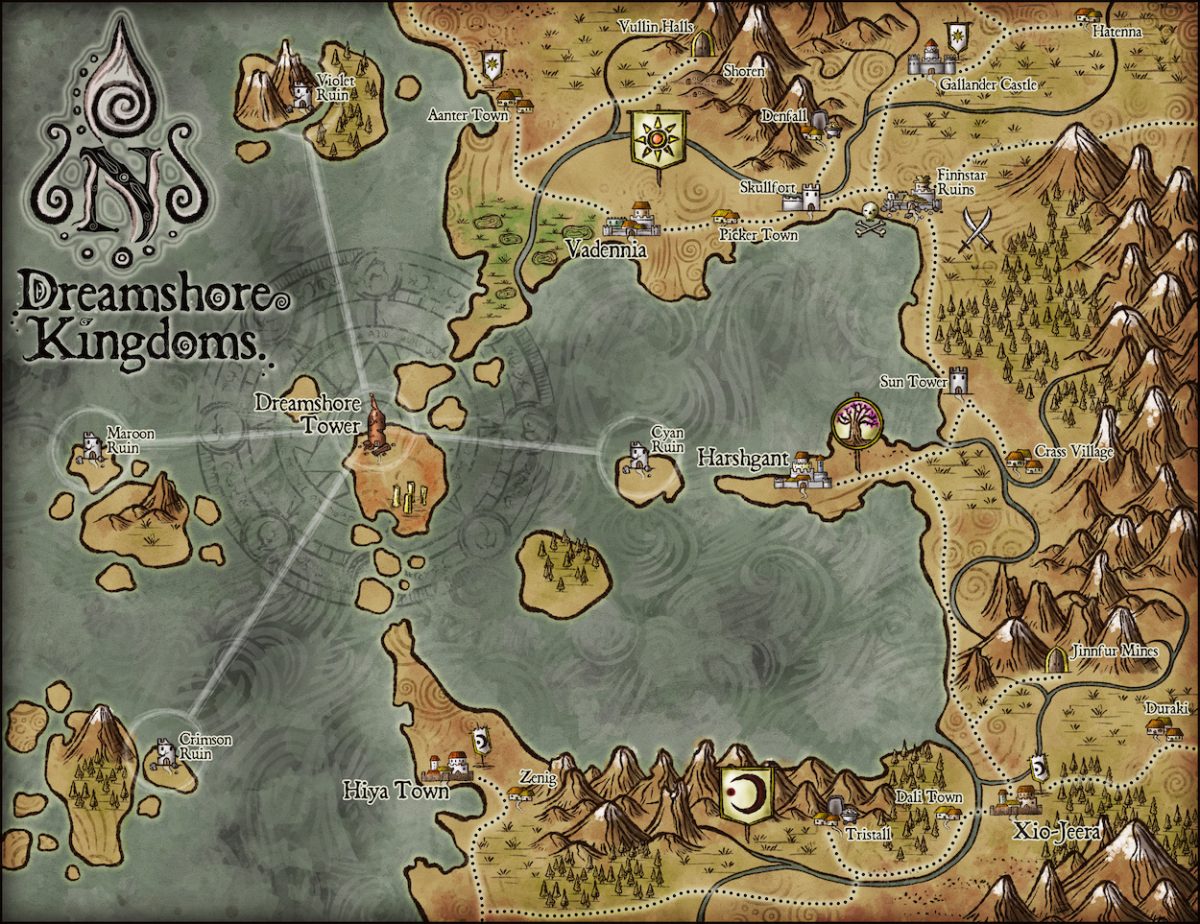 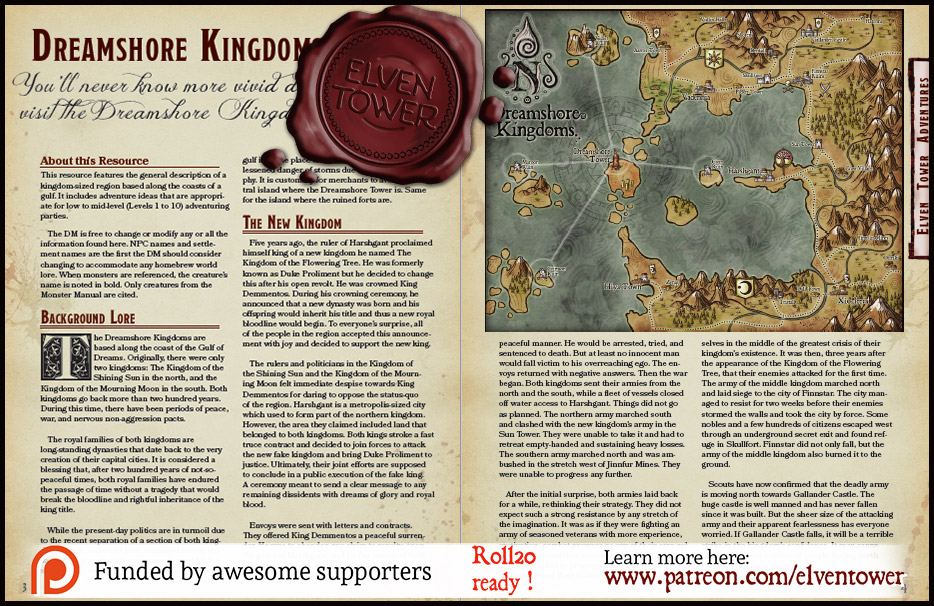 This resource features the general description of a kingdom-sized region based along the coasts of a gulf. It includes adventure ideas that are appropriate for low to mid-level (Levels 1 to 10) adventur­ing parties.

The Dreamshore Kingdoms are based along the coast of the Gulf of Dreams. Originally, there were only two kingdoms: The Kingdom of the Shining Sun in the north, and the Kingdom of the Mourning Moon in the south. Both kingdoms go back more than two hundred years. During this time, there have been periods of peace, war, and nervous non-aggression pacts.

The royal families of both kingdoms are long-standing dynasties that date back to the very creation of their capital cities. It is considered a blessing that, after two hundred years of not-so-peaceful times, both royal families have endured the passage of time without a tragedy that would break the bloodline and rightful inheritance of the king title.

While the present-day politics are in turmoil due to the recent separation of a section of both kingdoms, trade and travel have remained mostly the same. Since most settlements are located by the shore, water trade routes are the most popular. The gulf is a safe place to sail, with calm waters and a lessened danger of storms due to the gulf geography. It is customary for merchants to avoid the central island where the Dreamshore Tower is. Same for the island where the ruined forts are.

Five years ago, the ruler of Harshgant proclaimed himself king of a new kingdom he named The Kingdom of the Flowering Tree. He was formerly known as Duke Proliment but he decided to change this after his open revolt. He was crowned King Demmentos. During his crowning ceremony, he announced that a new dynasty was born and his offspring would inherit his title and thus a new royal bloodline would begin. To everyone’s surprise, all of the people in the region accepted this announcement with joy and decided to support the new king.

The rulers and politicians in the Kingdom of the Shining Sun and the Kingdom of the Mourning Moon felt immediate despise towards King Demmentos for daring to oppose the status-quo of the region. Harshgant is a metropolis-sized city which used to form part of the northern kingdom. However, the area they claimed included land that belonged to both kingdoms. Both kings stroke a fast truce contract and decided to join forces to attack the new fake kingdom and bring Duke Proliment to justice. Ultimately, their joint efforts are supposed to conclude in a public execution of the fake king. A ceremony meant to send a clear message to any remaining dissidents with dreams of glory and royal blood.

Envoys were sent with letters and contracts. They offered King Demmentos a peaceful surrender. He was to abandon any claim to royalty, open the gates of Harshgant, and let the armies of both neighboring kingdoms enter and take the city in a peaceful manner. He would be arrested, tried, and sentenced to death. But at least no innocent man would fall victim to his overreaching ego. The envoys returned with negative answers. Then the war began. Both kingdoms sent their armies from the north and the south, while a fleet of vessels closed off water access to Harshgant. Things did not go as planned. The northern army marched south and clashed with the new kingdom’s army in the Sun Tower. They were unable to take it and had to retreat empty-handed and sustaining heavy losses. The southern army marched north and was ambushed in the stretch west of Jinnfur Mines. They were unable to progress any further.

After the initial surprise, both armies laid back for a while, rethinking their strategy. They did not expect such a strong resistance by any stretch of the imagination. It was as if they were fighting an army of seasoned veterans with more experience, motivation, combat prowess as any of their own soldiers. The skirmishes continued for months as both kingdoms failed to progress into enemy territory. Both kings and their military advisors found themselves in the middle of the greatest crisis of their kingdom’s existence. It was then, three years after the appearance of the Kingdom of the Flowering Tree, that their enemies attacked for the first time. The army of the middle kingdom marched north and laid siege to the city of Finnstar. The city managed to resist for two weeks before their enemies stormed the walls and took the city by force. Some nobles and a few hundreds of citizens escaped west through an underground secret exit and found refuge in Skullfort. Finnstar did not only fall, but the army of the middle kingdom also burned it to the ground.

Scouts have now confirmed that the deadly army is moving north towards Gallander Castle. The huge castle is well manned and has never fallen since it was built. But the sheer size of the attacking army and their apparent fearlessness has everyone worried. If Gallander Castle falls, it will be a terrible strike in the kingdom’s confidence. It may cause riots and a great number of people fleeing north looking for a safer haven.

There is an island in the middle of both gulf peninsulas where a great ruined tower is. It is known as Dreamshore Tower. No one gave it that name, the name comes to everyone in dreams. It is the same with the four ruined forts in small islands. The forts are named after different colors: violet, cyan, maroon, and crimson are the colors represented in each of them. Originally, the tower and the forts were part of an arcane engine that could sustain an open gate between the material plane and the Realm of Dreams. There was a magical orb made of alien metals and imbued with ineffable elemental energies in each of the forts. The produces a special type of arcane magic in a beam of energy. Each of the forts was supposed to work like a magnifying lens, focusing the energy on the central tower where an eldritch device opened the gate to the dream world.

This elaborate device does not work anymore. It was destroyed by giants in the early times after a long war. The giants destroyed the four forts and brought down most of the tower. The four elemental orbs were destroyed in the process but a piece of one of them survived. This small piece of the original orb regenerated part of its mass but it remains useless for its original purpose. The broken orb is in the Maroon Ruin. While it cannot generate enough energy for its intended purpose, it still beams whatever energy it has to the broken tower. It has done this for millennia.

The eldritch apparatus in the broken tower was destroyed completely. Not a single piece of it survived the giant attack or the passage of time. The invisible low-energy beam from the Maroon Ruin has nowhere to go so it defuses against the broken stones of the tower. Its energy radiates in every direction with no purpose. This is the cause of the vivid dreams and increased oneiric experiences in the area. The leftover arcane energy from the broken orb disperses in the form of an aura. Its original purpose of the four orbs and the eldritch device was to open a physical portal to the dream world; now a single broken orb is only strong enough to slightly increase the dreams in the local population.

The gate device is broken. But even after all this time, the horrible abominations from the Dreamscape try to find ways of influencing the area around their broken artifact. They found a way a century ago. They found out that a physical portal was no longer possible but they could infiltrate and influence people through their dreams with the help of the broken orb. So long as a person remained in the area, and given enough time, the dream creatures could manipulate their dreams to create motivations, implant ideas, or change their behavior towards other people or concepts. This was a slow process. An idea or concept could take a year or even decades to be implanted successfully.

The dream creatures decided to destabilize the area by creating a new kingdom in the middle of the two. A person was chosen to be proclaimed as king. This person was special because a dream creature could inhabit the person’s brain and control him directly. Duke Proliment was the chosen one, but his preparation started decades before he was born. The dream creatures influenced his bloodline for the past six generations with dreams and subtle manipulations of people’s interests and sexual choices, choosing people who were susceptible to mind control, weak minds. After six generations of selective breeding of weak-minded individuals, Proliment was born.

But he was not the only one. The whole population of the chosen area was prepared for a political change. When the new king appeared, everyone had been manipulated to believe in him as his or her new rightful king. In addition, the population of the new kingdom was imbued with an extreme sense of duty and fearlessness through their dreams. It is because of this meddling that the Kingdom of the Flowering Tree was born and is so difficult to destroy. Their citizens have no fear to defend their new kingdom and the king has unanimous approval.

Given enough time, the Kingdom of the Flowering Tree will take over the whole area. Destroying both northern and southern kingdoms and assimilating their citizens into them. The only feasible way to stop them is to discover the source of the dreams, traveling to the ruined forts and finding out which one of them still has a working orb. The destruction of the broken arcane orb is the only way to stop the influence of the dream creatures on the region. It remains unknown if the destruction of the orb will return people to their normal state of mind or if the implanted ideas are now a part of their psyche.

These are the general features of an area commonly known as the Dreamshore Kingdoms. It is widely known that people who live in this area have life-like dreams often and sometimes visions of the past or the future. The reason for this amplification of oneiric experiences is not understood but many rumors point to the island ruins and the Dreamshore Tower.

Terrain. The region is big enough that many types of terrain are represented. The area somewhat north of the equator. It is usually warm throughout the year but winters see the temperature drop enough to be dangerous for unprotected folks. The peaks of the highest mountains are usually frozen all year round.

Kingdoms. There used to be only two kingdoms five years ago, but a third kingdom spawned in the middle of the two after a quick but blood-tainted revolution. Now a new faction grows steadily as the shadow of an approaching war looms closer.

Dreams. The Dreamshore Tower is a broken portal to the Dreamscape, the Realm of Dreams. It was destroyed eons ago in a planar war, before any human-settled the area. The lingering magical auras in the tower produce an increased sensation of dreams in the humanoids in the area. They remember dreams more often and can also be aware that they dream while it happens. 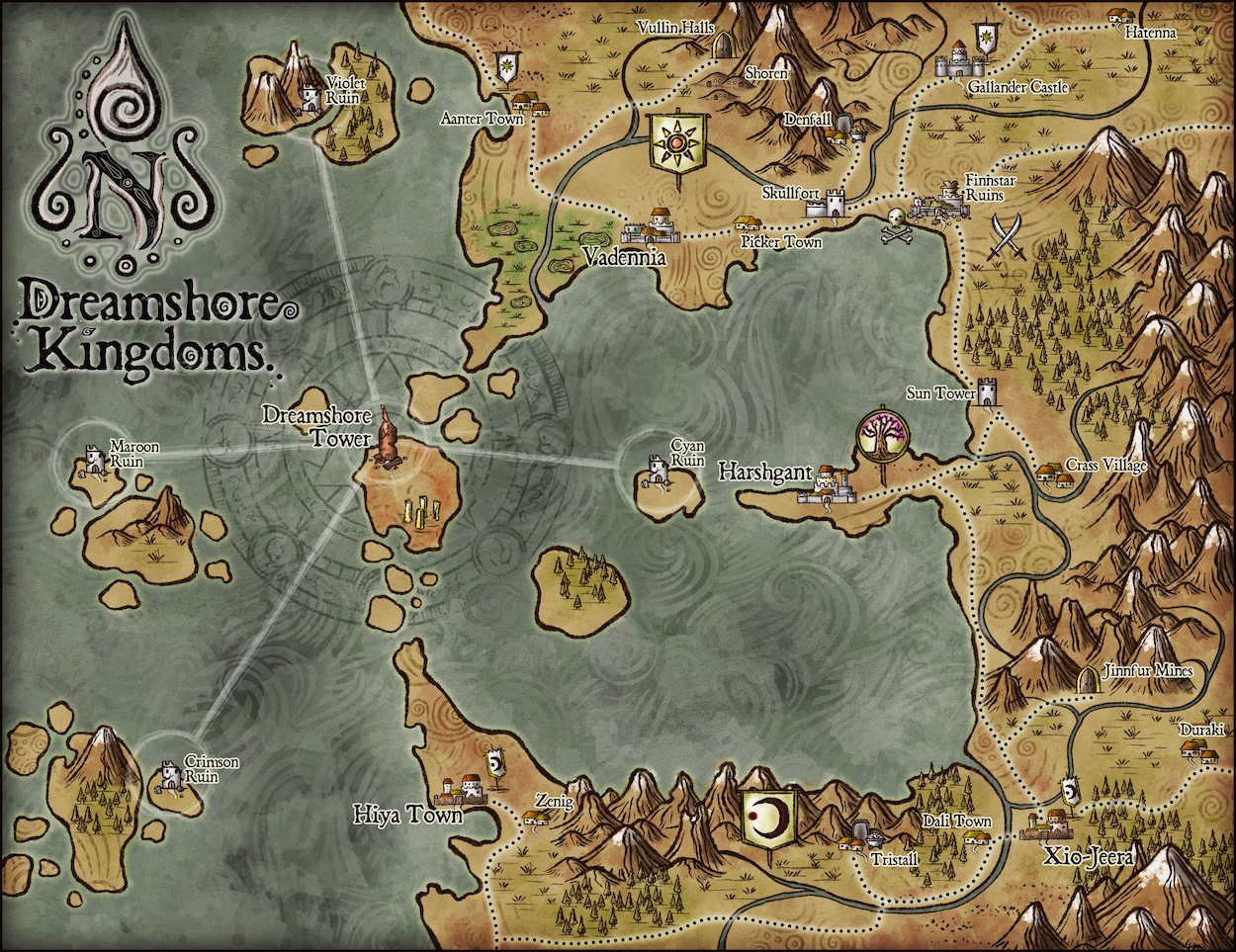