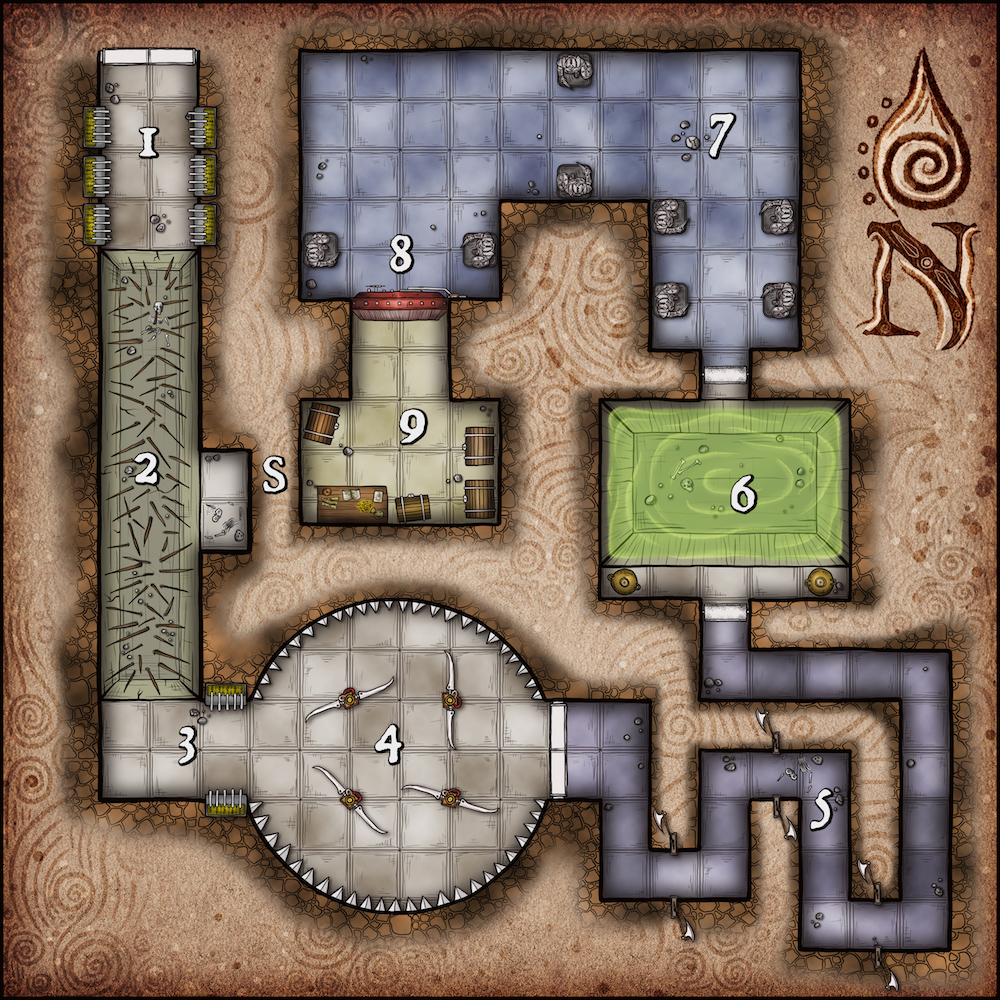 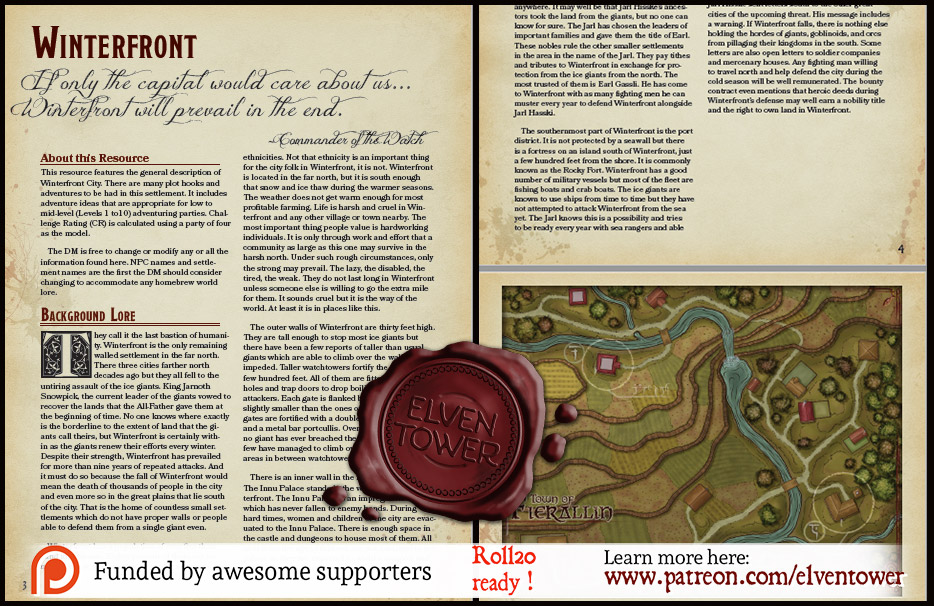 This resource features the in-depth description of an underground vault with many traps. It includes adventure ideas that are appropriate for mid-level (Levels 6 to10) adventur­ing parties. Challenge Rating (CR) is calculated using a party of four as the model.

The underground vault depicted in this resource does not include a detailed background story, nor does it specify the owner, creator of the vault, or the valuable contents in Area 9. These bits of information have been left vague on purpose. As the DM, feel free to lift this dungeon and any ideas herein and use them in your own game at home. Feel free to fill in the details that are missing in this document.

Perhaps the vault’s owner is a criminal faction in a great city; the contents of the vault being gold and jewels. Or it could be a long-forgotten vault that belonged to an ancient wizard or lich. What marvelous magic items await in the center of the vault?

The iron double doors are locked. A detect magic spell reveals an aura of abjuration magic. The doors normally only open if a person says the command word “Aradenk”. If the PCs have no access to this information, they will have to use other means to enter. A passive Perception score of 16 or higher or a successful DC 16 Wisdom (Perception) check reveals a loose brick next to the door. A section of the door’s mechanism hides behind the brick. A successful DC 18 Dexterity (Thieves Tools) check allows a character to open the doors. Alternatively, A successful DC 22 Strength (Athletics) check allows a character to force open the doors.

When the door opens, read the following:

A 10-foot-wide hallway stands before you. –strange writings and bas-reliefs adorn the walls. The hallway is large, but it only goes on 20 ft. before the floor drops to a pit. Most of the hallway is a pit. In the distance, you can see iron spikes protruding from the bottom of the pit.

A passive Perception score of 15 or higher reveals several sets of holes along the walls. There are three sets of four holes on each side of the hallway. A successful DC 15 Intelligence (Investigation) check reveals that the holes are part of a trap that shoots volleys of poisonous darts. The trigger is a loose section of a floor tile in the middle of the hallway. If a character fails to notice the trap and enters the area surrounded by the trap, the trap activates. Any creature in front of any of the trap’s mechanisms must make a suc­cessful DC 14 Dexterity saving throw to avoid being hit by a poisonous dart, taking 12 (4d6) poison damage on a failed save. After each of the six trap shooters has fired once, the trap becomes dormant for an hour. It becomes deadly again then.

The long spiked-pit before you is 30 ft. deep. The iron spikes by the bottom are sharp and rusty. The sorry skeleton of a human lies about 10 ft. away from you at the bottom of the pit. Its position suggests that an iron-spiked pierced his thorax and caused it to die down there. There appears to be an elevated section 20 ft. down the hallway. You can see another skeleton in the elevated section.

Any creature that falls or jumps into the pit must make a suc­cessful DC 16 Dexterity saving throw to avoid being hit by an iron spike, taking 9 (3d6) piercing damage on a failed save. An adventurer may choose to climb down slowly with the aid of a climbing kit. A successful DC 13 Strength (Athletics) check allows a character to descend or climb out safely. Failure by 5 or more means the climbing kit malfunctions and causes the adventurer to fall to the pit.

The elevated section in the middle is a shortcut to the vault. A passive Perception score of 18 or higher reveals a small hole in the wall big enough for a key. The key opens a secret passage to Area 9. A successful DC 25 Dexterity (Thieves Tools) check allows a character to open the secret door. Failure by 5 or more means the pick breaks.

This section of the hallway features two sets of four holes on each side of the wall. These are poison dart traps that function in the same way as the ones in Area 1.

When the adventurers reach this area, read the following:

A circular chamber stands before you. It is 30 ft. in diameter. There is a set of iron double doors opposite to you. The circular walls are lined with blade-like indentations that appear to be sharp. The look like steel teeth. The source of the circling sound in this part of the dungeon comes from here. Four mechanical devices rotate with great speed in the middle of the room. The clockwork machinery gives out the sound of pieces of metal clashing constantly against each other. Each one of those devices is like a fan formed of two thin blades that rotate with furious speed. There appear to be shallow rails under the blade traps where they can move around.

The long shifting hallway in Area 5 is under a permanent darkness spell. A dispel magic spell cast with a level 5 spell slot disables the magical darkness for an hour. Regular darkness remains. Three spots in the hallway feature falling ax traps. Stepping in between the axes triggers the trap. Any creature that activates the trap must make a suc­cessful DC 16 Dexterity saving throw to avoid being hit by the falling axes, taking 12 (4d6) slashing damage on a failed save, or half as much damage on a successful one. The creature rolls with disadvantage if the magical darkness is still active. If the adventurers can see, a character may attempt to disarm each trap with a DC 14 Dexterity (Thieves Tools) check. Failure by 5 or more activates the trap.

This room features a 20 by 15 ft. acid pool. The pungent smell from the potent acid attacks your nostrils. The acid appears to be hot and there is a current moving it around the pond. The half dissolved skeleton of a person looks at you from the bottom of the pond.

Six intricate sculptures watch this winding hallway as it leads to the great vault door. The statues appear to be those of heroes of old. All of them brandish stone weapons and different sets of armor. The walls are decorated with pendants and bas-reliefs that depict great mass battles and the effigies of unknown leaders and kings.

The six statues are immortal guardians (gargoyles). They remain motionless even if perturbed or attack. When a character reaches the middle of the top section of the hallway, the six of them come to life and attack the adventurers.

The vault door is an enormous metallic slate that covers the round tunnel to the vault. It is made of a metallic metal of unknown origin. The front side of the door features a rotating great mechanism and a set of buttons and levers that should open the door if they are set in the right combination. It is beyond the scope of this document to include an elaborate riddle to open the door. DMs are encouraged to come up with their own ideas for the combination or exact method to open the door properly. A passive Perception score of 18 or higher or a successful DC 16 Wisdom (Perception) check reveals a floor tile is slightly clearer in color besides the door, it suggests it was replaced recently. A section of the door’s mechanism hides under the tile. A successful DC 20 Dexterity (Thieves Tools) check allows a character to open the doors, failure by 5 or more means the pick breaks. Alternatively, A successful DC 26 Strength (Athletics) check allows a character to force open the doors.

After a short round tunnel, the adventurers reach their objective. There is a wooden table with valuable objects and/or documents on it. There are four wooden chests which should contain whatever wonders the adventurers were looking for.

These are the general features of the underground trapped vault. Its location is left vague for DMs to fill in the blanks.

Terrain. Most areas within the vault feature floor stone tiles. The floor is not considered difficult terrain in tactical combat unless stated in the area description. Area 2 features a great number of iron spikes that protrude from the floor. Area 6 is flooded with acid.

Doors. The underground vault features two sets of double doors, two regular sized doors, and the vault’s door. All doors are made of iron and other metallic components. Each door and the way to circumvent it are included in the location’s description.

Light. All areas except Area 5 are brightly lit by a neutral hue light with no apparent source. A dispel magic spell or similar disables the light in a room for an hour. Area 5 is under the effects of a permanent darkness spell.

Smells and Sounds. There is no particular smell to be detected in most areas. Area 6 features the pungent smell of the acid vapors in the room. The blade traps in Area 4 can be heard as far as Area 1.