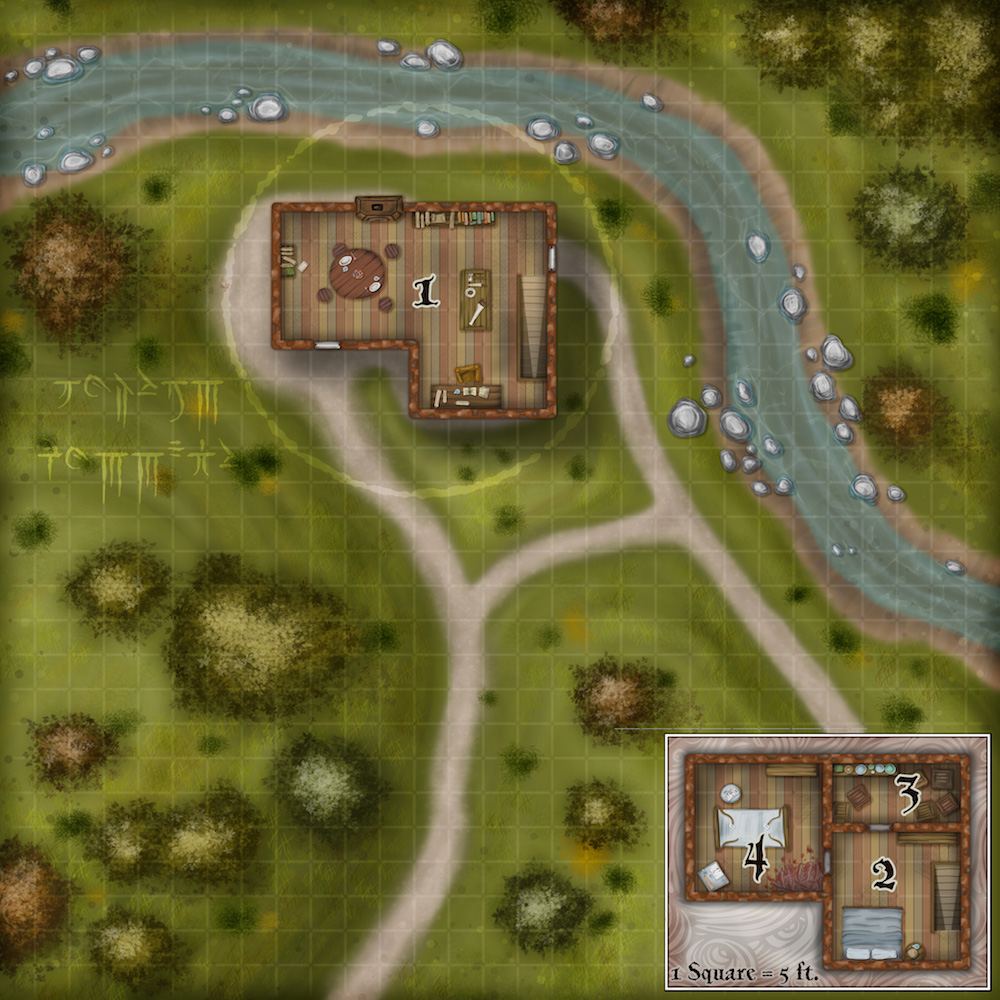 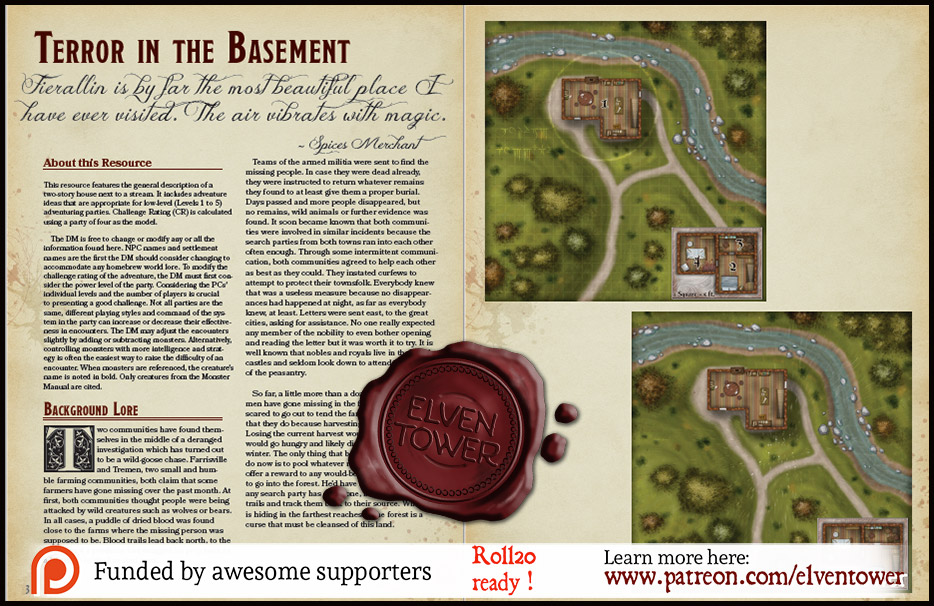 This resource features the general description of a two-story house next to a stream. It includes adventure ideas that are appropriate for low-level (Levels 1 to 5) adventur­ing parties. Challenge Rating (CR) is calculated using a party of four as the model.

Two communities have found themselves in the middle of a deranged investigation which has turned out to be a wild-goose chase. Farrisville and Tremen, two small and humble farming communities, both claim that some farmers have gone missing over the past month. At first, both communities thought people were being attacked by wild creatures such as wolves or bears. In all cases, a puddle of dried blood was found close to the farms where the missing person was supposed to be. Blood trails lead back north, to the forest, as if a predator had dragged its prey back to a lair deep in the forested area.

Teams of the armed militia were sent to find the missing people. In case they were dead already, they were instructed to return whatever remains they found to at least give them a proper burial. Days passed and more people disappeared, but no remains, wild animals or further evidence was found. It soon became known that both communities were involved in similar incidents because the search parties from both towns ran into each other often enough. Through some intermittent communication, both communities agreed to help each other as best as they could. They instated curfews to attempt to protect their townsfolk. Everybody knew that was a useless measure because no disappearances had happened at night, as far as everybody knew, at least. Letters were sent east, to the great cities, asking for assistance. No one really expected any member of the nobility to even bother opening and reading the letter but it was worth it to try. It is well known that nobles and royals live in their high castles and seldom look down to attend the needs of the peasantry.

So far, a little more than a dozen hardworking men have gone missing in the fields. People are scared to go out to tend the farms. But it is crucial that they do because harvesting season is close. Losing the current harvest would mean people would go hungry and likely die during the coming winter. The only thing that both communities can do now is to pool whatever resources they have and offer a reward to any would-be valiant hero willing to go into the forest. He’d have to go deeper than any search party has ever gone, find the lost blood trails and track them back to their source. Whatever is hiding in the farthest reaches of the forest is a curse that must be cleansed of this land.

The entity responsible for the disappearance of multiple farmers and livestock is a former scientist and arcanist named Farollio Gren (Mage). Farollio Gren currently lives in a wooden chalet in a section of the forest which is not as dense as the rest. It is a three days walk from Farrisville. The chalet is actually not very far but the forest is dense enough to impede regular-pace movement. Though there are paths through the forest, a horse is unlikely to get as far as Farollio Gren’s home. Farollio Gren started living in this house a few months ago. The chalet belonged to an aunt who died and inherited it to Farollio.

Being a researcher of the occult and the dark arts, Farollio Gren saw the secluded chalet as an interesting opportunity to explore spells and the manipulation of the Weave with no intervention from outside forces. Farollio Gren’s most valued possession is a brown leather-bound book titled “On the Nature of Unnamed Entities and How to Contact Them”. Farollio stole the book from the tower of his late mentor almost a decade ago. For the past few years, Farollio Gren has attempted to replicate the arcane effects described in the book. He has not had enormous success. He is not as good as his mentor and only an average mage himself. The book describes magical formulae unlike any he had ever stumbled upon before. Two months ago, Farollio finally deciphered the last part of an arcane formula which he judged would let him contact an entity from the Abyss. The formula in the book included the necessary measures to control and bind said being to his will. Farollio Gren knew well that he was meddling with forbidden magic. He rehearsed the spell for weeks before he attempted to cast it for real. He contacted a demonic creature and brought it forth as a physical manifestation in the material plane. However, as it was bound to happen, the last part of the spell failed and the demon would not obey Farollio’s commands. Even worse, the demon took over Farollio’s body and possessed him. With Farollio’s knowledge of magic and the arcane tome, the demon has summoned more of its kind and a few living death to protect the immediate area outside the chalet. The demon does not understand the material world well. Thus, it instructed the lesser manes and dretch demons to go south and west to the nearest populated settlements to bring him prisoners for it to experiment on. Some of those captives ended up becoming zombies and ghouls which now patrol outside the chalet.

The demon repurposed a room in the second story of the chalet as a laboratory/torture room of sorts. The smaller demons seldom bring a live subject but when they do, the demon takes great care to inflict death as painful and as slow as it can. Otherwise, he dissects the corpses and learns how humans (or other humanoid races) work. Farollio Gren is not gone. He is trapped inside his own body, seeing everything that the demon does as if he were in the passenger’s seat. The depravities and deranged experiments of the demon have rendered Farollio insane with dread. Even if the demon is cast away from this world and Farollio’s body preserved, there is no warranty that Farollio will recover from the mental trauma.

These are the general features of the two-story chalet by the forest. It is next to a stream and three days away from the closest settlement.

Terrain. The grasslands outside of the chalet are fertile but undeveloped. Plenty of trees and bushes provide cover and shade during the day. The wooden floor inside the chalet shows signs of constant use but it is in good shape. Squares with any piece of furniture are considered difficult terrain for the purposes of tactical movement.

Doors. All doors are wooden and feature average quality locks. A successful DC 13 Dexterity (Thieves Tools) check allows a character to bypass any of the locks. The front door is reinforced with a wooden drawbar from the inside; picking the lock is not enough to bypass this door. A successful DC 19 Strength (Athletics) check allows a character to force the door open with sheer strength.

Light. Light conditions outside of the chalet are dependent on the weather and the time of day. Area 1 is brightly illuminated by the burning fireplace. Area 2 and Area 3 are in complete darkness. Area 4 is brightly lit by magical lights.

Smells and Sounds. The smell of greenery and mountain dew is prevalent outside. The only sounds are those of wild birds and the rushing stream. Inside the house, there is a lingering smell of burning wood. A successful DC 17 Wisdom (Perception) check reveals the smell of burnt skin in the first story of the chalet. The character rolls with advantage if he is in the second story. The smell comes from Area 4.