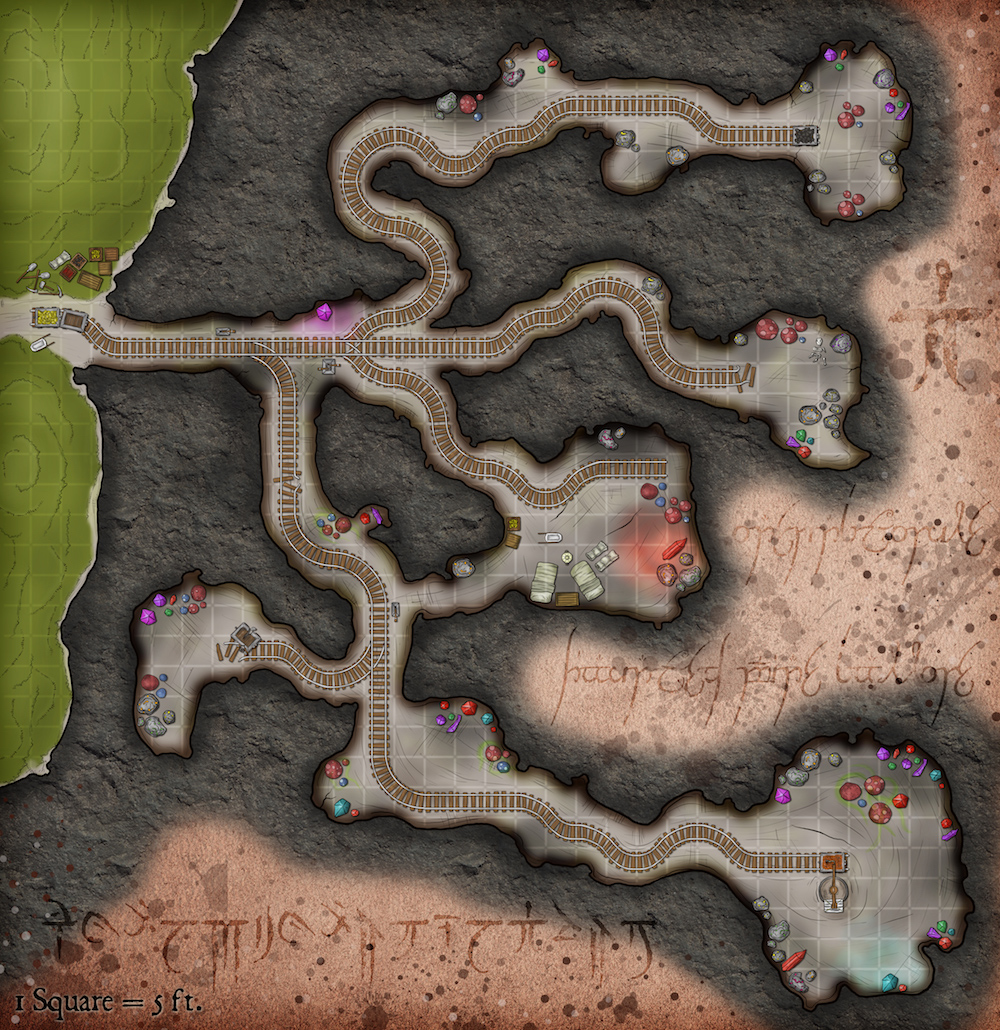 This resource features the general description of a local mine which is rich with many valuable metal veins and precious stones. It includes adventure ideas that are appropriate for mid-level (Levels 1 to 5) adventur­ing parties. Challenge Rating (CR) is calculated using a party of four as the model.

Hanna Silvertooth has always had a knack for good business. She is a 230 years old dwarf who has done it all to earn gold. She grew up in the great halls of the dwarven city beneath the mountains. Life there was slow, comfortable, and full of opportunities. Only not the ones she wanted. Down there she could have done many things to earn her living but all of them entailed staying underground. While that is the desire of most of her kind, it was not in her blood to be contained beneath soil and rocks. Hanna Silvertooth wanted to be outside and breath the fresh air of the world above, so she became a merchant of sorts. She saved some gold and bought some things in the dwarven capital and went outside to sell them in the surface settlements. And it worked out for a while, it did. Over the years, Hanna bought and sold all kinds of things. She started with dwarven wares but soon turned to everything she could find that was worth something to other people. And she soon discovered that you could pretty much sell anything for a great price, as long as you were willing to travel far enough to sell it or hold on to it until a desperate buyer appeared out of the blue.

Hanna Silvertooth became somewhat wealthy over time. One day, a person offered to sell a mine to her. The man argued that he bought it on impulse but later realized that he lacked the knowledge to make some profit off of it. He figured that a dwarf would be best suited for that. Hanna Silvertooth thought that made sense and bought the mine for a very high price. Hanna’s buyers’ remorse was a real thing then. Especially because she first had to procure mining equipment and a team of surveyors and miners. Gathering the necessary materials and people took her almost a month before she was able to actually visit the man personally.

The mine was already fitted with a rail track and was supposed to include five carts. Hanna Silvertooth soon discovered that parts of the track were damaged and that a cart was in shambles. She expected that and did not resent the seller for it. But she also noticed something odd. The main track lines were not made of steel, they were made of steel. They appeared to be made of a non-ferrous alloy of aluminum and copper. That was a terrible choice for rail tracks and explained the overall bad condition of the tracks in comparison with how long the mine had been in operation. Hanna Silvertooth figured that with time, she could replace all tracks with proper iron tracks and sell all the aluminum and copper at their weight value. It could almost pay for itself if she found a good buyer.

It was not long before Hanna and her team of surveyors and miners discovered the reason for the aluminum-copper tracks. The underground area was home to a rather big pack of rust monsters which entered the mine tunnels from cracks on the ground or straight out dug their way into it. The past owner used the non-ferrous tracks because those creatures ignored them. In exchange, the tracks did not work properly and were not durable. The problems started when Hanna’s workers brought in iron tools and other implements necessary for mining. It was a mess! They could not mine properly and lost some of their tools in the process. The rust monsters turned out to be particularly territorial and a battle for the different areas within the mine ensued. Perversely, this was one of the richest mines Hanna ever saw. Overtly visible veins, ore rocks laying about on the floor, and crystals of different value and qualities strewn about the place. It was literally a gold mine, but not just for gold.

There is so much potential profit in it but, so far, Hanna Silvertooth has not been able to clear the area. She and some hired muscle have gone in a few times with crude wooden weapons to try to defeat the monsters but they just keep coming in packs. There are so many of them that after the last clash of dwarves and rust monsters, Hanna ordered all her people to exit the mine and wait outside until she brings reinforcements.

Now Hanna Silvertooth is back in town looking for abled fighters and renowned mercenaries to help her get rid of the blasted creatures that invaded her mine. Hanna Silvertooth understands that the task is dangerous and that the potential profit for her is sizable. Because of this, she is willing to offer a hefty sum of gold to whoever solves her problem. She intends to offer 100 gold pieces to any person that goes in and solves the situation. Additionally, after the problem is solved, Hanna will pay a further 200 gold pieces to any mercenary one month after the mine is cleared and it starts producing some profit. Hopefully, these conditions are juicy enough to attract the presence of strong enough adventurers.

These are the general features of the mine. It is located 10 miles away from the nearest settlement. The road there is cleared well. Traveling there takes about 6 hours at a normal pace.

Terrain. The floor inside the mine is rough rock and unworked soil. Most of the tunnels have been cleared out of any debris or rubble. Any square which contains a crystal, fungi, or ores are considered to be difficult terrain for the purposes of tactical movement.

Rails. All main chambers in the mine are connected by a network of rails. Not all of them are in perfect shape due to the infestation in the mine. The worst part is a rail section south of Area 2 where the rail is damaged and a cart will not go through. A character with blacksmith tools can temporarily fix the rail with a successful DC 14 Intelligence check. A permanent fix would entail removing and fixing a section of the tracks at a smith shop or replacing a section with new tracks.

Light. Area 2 is considered to be dimly lit during the day from the light that enters from the mine’s entrance. Other areas of the mine where some crystals radiate a natural glow are considered dimly lit. The rest of the areas within the mine are in complete darkness.

Smells and Sounds. The clicking sounds of the rust monsters within the mine are often heard in the distance. The smell of raw coal and loose soil is ever-present within the mine. Some fungi patches produce clouds of poisonous spores. If a character approaches within 5 ft. of those fungi, he must make a suc­cessful DC 14 Constitution saving throw to avoid becoming poisoned.