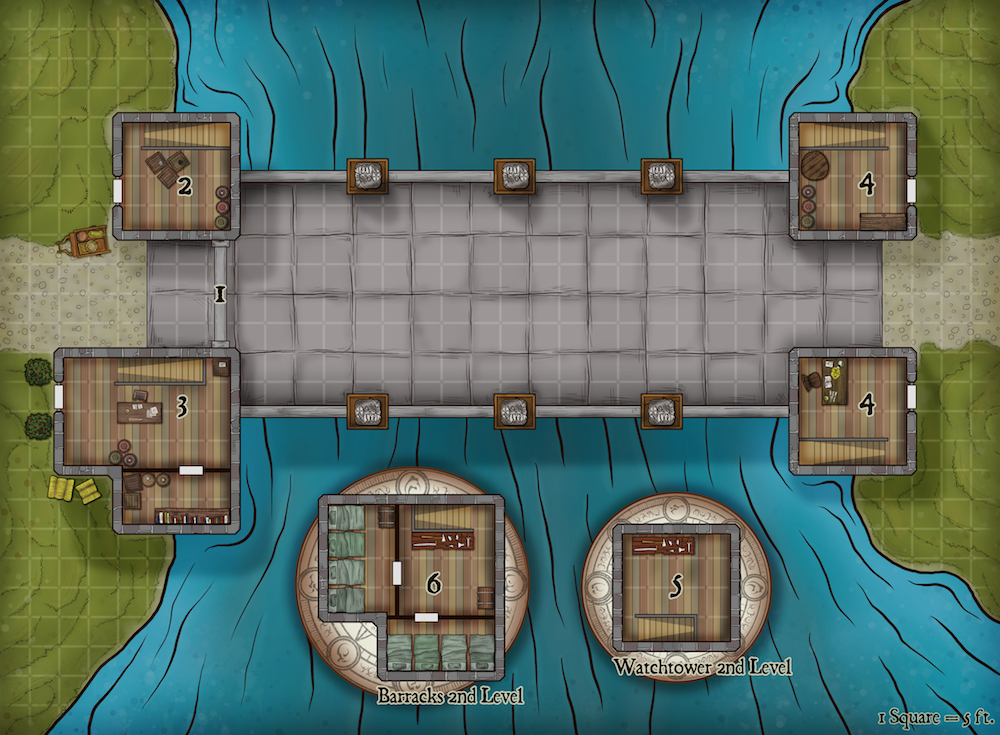 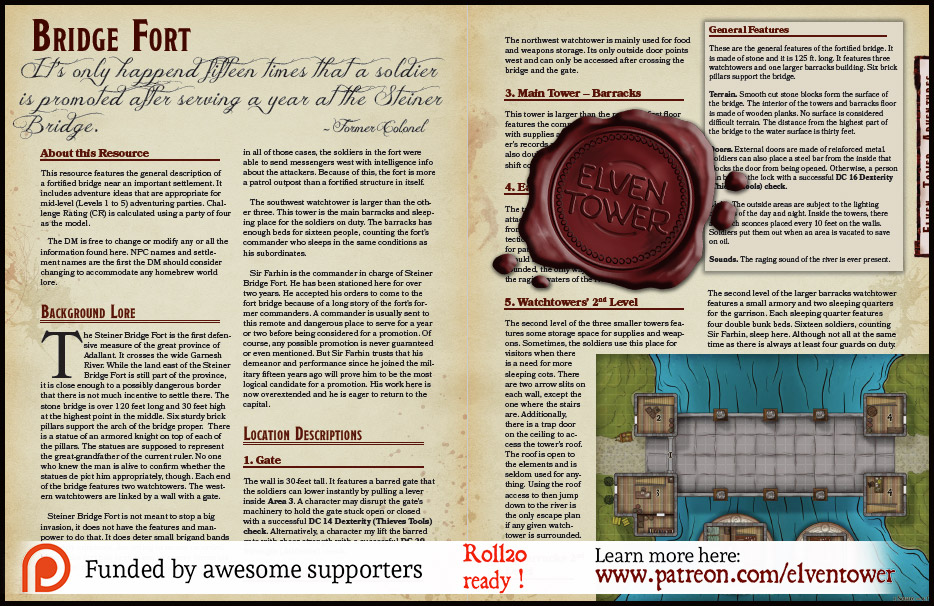 This resource features the general description of a fortified bridge near an important settlement. It includes adventure ideas that are appropriate for mid-level (Levels 1 to 5) adventur­ing parties. Challenge Rating (CR) is calculated using a party of four as the model.

The Steiner Bridge Fort is the first defensive measure of the great province of Adallant. It crosses the wide Garnesh River. While the land east of the Steiner Bridge Fort is still part of the province, it is close enough to a possibly dangerous border that there is not much incentive to settle there. The stone bridge is over 120 feet long and 30 feet high at the highest point in the middle. Six sturdy brick pillars support the arch of the bridge proper. There is a statue of an armored knight on top of each of the pillars. The statues are supposed to represent the great-grandfather of the current ruler. No one who knew the man is alive to confirm whether the statues depict him appropriately, though. Each end of the bridge features two watchtowers. The western watchtowers are linked by a wall with a gate.

The southwest watchtower is larger than the other three. This tower is the main barracks and sleeping place for the soldiers on duty. The barracks has enough beds for sixteen people, counting the fort’s commander who sleeps in the same conditions as his subordinates.

Sir Farhin is the commander in charge of Steiner Bridge Fort. He has been stationed here for over two years. He accepted his orders to come to the fort bridge because of a long story of the fort’s former commanders. A commander is usually sent to this remote and dangerous place to serve for a year or two before being considered for a promotion. Of course, any possible promotion is never guaranteed or even mentioned. But Sir Farhin trusts that his demeanor and performance since he joined the military fifteen years ago will prove him to be the most logical candidate for a promotion. His work here is now overextended and he is eager to return to the capital.

The wall is 30-feet tall. It features a barred gate that the soldiers can lower instantly by pulling a lever inside Area 3. A character may disrupt the gate’s machinery to hold the gate stuck open or closed with a successful DC 14 Dexterity (Thieves Tools) check. Alternatively, a character my lift the barred gate with sheer strength with a successful DC 20 Strength (Athletics) check.

The northwest watchtower is mainly used for food and weapons storage. Its only outside door points west and can only be accessed after crossing the bridge and the gate.

This tower is larger than the rest. The first floor features the commander’s desk and a side room with supplies and a bookcase with the commander’s records and other varied books. The main area also doubles as a kitchen every night after the day-shift comes back from patrol.

The two eastern watchtowers are open to enemy attacks. There is no gate preventing an intruder from accessing the bridge. Nor is there much protection for the actual tower doors. Guards stationed for patrol duty in these towers are in great danger should an enemy approach from the east. If surrounded, the only way to escape is by jumping to the raging waters of the river below.

The second level of the three smaller towers features some storage space for supplies and weapons. Sometimes, the soldiers use this place for visitors when there is a need for more sleeping cots. There are two arrow slits on each wall, except the one where the stairs are. Additionally, there is a trap door on the ceiling to access the tower’s roof. The roof is open to the elements and is seldom used for anything. Using the roof access to then jump down to the river is the only escape plan if any given watchtower is surrounded.

The second level of the larger barracks watchtower features a small armory and two sleeping quarters for the garrison. Each sleeping quarter features four double bunk beds. Sixteen soldiers, counting Sir Farhin, sleep here. Although not all at the same time as there is always at least four guards on duty.

These are the general features of the fortified bridge. It is made of stone and it is 125 ft. long. It features three watchtowers and one larger barracks building. Six brick pillars support the bridge.

Terrain. Smooth cut stone blocks form the surface of the bridge. The interior of the towers and barracks floor is made of wooden planks. No surface is considered difficult terrain. The distance from the highest part of the bridge to the water surface is thirty feet.

Doors. External doors are made of reinforced metal. Soldiers can also place a steel bar from the inside that blocks the door from being opened. Otherwise, a person can bypass the lock with a successful DC 16 Dexterity (Thieves Tools) check.

Light. The outside areas are subject to the lighting changes of the day and night. Inside the towers, there are torch sconces placed every 10 feet on the walls. Soldiers put them out when an area is vacated to save on oil.

Sounds. The raging sound of the river is ever present.