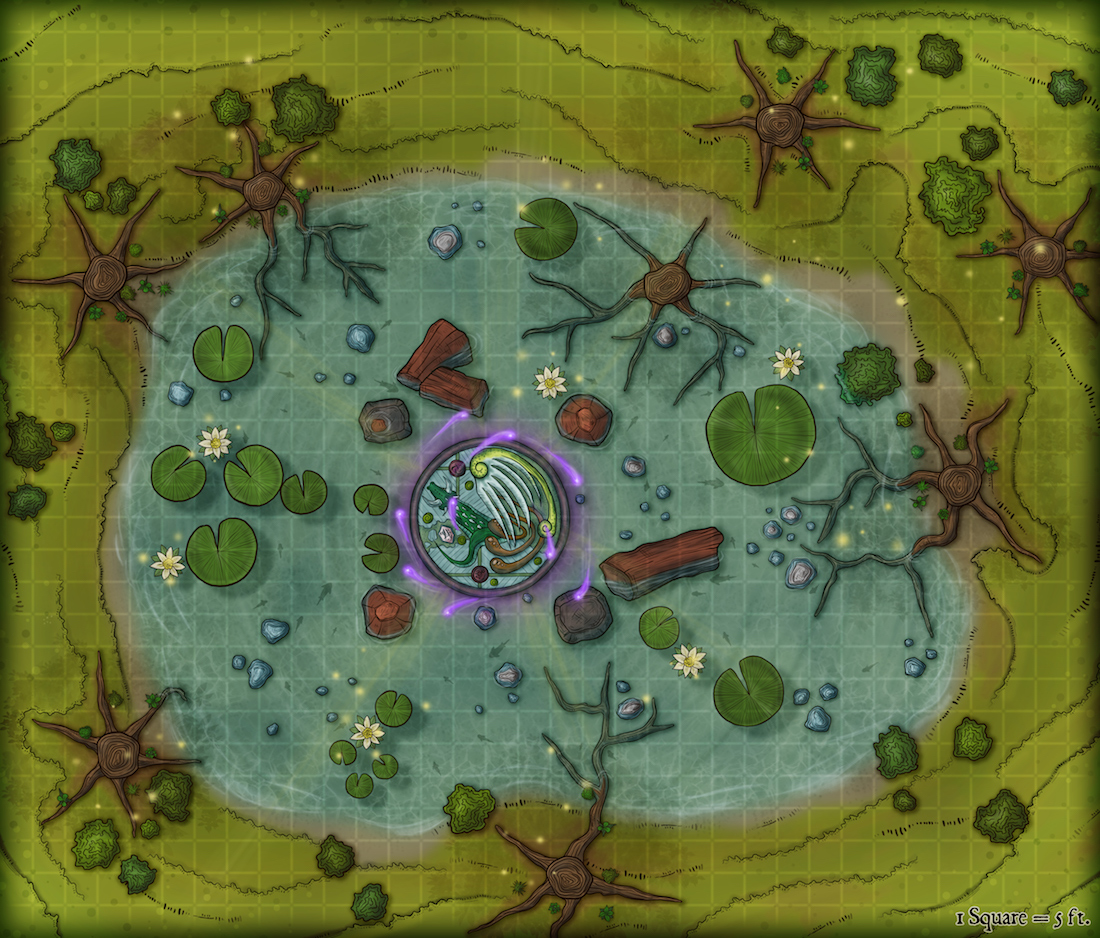 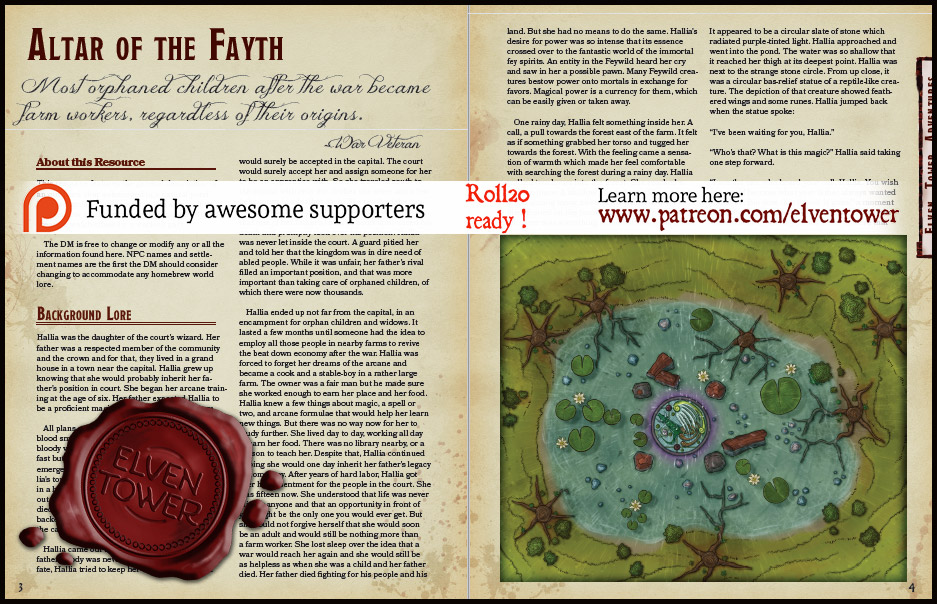 This resource features the general description of an outdoors altar submerged in a natural pond. The background lore is written like a story. It describes how a failed wizard got in contact with a fey creature which offered it a warlock pact.

Hallia was the daughter of the court’s wizard. Her father was a respected member of the community and the crown and for that, they lived in a grand house in a town near the capital. Hallia grew up knowing that she would probably inherit her father’s position in court. She began her arcane training at the age of six. Her father expected Hallia to be a proficient magician when she turned of age.

All plans and future expectations vanished in blood smelling wind when the kingdom started a bloody war against a rival neighbor. The war was fast but brutal. Though the kingdom eventually emerged victorious, the claws of war reached Hallia’s town and the capital. Hallia’s father placed her in a hidden basement during the conflict and went out to defend the town. Most men of fighting age died that day, Hallia’s father included. The enemies backed away hours later when reinforcements from the capital arrived.

Hallia came out to witness her town in ruins. Her father’s body was never found. Despite her harsh fate, Hallia tried to keep her wits and think. She would surely be accepted in the capital. The court would surely accept her and assign someone for her to be an apprentice with. So she traveled south to the capital with only the clothes she wore and a few belongings in a leather sack. She reached the capital and was let inside the city walls. It turned out that one of her father’s rivals in court announced his death and promptly took over his position. Hallia was never let inside the court. A guard pitied her and told her that the kingdom was in dire need of abled people. While it was unfair, her father’s rival filled an important position, and that was more important than taking care of orphaned children, of which there were now thousands.

Hallia ended up not far from the capital, in an encampment for orphan children and widows. It lasted a few months until someone had the idea to employ all those people in nearby farms to revive the beat down economy after the war. Hallia was forced to forget her dreams of the arcane and became a cook and a stable-boy in a rather large farm. The owner was a fair man but he made sure she worked enough to earn her place and her food. Hallia knew a few things about magic, a spell or two, and arcane formulae that would help her learn new things. But there was no way now for her to study further. She lived day to day, working all day to earn her food. There was no library nearby, or a person to teach her. Despite that, Hallia continued hoping she would one day inherit her father’s legacy in some way. After years of hard labor, Hallia got over her resentment for the people in the court. She was fifteen now. She understood that life was never fair for anyone and that an opportunity in front of you might be the only one you would ever get. But she could not forgive herself that she would soon be an adult and would still be nothing more than a farm worker. She lost sleep over the idea that a war would reach her again and she would still be as helpless as when she was a child and her father died. Her father died fighting for his people and his land. But she had no means to do the same. Hallia’s desire for power was so intense that its essence crossed over to the fantastic world of the immortal fey spirits. An entity in the Feywild heard her cry and saw in her a possible pawn. Many Feywild creatures bestow power onto mortals in exchange for favors. Magical power is a currency for them, which can be easily given or taken away.

One rainy day, Hallia felt something inside her. A call, a pull towards the forest east of the farm. It felt as if something grabbed her torso and tugged her towards the forest. With the feeling came a sensation of warmth which made her feel comfortable with searching the forest during a rainy day. Hallia walked two hours into the forest. She reached a strange place. A shallow pond of crystalline water stood among many trees. Many plants and water lilies floated on the pond’s surface. But oddest of all, there was something at the bottom of the pond. It appeared to be a circular slate of stone which radiated purple-tinted light. Hallia approached and went into the pond. The water was so shallow that it reached her thigh at its deepest point. Hallia was next to the strange stone circle. From up close, it was a circular bas-relief statue of a reptile-like creature. The depiction of that creature showed feathered wings and some runes. Hallia jumped back when the statue spoke:

“I’ve been waiting for you, Hallia.”

“Who’s that? What is this magic?” Hallia said taking one step forward.

“I am the one who heard your call, Hallia. You wish you could become what your father always wanted you to be. But now that dream is gone,” a moment passed when no one spoke and then, “unless you wish to hear my offer, you will never achieve that dream.”

“What is your name? I know of many magical entities and otherworldly beings,” Hallia bluffed, trying to remember her arcane classes from long ago.

“I have many names, but all of them are too long and complicated for you to ever learn or pronounce. You are getting distracted by menial things, Hallia. Here… have a feel of what I offer.”

A ray of purple light emerged from the statue and touched Hallia’s chest. The light widened until it covered her entirely. Then, Hallia felt the power. Arcane energy moved through her body like water and it obeyed every command she gave it. She remembered the arcane postures and verbal incantations from her father’s classes and used them with this newfound power. In a matter of seconds, Hallia discovered that the arcane knowledge she had was useless. She did not need any hand gestures or incantations; the magic obeyed her mind alone. She could shape the weave of magic as easy as modeling dough. And then the light vanished, and with it the power.

“The power I offer you comes from another world. You can wield it as if you were born in my lands. It is made for you. It calls you just as much as you call for it. And it is yours if you make a pact with me right here right now. I have nothing to ask from you right now, but one day I will. And when that day comes, you will do as I bid, or else the power I bestow on you is gone forever, along with any riches you might acquire along the way. I trust that you will try to recover your father’s position in court. With this power, it will take you no time. So, Hallia, what do you think? Will you accept this pact?”

Hallia stood silent. She stared at the reptile head in the statue just as much is it stared at her from beneath the clear water. The rain pouring over her was the only noise in the forest. Hallia looked up at the sky and thought of her long-dead father. Then she smiled…