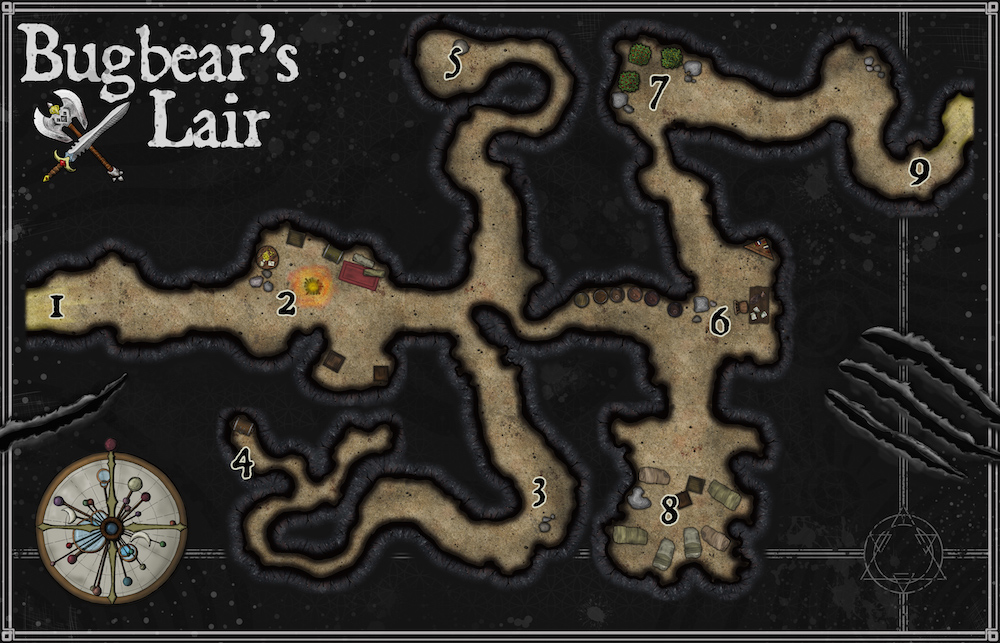 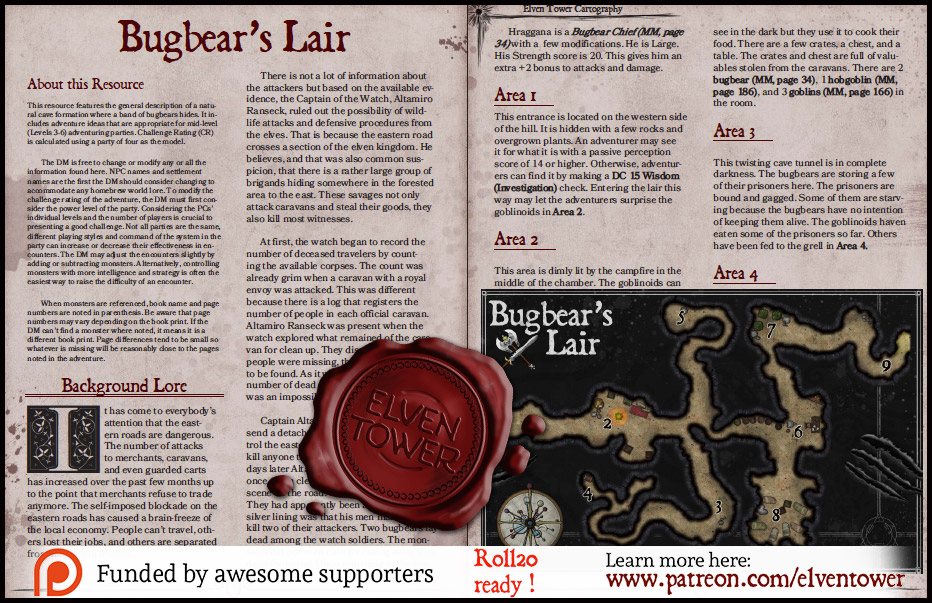 This resource features the general description of a natural cave formation where a band of bugbears hides. It includes adventure ideas that are appropriate for mid-level (Levels 3-6) adventur­ing parties. Challenge Rating (CR) is calculated using a party of four as the model.

It has come to everybody’s attention that the eastern roads are dangerous. The number of attacks to merchants, caravans, and even guarded carts has increased over the past few months up to the point that merchants refuse to trade anymore. The self-imposed blockade on the eastern roads has caused a brain-freeze of the local economy. People can’t travel, others lost their jobs, and others are separated from family and friends.

There is not a lot of information about the attackers but based on the available evidence, the Captain of the Watch, Altamiro Ranseck, ruled out the possibility of wildlife attacks and defensive procedures from the elves. That is because the eastern road crosses a section of the elven kingdom. He believes, and that was also common suspicion, that there is a rather large group of brigands hiding somewhere in the forested area to the east. These savages not only attack caravans and steal their goods, they also kill most witnesses.

At first, the watch began to record the number of deceased travelers by counting the available corpses. The count was already grim when a caravan with a royal envoy was attacked. This was different because there is a log that registers the number of people in each official caravan. Altamiro Ranseck was present when the watch explored what remained of the caravan for clean up. They discovered that some people were missing, their bodies nowhere to be found. As it was, knowing the real number of dead people or kidnapped people was an impossibility.

Captain Altamiro Ranseck decided to send a detachment of elite soldiers to patrol the eastern road. They had orders to kill anyone they found on the road. A few days later Altamiro Ranseck found himself once again cleaning up another massacre scene on the road. His men were dead. They had apparently been ambushed. The silver lining was that his men managed to kill two of their attackers. Two bugbears lay dead among the watch soldiers. The monsters did not even care for taking away their dead for burial. Upon returning to the city, Captain Altamiro Ranseck posted a public announcement on the city’s noticeboard. The watch offered a bag of gold coins as a reward for getting rid of the bugbear band. It was not a job for the regular townsfolk, not at all. There was a high number of errant adventurers and sellswords in town at any given time. It was more convenient for him to dish out a bag of gold from the city’s coffers than to lose more guards.

Far away from the city, deep in the forest but away from the elven patrols, the band of bugbears planned their next ambush. Bugbear tribes are always ruled by the strongest among them, the rule of might. The most powerful in that particular tribe was a huge bugbear named Hraggana. He was an oddity among his kin. He was almost twice as large as his brethren and just as strong. Bugbear society has no knowledge about medicine or the arcane whatsoever; If he had been born within a civilized community, a physician would have determined that he suffered a rare condition that made his body grow without control, even after puberty. Hraggana would have a shorter lifespan than other bugbears because of this. But for the time being, he was the strongest in the tribe.

The bugbears were not alone in their lair. Two hobgoblins and a group of smaller goblins are part of their crowd. They are there more under threat than voluntarily, as is often the case among goblinoid races. The whole lot of them are loyal followers of Hruggek, a lesser deity only worshipped by goblinoids. The bugbears have scouts near the eastern road that alert the group when a caravan approaches. Due to their constant attacks, the caravans are fewer and better protected but they have not posed a real threat to their strength.

The bugbear cave is a natural formation under a hill in the forest. The cave has two entrances on opposite sides of the hill. A pair of bears lived here when the bugbears first arrived. They killed the bears, ate them, and then claimed the cave as their own. If the adventurers track the bugbears back to their cave and approach it. The bugbear scouts will attempt an ambush before they reach the lair. The scouts will try to stealth their way into an ambush position. The adventurer’s passive perception score will determine who among them is surprised during the first round. Bugbears have a damage bonus on surprise attacks (2d6). The ambush team consists of 4 Bugbears (MM, page 34).

Hraggana is a Bugbear Chief (MM, page 34) with a few modifications. He is Large. His Strength score is 20. This gives him an extra +2 bonus to attacks and damage.

This entrance is located on the western side of the hill. It is hidden with a few rocks and overgrown plants. An adventurer may see it for what it is with a passive perception score of 14 or higher. Otherwise, adventurers can find it by making a DC 15 Wisdom (Investigation) check. Entering the lair this way may let the adventurers surprise the goblinoids in Area 2.

This area is dimly lit by the campfire in the middle of the chamber. The goblinoids can see in the dark but they use it to cook their food. There are a few crates, a chest, and a table. The crates and chest are full of valuables stolen from the caravans. There are 2 bugbear (MM, page 34), 1 hobgoblin (MM, page 186), and 3 goblins (MM, page 166) in the room.

This twisting cave tunnel is in complete darkness. The bugbears are storing a few of their prisoners here. The prisoners are bound and gagged. Some of them are starving because the bugbears have no intention of keeping them alive. The goblinoids haven eaten some of the prisoners so far. Others have been fed to the grell in Area 4.

The tunnel here is so narrow that it is considered difficult terrain. The ceiling is higher than in the rest of the cave. An evil Grell (MM, page 172) lives here. Hraggana decided to keep the creature there with no clear intention. He only knows that the monster is strong and it may become useful in the future. The grell does not mind the shared ownership of the cave as long as the bugbears feed him prisoners from time to time.

This cave tunnel is a dead-end. Hraggana built a crude altar to Hruggek here with stones and bones from their victims. It is a small thing near the west wall. Hraggana sleeps here, separated from the rest of the tribe. His bodyguard is a Hobgoblin (MM, page 186) named Gukk, he always stands by the narrow tunnel. If a fight breaks in Area 2, there is a 50% chance that the guard and Hraggana hear it and become alert.

This chamber is littered with more stolen goods from traveling caravans. There is a desk near the eastern wall with a log of all stolen goods. A goblin named Tinno knows how to write and has been keeping track of all stolen stuff and also the prisoners. The prisoners’ log includes a register of all kidnapped travelers as well as which of them have died of starvation, which of them have been eaten by the tribe and which of them have been fed to the grell. Over the past months, 36 unfortunate people have died one way or the other. There is a registry of 15 current live prisoners. There are 2 Bugbears (MM, page 34) and 10 Goblins (MM, page 166) in this room. If a fight breaks out here, the goblinoids in Area 8 are aware of it.

There are three berry bushes in this part of the cave. They get almost no outside light but they still have grown healthily. The berries are poisonous, the bugbears care for them as a natural trap for invaders. They are also trying to come up with a way to weaponize the berries poison and use it on their weapons but they have not achieved success yet.

The tribe sleeps here. There are a few sleeping cots around the room. These sleeping cots were stolen from caravans too. Most of them sleep on the floor. There are 2 Bugbears (MM, page 34) and 5 Goblins (MM, page 166). There are three times as more of each in the room, but they are females and children, non-combatant. If the goblinoids are aware of a fight in Area 6, the combatants will attempt to ambush the party by hiding in the natural alcoves on the walls.

This is the eastern entrance to the cave. It is not hidden and it is the closest to the eastern road. The adventurers will likely enter the natural cave this way. The entrance is unprotected because it relies on the scouts for protection and the poisonous berries in Area 7 for added safety.

These are the general features of the bugbear lair. The bugbears have not developed the cave in any way. It is of natural origin.

Terrain. The floor is rough unworked soil. There is not much difference I elevation between the two entrances. It does not impede movement in any way. The passage that approaches Area 4 is narrow enough to be considered difficult terrain.

Light. The cave’s inhabitants can see in the dark. Most of the cave is in complete darkness. The only exceptions are both entrances and Area 2 where the bugbears have a fire camp for cooking.

Smells and Sounds. The sounds of goblinoid chatter permeate Areas 6, 8, and 2. These sounds may be audible for visitors with keen ears in the other areas of the cave. There is a faint clicking sound in the passage near Area 4. The source is the grell.