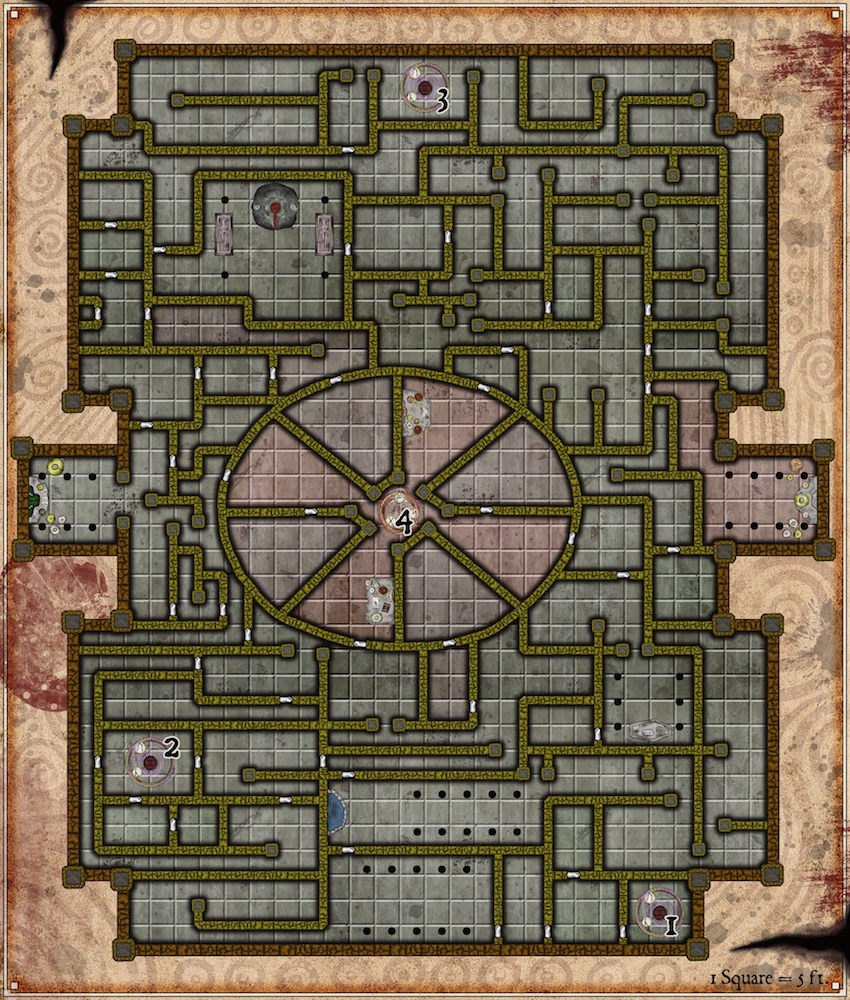 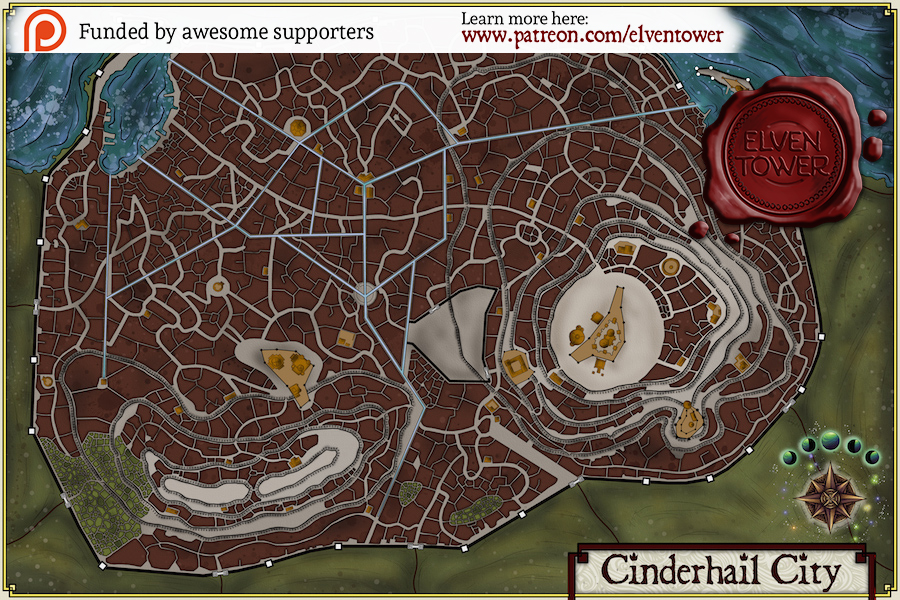 This resource features the general description of a pocket plane created by a ruthless mage. It exists as a bubble in the astral plane. It includes adventure ideas that are appropriate for mid-level (Levels 6 to 10) adventur­ing parties. Challenge Rating (CR) is calculated using a party of four as the model.

It was a fateful night when the renowned crown mage Ardolotenth made an astounding discovery in his arcane lab. He was a researcher of the unknown, the occult. The young king agreed to his research years ago, convinced that whatever breakthrough he made would ultimately be good for the kingdom. Little did he know that he was the subject of a spell himself. Ardolotenth had the king charmed as soon as he inherited the throne from his late father. The young king was not mentally strong and could not resist the charm. Ardolotenth used this new influence to further his own goals with the crown’s sponsorship.

Researching the occult side of magic was a profitable endeavor. He never fancied using the same magic and the same power source as everybody else. The old arcane tomes were clear about this. Magic is nothing but the manipulation of the magical weave. The fabric that forms all things and planes. The techniques available to today’s magic users were nothing but the tip of the iceberg. The dragons knew about this. They research forgotten magic for centuries in order to retrieve the magic secrets from the past. Archeological remains prove that giants were privy of the same arcane secrets eons ago when their civilization reached its peak. It is theorized that giants kept elves as slaves and taught them a few magic principles. These ancient elves and their magic are the roots of today’s arcane field among the humanoid species. It is the evolution of a tiny branch of magic passed down by elven servants.

Not many know about this. People are more inclined to think that a wizard is a keeper of secrets. A guardian of ancient lore and mysterious power. If only they knew that they only had access to the prologue in the great book of magic. Ardolotenth spent almost 7 years researching the relationship between matter itself and the weave of magic. This was more the realm of mathematics than magic itself. His objective was to find the mathematical equivalence between a pound of silver and the amount of magic power needed to recreate it. Some scholars would have called this alchemy, they missed his point. Ardolotenth’s objective was not to transmute silver into something else. The dark branch of magic he researched was the powerful magic of creation. Not the creation of a physical thing in the material plane of existence. It was the creation of a physical thing outside of the material plane of existence but also detached from any other existence in the multiverse. In other words, the creation of a plane. Ardolotenth was, of course, limited in what he could bring forth from the ether into existence by his own power. Ardolotenth’s first creation was an extraplanar maze. The place existed outside of any world and was, for all intents and purposes, undetectable and impregnable. At least according to him.

Things went bad for him when it was discovered by another crown mage that the king had been under a charm spell. The king, now free of any magic influencing his actions, demanded all registered crown mages to immediately appear before him for an interrogation. Ardolotenth chose not to go. The king suspected he was behind it, for obvious reasons, and sent a detachment of the city watch to his tower. The men had instructions to arrest him. Another crown mage came with them for the sole purpose to neutralize Ardolotenth’s spells, if he chose to resist.

When the law enforcers breached the tower’s main door, they found themselves in a great chamber with no furniture. The only thing of importance was an elaborate magic circle drawn on the floor. The circle had other circles inside it, all of them inscribed with runes of power. Some of the runes were known to the crown mage but others were alien. Like scribbles made by a child who cannot write yet. The mage misinterpreted the situation and decided that the magic inscription on the floor was inert and safe to walk on. They made a terrible mistake, the magic circle was properly drawn, but it used new magic facets from Ardolotenth’s research in the occult. All of the invaders were instantly transported to the pocket plane. They were trapped in Ardolotenth’s maze.

The men did not return to the king’s court. Now the king is willing to try a different approach. He is not eager to sacrifice any more crown mages. His messengers and envoys have now spread the word that the court is hiring mercenaries for an important work. It goes without saying that the court pays very well.

Should the adventurers decide to investigate Ardolotenth’s tower, they will find the same chamber with the strange magic circle. The only way to cross the room is by walking on it. No spellcaster would be able to determine that the circle does anything because the magic symbols are wrong or strange. A spellcaster might determine that the circle was inscribed by a person not versed in magic as if it were purely decorative.

Once the party is transported to the extraplanar maze, roll 1d3 to determine their starting location on the map. There are three teleportation circles where the party may arrive to. The circles are one-way only. Additionally, all teleportation magic that might allow a person to leave the place is disrupted in the maze. The only way to return to the material plane is to find the two altars (which are located in the middle west and middle east side of the map) and perform the magic ritual depicted in a stone slab next to each altar. After performing both rituals, the teleportation circle in Area 4 activates. Any spellcaster can use this circle to activate a teleportation effect equivalent to the planeshift spell and return to the material plane.

It is not within the bounds of this resource to determine what creatures or encounters the adventurers may have in this extraplanar location. The DM is free to determine the exact conditions under which the adventurers will be able to leave. The style of game is also important to take into account because, while one group might enjoy a kick-the-door style of game with monsters and traps in every room, other groups might enjoy a more investigative style of game.

These are the general features of Ardolodenth’s pocket maze plane. It can only be accessed through the trap-room in his tower or by finding its physical location in the infinite astral plane.

Terrain. The floor is made of granite tiles. The walls are made of granite blocks. If either is removed, there is rough grey soil behind them. Digging a tunnel through this soil is possible but it leads nowhere. This material extends infinitely outwards in every direction from the maze.

Doors. All doors are sliding granite panels. They open and close automatically if a creature comes within 10 feet of the door.

Light. Most of the maze is in complete darkness. The altars and the teleportation circles radiate their magic auras in the form of visible light. Those locations are dimly lit.

Smells and Sounds. There is a pervasive scent that is similar to alcoholic balms used by doctors to clean wounds. A low-volume thumping sound comes from the floor. It sounds like a heartbeat but it does not have a physical source. A detect magic spell determines that the sound does not actually come from the floor, it is only an auditory illusion spell.