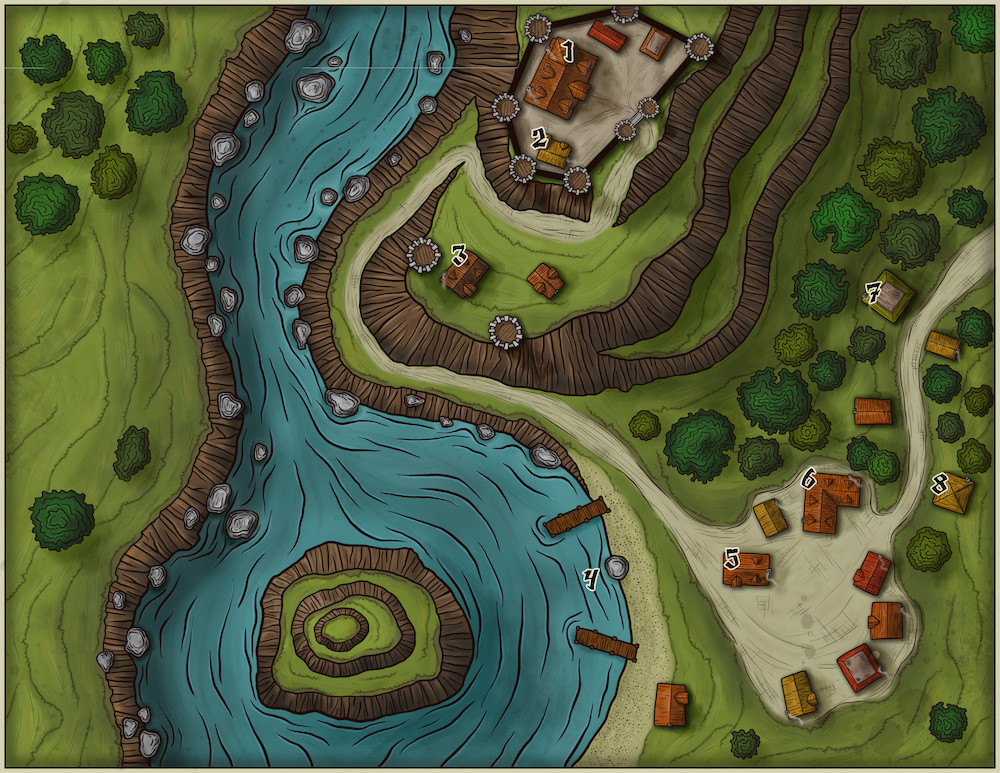 This resource features the general description of a small town settled next to a river. Its main export is great cheese rounds and wood from a nearby logging camp. It includes adventure ideas that are appropriate for low-level (Levels 1 to 5) adventuring parties. Challenge Rating (CR) is calculated using a party of four as the model.

Greenround Town is a very small town located on the riverbed of Barge’s Way, a slow flowing stream. On the northern side of town, there is a rock formation that forms a steep hill known only as Red Hill. There is a fortified manor on top of the hill that belongs to Lord Camille Ademeo. A little lower on the hill, there are two buildings and two defensive towers. Both towers and the manor are located in such a way that they take advantage of the zigzagging path that climbs the hill. At floor level, there are only a dozen other buildings. Greenround Town does not have any kind of wall or surrounding fortification. In the few cases when the town has been attacked by brigands or orc bands, the populace flees with whatever they can carry to the towers or the fortified manor house. These constructions have never been breached by attackers. There is another rock formation that erupts from the middle of the river. The place is currently undeveloped but there are many plans on how to take advantage of it.

The only road goes east through the forest and eventually finds a well-traveled road after one day of travel. Near the road, two hours from Greenround Town, there is an active logging camp. Many of the lumberjacks live in Greenround Town but others come from different places.

Greenround Town is a settlement that came from nothing and has been growing in size steadily for the past two years. It all began almost 40 years ago when Lord Camille Ademeo inherited his lordship from his father. It came with a lot of money plus tithes from the province his family protected. Lord Camille was a lover of nature, peace, and lonely places. He used part of his fortune to build a lavish manor on top of a hill next to what would become Greenround Town in the future. Lord Camille Ademeo was married to a half-elf woman named Shadeira as part of an arranged union thought out by their parents. Shadeira was quite older than him by human standards but they looked more or less the appropriate age for a married couple if you would disregard her obvious elven features. Shadeira was a practitioner of magic. Over the years they had one son and one daughter. The son, Jason, is currently 29 years old. A fair lad, still unmarried and well trained to take his father’s place when he passes away. The girl, Luciana, is 24 years old.

Luciana developed magical abilities similar to her mother’s at a young age. While she was talented, when she tried the manipulate the magic weave, it sometimes refused to do her bidding. Her mother suspected it was her mixed blood playing a bad one on her. Her brother was never interested in those activities, preferring to learn how to ride and use weapons. Five years ago, the town was attacked by a lone ice giant during the winter season. The evil creature started to climb the steep hill to the manor house while a few brave men shoot arrows at it with no success at harming it. Luciana and her mother Shadeira used their magic to fight the monster from one of the watchtowers that surround the manor. Luciana overreached with her magic and it backfired in a way. She was trying to burn the giant with arcane fire but the magic weave bounced violently causing a great ball of fire to burn the giant and half of the hill. The watchtower next to the bottom of the hill burnt to ashes too. Arcane eddies of energy remained visible for a few days after that. The leftover magic embedded on the very soil caused a rare type of flower to grow from the cliff sides of the hill. The flowers were unknown to all, but apothecaries soon discovered they had magical and alchemical properties.

Since then, a number of botanists, alchemists, apothecaries, healers, and herbalists visit the place often. A few of them stayed and settled next to Red Hill, within sight of the manor house. The town has grown steadily and now harbors a permanent population of almost ninety people. The location is a privileged one because of the river. Barger’s Way owes its name to a great number of merchant barges that flow south from the great capital to the north. Because of this, the town became a type of resting location in the middle of long trips. A moderately sized inn was built and now many merchants stay for a night or two on a regular basis.

One of those merchants was Felito, he was a rancher who specialized in cheese. He saw the opportunity and settled in town. After that, he made arrangements with merchants that come through the river often to sell him milk from the northern towns. Felito lives in the easternmost square house on the road. His cellar is a great chamber where he brews great cheese wheels. He then sells them to the same merchants who bring them south and sell them for a profit. Felito’s cheese wheels are made with a special kind of moss that sticks to the outside crust of the wheels. This gives them a green-tinted color. Felito’s cheese business became an instant success. The wheels are known colloquially as “greenrounds”. After some months of these wheels being the only real export of the town, the place became known as Greenround Town. Felito does not take credit for giving the place its name but he is happy it turned out this way.

Lord Camille Adameo will be 64 years old this year. His health is frail and the local bloodletter predicts he won’t see the end of the year. He is bedridden and does not handle any state business anymore. His son Jason Adameo is the de facto ruler of Greenround Town since six months ago.

Currently, the town is in a state of distress because of Jason Adaemo’s recent decision about the town’s future. A month ago, a guild of gnomes approached him with a profitable offer. The gnomes wish to build a bridge that crosses the river from east to west to the western lands. The bridge will make use of the rock formation in the middle of the river as its foundation. The gnomes offered Jason Adameo a great sum of gold ingots, plus a percentage of the bridge tolls. All that sounds good, except that the gnomes construction work will probably obstruct the passage of barges through the river because the bridge’s pillar foundations will take a lot of space. Greenround Town is growing but it has a great problem. Since it is not supported by the necessary farmed land, it depends completely on imports and exports to survive. The construction of this river will surely stall its growth and maybe even make it disappear. In the best scenario, the town would ultimately benefit from the new trade routes to the west, but the construction of the bridge would suffocate the frail local economy. People are still deciding how to react. The situation is precarious because the town came to be only because people moved next to the private property of Lord Camille. He will be dead soon, and his son Jason thinks the town will probably suffer and then become stronger after the bridge is finished.

There is another situation of interest east of town in the logging camp. The logging camp appeared as a consequence of the increased traffic in the area and the proximity to the river. Bara Saren is the owner of the operation. They gather wood and timber, bring it to Greenround Town and then ship it south to sell it. The problem is that they are now logging in an area of the forest protected by three druids. The druids do not wish to start a conflict but the loggers and Jason Adameo have ignored their requests to find another logging zone. They started by sending wildlife and animals attack and scare loggers. Bara Saren reacted by hiring hunters and a few armed guards. Things escalated last week when two guards were mauled to death by a pack of bears. Things are a little cold as of now, but Bara refuses to leave the camp. If no other outside force reacts to this situation soon, the forest will be painted red one morning.

These are the general features of Greenround Town. The town is located next to the riverbed of a slowly flowing stream named Barger’s Way

Terrain. The soil around Greenround Town is fertile but not yet developed for farming. The eastern side of town is surrounded by forest.

Light. Greenround Town lives under the shadow of Red Hill, the rocky outcropping where the fortified manor is located. Depending on the time of the day, a small or big part of the town may be under the hill’s shadow.

Smells and Sounds. The sound of water flowing from Barger’s Way is ever present. Other than the humidity in the air, people on the eastern side of town will surely notice the milky-cheesy smell coming from Angelo’s house, he is the cheese maker.