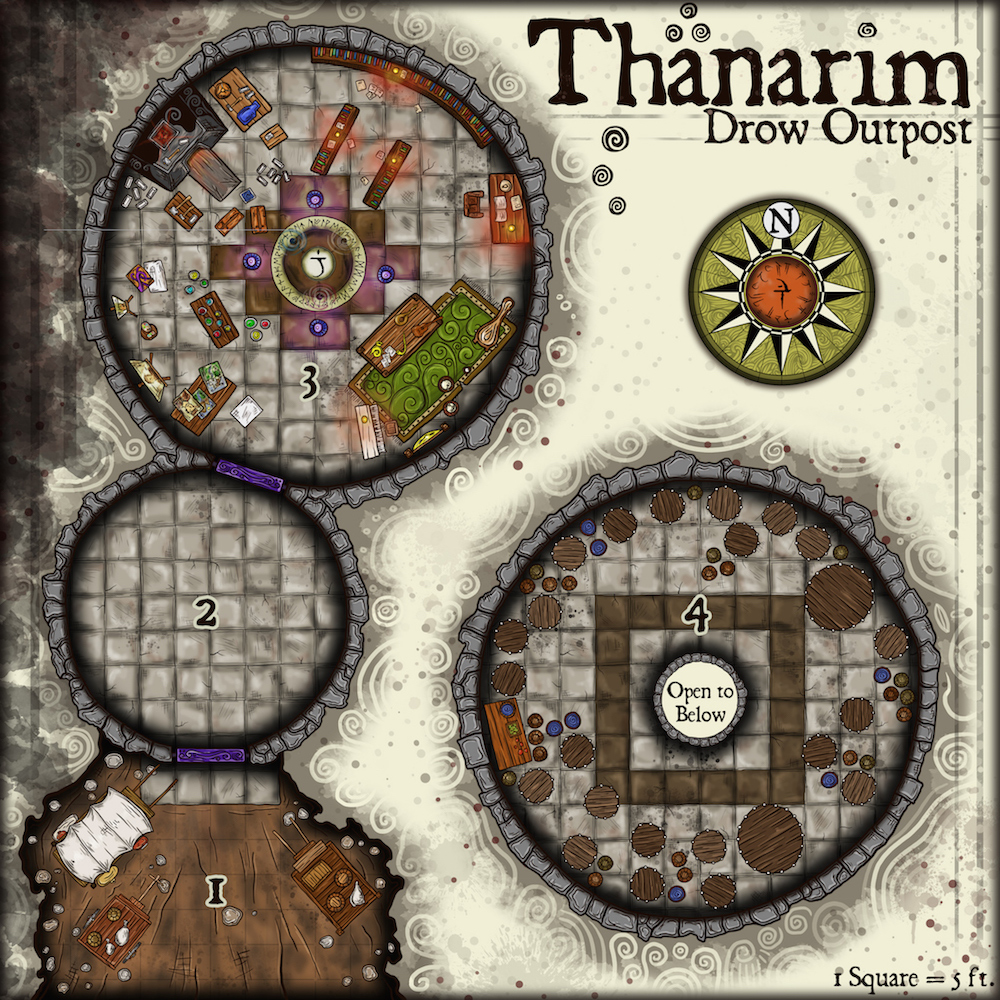 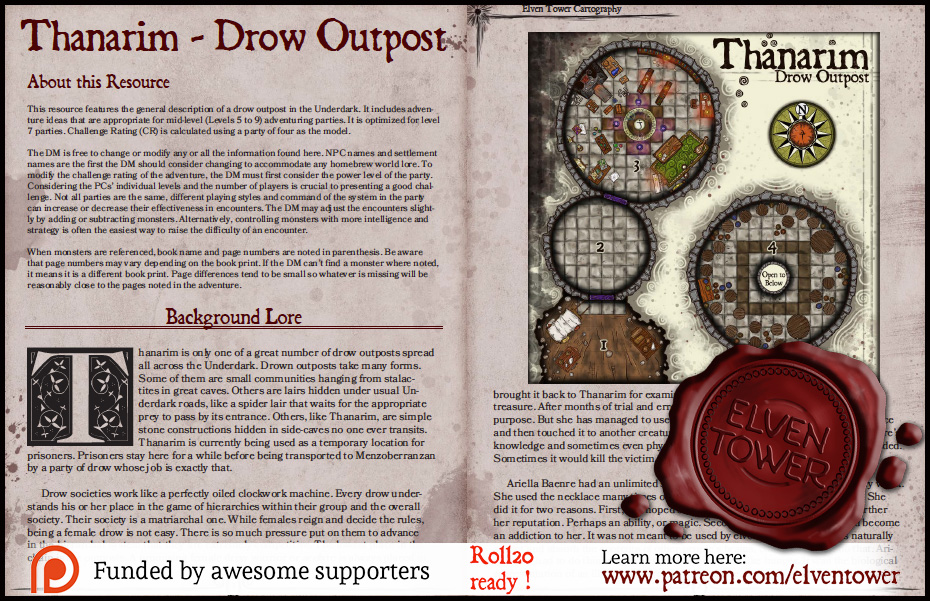 This resource features the general description of a drow outpost in the Underdark. It includes adventure ideas that are appropriate for mid-level (Levels 5 to 9) adventuring parties. It is optimized for level 7 parties. Challenge Rating (CR) is calculated using a party of four as the model.

Thanarim is only one of a great number of drow outposts spread all across the Underdark. Drown outposts take many forms. Some of them are small communities hanging from stalactites in great caves. Others are lairs hidden under usual Underdark roads, like a spider lair that waits for the appropriate prey to pass by its entrance. Others, like Thanarim, are simple stone constructions hidden in side-caves no one ever transits. Thanarim is currently being used as a temporary location for prisoners. Prisoners stay here for a while before being transported to Menzoberranzan by a party of drow whose job is exactly that.

Drow societies work like a perfectly oiled clockwork machine. Every drow understands his or her place in the game of hierarchies within their group and the overall society. Their society is a matriarchal one. While females reign and decide the rules, being a female drow is not easy. There is so much pressure put on them to advance in the hierarchal system that they are extremely competitive. The lowest place in the chain is the outposts. A promising female drow warrior or acolyte is always placed in the lowest place possible for her to advance and find her place in the world. The farther the outpost is from Menzoberranzan the lower the perceived rank it conveys upon the people assigned to it. Not only that, but female warriors in charge of these outposts are so competitive they do not last long in the farthest outposts before either being promoted or demoted into oblivion. Some of the worst are condemned to judgment by the spider matron herself. Many driders owe their deformed shape to failing to uphold a drow outpost.

Ariella Baenre is a drow priestess of Lolth who recently found herself in a difficult situation. She was assigned a remote outpost years ago when she was just an acolyte and failed horribly. The only thing that saved her from the worst of fates was her family name and a good recommendation by an aunt to be left to train a few more years. Ariella became a priestess in the drow city and was then assigned to lead the Thanarim outpost. Thanarim is nothing but a temporary place for prisoners whose fate is to fight for their lives in a new arena in Menzoberranzan. It is not a complicated place to run at all, a group of male drows could do it by themselves. But the matriarch priests placed Ariella here just to insult her and her family. The work in Thanarim is so dull that it will take Ariella years to prove that she has done a better job than the previous one.

Things changed a few months ago when Ariella and her group of drow patrolled the area surrounding the outpost. A few miles from Thanarim they found a dead illithid. The formidable mind flayers were possibly the strongest foes in the Underdark. The drow were not fond of them whatsoever but Ariella’s group would probably have fled if they had seen it alive. It was no use to try to kill a living illithid and lose some of her guards. It would have been another failure to stain her reputation. But the creature was dead. A quick examination showed it had several sword wounds. The creature had a fight with someone braver than Ariella and fled with deadly wounds. The illithid had nothing on his person except his tunic and a strange necklace with clockwork machinery.

Ariella took the necklace and brought it back to Thanarim for examination. The necklace proved to be a valuable treasure. After months of trial and error, Ariella still ignores the way it works or its purpose. But she has managed to use it. She discovered that if she wore the necklace and then touched it to another creature’s forehead, it could absorb the other creature’s knowledge and sometimes even physical abilities. It did not work all times as intended. Sometimes it would kill the victim or render it mentally impaired permanently.

Ariella Baenre had an unlimited supply of prisoners that came and went every week. She used the necklace many times on the prisoners to absorb their knowledge. She did it for two reasons. First, she hoped she could learn something that could further her reputation. Perhaps an ability, or magic. Second, the necklace’s effect had become an addiction to her. It was not meant to be used by elves. Mind flayer brains naturally accept and absorb the contents of other people’s brains, but elves cannot do that. Ariella now had to do this every few days. For her, it felt like hunger. It was the biological representation of an illithid’s hunger for brain tissue, but in an elven brain. As an additional side effect, Ariella found an academical need to put the things she learned in practice. It was not curiosity, nor was it pride. It was her unprepared brain trying to make sense of knowledge and memories that did not have any backing in real life experiences. Ariella had a section of the outpost remodeled as a laboratory/workshop of sorts. She had many different musical instruments from the surface, she was masterfully proficient with all of them. She also had a small studio with paintings and other graphical art representations. She built a forge there and was good enough making swords and simple armors. The place also holds a small library and a desk where she writes poetry and books, abilities she did not have before. Ariella also now speaks over twenty different languages. She has also learned a few arcane spells from prisoner wizards. She found that, unlike them, the spells stayed ingrained in her mind so a spell book was unnecessary. Revealing her ability to create arcane effects such as those was a tricky subject, however. She knew it could be seen as heresy by the other Lolth priestess.

The other drow guards in the outpost do not have the authority to question Ariella in her activities, but they are not comfortable with all her strange behaviors. Ariella’s plan is the same. One day she will acquire knowledge or abilities that will let her climb the social ladder of drow society.

Thanarim is a prison outpost. There are two ways to implement a location such as this in an adventure. The first one is to have an important NPC captured by drow. Then the party will either go rescue the NPC or they will be hired to do so. A second scenario involves the party being attacked and captured by drow. They are later brought to Thanarim temporarily before they are transported to Menzoberranzan.

The cave that leads to Thanarim is one mile long. It connects to a well-traveled road in the Underdark. The cave is in complete darkness. Outside of the outpost, there are three carts. A quick examination reveals that the harness in each of them is designed to be pulled by a giant spider. A group of drow scouts whose job is to capture people and travelers is here. 3 Drow (MM, page 128), 1 Drow Elite Warrior (MM, page 128) and 1 Drow Mage (MM, page 129) will attempt to ambush anyone who approaches the outpost. They can see people approaching with lighted torches from half a mile away.

The door to the outpost can only be opened by singing a poem written by Ariella, only the guards inside know the poem. The door can also be forced open with a dispel magic spell DC 15.

The room is littered with sleeping pads and personal affairs that belong to the outpost guards. The ceiling is 40 ft. high. There are 4 Giant Spiders near the high ceiling. At any given time, there are 1d3 Drow Elite Warriors (MM, page 128), and 2d6 Drow (MM, page 128) here. There is a 20% chance that Ariella Baenre is here too, meditating.

This is Ariella Baenre’s workshop. She performs all the abilities she has stolen from prisoners here. There is a table with many musical instruments, two stringed instruments similar to lutes, two brass instruments, a harp, percussion, and a piano. Near the west wall, there is a painting studio. Ariella crafted the paints with minerals. The north side of the room features a forge. There is also a small library and a desk with Ariella’s work. There is a magic circle in the middle of the room. Four squat pillars surround it. The circle creates a levitation effect that lets any creature that stands on it reach the second level, Area 4, through a circular hole in the ceiling.

There is 60% chance that Ariella Baenre is here performing in any of the small workshops in the room. She has an Invisible Stalker (MM, page 192) with her. It follows her commands and protects her.

There are 24 cages in this room. All of them have wooden floors and iron bars. There is an assortment of barrels with food and water across the room. Ariella Baenre is here if the party did not encounter here in any of the previous areas. The room is always guarded by 2 Drow Elite Warriors (MM, page 128) and 3 Drow (MM, page 128).

Ariella is a Drow Priestess of Lolth (MM, page 129), but she also has access to the spells prepared by a mage. She does not need a spellbook to cast or prepare any of those spells. The DM should be wary because this oversteps a few rules. It is intended for flavor purposes.

These are the general features of Thanarim. It is located in a side cave, in a section of the Underdark that is relatively close to the surface.

Illumination. The cave is in complete Darkness. Inside the outpost, only Area 3 is dimly lighted by a few candle holders.

Doors. The two doors that connect the areas in the first level are giant slabs of a rocky material tinted blue. The become ethereal when a person sings a drow poem to them. The poem is only known to the outpost guards. (See Area 1)