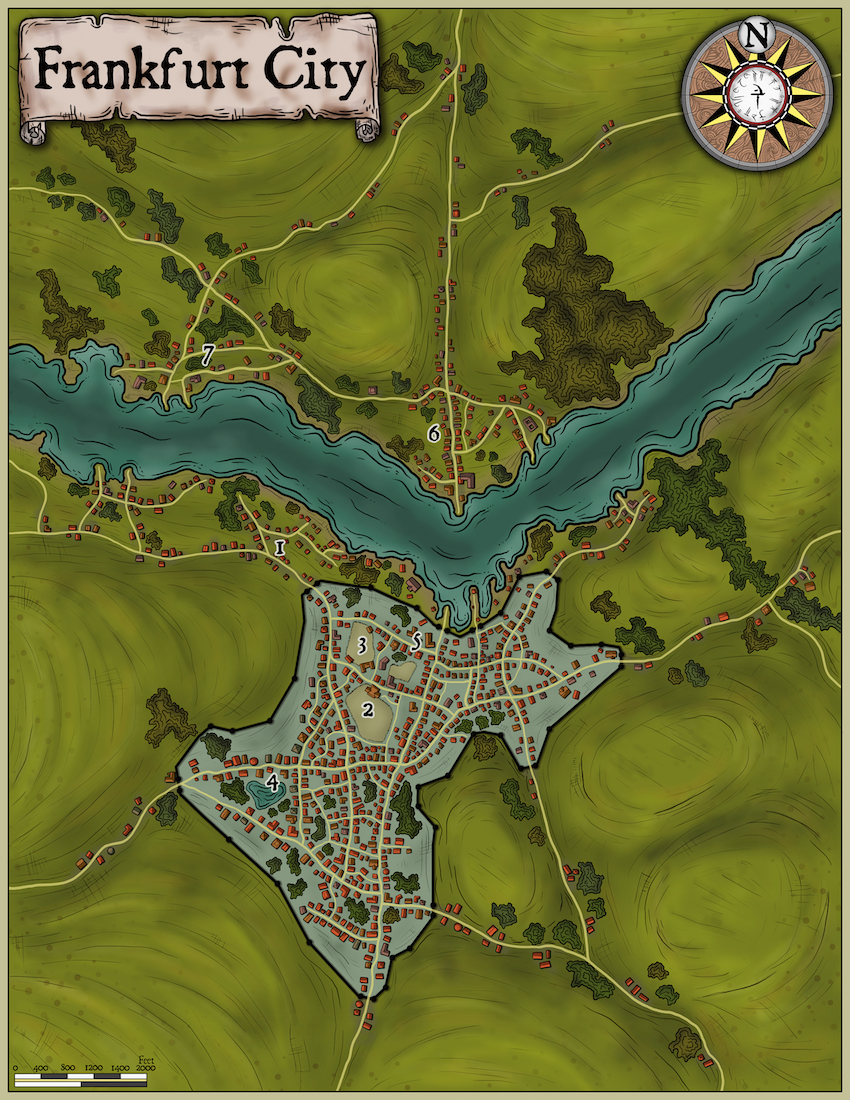 This resource features the general description of Frankfurt City. There is a brief description of some important NPC’s in the area and ongoing plots. It includes adventure ideas that are appropriate for low-level (Levels 1 to 5) adventuring parties. Challenge Rating (CR) is calculated using a party of four as the model.

Generations ago, a group of merchants and farmers settled a small village on the shores of Darma River. The region was already a well-traveled place. It is located in between of many other great cities’ territories. Plenty of travelers, merchants, and even brigands or other evil willed folks passed through it all along the year. The small village of Frankfurt became a popular crossroads rest location. It was only natural that businesses such as inns, taverns, hardware shops, and blacksmiths became the most profitable overnight. The village grew, and after two generations, it was as big as other nearby cities. Back then, Frankfurt City’s Royal Representative, a rank comparable with governor or major except it is also inherited to offspring, was Yullon Gurgle.

Representative Gurgle applied for a royal credit and spent years wooing the royal court to get it approved. The crown eventually authorized an expense of one-hundred thousand gold coins for the construction of a wall for Frankfurt City. The money was enough. Not only did Representative Gurgle built the wall, but he also paved all roads and built a manor house and training barracks for the watch.

The construction of all these features took almost a generation. Representative Yullon Gurgle was almost eighty years old when the last block of the wall was placed. He passed away a week after that, having seen the work of his life completed. His grandson is the current Royal Representative in Frankfurt City, his name is Dallion Gurgle.

One thing about Frankfurt City that strikes the eye is the lack of bridges to connect the city proper to the northern side of Darma River. The construction of a bridge was judged to be too steep an expense every time someone has proposed it. The city is still indebted to the crown for the construction of the wall. An important factor is also the availability of transportation barges on both sides of the river. The lack of bridges and plans to build one eventually motivated a lot of townsfolk to build long flat barges to transport all kinds of goods across the river. The peasantry can cross the river for as cheap as a copper coin, as long as the barge is full. It only takes a few minutes to cross the river.

Frankfurt City is a peaceful place. There are important settlements in every direction which belong to the same kingdom. This means that even direct confrontations or wars against neighboring kingdoms have never reached this far. Because of this, there is a false feeling of safety. Ultimately, this is Frankfurt City’s biggest flaw. The lack of threats over generations has made the settlers comfortable and unready to take on a complicated situation. The walls are sturdy but unmanned. The city watch and militia are underfunded because there has never been a real need to have a strong military position. If Frankfurt City was attacked by a sizable force, it would probably fall within a day, it is not prepared for conflict. Worst of all, the south gate’s portcullis machinery broke apart a few months ago and no one has cared to repair it. Instead, the portcullis itself was removed from the gate. Thus, the south gate is permanently open.

Dallion is the current Royal Representative. His title is a weird invention of capital’s court. As stated, he is not a noble but the title is inheritable. That is why the Gurgle family have been in charge of Frankfurt City since it was first settled five generations ago. But they remain peasants in the service of the crown. Past members of the family took on the title with motivation and honor, but Dallion thinks differently. He feels the title is an insult to his family. After five generation of servitude keeping the city growing and thus, earning gold for the crown, his family should become noble. His ideas are not very popular with the rest of his family. Dallion is almost thirty years old. He already has four kids: two boys and two girls. Dallion spends a lot of time in his office reviewing the city’s accounting documents. He is sick of paying gold back to the capital. To this day, the city is still paying for the credit to build the walls. Dallion thinks the city is slave to the capital because of this. He is seriously considering refusing to pay next time the crown’s collectors show up. This might invoke the ire of the king.

Damaris is Dallion Gurgle’s eldest daughter. She is twelve years old. Damaris always wears delicate dresses and wears her hair in an elaborate braid. She is often seen around the manor house or the surrounding streets with a bug net claiming to be hunting for fairies. She sometimes catches butterflies. Everybody thinks she is just being a funny little girl but the reality is darker than that. Damaris does not pretend to see faeries, she actually sees them because her mind is subject to an enchantment spell no one knows about. An evil woman who lives two streets from the manor house is an evil hag who is using Damaris to further her goals. Despite her instincts to eat the kid, the hag plans to use her to spy on the Royal Representative. If she would have it her way. She’d find a way to get rid of Damaris’ older brother, and heir to his father. She would then arrange for Damaris to be wed to a weak man who will not stand in her way.

Dan is the owner of the biggest and oldest tavern in Frankfurt City. The tavern was the only one back then when Dan’s great grandparents built it. Since it was the biggest edifice in town, they named it Frankfurt Tavern, an unimaginative name that stands to this day. Dan tried to be a sailor about a two decades ago. A strange teenage dream led him to believe he would find riches at sea. He returned with his head in its place and a bad case of scurvy that cost him a frontal tooth. He replaced the missing piece with a silver tooth, thus his alias. Dan returned to Frankfurt to a disappointed father who made him work extra hours at the tavern. His father passed away a few years later and Dan is the sole owner of the tavern. He brews his own ale in the basement of the tavern. The well-known Frankfurt Ale is very strong and has a taste of cinnamon and some flowers, the exact recipe is a secret.

Gob is an old half-orc who owns more than half of the transportation barges that cross the river everyday carrying all kinds of people and goods. He is particularly empowered because he owns the two largest barges. Gob is not particularly wealthy, except for the barges. The barges generate a very small income although he is certainly in a better position than other barge owners. He is rich among the poor.

These are the general features of Frankfurt City. The city is located in a warm temperate region. Winters are not harsh but summers are very hot.

Terrain. The geographical region is warm and humid. The acres that surround Frankfurt city consist mainly of grassy hills and patches of forested areas. Roads are well paved and easy to transit.

Light. There are no great buildings, geographical features, or tightly packed buildings that obstruct visibility very much. Illumination depends almost entirely on the hour of the day.

Smells and Sounds. In the region outside of the city, the smell of grass and flower blossoms is prevalent. Inside Frankfurt City, unfortunately, the bad smell of people and civilization prevails. Most people do not perceive it anymore, but a freshly arrived traveler will surely notice it. The city lacks a proper sewage system; most waste is dumped on Darma River.