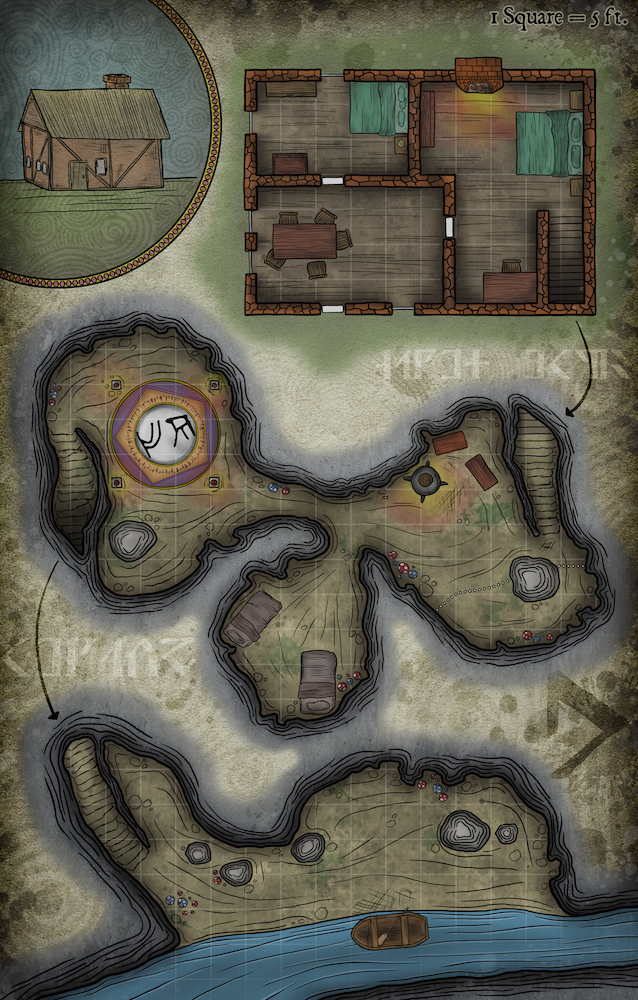 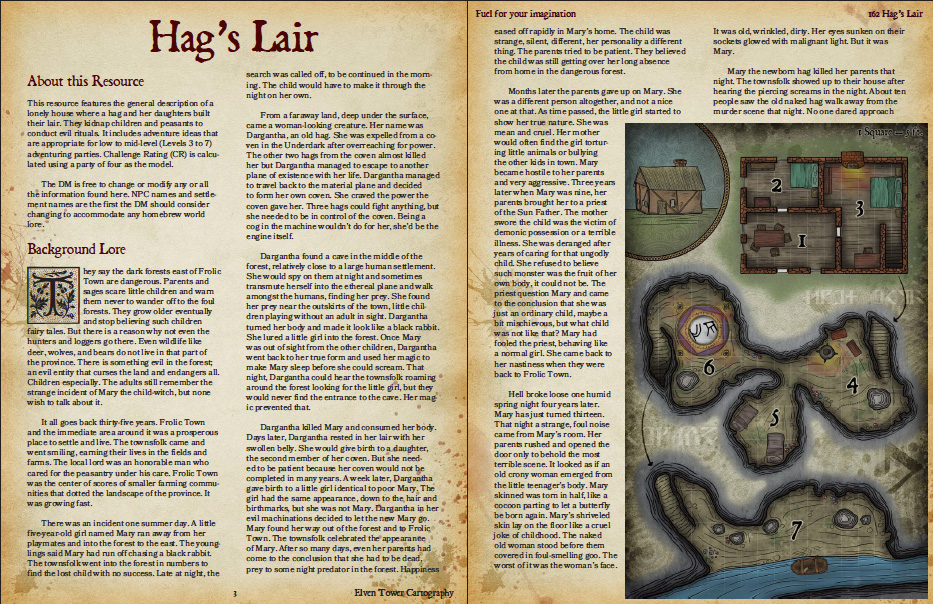 This resource features the general description of a lonely house where a hag and her daughters built their lair. They kidnap children and peasants to conduct evil rituals. It includes adventure ideas that are appropriate for low to mid-level (Levels 3 to 7) adventuring parties. Challenge Rating (CR) is calculated using a party of four as the model.

They say the dark forests east of Frolic Town are dangerous. Parents and sages scare little children and warn them never to wander off to the foul forests. They grow older eventually and stop believing such children fairy tales. But there is a reason why not even the hunters and loggers go there. Even wildlife like deer, wolves, and bears do not live in that part of the province. There is something evil in the forest; an evil entity that curses the land and endangers all. Children especially. The adults still remember the strange incident of Mary the child-witch, but none wish to talk about it.

It all goes back thirty-five years. Frolic Town and the immediate area around it was a prosperous place to settle and live. The townsfolk came and went smiling, earning their lives in the fields and farms. The local lord was an honorable man who cared for the peasantry under his care. Frolic Town was the center of scores of smaller farming communities that dotted the landscape of the province. It was growing fast.

There was an incident one summer day. A little five-year-old girl named Mary ran away from her playmates and into the forest to the east. The younglings said Mary had run off chasing a black rabbit. The townsfolk went into the forest in numbers to find the lost child with no success. Late at night, the search was called off, to be continued in the morning. The child would have to make it through the night on her own.

From a faraway land, deep under the surface, came a woman-looking creature. Her name was Dargantha, an old hag. She was expelled from a coven in the Underdark after overreaching for power. The other two hags from the coven almost killed her but Dargantha managed to escape to another plane of existence with her life. Dargantha managed to travel back to the material plane and decided to form her own coven. She craved the power the coven gave her. Three hags could fight anything, but she needed to be in control of the coven. Being a cog in the machine wouldn’t do for her, she’d be the engine itself.

Dargantha found a cave in the middle of the forest, relatively close to a large human settlement. She would spy on them at night and sometimes transmute herself into the ethereal plane and walk amongst the humans, finding her prey. She found her prey near the outskirts of the town, little children playing without an adult in sight. Dargantha turned her body and made it look like a black rabbit. She lured a little girl into the forest. Once Mary was out of sight from the other children, Dargantha went back to her true form and used her magic to make Mary sleep before she could scream. That night, Dargantha could hear the townsfolk roaming around the forest looking for the little girl, but they would never find the entrance to the cave. Her magic prevented that.

Dargantha killed Mary and consumed her body. Days later, Dargantha rested in her lair with her swollen belly. She would give birth to a daughter, the second member of her coven. But she needed to be patient because her coven would not be completed in many years. A week later, Dargantha gave birth to a little girl identical to poor Mary. The girl had the same appearance, down to the hair and birthmarks, but she was not Mary. Dargantha in her evil machinations decided to let the new Mary go. Mary found her way out of the forest and to Frolic Town. The townsfolk celebrated the appearance of Mary. After so many days, even her parents had come to the conclusion that she had to be dead, prey to some night predator in the forest. Happiness eased off rapidly in Mary’s home. The child was strange, silent, different, her personality a different thing. The parents tried to be patient. They believed the child was still getting over her long absence from home in the dangerous forest.

Months later the parents gave up on Mary. She was a different person altogether, and not a nice one at that. As time passed, the little girl started to show her true nature. She was mean and cruel. Her mother would often find the girl torturing little animals or bullying the other kids in town. Mary became hostile to her parents and very aggressive. Three years later when Mary was nine, her parents brought her to a priest of the Sun Father. The mother swore the child was the victim of demonic possession or a terrible illness. She was deranged after years of caring for that ungodly child. She refused to believe such monster was the fruit of her own body, it could not be. The priest questioned Mary and came to the conclusion that she was just an ordinary child, maybe a bit mischievous, but what child was not like that? Mary had fooled the priest, behaving like a normal girl. She came back to her nastiness when they were back to Frolic Town.

Hell broke loose one humid spring night four years later. Mary has just turned thirteen. That night a strange, foul noise came from Mary’s room. Her parents rushed and opened the door only to behold the most terrible scene. It looked as if an old crony woman emerged from the little teenager’s body. Mary skinned was torn in half, like a cocoon parting to let a butterfly be born again. Mary’s shriveled skin lay on the floor like a cruel joke of childhood. The naked old woman stood before them covered in foul-smelling goo. The worst of it was the woman’s face. It was old, wrinkled, dirty. Her eyes sunken on their sockets glowed with malignant light. But it was Mary.

Mary the newborn hag killed her parents that night. The townsfolk showed up to their house after hearing the piercing screams in the night. About ten people saw the old naked hag walk away from the murder scene that night. No one dared approach Mary, not even the guards. Mary went back to the forest to finally meet her mother again. Dargantha built a small house in the middle of the forest right on top of her cave. She lived with a second daughter she conceived only a few weeks after Mary was born. Dargantha received Mary with a hug and brought her down to her cave. A magical circle with runes was ready for them to perform the coven treaty. Dargantha fulfilled her wish. A new coven formed from her own daughters, she was finally in control.

A little more than twenty years later, Frolic Town is now a somber place. Many have moved away from the evil forest. There are rumors of one or several old ladies roaming the forest at night. People guard their children because they disappear ever more often and the town guard cannot defend them. Over the years, a few adventurers and mercenaries have been sent to destroy whatever evil lies in the forest, none have come back. Frolic Town still waits for someone strong enough to rid them of evil.