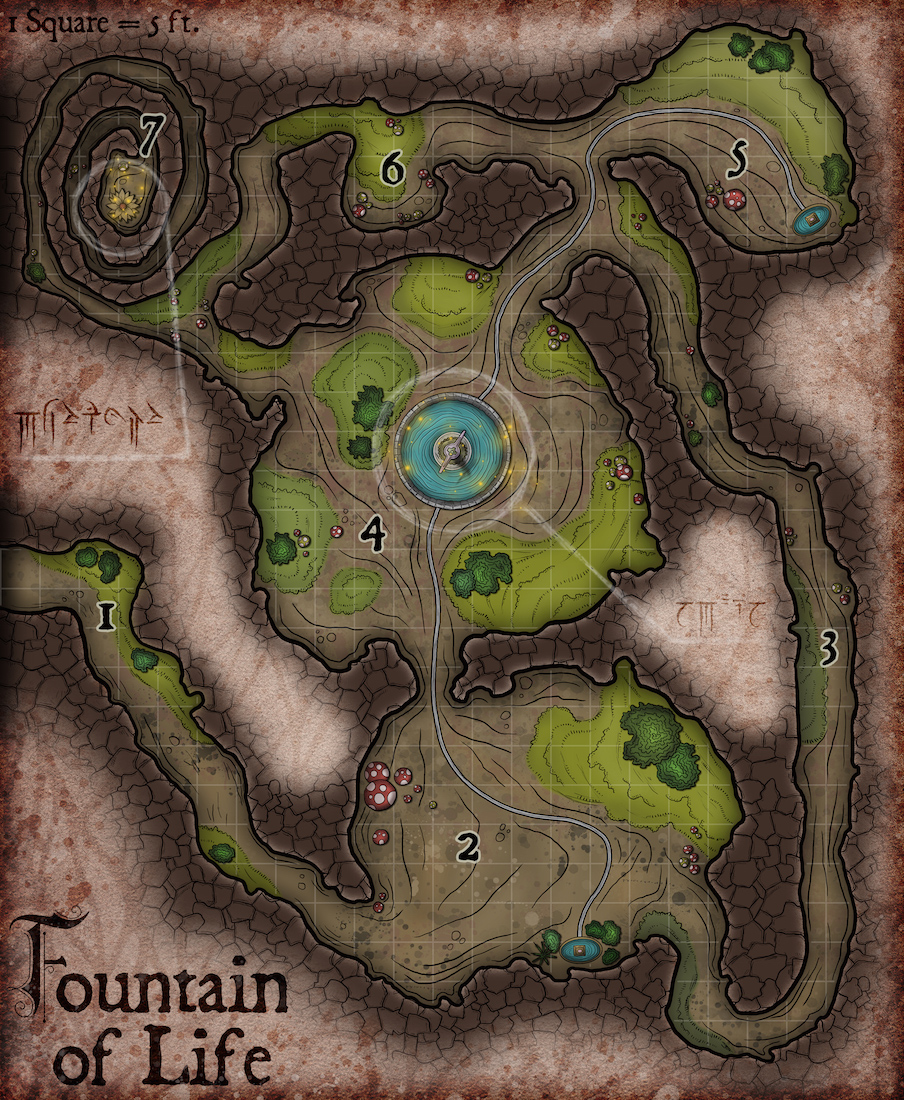 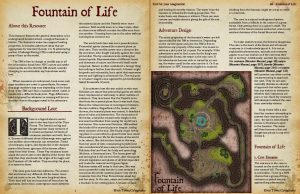 This resource features the general description of an underground location where a magical fountain is hidden. The fountain’s water has magical healing properties. It includes adventure ideas that are appropriate for low-level (Levels 1 to 5) adventuring parties. Challenge Rating (CR) is calculated using a party of four as the model.

There is a legend about a secret cave in the very heart of the Titan Forest. The forest is so big and dangerous that many sections of it remain uncharted. All kinds of creatures, sentient and wild, live in it. Scores of different elven tribes wage wars against one another since everyone can remember. Packs of minotaurs, satyrs, and dryads live in the deepest parts of the forest, ignorant of the human affairs away from their forest. These Fey creatures know about the secret cave in the depths of the forest. Not only that, they also know the origin of its magic and the Fountain of Life within. They worship the place; it is sacred to them.

The story goes back two millennia. The primordial world was very different. All the lesser races had not come to be yet. Not even long-lived elves. Their kind still had not branched off from their fey ancestors. At the time, convergence zones between the material plane and the Feywild were more common. Both worlds were in a closer state, often so close it was difficult to make the difference from one another. Crossing from one to the other without noticing was common too.

The world back then was not a peaceful place. Primordial spirits claimed the material plane as their own. Their terrible power was a threat to the fey ancestors, who fought valiantly against the cruel primordial. The fey ancestors were nothing but natural spirits. Representations of different facets and elements of nature and the world itself made corporeal. Nature is often considered a benign thing but nothing is farther from the truth. A flower might be gentle and vulnerable, but a spirit that represents storms and lighting is a fearsome foe. The real power of nature waged a war against the primordial that lasted thousands of years.

It is unknown how the war ended or who won. Scholars are aware that primordial spirits are either dead, imprisoned or wall away in other realities of existence. They also know that the Feywild is farther from the material plane than it was back then. Hence the reduced zones of convergence between the two realities. Regardless of the reason, after the war, the material plane was ruined. A desolated place of ruins and destruction. The incarnation of the forest, a fairy-like creature who fought in the war was heartbroken from seeing the world bare and barren. Her name was Dulcinea. She walked the lands of the material plane in despair, hating every moment of the war. She finally chose her dying place in a cave where a grand forest once stood. She would give her life for the forests of the world to be reborn. She did not fear death in this way, from her point of view, transmuting her life-force into a verdant world was a way to become immortal. Dulcinea died and from her body and quenching life-force, a forest was born. The forest grew tall and strong but it did not end there, after thousands of years vegetation and plants of all kind expanded and made the material world green again.

Dulcinea exists still today in that cave. She was once a powerful entity but she is now stretched out across the whole material plane. Only the fey creatures from the Titan Forest know about her and her story. In the cave, satyrs and centaurs built a fountain in her resting place. A beacon of hope and healing for worthy visitors. The water from the fountain is imbued with healing properties. The water heals any disease or ailment. There are even rumors and myths about it giving the gift of life and immortality.

The exact properties of the fountain’s water are left open-ended for the DM to determine. Depending on the current quest and plot, the DM is free to determine any property of the water. It is meant to serve as a plot point for a quest. For example: If the adventurers need to find a cure for the king’s son inexplicable illness, the water is the only cure. If the adventurers become sick or cursed by an enemy, the water could be the only cure for it. Or if an adventurer or NPC becomes crippled or maimed, drinking from the fountain might be a way to recover a lost limb.

The cave is a natural underground system accessible from a hillside in the center of a great forest. Only getting there is a quest in itself. The section of the forest remains uncharted, even to any sentient denizens of the forest like wood elves.

If any visitor kills a sentient fey creature attempting to prevent their entrance to the cave, the fact is immediately known to Dulcinea’s spirit in the fountain. The water will then become a fast and dangerous poison to any who drinks it.

The entrance to the cave is located on the north side of a tree-covered hill. The entrance is not hidden. There is a 50% chance that a group of three centaurs on patrol see any approaching adventurers. They question them harshly.

Plants and patches of greenery are in this chamber. The plants are the kind that needs sunlight to survive, but they grow in this dark place unimpeded, probably through the water’s properties. On the south wall, there is a small fountain. The water appears to come from a natural spring in the wall. The water goes north through a narrow channel next to the floor to Area 4. If the adventurers did not encounter the centaurs noted in Area 1, then the centaurs are here, drinking from the fountain near the south wall.

This long cave connects Area 2 to the back caverns, bypassing Area 4. The area appears to be empty but it is the home to thousands of small-sized spiders. The spiders swarm up and attack any creature that dares cross this tunnel.

This chamber has the more green areas and plants growing. The Fountain of Life dominates the center of the room. It is a circular pong, 15 feet in diameter. In the center a marble representation of Dulcinea. The water is clear, drinking it activates the magical properties the DM determined it has. Some of the green patches in this chamber are myconid plantations. There is a 70% chance that three myconid adults (Monster Manual, page 230) are in this chamber farming. The myconids avoid any physical confrontation but try to warn the adventurers that drinking from the water is not a good idea if they have harmed the forest in any way. In any case, the myconid adults release communications spores to alert any other centaur in the surface that there are visitors in the cave.

Another small fountain is in this room, it is identical to the one described in Area 2. The water appears to come from a spring too.

This is another garden like the ones found in Area 4. There are 1 myconid adult and 1 myconid sprout here (Monster Manual, page 230).

A spiraling tunnel of unnatural appearance ends up in a very small chamber. The chamber hosts a big yellow flower, similar in appearance to a sunflower but bigger in size and away from any light. The chamber is dimly illuminated by fireflies. The nectar from this flower has the same healing properties the water from the mountain has. The difference is that the flower can be relocated and it retains its healing properties. Unearthing this flower is a very delicate process. If it is done incorrectly, the flower could die in the process. To unearth the flower, a character must succeed a DC 16 Wisdom (Nature) check. Destroying or relocating this flower angers the fey creatures in the area.