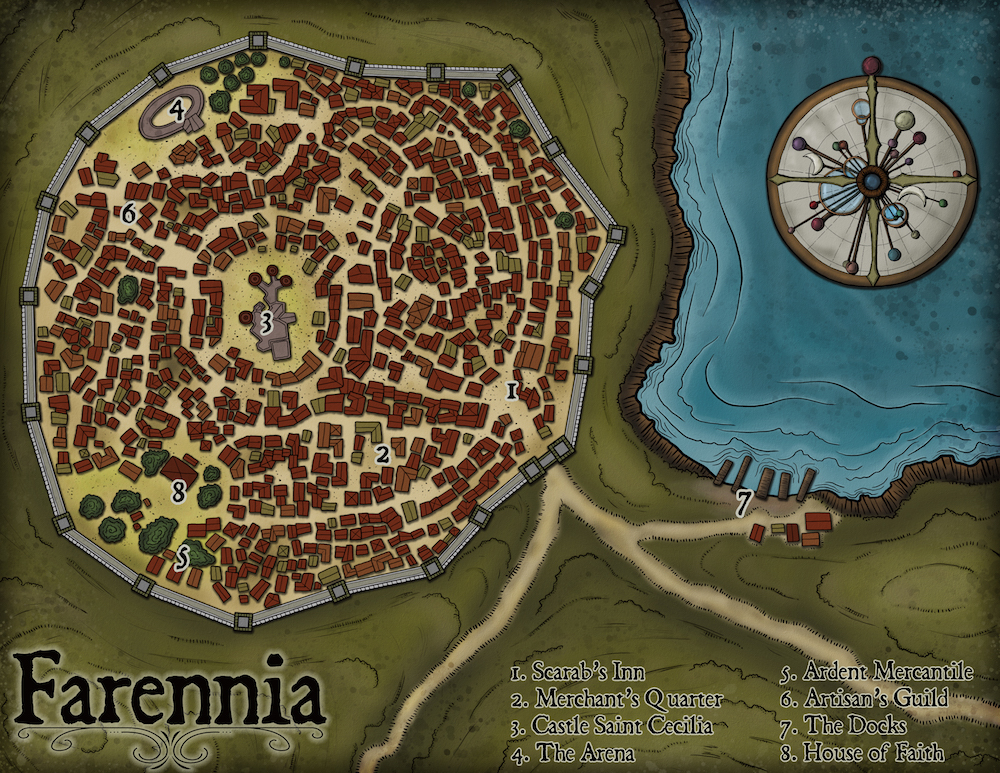 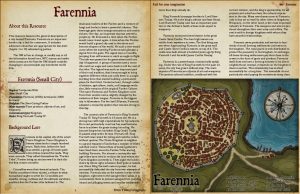 This resource features the general description of a city named Farennia. Farennia is an important border city, a hub for commerce. It includes adventure ideas that are appropriate for low-level (Levels 1 to 10) adventuring parties.

Farennia is the capital city of the small Faren Kingdom. Faren Kingdom’s history dates back a couple hundred years. Back then, before the land was settled, a group of hunter-gatherers tribes roamed the lands. They were nomads. They called themselves the “Farden Tribe”, Farden being an ancient word in their dialect that meant crocodile.

Crocodiles were their favored animals. The Farden considered them sacred, a tribute to what humankind ought to strive for. Crocodiles are stealthy, strong, ruthless and the ultimate survivors, qualities that the Farden tribe believed in. The shamanic leaders of the Farden used a mixture of fungi and herbs to brew a powerful infusion. This beverage gave them strange sensations and oneiric visions. One day, an important shaman uttered a prophecy. He forecasted a time when the Farden would never travel again. A time when the Farden would build a grand city next to the shore and become shapers of the world. He said a time would come when the traveling Farden would glimpse a signal from the gods. The signal was a crocodile, jumping from still waters to catch an eagle in flight. The tale was passed on for generations until one day it happened. A group of hunters saw a crocodile catch an eagle and came back to tell the rest of the tribe. The legend was such an important part of their oral tradition, that it was enough to bring together different tribes and unify them in a single working force that started building a permanent place for their kind. Centuries later, through cultural mixture, agriculture, trade, and language evolution, little remains of the original Farden Culture. The name Farennia and Farden Kingdom come from their ancient name, slightly changed by the evolution of their tongue. Farennia is the biggest city in kilometers. For the last150 years, Farennia adopted a monarchy system that remains strong to this day.

The current ruler of Farennia is King Varmeth Toulay IV. King Varmeth is 43 years old. He is a strong man with high expectations for his subjects. He is not particularly cruel but has used extreme force to achieve his goals during his ruling. He became king when his father King Gould Toulay II passed away when he was 19 years old. King Varmeth was raised for ruling and took the crown without qualms. The Faren Kingdom is neighbor to a grand expanse of lands that a number of tribes call their home. These tribes of hunter-gatherers have lived there since the Farden Tribe started building Farennia. For almost a century the savage tribes have tried to reclaim the land where the Faren kingdom currently is. They argue the land is theirs by divine right, whatever their gods or beliefs are. Since King Varmeth came to power, he has successfully defended the city from two attempts of invasion. Farennia sits on the eastern border of the kingdom, right next to the savage tribes’ lands. It is conveniently there to prevent savages from roaming inland and pillaging towns and smaller settlements more than they already do.

Farennia is a powerhouse, economically speaking. Under the rule of King Varmeth for the past 24 years, the city has grown without stop. The main exports of Farennia are objects of art and weaponry. The ancient cultural tradition, combined with the current mixture, and the king’s sponsorship for art projects and artist has risen the cultural expression in the city. Many merchants come to Farennia only to buy art to resell in other cities or kingdoms. Weaponry, on the other hand, is the most important industry in Farennia. The weapons and armors produced strengthen their own army and militia. The rest is sold to foreign kingdoms with whom they have peaceful relationships.

Farennia owes protection and service to hundreds of small farming settlements and towns in the kingdom. The royal guard is well distributed to protect the peasantry in the kingdom. In exchange, all these farming settlements pay their dues to the crown in the form of grain and produce. Farennia itself does not have a farming industry in its direct neighborhood, instead, it depends on the kingdom’s dues to survive. This relationship has worked successfully for a long time. The townsfolk do not particularly mind paying the sometimes steep dues because the royal guard is ever-present and successfully protect the peasantry from the savages in the neighboring lands.

Scarab’s Inn is a collection of different buildings that serve as a tavern and inn. The owner Ignace Tabbard bought all five buildings a long time ago and opened shop. The 5 houses are joined from the inside, providing a big space for common rooms, a tavern and kitchen and guest rooms. This is the biggest inn in town.

In between a couple of buildings and stores in the center of the Merchant’s Quarter scores of sellers and travelers sell their wares. The Merchant’s Quarter does not have a particular border or end. It is just a part of the city with more stores and a lot of street vendors. Anything can be found in this place with enough influence and gold. This is where foreign merchant lords come to buy weaponry and art.

The great Castle Saint Cecilia stands proudly in the center of the city. It is surrounded by an empty patch of land where the royal family is soon to build an inner wall. That wall is the source of jokes around the city because the past 6 kings since the castle was built had that plan but never even got around to begin the construction. The castle has 4 high towers that overlook the city. The king and his family host luxurious dinners once a week in the great Cecilia Hall. Diplomats, foreign dignitaries and other members of the court are often invited.

Entertainment for the masses. Glorious combat in the arena is the one pastime that joins the peasantry and the nobility. Fights and events in the arena are held every Sunday.

Ardent Mercantile is a merchant house that coordinates and oversees many of the most important trade deals in Farennia. The current owner Joseph Ardent inherited the position from his father only a year ago. Joseph lacks experience in the trade business, due to his inability to control the family business, Ardent Mercantile has lost two important trading deals with a neighboring country. Joseph needs help.

The artisan’s Guild is the most powerful entity in Farennia after the crown. It controls the all the different trades and holds the contracts of most workers and crafters. The guild also owns the deeds to most factories, smithies, and forges. They control the economy of Farennia. The current guild master is Rodanna Ariel. She is in good terms with King Varmeth, an important factor in the city’s success.

Five storage houses are the only buildings by the docks. Growth here is stunted for as long as the city’s wall is not extended to cover a section of the shore. Some merchants arrive by sea to trade in Farennia, other than that, only a few fishing boats use the docks.