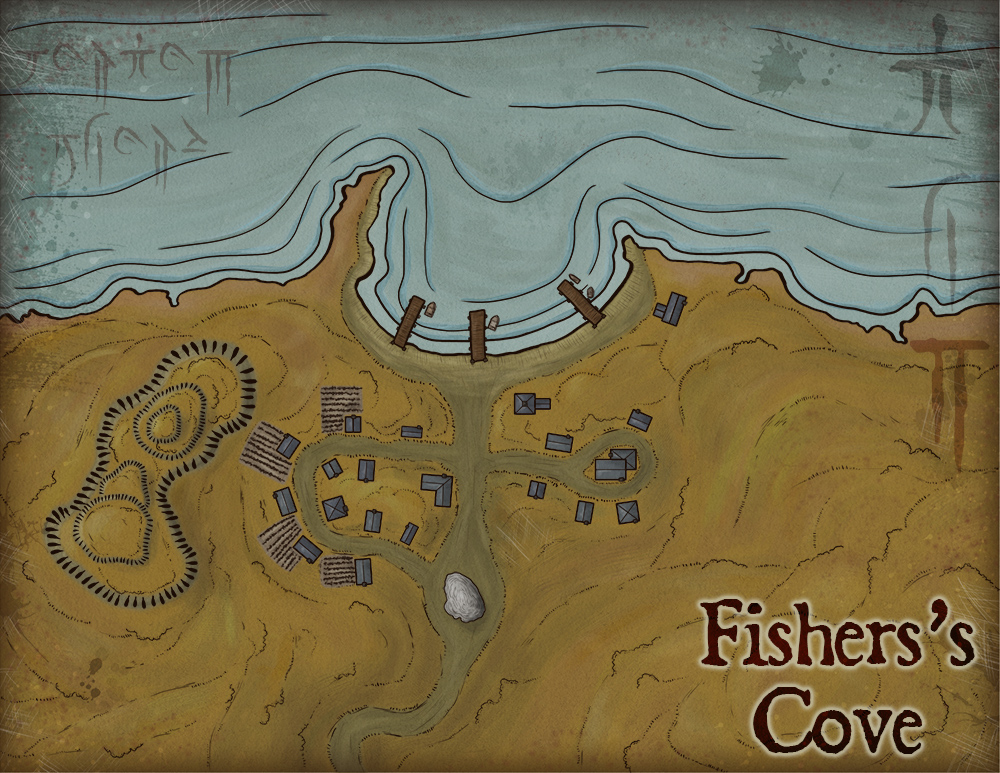 Fishers’ Cove is a small town/hamlet on the northern rocky shores. I was originally settled by several fishing families near a naturally occurring cove. The cold sea water are rich with different varieties of edible fish and shellfish. Over the last few years, other common folk families have moved to Fishers’ Cove to make a quite life. The place is geographically secluded from the county by hills and some mountains to the west and south. The people in town are kind but dull, life is calm and boring in this part of the world.

Once a month the small settlement is bound to pay a tithe to the local count. They always pay in fish and salt since there is not much developed farm land in Fishers’ Cove. Captain Guillaume comes once a month with some guards and carts to retrieve the tithe. In exchange, the settlement is under the protection of the county’s small force. Fulan Patrikov, the oldest man in town and one of the original settlers is not happy with the current arrangement. He is trying to find a way to cut ties with the county and establish their own independent state.

When Fishers’ Cove was 3 years old and some other families moved in, the Chapel of Saint Rudimer sent a priest to preach the words of their lord. The lack of religious competition and the natural seclusion of the town played important roles in establishing the religion among most of the settlers. Father Diaconus Ryf has been preaching in Fishers’ Cove for the last 10 years. He disagrees with the idea of being an independent state. The current ties to the county mean that more settlers will come over time, trusting they will still be part of a well protected region. This is important for the church; with time, Father Diaconus wishes to start the construction of a well supplied church and school for fishermen’s children.

Fulan Patrikov. The oldest person in Fishers’ Cove and leading member of the council. He is stubborn and old-fashioned. His main objective is to separate the settlement from the county by acquiring an important lordship. Additionally, he is overseeing preparations to build a manor house on top of the hill west of town.

Catherine Ducaff. She is a middle aged woman of striking beauty. Her home serves a double function; it is also a bar where other people go and buy her home made ale. It is a small and cozy place, the only place for drinking and talking. Catherine abandoned by a husband years ago. She cannot have children and bears that truth with bitterness.

Guzmo Fatrend. He is one of the only three guards in town. The job is unrewarding, boring and from time to time dangerous. He often climbs and sits on the big rock at the town’s entrance. Guzmo limps on his left leg from an arrow wound. He was shot while defending the small town from three robbers who decided to escape. For that feat he is considered a local hero.

Father Diaconus Ryf. Father Diaconus is the only priest in Fisher’s Cove. He represents the Chapel of Saint Rudimer. The church preaches an ideology centered around utmost respect for every living thing, while accepting our own place in the universe. Most townsfolk accept the beliefs of the chapel. Townsfolk gather every Friday at sunset for prayer at the chapel. Father Diaconus does not agree with Fulan Patrikov about leaving the protection of the county; he’d rather continue under the protection of the county.

Derendo Aurinne. Derendo is a wood elf merchant. He buys salt and fish oil at Fishers’ Cove to later sell back at the elven wood realms. He is in town four or five times a year and stays for a week or two. If strong sellswords are around he always offers some gold for the company, the roads are not always safe.

Young Frinn. He is a young lad who dreams about becoming a knight or mercenary. He trains with the town guards every other day. He can handle himself with the short sword and using a shield. If brave warriors are in town, he always offers his services as a squire. The only payment he asks in return is food and training. Only one man has accepted so far and only for a short period of time. Guzmo likes the boy and thinks he will be a good town guard in the future.

All this is available in PDF format in my Patreon account, sneak peak: 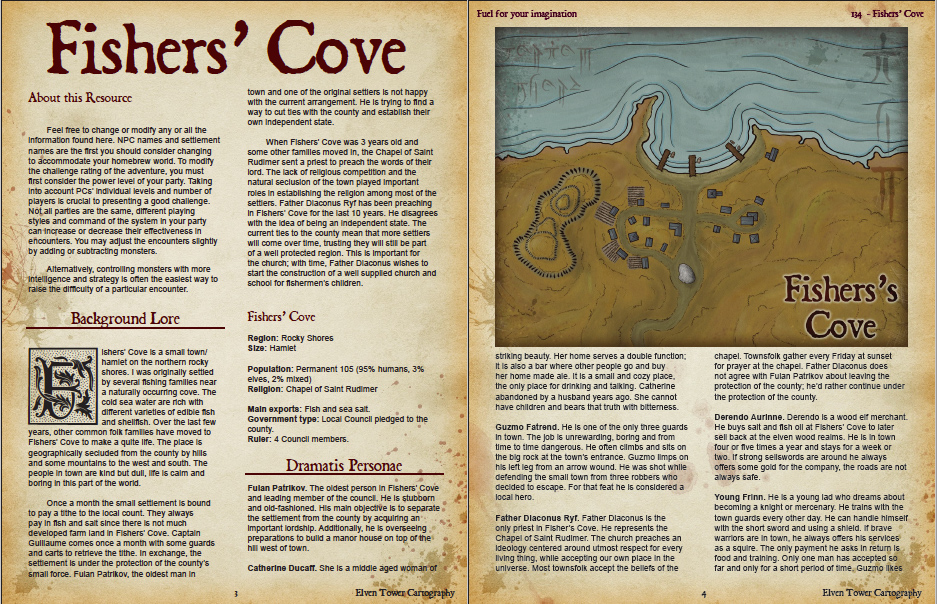