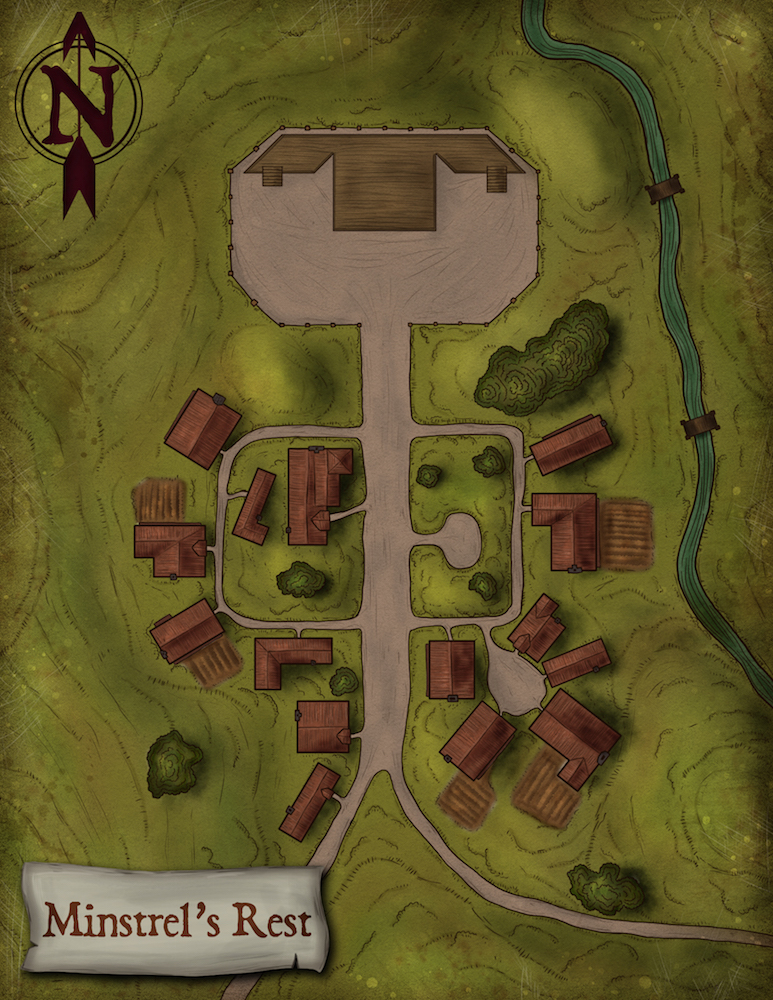 The small hamlet colloquially known as Minstrel’s Rest is located just a few miles from the great city. A little over a dozen houses flank a road that leads directly to a big wooden stage in the middle of a clearing. The place is big enough to hold a sizable audience. Itinerant carnivals, artists, bards and minstrels call this place home, even if just for a few days or weeks. Artists come and go as they travel the country in search for a few coins. The place is popular among them because there is always work in the Honey Pub or at the main stage.

It all started years ago in the big city. Baron Lucerme is a man of stature and good reputation. Born in a rich house, Baron Lucerne never lacked anything. He is a fat, middle aged man; with a thick long moustache covering part of his mouth; balding and often smiling. Baron Lucerme always wears finery and the best clothes gold can buy. He always enjoyed the past times of nobility: Playing board games, betting for racing horses or fighting champions, falconry, hunting; but above all Baron Lucerme’s favorite activity was always the arts. Watching actors perform plays at the theater, listening to musicians, from the lowliest minstrels to the more reputable chamber music. Baron Lucerme is well acquainted with the popular musicians and composers in town and often has them visit his state for private performances.

There was a problem, however. Even in the best theaters in the city, where low-borns are not allowed, a big crowd of nobles is something Baron Lucerme always despised. So many people cramped in the limited space of the theater became an ordeal. People stunk! And Baron Lucerme hated to smear the experience of the performing arts.

He came up with a creative solution. There was a small hamlet outside of town, people there were mostly workers in nearby farms. Baron Lucerme’s house had the rights to this land, it was no problem to give it a different purpose. He commissioned the construction of a grand wooden stage for artists. Baron Lucerme thought an open theater would solve the many problems he had in the city. Additionally many nobles would not bother going out of the city just for a theater evening. The Baron started hiring musicians and playwrights to perform their work in the wooden stage for him and a bundle of common folk.

It was a slow start. Some performers declined the opportunity to work there, preferring the big city which often promises a better pay. But with time, the small hamlet became popular. There is activity everyday in the pub, and several times a week in the big stage. Baron Lucerme visits Minstrel’s Rest usually twice a week to see the best plays. When he is in town, his local servants set up a front-row boot for him and his companions. The open theater in Minstrel’s Rest is not often visited by other nobles because they do not wish to be seen among the country folk. Baron Lucerme does not care for the company, he even enjoys the humble and honest ways of the poor; and he does not have to endure the noble’s stink anymore.

Baron Lucerme owns a house on the east side of town where he stays the night sometimes before riding his couch back to the city.

Townspeaker Pavlot is a nice country man, but he has a big problem with Baron Lucerme’s ideas. Before the whole open theater idea, the small town was a calm place and the people lived a peaceful life working in the fields. It is very different now because scores of artists pass through town, attracting crowds and thrashing the place. Townspeaker Pavlot would love for the open stage to be moved outside of the town’s confines or to a different settlement altogether. This is a very delicate affair because he was appointed as Townspeaker by Baron Lucerme himself, angering him might cost him his station.

One of the best playwrights is currently staying at a popular inn in the big city. Baron Lucerme has tried several times to hire him to perform with his group at Minstrel’s Rest but the playwright considers the place beneath his standards; even when the baron has offered to double their rate. Baron Lucerme is mad and looking for a group of brigands or sellswords to send them and “convince” the playwright to perform.

The Dark Stars, as they call themselves, is a group of bards and actors currently staying and the Honey Pub in the hamlet. Artists have preferential housing costs as long as they perform daily. But the Dark Stars have not performed once, saying that their main actor is currently sick, or inventing other not believable excuses. Old Pop John is the owner of the Honey Pub and he is sick of the Dark Stars; they are always drinking and bothering other paying customers. Old Pop John is ready to take stronger measures, he only needs a couple of strong men for the job.

If there’s a bard or performer in the party: Baron Lucerme just recently acquired music sheet for some foreign exotic music. It was costly, thus he is expecting something beautiful and strange for his investment. He has never heard the piece. There is a gold reward for any musician able to read and perform the music in the papers. A bard in the party is free to try to interpret the music in the sheets, or simply improvise and come up with something convincing enough for Baron Lucerme to believe it. Extra Idea: If the music is performed correctly an undesired effect is unleashed, it could be a spell-like phenomenon hidden in the music notes.