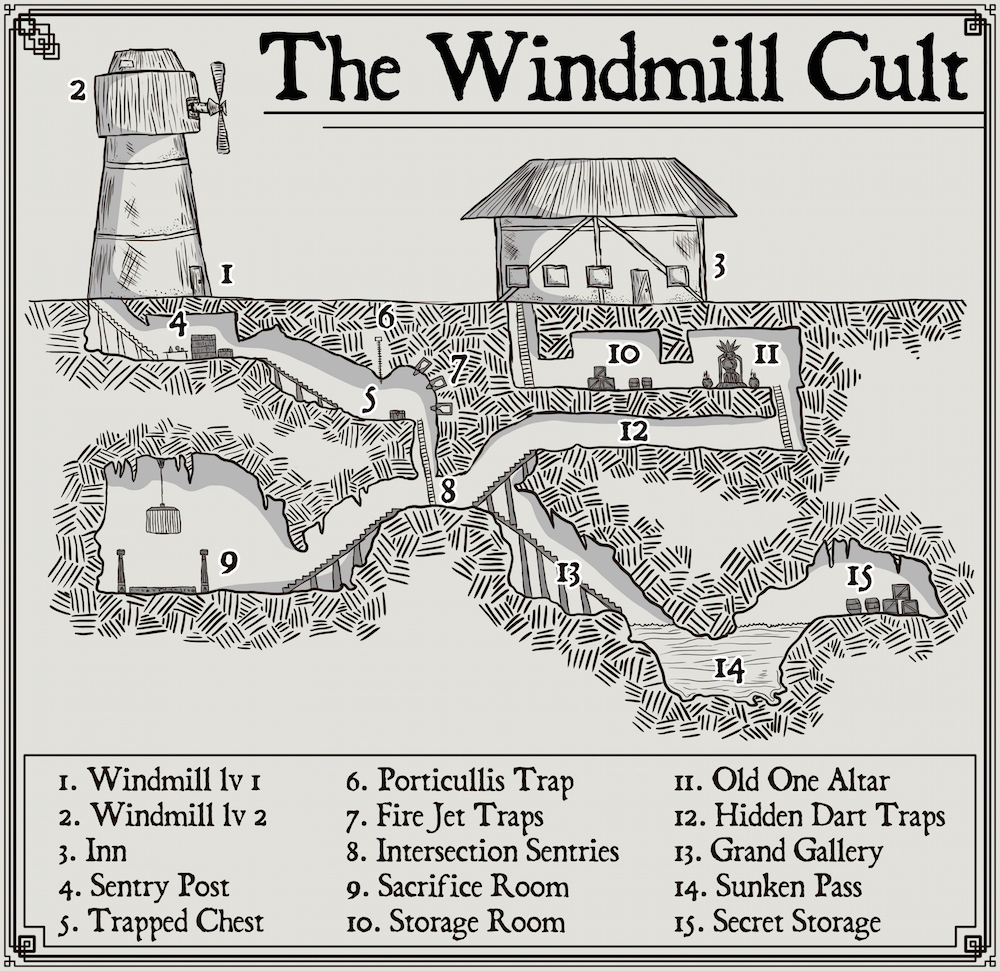 This short adventure is appropriate for low-level (levels 2-4) adventuring parties. Challenge rating is calculated using a party of four as the model.

The DM is free to change or modify any or all the information found here. NPC names and settlement names are the first the DM should consider changing to accommodate the homebrew world. To modify the challenge rating of the adventure, you must first consider the power level of your party. Taking into account PCs’ individual levels and number of players is crucial to presenting a good challenge. Not all parties are the same, different playing styles and command of the system in the party can increase or decrease their effectiveness in encounters. The DM may adjust the encounters slightly by adding or subtracting monsters.

Joseph Vangaltzi used to be a simple man. When he was just a teenager he took upon becoming a person of faith. Training in the monastery was a long ordeal, but someone had to do it; the old priest was frail and will soon pass away. What would become of the Church of Chauntea without a man to lead the townsfolk away from wrongdoing? That is what Joseph’s father used to say all the time, and the reason why Joseph enrolled in theology.

His career did start on the bumpy road, he was not a true believer. He was the type of person that takes responsibility for other people’s mistakes, just to avoid problematic situations. However, with time, study, and understanding of the Chauntean Church, Joseph felt a flower growing inside of him, a warm feeling of joy as the love for Chauntean values became an important pillar of his life. The old priest passed away and Joseph Vangaltzi became known as Father Vangaltzi, he was the shepherd of the common folk and did his best to lead them through the path of good.

Years passed and Father Vangaltzi became a staple in the community, respected by all in town. One night he had an strangely vivid dream: He found himself walking down a closed passageway. He walked until he found an intersection. The three paths before him looked identical to each other. He continued down the center path which turned left, and then right, and then left again with no apparent sense of direction, until he reached another intersection. Regardless of the path chosen, the passageways had no end; he felt lost and alone, the labyrinth was endless. This became Father Vangaltzi’s recurrent dream. It would assault him most nights hours before dawn. He tried prayers and remedies to stop the dreams to no avail. Worst of all, the nightmares were more vivid every day.

During the last oneiric experience, Father Vangaltzi reached the center of the labyrinth. The hallway opened to a large domed area. Thick pillars of stone supporting the ceiling, engraved with unreadable runes. A creature waited for him at the center of the chamber. I was taller than any man, its arms wide as barrels. Its body was covered in dark brown fur. It had hooves instead of feet and the head similar to a bull or goat. Its horns were long and pointy.

Father Vangaltzi felt compelled to approach the taurine figure. He tried to stop himself from walking but failed. He no longer had control of his body. It felt as if his whole body was numb. He was nothing but a prisoner behind his eyes, watching his body act on its own. The bull demon was tall, strong and awe-inspiring. It looked at Father Vangaltzi straight in the eye. Father Vangaltzi felt his soul burning; the demon tried to take complete control. Father Vangaltzi fought with all his will power but the game was rigged. This was the demon’s domain and Chauntea’s blessings and prayers had no power here. Father Vangaltzi lost it all that day.

The entity which attacked Father Vangaltzi in his dreams was the demon prince Baphomet. It targeted him because he was the sole priest preaching for a small town. The perfect choice to establish a growing cult. Father Vangaltzi remained acting as usual, preaching the ideals of Chauntea during the day, but starting a cult at night.

He declared that the Church of Chauntea required a bigger group of acolytes, trained to defend the common folk and enhance the moral standing of the town. He chose the trainees personally and trained them during the afternoon. When an acolyte was ready, he was presented to Baphomet’s altar to receive the true vision of the demon’s plans. Very few resisted the will of Baphomet; those who did were then sacrificed to his glory.

Thus a cult to Baphomet the Horned King was formed in a small town. With the growing number of disciples, Father Vangaltzi started the construction of an underground complex. It took them years to get to where they are now. There are two entrances to their lair. The main entrance is in the town’s windmill, very close to the Church of Chauntea. Hidden in plain sight, no one suspects this is the real source of cultist activity in the area. Chauntean acolytes are frequently near the mill doing church work or directly working the mill. A second entrance is hidden in the Inn’s cellar level. The innkeeper is a close ally to Father Vangaltzi.

Once adventurers reach the town, they will hear rumors and reports of cultist activity in the area. Strange disappearances and murder scenes are not uncommon as of recently. No one in town knows who the cultists are, but the townsfolk trust that Father Vangaltzi and his acolytes are there to help keep the peace.

The underground complex is protected by the cult Acolytes and Thugs hired as muscle. There are always 3-4 of them in the entrances to the underground. Area 5 in the map is a trapped area. The cultist know about it and have a way to bypass it every time they pass through here. If the chest is opened or someone steps on a pressure plate right next to the ladder going down, the portcullis falls, and traps them inside the complex. As this happens, three fire jet traps are activated. The fire jets affect every creature in the hallway after the portcullis. Any creature standing on the hallway must succeed on a DC 14 Dexterity saving throw for each fire jet. Each fire jets deal 13 (4d6) fire damage on a failed save, and half as much on a successful save. Additionally, any creature next to the edge may choose to jump down the shaft to Area 8 to avoid the fire jets. The shaft is 30 ft. high, creatures that fall take 10 (3d6) bludgeoning damage from it. Jumping is far from a good idea because there are acolyte sentries in Area 8.

Area 9 is a large chamber featuring a 20 ft. radius stone disk on the floor. The disk is engraved with runes and arcane symbols. This is where the cult celebrates night gatherings and sacrifices. There is a cage hanging from the ceiling right above the stone disk, about 20 ft. in the air. Sacrifices are put here for the ceremonies. Father Vangaltzi leads the ritual every time, channeling the energy of all his cultist to bring forth an Avatar of Baphomet, which appears in the center of the circle. The entity is tall enough to reach the cage where the prisoner is being held. The summoning always ends with the Avatar of Baphomet eating the victim alive.

Area 9 is where the boss fight is. Father Vangaltzi is a Level 5 cleric. He should be in company of many Acolytes and Thugs. The DM is free to increase the challenge by presenting an Avatar of Baphomet. The stats are not included in this resource, but the stat-block of a regular Minotaur is a good option for a low level party. For additional inspiration of Baphomet, the stats for the demon lord are featured in the Out of the Abyss Campaign (page 234).

This illustration and the adventure above are available in PDF format in my Patreon Page. 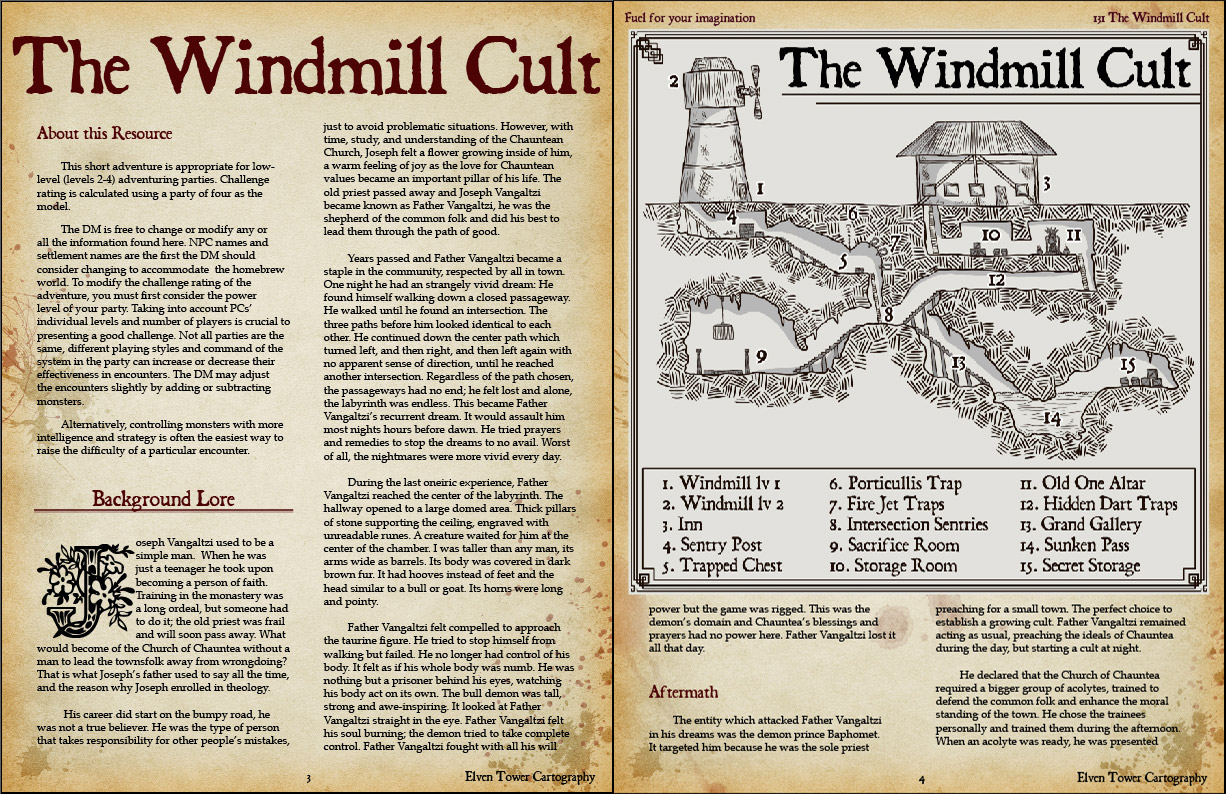