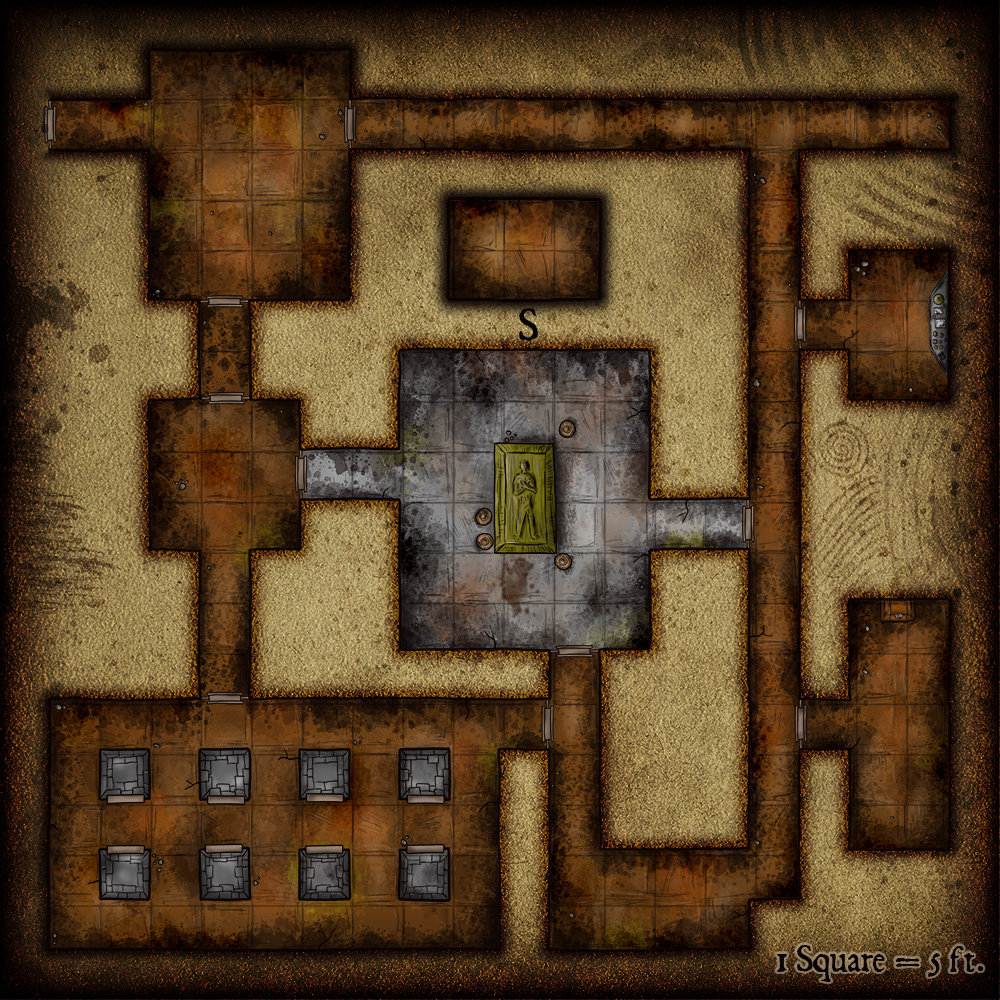 This gaming aid is aimed for low level adventuring parties. It’s about raiding an old crypt, a treasure map is hidden with Sir Haggards bodily remains. You can start this adventure by relaying a rumor to the party at their favorite tavern. Alternatively, a person of interest might hire the adventurers to find the treasure map and then go with them to the appointed location to claim the hidden treasure. The map presented here is the main crypt. Ideally, the main fight against Sir Haggard’s ghost occurs in the center room where the crypt is. The map can be in his sarcophagus, or in the secret room.

This short quest is directly linked to a treasure map quest where the real treasure is hidden. The treasure can be a big pile of gold and gems, or a bunch of bank notes redeemable at the bank. It could also be a goose hunt with nothing at the end, just to spite your players.

The Haggard family is not a proud house, not anymore. Very few old people still remember the times when the Haggards of Golden Hill were a reputable family. Everybody respected the name. In the big city of Golden Hill, their ancestors built up their name and station by exchanging valuables such as spices and silk. A few generations later and the Haggards had a monopoly on the trading scene of Golden Hill and the surrounding lands. Some items could only be sold through them, and they would take a cut every time. Yes, they were smart investors and ruthless negotiators, but everything was done according to the laws of trade, and those rules are crude.

The last real head of the family was Sir Johannes Haggard. He was a strong and stubborn man. A few years before his untimely death, he visited a far kingdom to strike a deal on some valuable goods to import. As a famous merchant he was given all liberties and accommodations. He saw how they did things there and came back to Golden Hills with revolutionary ideas.

He established a working relationship with the Copper Aligned Brotherhood, which is the most powerful bank in the country. He arranged a type of security for the ships’ captains at the docks. For a few gold coins and a signed contract, Sir Haggard would insure the value of the ship and its contents. This worked because he managed to convince or coerce almost every ship owner that visited Golden Hill. It was a good and profitable business. Money flowed in great quantities, and from time to time, a ship capsized or was lost and money had to flow out to cover the loss.

This was a long time ago, almost seventy years. What is known was recovered from old accounting books and ledgers. One day a group of captains appeared with claims of ships lost in a big storm. There were many ships and their decks held valuable goods. The amount to pay   greatly exceeded what Sir Haggard and the Copper Aligned Brotherhood were ready to pay. Sir Haggard was an honest man and wanted to cover the costs of the alleged lost ships, however the bank betrayed him and refused to pay, claiming his contracts and arrangements were nothing but frauds to rob the bank’s coffers. The Haggards lost their fortune to this, Sir Johannes Haggard grew bitter and died a few months later. Many still believe that the ship were never lost and it was all a ruse to get the Haggards out of the market. This was so long ago that only written record would confirm something like this.

There is a piece of the puzzle that never fit. The Haggards were really rich, they could have paid the captains and still be rich. It is said that Sir Haggard suspected he was being targeted by the captains or the bank itself and hid his fortune. An unpopular rumor says Sir Haggard’s ghost haunts the crypt under the abandoned Haggard State. Deep inside there is an old scroll with a map in it, the map leads to the hidden Haggard fortune, this map rests with Sir Haggard’s remains.

The rumors about the crypt are real, it’s haunted by Sir Haggard’s ghost. His soul was unable to rest after being the ruin for his family name. Over the years its spirit took form, he looks like a dark evil version of himself, not that anyone alive would remember him though. He is now bitter and hateful. After decades of loneliness he is now impossible to reason with. Even if destroyed, the ghost regenerates after a few days, the only way to appease it is to find the living heir of the banker who betrayed him and kill him. That would probably be a quest on itself and an unworthy mission for most adventuring parties.

Other undead roam the crypt. Sir Haggards bad energies infused them with the power to move by themselves, they are all mindless and obey the ghost of Sir Haggard. Good options for undead for a low level party are zombies, skeletons, ghouls, ghasts, shadows and spectres. The number of foes and distribution greatly depends on the number of characters and party level. Assuming a level 4 party, here are some monster groups for regular challenges.