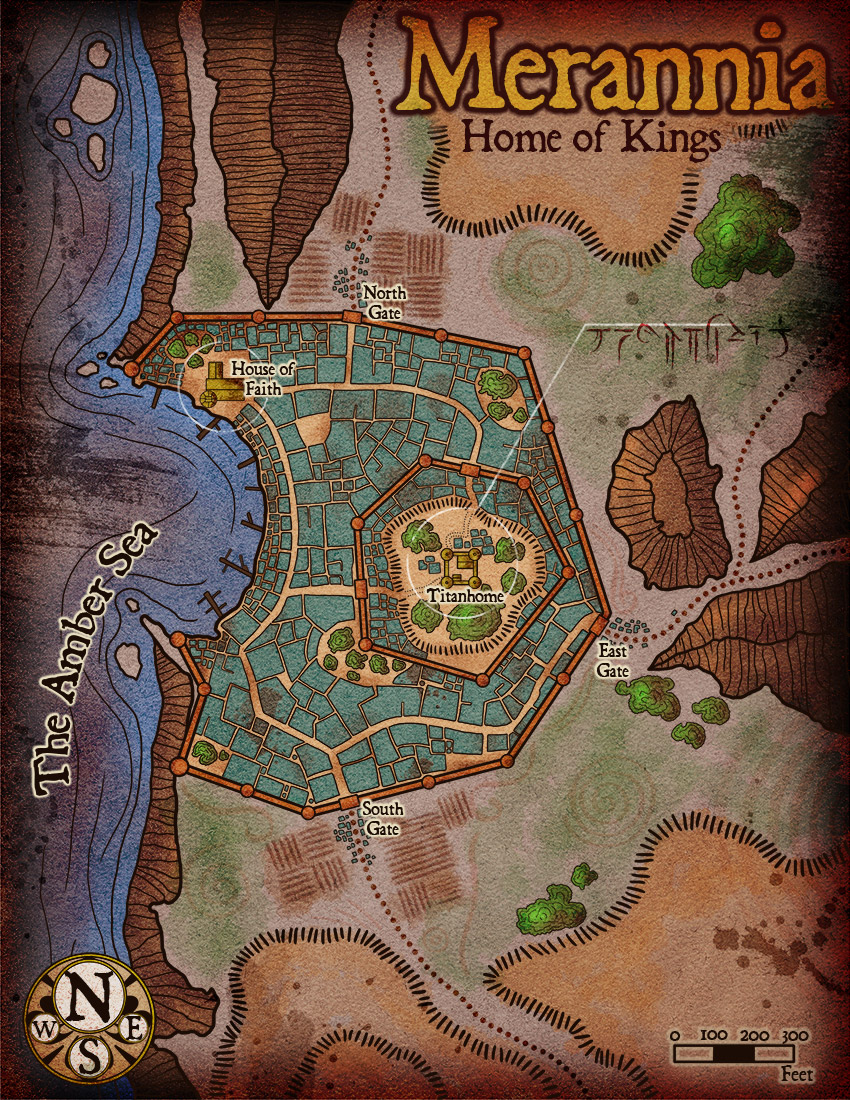 Merannia sits in on the Amber Sea’s coast since the beginning of written history. Legends speak of the ancient titan race placing the first stones of the castle that is now named Titanhome. This impregnable castle is built from stone blocks of enormous size. The castle’s ceilings are so high and the hallways so wide, that a giant could walk unimpeded as if it was its own home; hence the ancestral castle’s name.

For centuries the Throgaxe bloodline ruled over Merannia and adjoining lands. Merannia was home of the High King, and all subjects a thousand miles from it paid tribute. Over the centuries, scores of wars were waged against the crown’s enemies. Battle were lost and won but Merannia was never taken and the kingdom prevailed. Historians would never guess that the real enemy of the crown would come from inside the kingdom itself.

The story of The Last King

King Agustin Throgaxe was the last member of the royal bloodline to ever hold the title of High King. He was loved by his subjects and respected by his colleagues and the nobility. The mind behind King Agustin’s demise was Lord Kerrig Harrow, he set forth the course of events that led to the overthrow of the royal family.

A rebel group bred turmoil in the towns and villages in the kingdom, they came to be known as the Water Crows. They strived to instate a council chamber to take some power away from the royal family. They argued that townsfolk representation in the form of government was needed in order to improve the kingdom. A battle happened in the village of Raventown, a mob of rebels and soldiers killed the village guards and took over the village, naming it their headquarters. King Agustin Throgaxe was outraged, he sent the royal army in force to liberate the town from the traitorous rebels. The village was under siege for a week before the soldiers stormed the walls and retook it, the mob of armed townsfolk was no match for trained soldiers.

The leader of the Water Crows was taken prisoner. He was Commander Dan Amber, a member of the royal army and friend of the king. Oddly enough, he had no recollection of the past week’s events. It was found that his mind had been tampered with by a magic user. The common folk demanded his head on a spike but King Agustin decided to pardon Commander Amber.

A year later the scenario was somewhat repeated, a different settlement declared itself in open rebellion to the crown. Only now it wasn’t only the Water Crows but the whole population of the small town that refused their allegiance to Titanhome. King Agustin Throgaxe marched himself with the royal army to deal with the rebels, the settlement was a week away from Merannia.

It was a bloody battle, the rebels behaved like mountain savages an fought fiercely. Thousands died. In the meanwhile, Lord Kerrig Harrow pulled favors and paid bribes to take over Merannia and the remaining nobles and military officers. His plan worked, the rebels were under an enchantment spell that made them fearless and uncontrollable. Soon it would be known that King Agustin had marched on innocent people and the massacre that ensued after.

Days later the informants and couriers arrived with news of the bloodbath on King Agustin’s hands. The nobles turned to Lord Kerrig Harrow’s side and demanded a trial for the king. Commander Dan Amber was sent with a detachment to arrest the king and bring him to the capital.

On arrival, Commander Amber found out that the King’s army had turned on him and held him captive, after finding out they were ordered to butcher charmed townsfolk. The king was aware he had been tricked. His situation was complicated by the fact that the rest of the nobility and military turned to his enemies’ side. Commander Dan Amber escorted the king back to Merannia as a prisoner. He was still in debt with him for pardoning his life a year before when he himself had been charmed into rebellion. He risked being taken for a traitor again and decided to help the king. Days before, he had the queen and the two princes smuggled away from the capital.

They met midway. King Agustin was happy to see his wife and children safe and thanked Commander Dan for his faithful service. Commander Dan Amber then gave King Agustin control of the one hundred soldiers that came with them. They were loyal men that would gladly escort the royal family to a neighbor allied kingdom. King Agustin Throgaxe was a man of honor. He had his family, who were all innocent, escorted to the foreign kingdom for safety. He then commanded the rest of his soldiers to arrest him again and escorting to Merannia to face trial.

A week later he had a trial. The judge, jury and witnesses had all been bought or charmed against him. He stood no chance and was sentenced to die. Three days later he was escorted to the House of Faith to be beheaded in public. When the priest administered the last rites as was commanded for a man of his position,   Agustin said: “Meraneers! In the very act of my death, I recommend to you the love to the Titan Father, and the observance to our religion, for it shall lead you to glory. I die having come here to help you, and I die merrily, for I die amongst you. I die with honor, not as a traitor; I do not leave this stain on my children and my legacy. I am not a traitor, no.”

Though he was received as a traitor, after those words, the townsfolk’s opinion of him changed. They saw he was their rightful king and a fair man. But it was too late to stop the executioner. King Agustin’s death was met with indignation by the Meraneers in general. The sentiment of those horrified by the execution was compiled by trovadour Godanne Miro in “The fall of Merannia”: “Done is the dark crime, for which we will doubtlessly be called Parricides”

With the Meranneer princes missing, the nobility created a council with Lord Kerrig Harrow as the central piece. A few years have passed and the kingdom faces low stability and ever growing dissension in all levels. A sliver group of new rebels seek to overthrow the new council and reinstate the Throgaxe bloodline in power. This is specially important since the oldest of King Agustin’s sons is about to come of age.