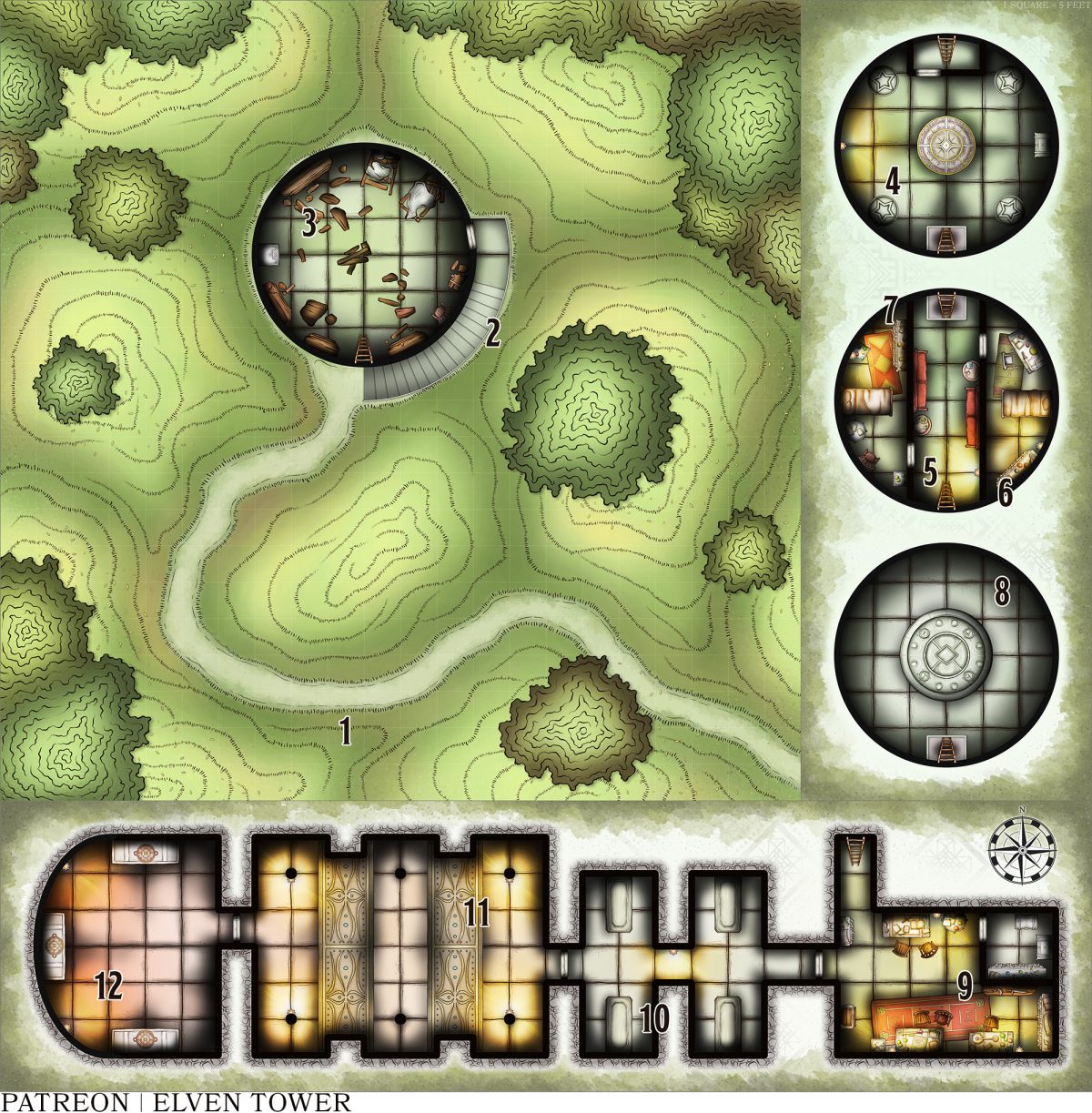 The screams and the wails from the Tower of Tears are unnerving. Never approach that place!

Farmers and hunters in the region lead simple, hard-working lives and are content with their lot. They take refuge in their honest work and leave the more complex matters to the nobles and those valiant enough to fight. But something is always on the back of their minds. Something that bothers them and shall not allow them to ever relax completely. It is the cursed tower half a mile north, in the Cerulean Forest. It has been there for more than two hundred years but no one has explored past the first chamber and lived to tell the tale.

The four-story, stone tower with a carved arch in its only entrance. The arch is sculpted as if it were the mouth of a devilish creature. That alone is enough to scare away most commonfolk but the worst thing about the tower is the sounds that come from its abandoned halls and the basement. Loud, painful, and piercing screams and wails come from the tower. They intensify during the night and can be heard in the settlements close to the Cerulean Forest. People in the area call it the Tower of Tears because of the unnerving wails of the sorrowful souls that are said to inhabit the place. The locals theorize that penitent souls and the spirits of heretics live in the tower and maintain a state of eternal torment. It serves well enough to keep children and most would-be adventurers from approaching the place.

Brave individuals have visited the Tower of Tears a few times. They have only explored the tower’s entrance hall, which is in shambles. Surviving explorers claim that dark shadows emerge from the floor cracks and attack trespassers. None who stayed after the undead emerged from below ever returned to tell the tale.

The tower was once the lair of a necromancer who perished hundreds of years ago. He left three arcane, soul repositories in the tower’s dungeon. The soul urns were arcane batteries but they have decayed over time, allowing spirits to emerge from them and haunt the tower. The hateful spirits are in unending suffering; their thirst for killing cannot be quenched. Fortunately, the undead cannot leave the tower. They can only wail in pain.

This introductory adventure begins when the characters arrive at one of the small settlements next to the Cerulean Forest’s tree-line. The characters hear the rumors about the tower and the otherworldly sounds that come from it. Vernon, a local who disbelieves the stories hires the characters to explore the tower and find the source of the wails for 400 gold pieces.

Features of the Tower

The following features correspond to the Tower of Tears map; areas 1 through 12.

Doors. Any door has a 2-in-6 chance of being held shut by a rebellious spirit. Such a door can be forced open with a DC 16 Athletics check or by rebuking the unholy spirit with divine power. This effect resets at dawn.

Light. Sconces on the walls feature a continual flame spell that has weakened over the centuries and provides dim light. Removing any sconce dispels the effect.

Smells and Sounds. The smell of decaying matter permeates the tower. The wails and screams of the souls in suffering resonate in the tower and dungeon every few minutes. The spirits’ wails come in several languages.

A four-story, stone tower pierces the skyline in the forest clearing. The tower is in severe disrepair.

A narrow forest trail leads to the cursed tower. The wails and screams that come from it give the place a dark aura and cause people to become alert and uneasy. The window-less tower only has one entrance in area 2 but the characters may opt to climb to the roof. A flock of black ravens flies past the roof regularly as if hunting.

The gate is sculpted in the form of a devilish entity with its mouth wide open. The devil’s eyes appear to move to follow those who approach it.

The gate is designed to scare away unwanted visitors even though it poses no threat. Survivors from past failed expeditions can confirm that the door features no traps. When the door is opened, multiple wails come from the entrance hall as the spirits below prepare to surface.

The tower’s chamber is dilapidated. The ruined furniture is in shambles and litters the hall’s entirety. A metallic hand ladder leads upstairs.

There is nothing of value in this chamber. The bodily remains of past explorers litter the chamber. An iron trapdoor by the west wall leads to the dungeon in area 9.

Spirits in Sorrow. Three shadows emerge from beneath and attack the characters in a fit of screaming rage.

Four intricate, armored knights surround a rune-carved stone dais in the middle of the chamber.

The necromancer created these magical guardians to protect his home. Two of them malfunctioned decades ago and shall not activate. The rune circle in the center empowers the magic that moves the guardians. A spellcaster can recognize the spell in the runes and understand they could use a tool to scratch the runes to ruin the spell and disable the knights (DC 15 Arcana). It takes 20 seconds to damage the runes enough.

Armored Knights. Interacting with the circle triggers two knights (animated armors) to attack trespassers. The other two malfunction and collapse.

The hall contains two couches and two side tables. The furniture has endured the passage of time quite well. The door to area 7 features intricate silver inlays. It is designed to attract would-be robbers to the poison trap.

The bedroom appears impervious to the passage of time. A faint purple glow comes from the bookcase.

The glow comes from the necromancer’s journal which features an arcane lock spell. The journal reveals how the necromancer, Sir Vanner Dirko, killed hundreds of people and how little he cared for the lives of others. He saw people as arcane batteries. His lifelong quest was to create the ancient receptacle to contain souls for later use. The soul urns are imperfect prototypes.

Treasure. The desk’s drawers contain a leather pouch with 115 gp, 200 sp, and a spell scroll of animate dead.

The room is designed to be appealing to trespassers. There are fake silver and gold trinkets on the shelves and the bookcase. There are schematics on the side table too. Ultimately, nothing has real value and the documents contain strings of incoherent data.

Poison Darts Trap. Interacting with any of the trinkets magically triggers dozens of poison darts to fly from the walls. Creatures take 1d6 poison damage (DC 14 Constitution save). This magical trap resets at dawn.

The tower’s roof contains nothing but a one-foot-tall, circular, stone platform etched with delicate symbols. It is a permanent teleportation circle that the necromancer would use to return swiftly to his tower. A spellcaster can copy the runes in the circle for later use.

Forest Ravens. A wild swarm of ravens bewitched by the wails from the tower attacks people on the roof.

Three work desks and several bookcases in the chamber are magically protected from exposure.

The necromancer’s private library contains the secret to his evil rituals and the process to recreate the soul urns.

Evil Research. A character that spends two hours reading the documents in the room learns that the necromancer killed hundreds of people. The bodies of all those were put in mass graves under the tower. Their souls were collected in three urns and used as a source of energy for foul rituals. The foul arcane ritual to extract a person’s soul and trap it in the urn is described too. The ritual is equivalent to a level 6 spell. A spellcaster may copy the information for later use.

Four stone sarcophagi rest in 10-foot-deep alcoves. The lids and the enclosures are unmarked.

Hundreds of soulless remains are contained under this chamber. Lifting any of the lids causes the undead to emerge after one round, one at a time (see below).

Unending Undead. Each sarcophagus leads to a 10-foot-deep shaft to a mass grave that contains at least one-hundred bodies. If open, a skeleton emerges from the shaft every minute until the lid is closed again.

Six pillars flank the empty chamber. All walls are carved with bas-reliefs of gentle spirits and souls.

A strange hum comes from beneath; it is caused by the arcane amplifier buried under the chamber’s center.

Three clay urns with gold and mithral inlays stand on stone tables. Whispers and wails come from their interiors. This is the source of the screams.

The proximity of living creatures to the soul runs causes the cracks in the clay to deepen and release three shadows and 2 specters. These creatures are mindless representations of their living selves. They fight until slain.

The characters reach the end of this adventure and face the consequences of their deeds. The final confrontation against the suffering spirits in area 12 is a trial that shall prove the characters in strength and will.

Defeating the spirits does not stop the suffering of the souls tortured within. Destroying the urns, however, causes a blinding explosion that releases hundreds of innocent souls. The spirits are finally at ease. They recover their humanity and embark on their journey to the afterlife. The wails from the Tower of Tears stop but it remains shunned. Nothing remains of the soul urns, they are destroyed in the arcane explosion.

A Triumph for Cynics 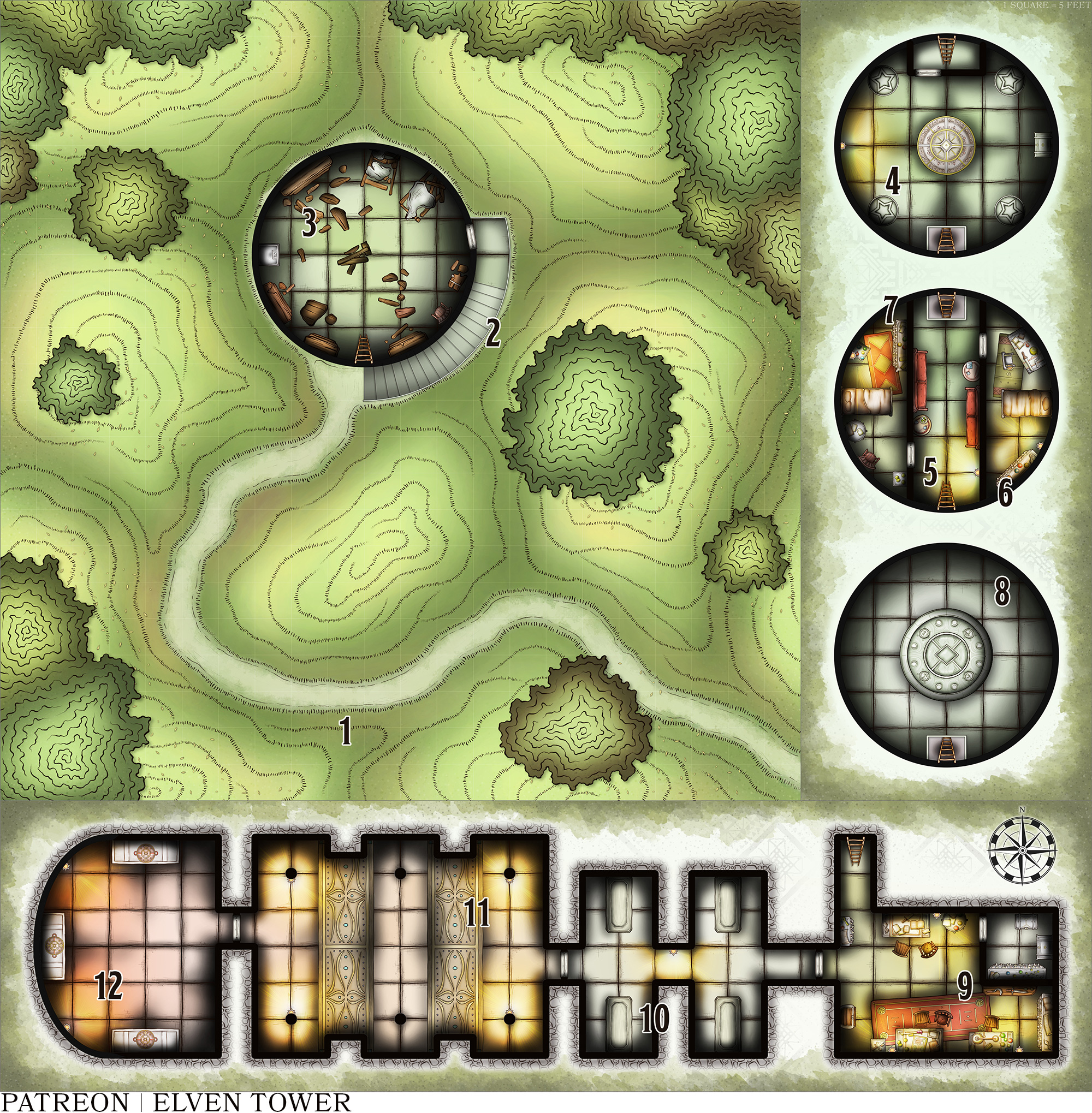