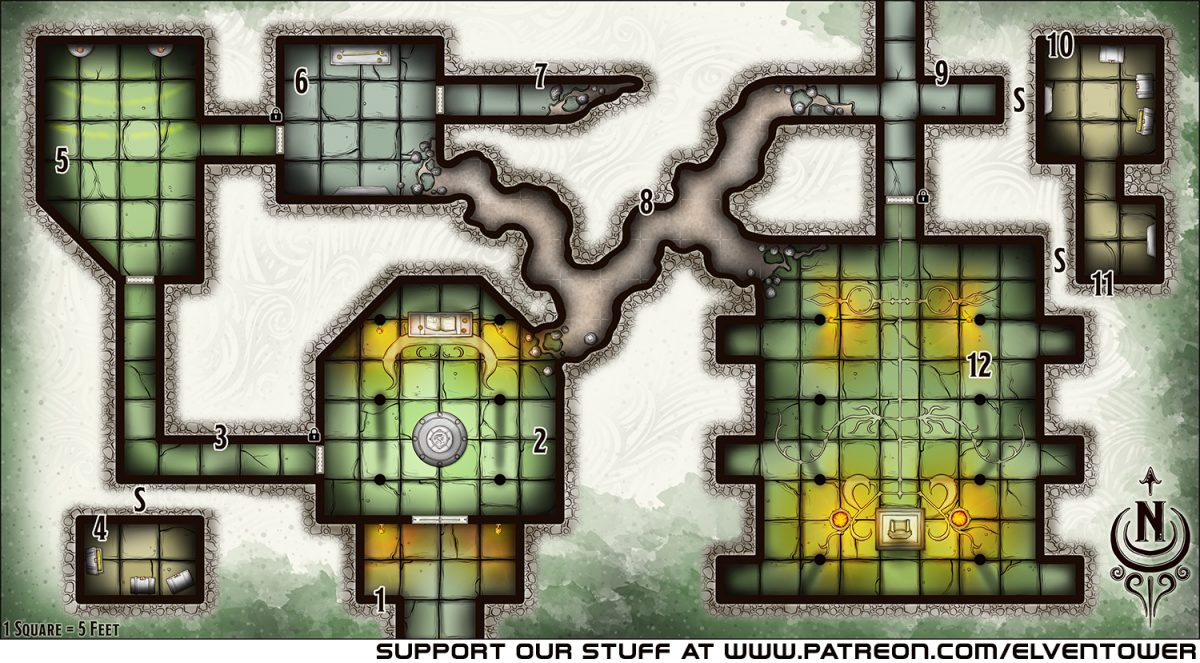 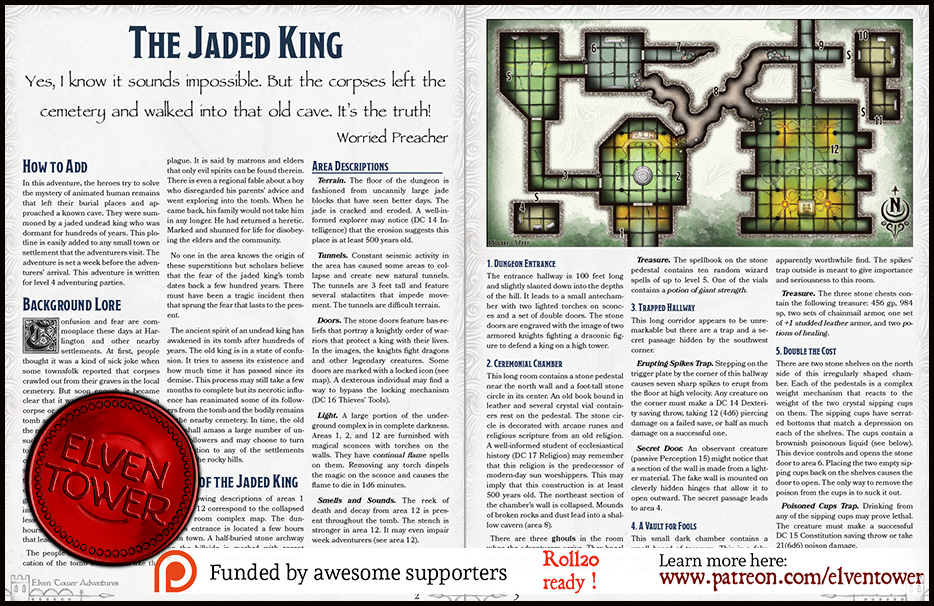 In this adventure, the heroes try to solve the mystery of animated human remains that left their burial places and approached a known cave. They were summoned by a jaded undead king who was dormant for hundreds of years. This plotline is easily added to any small town or settlement that the adventurers visit. The adventure is set a week before the adventurers’ arrival. This adventure is written for level 4 adventuring parties.

Confusion and fear are commonplace these days at Harlington and other nearby settlements. At first, people thought it was a kind of sick joke when some townsfolk reported that corpses crawled out from their graves in the local cemetery. But soon enough, it became clear that it was true. Every few days, a corpse or a skeleton emerged from their tomb and began a journey north, toward the rocky hills. Two men tried to stop one such skeleton on one occasion. The skeleton ignored them at first, contented with continuing its pilgrimage. But then the skeleton turned back and attacked one of the men. He was mauled to death. The other man went back to town to tell the grizzly tale. The undead appear to be uninterested in the town or its settlers unless bothered. They walk north for a few hours and then vanish under an archway that leads to a shunned tomb on the hills.

The people in the region know the location of the tomb but avoid it like the plague. It is said by matrons and elders that only evil spirits can be found therein. There is even a regional fable about a boy who disregarded his parents’ advice and went exploring into the tomb. When he came back, his family would not take him in any longer. He had returned a heretic. Marked and shunned for life for disobeying the elders and the community.

No one in the area knows the origin of these superstitions but scholars believe that the fear of the jaded king’s tomb dates back a few hundred years. There must have been a tragic incident then that sprung the fear that lasts to the present.

The ancient spirit of an undead king has awakened in its tomb after hundreds of years. The old king is in a state of confusion. It tries to assess its existence and how much time it has passed since its demise. This process may still take a few months to complete but its necrotic influence has reanimated some of its followers from the tomb and the bodily remains of the nearby cemetery. In time, the old king shall amass a large number of undead followers and may choose to turn its attention to any of the settlements close to the rocky hills.

Tomb of the Jaded King

The following descriptions of areas 1 through 12 correspond to the collapsed throne room complex map. The dungeon’s entrance is located a few hours from town. A half-buried stone archway on the hillside is marked with recent tracks and the tattered fabric remains of the escaped undead.

Terrain. The floor of the dungeon is fashioned from uncannily large jade blocks that have seen better days. The jade is cracked and eroded. A well-informed explorer may notice (DC 14 Intelligence) that the erosion suggests this place is at least 500 years old.

Tunnels. Constant seismic activity in the area has caused some areas to collapse and create new natural tunnels. The tunnels are 3 feet tall and feature several stalactites that impede movement. The tunnels are difficult terrain.

Doors. The stone doors feature bas-reliefs that portray a knightly order of warriors that protect a king with their lives. In the images, the knights fight dragons and other legendary creatures. Some doors are marked with a locked icon (see map). A dexterous individual may find a way to bypass the locking mechanism (DC 16 Thieves’ Tools).

Light. A large portion of the underground complex is in complete darkness. Areas 1, 2, and 12 are furnished with magical sconces with torches on the walls. They have continual flame spells on them. Removing any torch dispels the magic on the sconce and causes the flame to die in 1d6 minutes.

Smells and Sounds. The reek of death and decay from area 12 is present throughout the tomb. The stench is stronger in area 12. It may even impair week adventurers (see area 12).

The entrance hallway is 100 feet long and slightly slanted down into the depths of the hill. It leads to a small antechamber with two lighted torches on sconces and a set of double doors. The stone doors are engraved with the image of two armored knights fighting a draconic figure to defend a king on a high tower.

This long room contains a stone pedestal near the north wall and a foot-tall stone circle in its center. An old book bound in leather and several crystal vial containers rest on the pedestal. The stone circle is decorated with arcane runes and religious scripture from an old religion. A well-informed student of ecclesiastical history (DC 17 Religion) may remember that this religion is the predecessor of modern-day sun worshippers. This may imply that this construction is at least 500 years old. The northeast section of the chamber’s wall is collapsed. Mounds of broken rocks and dust lead into a shallow cavern (area 8).

There are three ghouls in the room when the adventurers arrive. They kneel and pray before the altar but interrupt their prayers to attack the adventurers.

Treasure. The spellbook on the stone pedestal contains ten random wizard spells of up to level 5. One of the vials contains a potion of giant strength.

This long corridor appears to be unremarkable but there are a trap and a secret passage hidden by the southwest corner.

Erupting Spikes Trap. Stepping on the trigger plate by the corner of this hallway causes seven sharp spikes to erupt from the floor at high velocity. Any creature on the corner must make a DC 14 Dexterity saving throw, taking 12 (4d6) piercing damage on a failed save, or half as much damage on a successful one.

Secret Door. An observant creature (passive Perception 15) might notice that a section of the wall is made from a lighter material. The fake wall is mounted on cleverly hidden hinges that allow it to open outward. The secret passage leads to area 4.

4. A Vault for Fools

This small dark chamber contains a small hoard of treasure. This is a fake vault meant to distract any would-be robbers and abandon the place after an apparently worthwhile find. The spikes’ trap outside is meant to give importance and seriousness to this room.

There are two stone shelves on the north side of this irregularly shaped chamber. Each of the pedestals is a complex weight mechanism that reacts to the weight of the two crystal sipping cups on them. The sipping cups have serrated bottoms that match a depression on each of the shelves. The cups contain a brownish poisonous liquid (see below). This device controls and opens the stone door to area 6. Placing the two empty sipping cups back on the shelves causes the door to open. The only way to remove the poison from the cups is to suck it out.

Poisoned Cups Trap. Drinking from any of the sipping cups may prove lethal. The creature must make a successful DC 15 Constitution saving throw or take 21(6d6) poison damage.

This chamber contains a stone table with several objects on it, three ghouls, and one ghast. The undead abominations attack as soon as intruders enter this room from any other area. The southeast corner of the room has collapsed. The resulting passage connects to the shallow tunnels of area 8.

Treasure. The gilded trident on the dais is magical. It is a +1 trident with a special property. When it is used to impale a creature, it produces the sound of a dolphin.

The 20-foot-long hallway ends abruptly as the ceiling caved in and closed off any chance at passage. This hallway originally reached area 9. A team of determined laborers may dig through the dirt and reopen the passage in 2d6 days with the appropriate tools.

8. A Time for Crawling

The cave-ins in the area created this shallow tunnel network that connects four different areas of this dungeon. The shallow tunnels are home to an enormous spider colony. There are three swarms of spiders in the tunnels. They attack any living creatures that attempt to pass through but do not follow their prey outside of the tunnel in any direction.

The south end of this intersection features a stone door with an engraved landscape. It depicts a knightly order of 14 warriors that decided to give their lives to protect the royal family from certain death at the hands of a demon. A detect magic spell reveals a strong aura of necromancy on the door (see below).

The north end of the hallway continues for 50 feet and connects to a different part of the ancient underground complex. That area north of the throne room is beyond the scope of this module and left to the DM’s discretion.

Soul Stealing Trap. Touching the stone surface of the throne room door causes a massive amount of necrotic energy to erupt from it and attempt to destroy the creature. The creature is subject to a finger of death spell (Con save DC 15). The door is safe to handle after the spell is cast but the trap resets after 24 hours.

Secret Door. An observant creature (passive Perception 15) might notice that the bottom wall of the east dead-end is made from a lighter material. The fake wall is mounted on cleverly hidden hinges that allow it to open outward. The secret passage leads to area 10.

The room contains three stone chests and a stone shelf. The treasure is not unprotected, however. Four shadows cling to the dark ceiling and drop on the unwanted visitors as soon as they go through the treasure.

The area can be used to bypass the magical door to area 12. There is a lever on the west wall that causes the secret door to open. This passage can only be opened from this side of the door.

A strange congregation of creatures gathers in the throne room when the adventurers arrive. The jaded king (mummy) sits on the throne with both arms in the air. Around it, the animated dead remains from the town’s cemetery sit as if in prayer. They are in different states of decomposition. There are four zombies (each with 15 HP) and seven skeletons (each with 4 HP). Two ghouls stand by the king’s side. They wear tattered clothing with the symbol of the knightly order depicted on the stone doors.

The jaded king orders its horde of undead to attack the intruders and fights until slain. Destroying the king causes the undead creatures to stop emerging from the cemetery. The remains from the cemetery can be handed safely after the undead have been destroyed.

The Stench. Any creature in the area must make a successful DC 14 Constitution saving throw to avoid becoming poisoned for 1d4 hours. On a success, the creature is immune to this effect for 24 hours. The dungeon is in silence; the undead creatures produce no sound.

Secret Door. An observant creature (passive Perception 15) might notice that a section of the northeast corner of the room is made from a lighter material. The fake wall is mounted on cleverly hidden hinges that open outward but there is no way to open this passage from area 12. The secret passage leads to area 11.

Treasure. There are eight jade stones embedded on the throne back. Each of the stones is engraved with a miniature landscape of exquisite craftsmanship. Prying them out without damaging them requires skill and precision (DC 16 Dexterity). Each successfully removed jade stone is worth 400 gp when sold to a collector of these kinds of trinkets. A failed attempt renders the stones worthless. 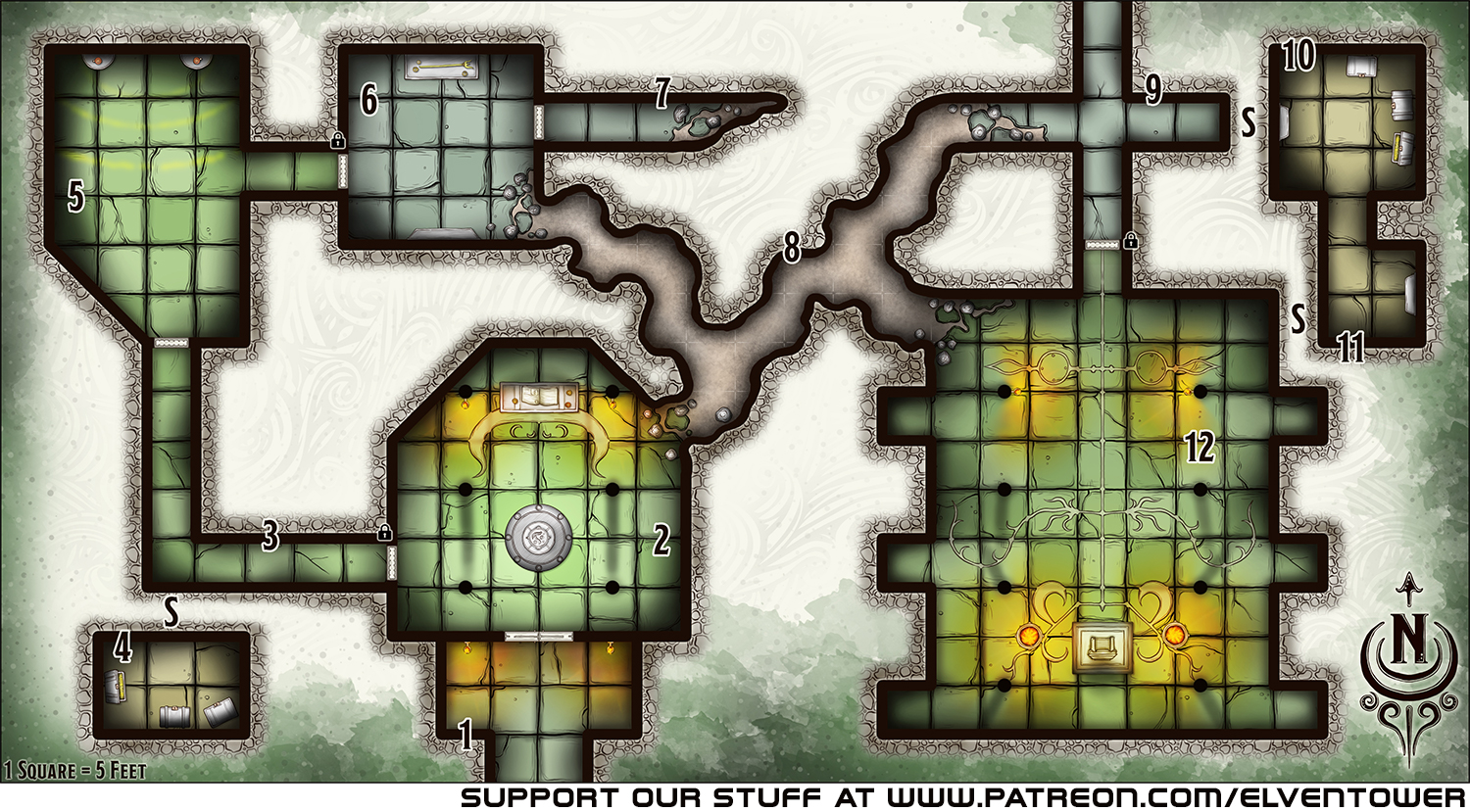