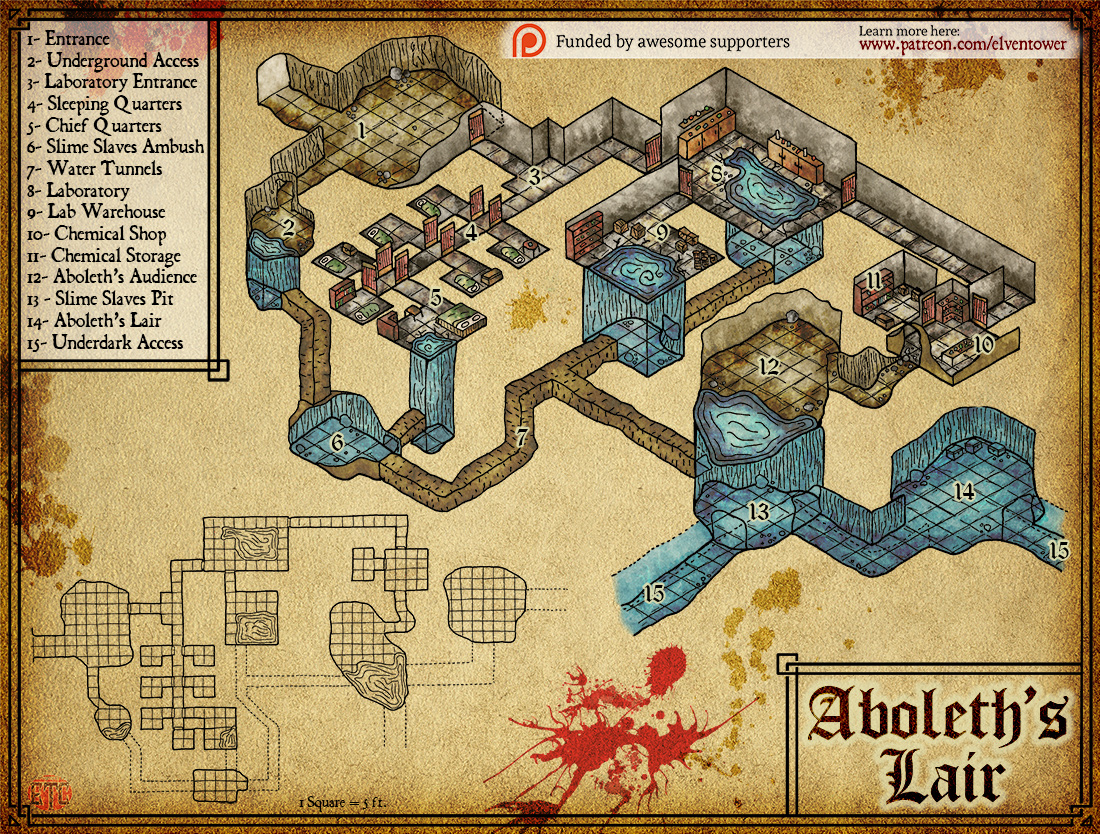 Aboleths are formidable foes. Humanoids, unaware of the lore behind the depth monsters mistake them for simple fish. Enormous but fish nonetheless. Only the very well read would know that aboleths are long-lived psychic masterminds whose plots and plans can span millennia, not because they can live that long, they can’t. It is because their superior brains contain all memories and past experiences of their parents , grandparents and all the way back to unknown ancestors. An aboleth can come up with a plot so long and ambitious that only its offspring would be able to carry it out. And they would, by sharing all memories and experiences from the parent.

Gurynthx is an aboleth that took over a gnome underground laboratory. With the help of his slime slaves and other thralls they created a series of tunnels and accesses underneath the laboratory. They took their time and were ever patient. When they attacked it was over in minutes, the gnome scientists and tinkerers were captured and enslaved. Their minds, experiments and secrets now a possession of Gurynthx. Gurynthx has been interested in this laboratory because of the nature of the experiments and projects they work with. These gnomes specialize in elemental binding and the crafting of alchemical substances. All these are gnome trade-secrets the aboleth and all his future offspring will find handy. This is what they call knowledge hunting.

Not very far in the main gnome underground city, it has already been noticed that the lab reports stopped and no staff member has returned home for days. A small detachment of the city guard was sent to inquire about it but they did not come back either. Suspecting a problem, the local commander has offered a gold reward for any interested in investigating the lab. He’ll rather risk mercenary lives than more members of the city guard, at least for now.

Aboleths, unlike most monsters are supposed to be masterminds, always two steps ahead of their pursuers. Let’s remember they were solo monsters in the previous edition. This is not a creature you encounter in a random fashion while exploring a cave. Most importantly, aboleths are way more intelligent than the average adventurer and will not fight to the death unless trapped. From their aberrant mindset, it’s a better course of action to escape and wait until the PCs die of old age, or even leave the task to its children, than to die outnumbered in a bloody battle.

An encounter like this one could very well end with Gurynthx escaping down the underdark accesses never to be heard of again. If a PC was transformed into a slime slave or enthralled during the encounter, said PC also leaves with the aboleth.

With this in mind, an aboleth adventure would set the party level at 7-10 depending on the number of thralls and followers. And that’s another thing, the aboleth is never alone.