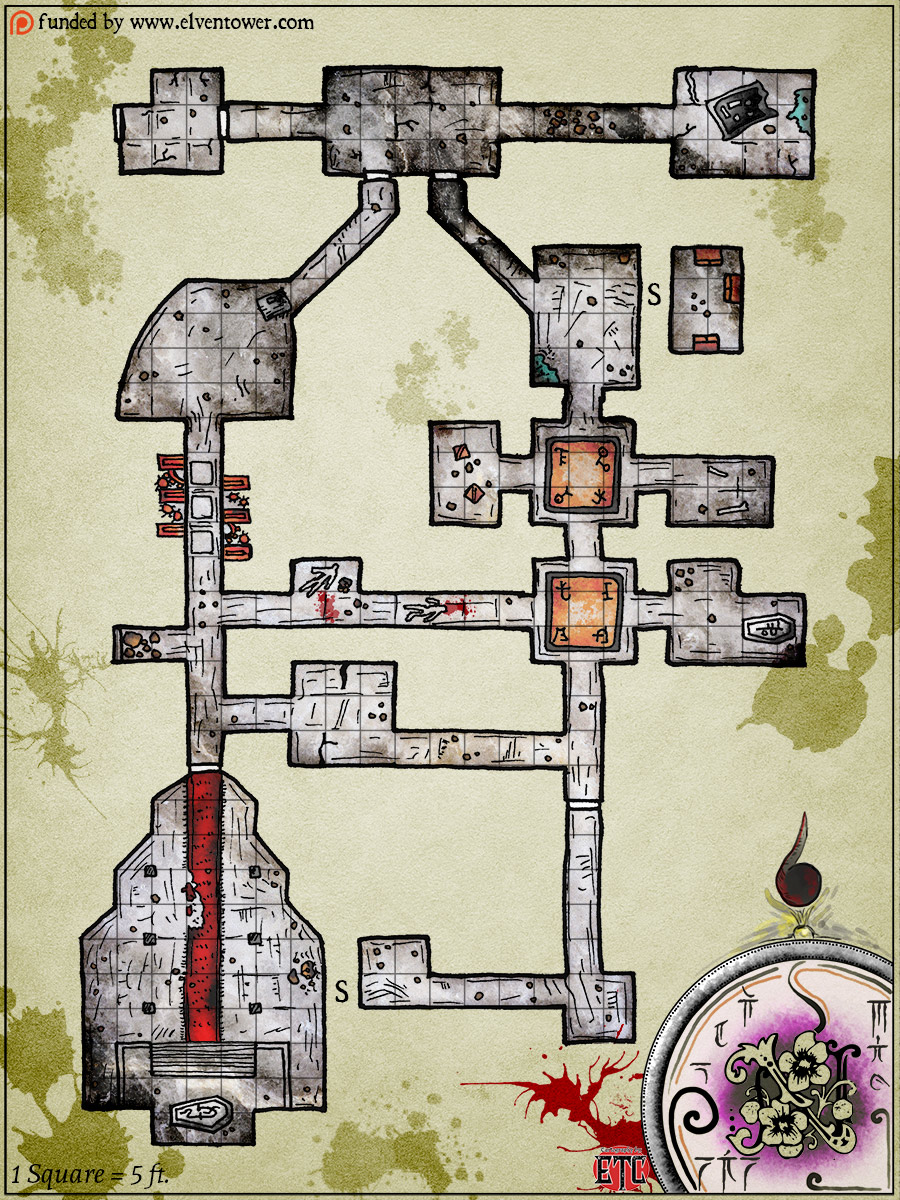 Joff Goert died alone almost a decade back. He was an elven student of magic who worked on his skills for centuries. He was a respected member of the magic council and many wanted to be pupils of him.

As a performer of magic he was called as usual to accompany a group of soldiers to help rid a small town from bandits. Overnight the town was taken over by a group of bandits and sellswords. The town guard was overwhelmed in minutes. Morning came and they had men on the walls, gates closed.

Their intention was to either keep indefinite control of the town or negotiate a ransom from the neighboring capital city. The senate wouldn’t have it and a group of able man and Joff Goert were sent to infiltrate and eliminate the threat. The mission was an utter failure. They lacked information on the enemy but were confident in their abilities, but they could never have guessed the bandits were lead by an ogre mage. Zuldur was his name. Goert had placed some magical auras to make their arrival difficult to detect but it proved useless.

Zuldur knew of their plan and they were ambushed. He was the only survivor, and it was just because of his magical talent, Zuldur thought he was a curiosity. He was kept prisoner in a wet cell and time started to pass.

The bandits eventually got their ransom and abandoned the small town, they took Goert with them. Months passed in captivity, Zuldur would often ask for the wizard to be brought to him so he could entertain him with illusions or conjurations.

Goert stopped resisting and with time became a captive servant, he was given more liberties, however his hate for Zuldur was almost blinding. He discovered that Zuldur was in possession of a crystal orb. He would use it to see distant places. It was probably the reason why he couldn’t be surprised back when they infiltrated the town.

One day when Zuldur was unaware, Joff Goert used the orb to get in touch with the senate, back in the capital. He requested assistance to be rescued. His request was denied, the outlaws had moved away to a neighboring kingdom. The senate did not dare send troops. Goert felt broken inside, as a force grew inside of him like an unstoppable sea wave, hate. Years later the outlaws and Zuldur had an open confrontation with a paladin order. They disbanded and Zuldur was killed. Goert was almost killed or imprisoned again, being thought a bandit himself.

It wasn’t difficult for him to prove his identity, his education was evident in comparison with the lowly peasants that formed the main of the mercenary band. Months later Goert was back in the capital with only one objective, dispatch the members of the senate, one by one for leaving him to the ogre’s mercy. Even Goert would consider this kind of vengeance disproportionate, but after years of slavery, his mind silently broke down and his perception was distorted by aimless hate.

He wasn’t able to kill all of them, he killed 4 senators before being caught. He died in the stake, burned for his crimes. Condemned to such fate by the remaining members of the senate. His late relatives placed his burnt carcass in the crypts under his family manor.

Joff Goert’s burning hate did not die. It became denser and denser, like a cloud of gas coalescing into an ever smaller point. A singularity of darkness and evil that grew everyday. Years later, the darkness in the coffin was so intense it took quasi physical form. It existed though at the same time it did not at all. It opened its eyes and blinked in the darkness. It couldn’t remember its name or its past, but it did recall a group of faces and names, and an objective to kill them and absorb their life forces. It is growing stronger each day, and sooner or later, it will raise and finish what it started. Unless someone gets in the way and stops it.

On the map, there is a hallway in the middle left with some squares on the ground and some type of machinery behind the walls. This is supposed to be a trap, either arrow traps or fire jet traps. The three squares on the floor are the pressure plates that activate the trap.

Supporting indie artists in the RPG community like me, helps make the available content better. If you have used or benefitted from my content, consider visiting my Patreon Page and maybe help with a few dollars. It can be cheap for you and very meaningful for me. Plus, you get access to all my content in high definition and different versions of my maps. With and without grids, numbers and name tags. Some of them even have versions with and without secret rooms. 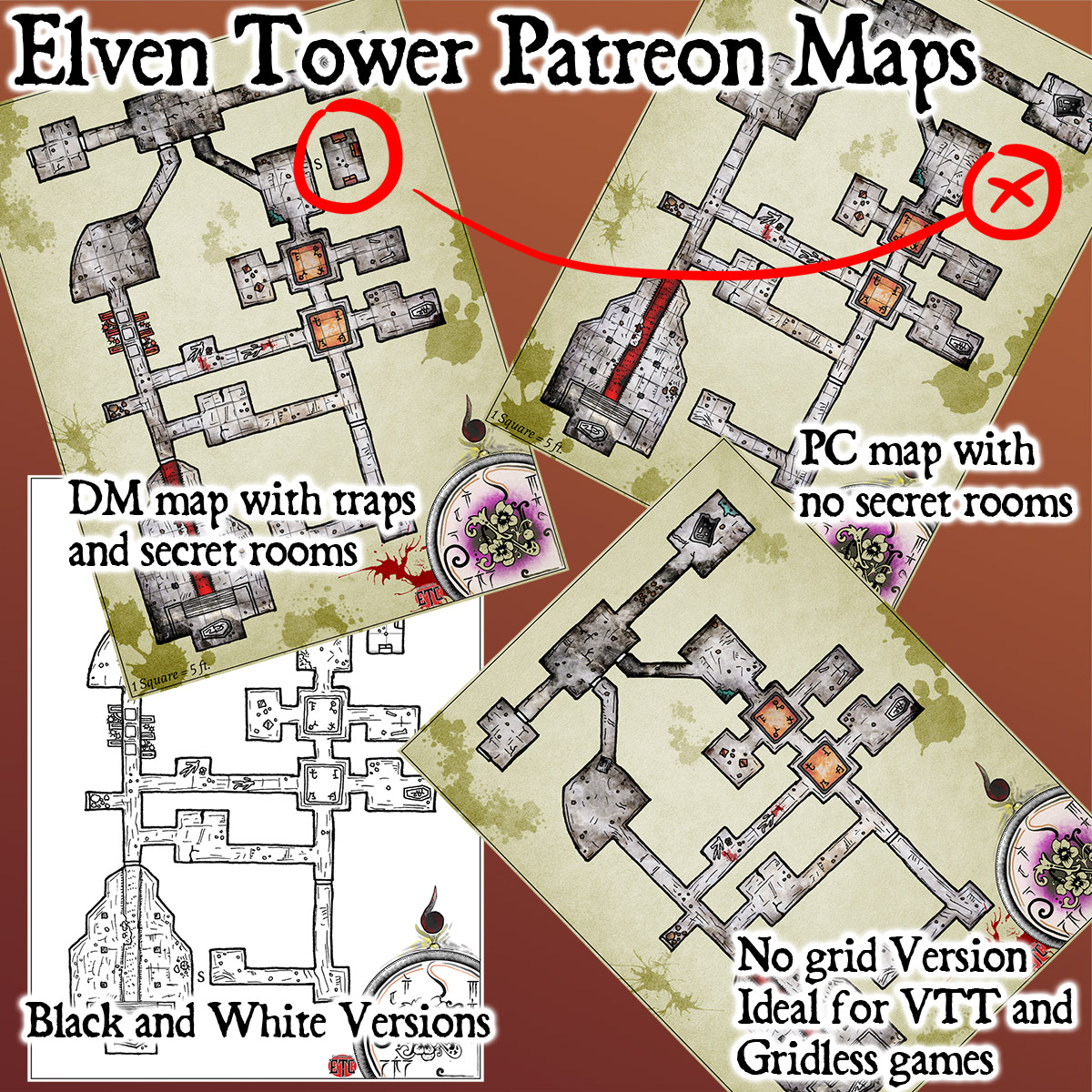