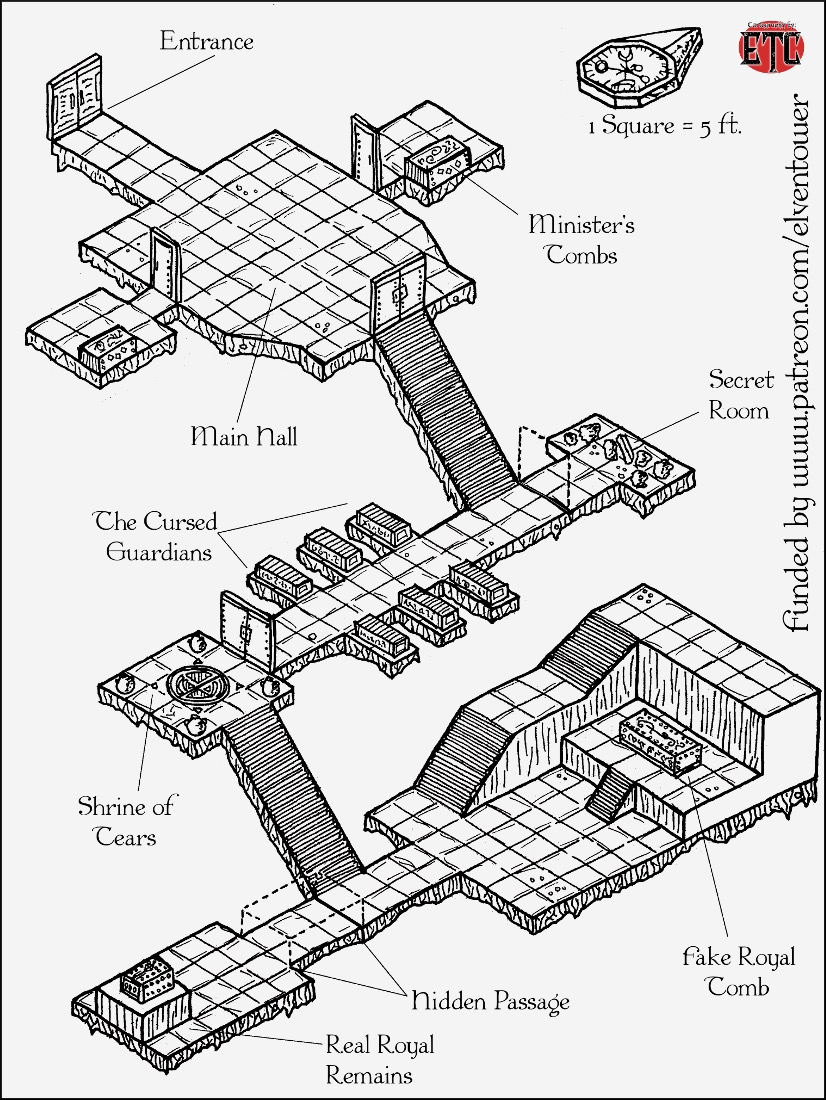 The traditions of the old empire demanded strong reverence to the dead. Regardless of social level or economic possibilities, everybody from the common folk to royalty was expected to pay proper respect to dead members of the family and ancestors. It is said by many that we are always judged and cared about by those who traced our steps in the past. Shall the olden spirits come to unrest, ill would fall upon us.

In noble families these traditions were held by building enormous resting places for kings and families. If a person was important enough, he was buried alone or with his spouse. Other people would share the resting place, honored ministers and sometimes the bodyguards. For less important people, family crypts were the custom. At the bottom of castles and mansions, a wealthy family would maintain a crypt.

In most D&D settings there are ancient crypts and burial places lying about everywhere. Lost of ancient civilizations left forgotten ruins and settlements buried below the known world. You adventurers might stumble upon this place by mistake, when exploring a cave or underground complex.

Alternatively, undead creatures in the crypt might have come to life. If this was an important family’s crypt, then they would be hiring adventurers to clean it and make it safe again.

For lower level parties (1-4), good monsters to use are skeletons, zombies, shadows. And tougher enemies would be specters and even a wraith (somewhat lethal).

For higher level parties (5-7), good monsters to use are the same as above, also ghouls, wights, black oozes and for stronger foes, ghasts, wraiths and ogre zombies.

The uppermost level has the only entrance/exit from the crypt. There is a main hall, where masses would be held before adding a new body to the crypt. There are also tens of niches on the walls. These hold the ashes of people of lesser importance. In the adjoining rooms, the remains of the two more trusted ministers rest.

After a flight of stairs a long hallway begins. There is a secret door in the north wall. A Perception or Investigation check (DC 15) will reveal its presence. In order to open it, a Thieves’ Tools check (DC 17) is required. Inside there is only the ruined pieces of a sarcophagus and probably an undead monster waiting.

In the middle of the hallway, 6 sarcophagi lay waiting. Inside are the remains of the bodyguards of an ancient king. They emerge to attack, they can be zombies or ghouls, depending on the desired difficulty. After a double door, adventurers will find the Shrine of Tears, an old place of worship to a forgotten god. The rituals for eternal undead life of the crypt’s denizens were performed here. An adventurer versed in dark arts or religion can try to pry some information from the murals written in abyssal language.

After a flight of stairs a hallway going north begins. It ends in a fake royal chamber, its purpose is to deter the sacking of the real chamber which is hidden. A big group of undead badies will be waiting here to dispatch unwelcome visitors. The main boss here could be a wraith, a mummy or even a mummy lord for high level play.

There is a secret door in the south wall. A Perception or Investigation check (DC 15) will reveal its presence. In order to open it, a Thieves’ Tools check (DC 17) is required. Behind this secret door is a shallow passage that leads to the real royal chamber. The decorated sarcophagus is really valuable itself. Also, material treasures of the ancient king will be here, a whole treasure chamber.