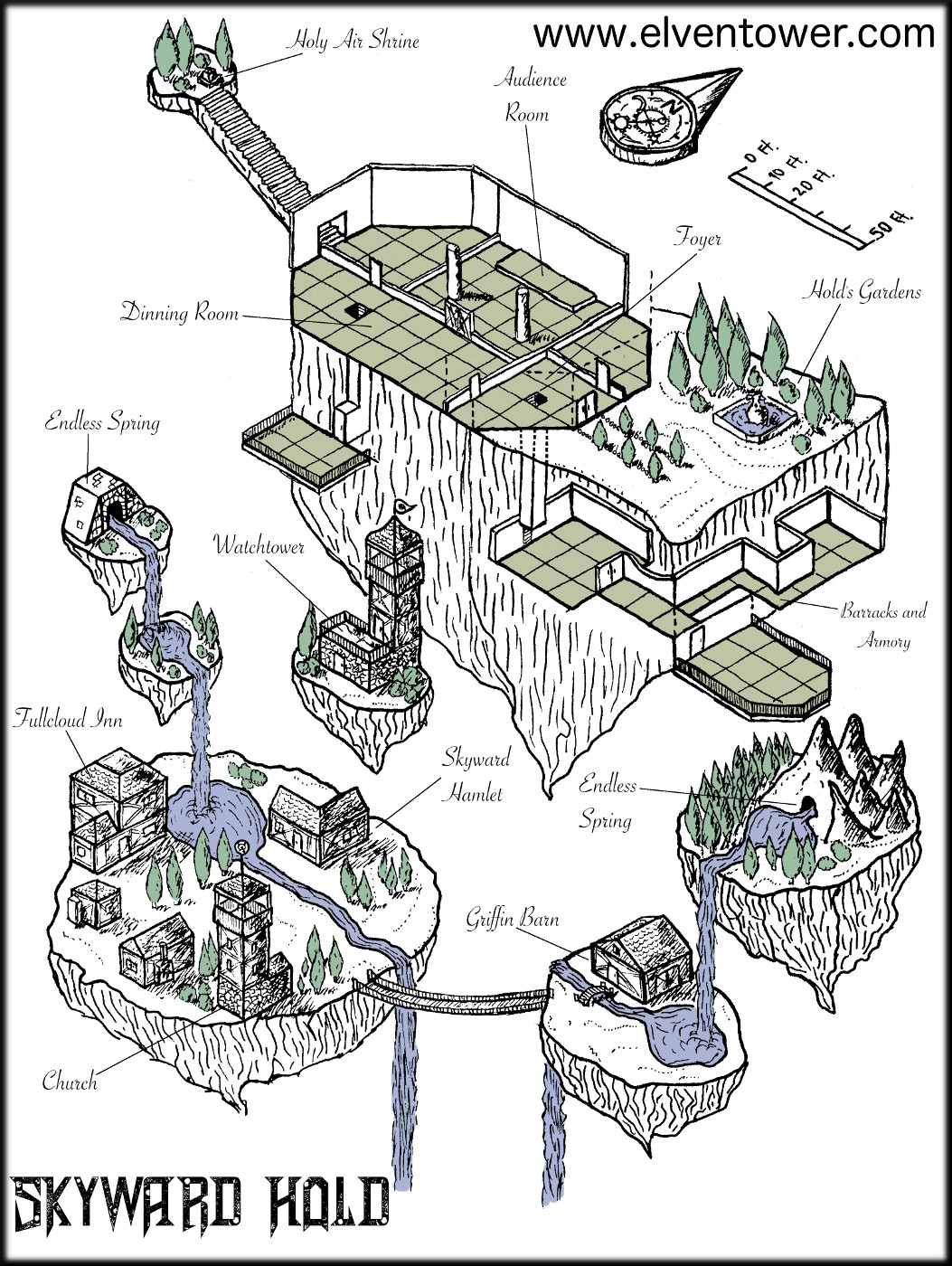 WOAH! What happened to map 39?  Some maps are only released as Patreon exclusive content. If you like my maps and would like to have access to all my creations. Consider joining our boat, backing me financially. You will get access to all the material in Hi-Def version.

Everybody in the kingdom knows about Skyward Hold, the flying town, the floating fortress. Ancient wizards harnessed the power of the wind and bound elemental spirits to big islands of rock. Originally it was used for their guild, but after so many years, now the kingdom has claimed them and uses them as a flying fortress.

Only the best soldiers are assigned to the Skyward Patrol. It requires the best fighters and most disciplined people. This fantastic location can serve as a mission-giving central hub for low-medium level parties. The only way to reach Skyward Hold is by riding griffins or similar flying creatures; or teleportation. Only the most loyal followers or servants of the crown are admitted in Skyward Hold. There could be an entire quest or mission aimed only to pull a favor to get here, or to impress an aristocrat, to be appointed to the patrol.

Captain Dublin Garst is in charge of Skyward Hold. He is a very harsh and aggressive person but despite that, his only goal is the protection of the townsfolk and the realm. If the PCs become agents of Skyward, Captain Dublin will be their boss. There is also a group of six aarakocra who don’t actually serve the kingdom but are friendly enough to help from time to time. They live in the small forest by the endless spring. Only one of them speaks the common tongue, his name in auran cannot be pronounced in common, but he prefers to be called Turkks. They can also be found visiting the air shrine.

A recently hired party might spend the first-month getting training to ride griffins. After that, due to the fortress’ mobility and stealth, different types of missions become available. They could rain down on enemies of the realm or reinforce the defense of settlements under attack. They could be commissioned to recover an ancient artifact from an inaccessible place. The aarakocra could request assistance in doing something, like defending a flying aarakocra village, or binding an air elemental. Any mission given by Captain Dublin should always have the PCs straining themselves to impress him, or at least prevent him from dismissing them back to the ground forces.

Alternate idea.- If the idea of a central guild or hub to give the PCs missions is not appealing or useful. This map could be used in a very different way. It could be just what it is, but in this case, the PCs will need to infiltrate it to recover a powerful magical item that was hidden in the main hold. They will have to be silent and stealthy, or come guns blazing and hope for the best. This is a top-notch military community, even the innkeeper is a soldier. After getting what they wanted, they might need to steal griffins to get out or strike a deal with the aarakocra.

You can find this map in High-Resolution PDF in my patreon account. My mapping ventures are funded through Patreon, It is thanks to people who like my work that I am able to continue mapping and providing RPG original experiences to people all over the world. If you like what I do, consider getting involved and backing me.  What you get is impressive hi-def versions of my maps to be used in your RPG games (these have lower resolution), and the satisfaction of helping the RPG community grow bigger and stronger. Help me get funding and enjoy hi-resolution PDF version of my work.