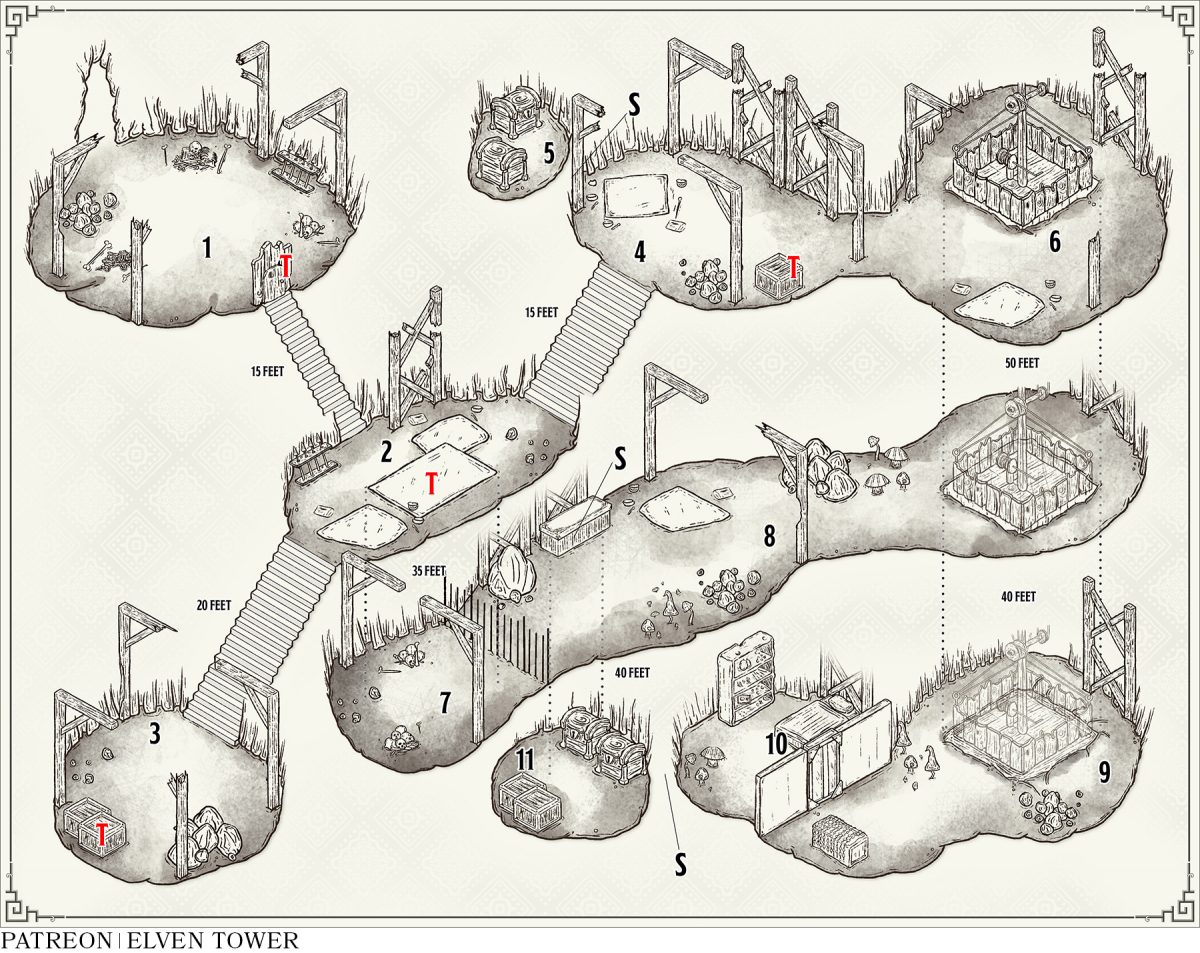 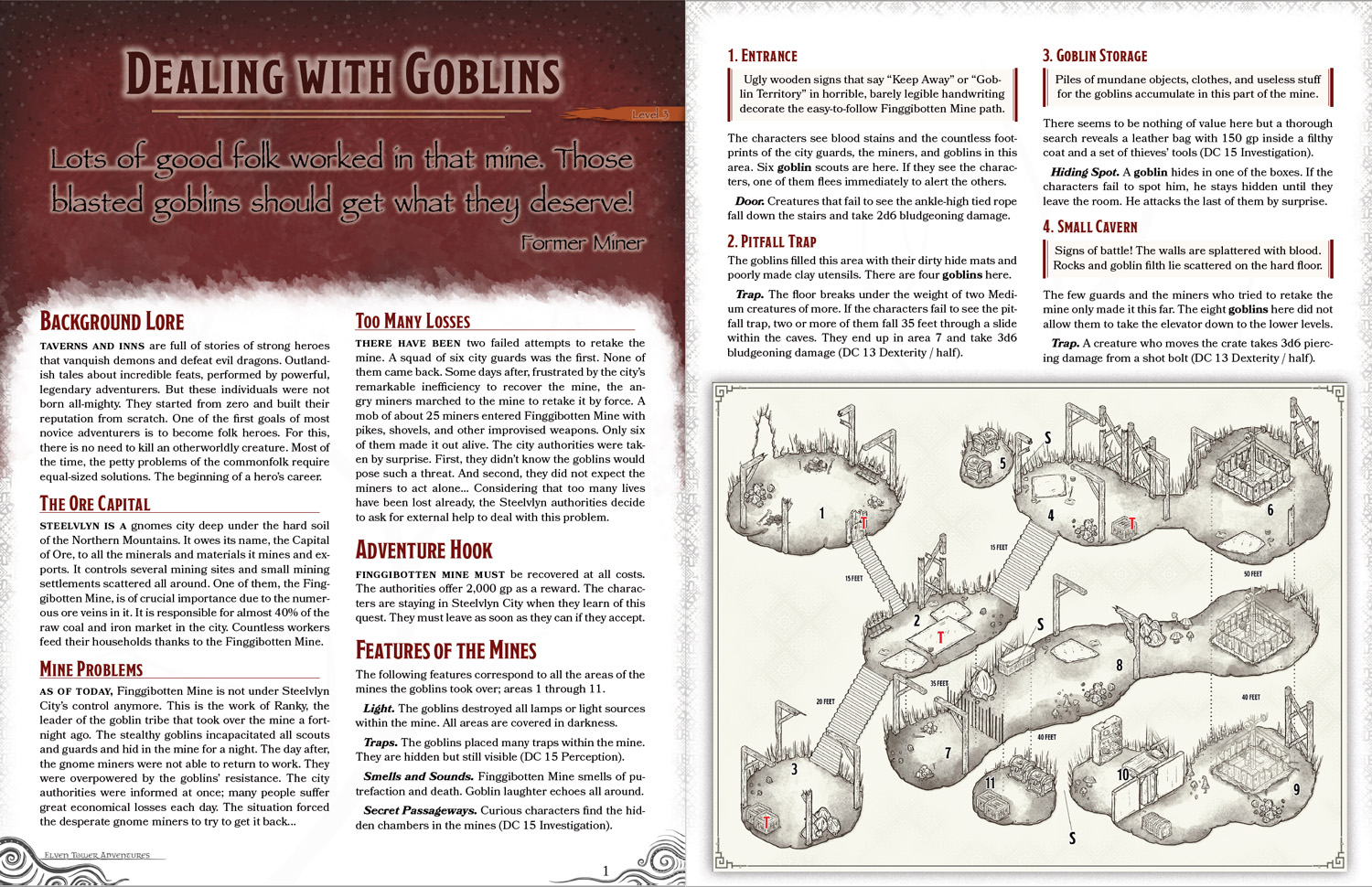 Lots of good folk worked in that mine. Those blasted goblins should get what they deserve!

Taverns and inns are full of stories of strong heroes that vanquish demons and defeat evil dragons. Outland­ish tales about incredible feats, performed by powerful, legendary adventurers. But these individuals were not born all-mighty. They started from zero and built their reputation from scratch. One of the first goals of most novice adventurers is to become folk heroes. For this, there is no need to kill an otherworldly creature. Most of the time, the petty problems of the commonfolk require equal-sized solutions. The beginning of a hero’s career.

Steelvlyn is a gnomes city deep under the hard soil of the Northern Mountains. It owes its name, the Capital of Ore, to all the minerals and materials it mines and ex­ports. It controls several mining sites and small mining settlements scattered all around. One of them, the Fing­gibotten Mine, is of crucial importance due to the numer­ous ore veins in it. It is responsible for almost 40% of the raw coal and iron market in the city. Countless workers feed their households thanks to the Finggibotten Mine.

As of today, Finggibotten Mine is not under Steelvlyn City’s control anymore. This is the work of Ranky, the leader of the goblin tribe that took over the mine a fort­night ago. The stealthy goblins incapacitated all scouts and guards and hid in the mine for a night. The day after, the gnome miners were not able to return to work. They were overpowered by the goblins’ resistance. The city authorities were informed at once; many people suffer great economical losses each day. The situation forced the desperate gnome miners to try to get it back…

There have been two failed attempts to retake the mine. A squad of six city guards was the first. None of them came back. Some days after, frustrated by the city’s remarkable inefficiency to recover the mine, the an­gry miners marched to the mine to retake it by force. A mob of about 25 miners entered Finggibotten Mine with pikes, shovels, and other improvised weapons. Only six of them made it out alive. The city authorities were tak­en by surprise. First, they didn’t know the goblins would pose such a threat. And second, they did not expect the miners to act alone… Considering that too many lives have been lost already, the Steelvlyn authorities decide to ask for external help to deal with this problem.

Finggibotten Mine must be recovered at all costs. The authorities offer 2,000 gp as a reward. The charac­ters are staying in Steelvlyn City when they learn of this quest. They must leave as soon as they can if they accept.

Features of the Mines

The following features correspond to all the areas of the mines the goblins took over; areas 1 through 11.

Light. The goblins destroyed all lamps or light sources within the mine. All areas are covered in darkness.

Traps. The goblins placed many traps within the mine. They are hidden but still visible (DC 15 Perception).

Smells and Sounds. Finggibotten Mine smells of pu­trefaction and death. Goblin laughter echoes all around.

The characters see blood stains and the countless foot­prints of the city guards, the miners, and goblins in this area. Six goblin scouts are here. If they see the charac­ters, one of them flees immediately to alert the others.

Door. Creatures that fail to see the ankle-high tied rope fall down the stairs and take 2d6 bludgeoning damage.

The goblins filled this area with their dirty hide mats and poorly made clay utensils. There are four goblins here.

Trap. The floor breaks under the weight of two Medi­um creatures of more. If the characters fail to see the pit­fall trap, two or more of them fall 35 feet through a slide within the caves. They end up in area 7 and take 3d6 bludgeoning damage (DC 13 Dexterity / half).

Piles of mundane objects, clothes, and useless stuff for the goblins accumulate in this part of the mine.

There seems to be nothing of value here but a thorough search reveals a leather bag with 150 gp inside a filthy coat and a set of thieves’ tools (DC 15 Investigation).

Hiding Spot. A goblin hides in one of the boxes. If the characters fail to spot him, he stays hidden until they leave the room. He attacks the last of them by surprise.

Signs of battle! The walls are splattered with blood. Rocks and goblin filth lie scattered on the hard floor.

The few guards and the miners who tried to retake the mine only made it this far. The eight goblins here did not allow them to take the elevator down to the lower levels.

Trap. A creature who moves the crate takes 3d6 pierc­ing damage from a shot bolt (DC 13 Dexterity / half).

If the characters notice the hidden chamber beyond the mound of rocks and debris, they must spend 10 minutes to remove the obstacle and access this small chamber.

Treasure. The chests contain 200 gp, a 50-foot-long rope, a set silver of thieves’ tools, and a grappling hook.

The elevator works with a complex series of hemp­en ropes and pulleys connected to a central lever.

Five goblins stand by the elevator. One of them descends alone while the rest cover his retreat if they see the char­acters approach. The goblin keeps the elevator down.

Elevator. The characters must climb down using ropes or other equipment if the goblin got the elevator stuck down in area 8 (see above). Pulling the lever on the eleva­tor box makes it ascend or descend. It is slow but steady.

The goblins used steel poles and put them on the ground to create an impromptu cell. Many of the gnomes who tried to retake the mine fell through the pitfall trap in area 2 and are here. There are eleven tired, injured, and famished miners. Four of them are unable to walk.

Five goblins guard this area. They hide to ambush the intruders. If the characters use the elevator, the goblins hide and leave in the elevator to area 9, unseen.

Containers. Pikes, shovels, and simple mining equip­ment are stored here. A curious character finds the se­cret trapdoor compartment below it all (DC 15 Investiga­tion). This tunnel connects to a hidden vault in area 11.

An altar of embroidered leaves and twigs; a dozen goblins kneel by it. Their leader, wearing a crest of feathers and bone collars, speaks loudly to the rest.

The goblin shaman, Ranky, and twelve goblins fight to­gether. For the goblin leader, use the stats of a regular goblin with the following changes: It has 28 hit points, an Intelligence score of 13, and it can cast firebolt, mage hand, and detect magic or burning hands (3/day each).

Iron Door. The goblins were unable to force the lock of this door or break it down (DC 16 Thieves Tools).

Organized books and documents fill the shelf and the desk in the foreman’s dark, damp, bedroom.

This is Harvy Dintlen’s room. He is in charge of the mine but is unemployed since the goblins took over. The place remains clean and untouched by the goblin invaders.

Treasure. The characters find a golden locket (150 gp) and a small silver ring with a ruby (200 gp) if they search the room (DC 15 Investigation). Both pieces are Harvy’s.

If the characters find this secret area, they have access to Finggibotten Mine’s treasury. There are 2,000 gp worth of silverware and varied coins. The chests contain a herbalism kit, two potions of healing, and a +1 dagger.

The goblins are defeated. Ranky tries to parley. He tells the characters they can keep everything beyond the iron door if their lives are spared. They can say the goblins stole it or wrecked it! “There would be no one to blame if you kill us, we’ll never come back, promise.” He says. If they agree, the remaining goblins leave. What the characters do with the treasure is up to them.

My Name is Justice

The characters do not accept the goblins’ terms and eradicate them like vermin. The authorities of Steelvlyn City pay them. If the treasury is missing, thorough inves­tigations occur at the crime scene. 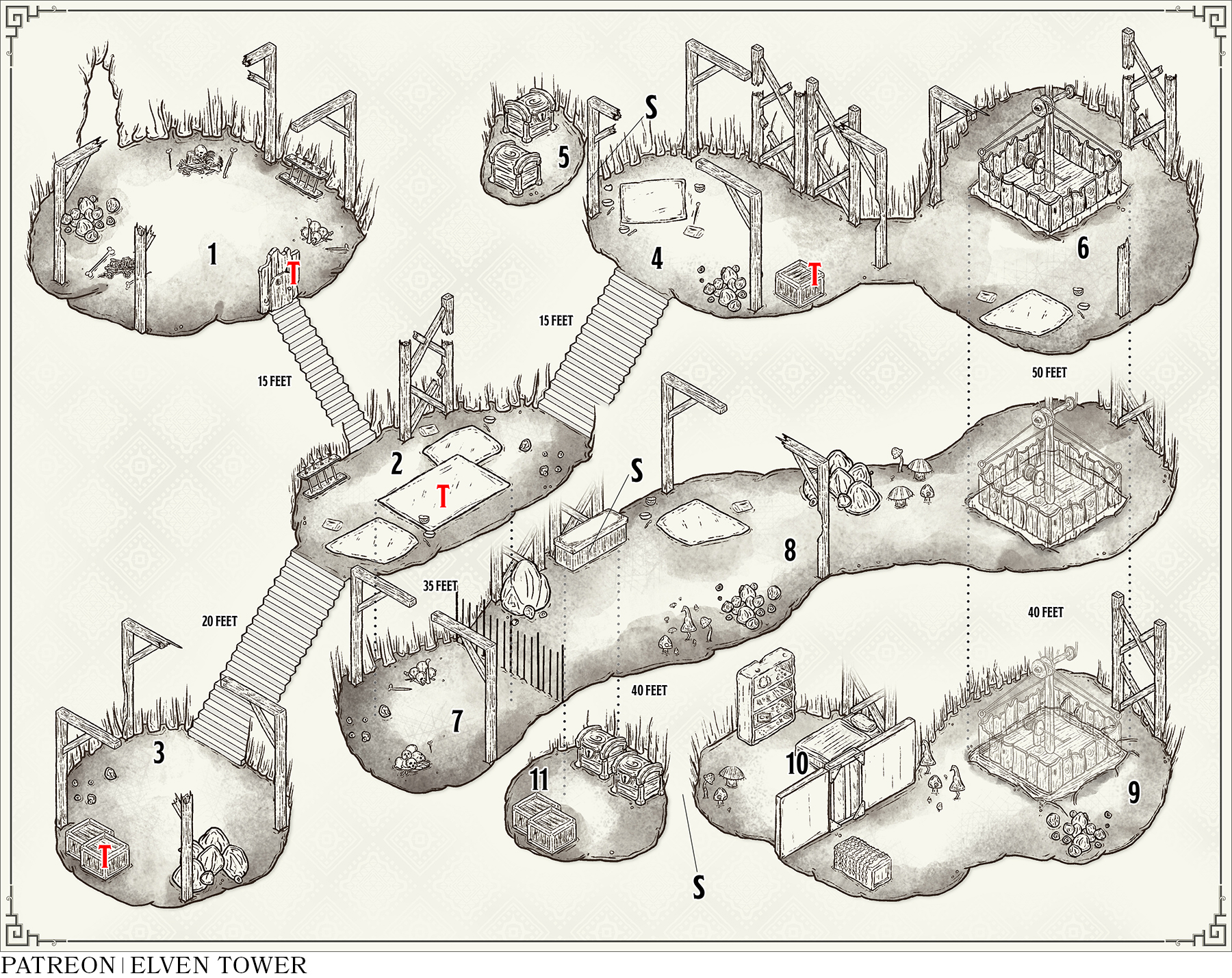