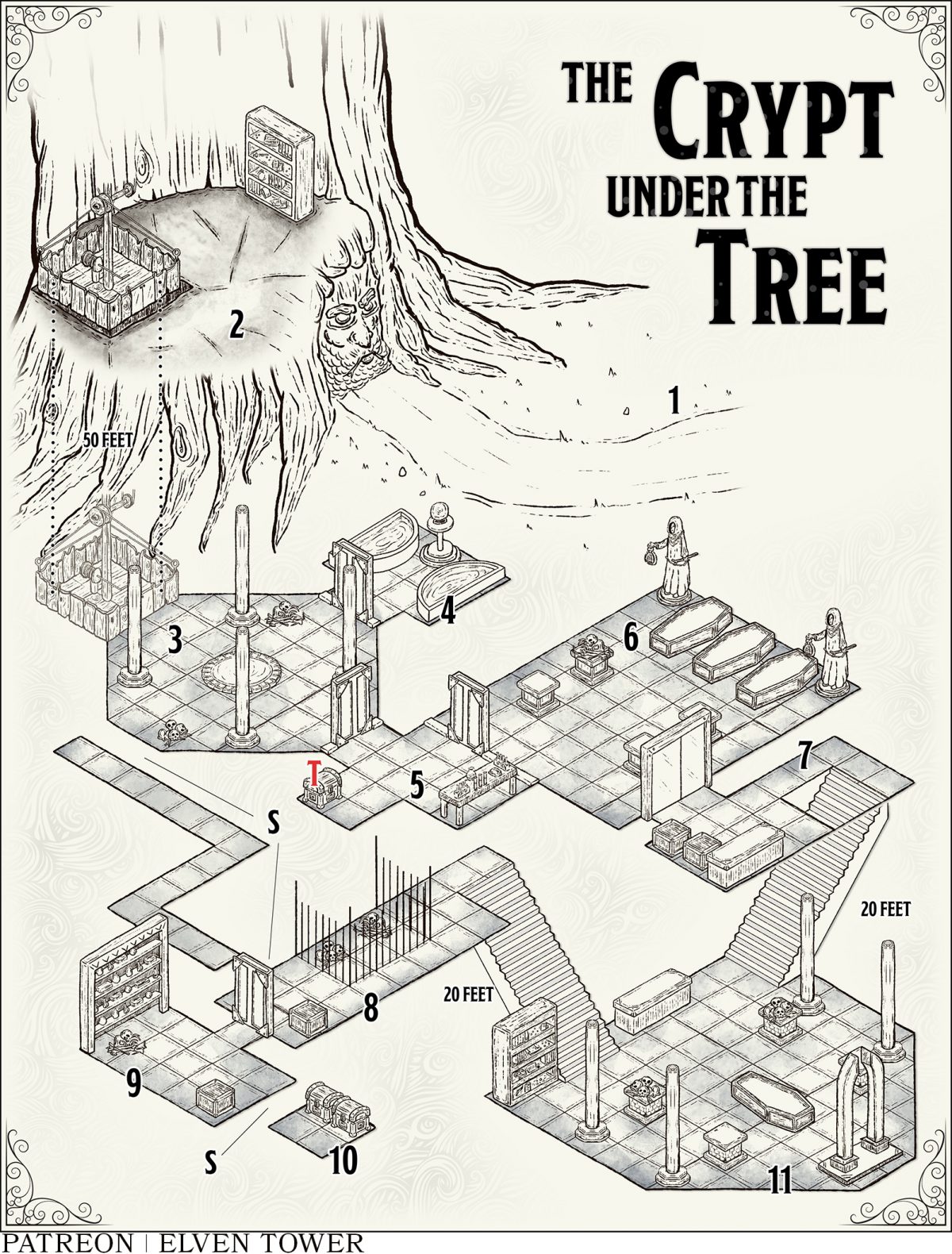 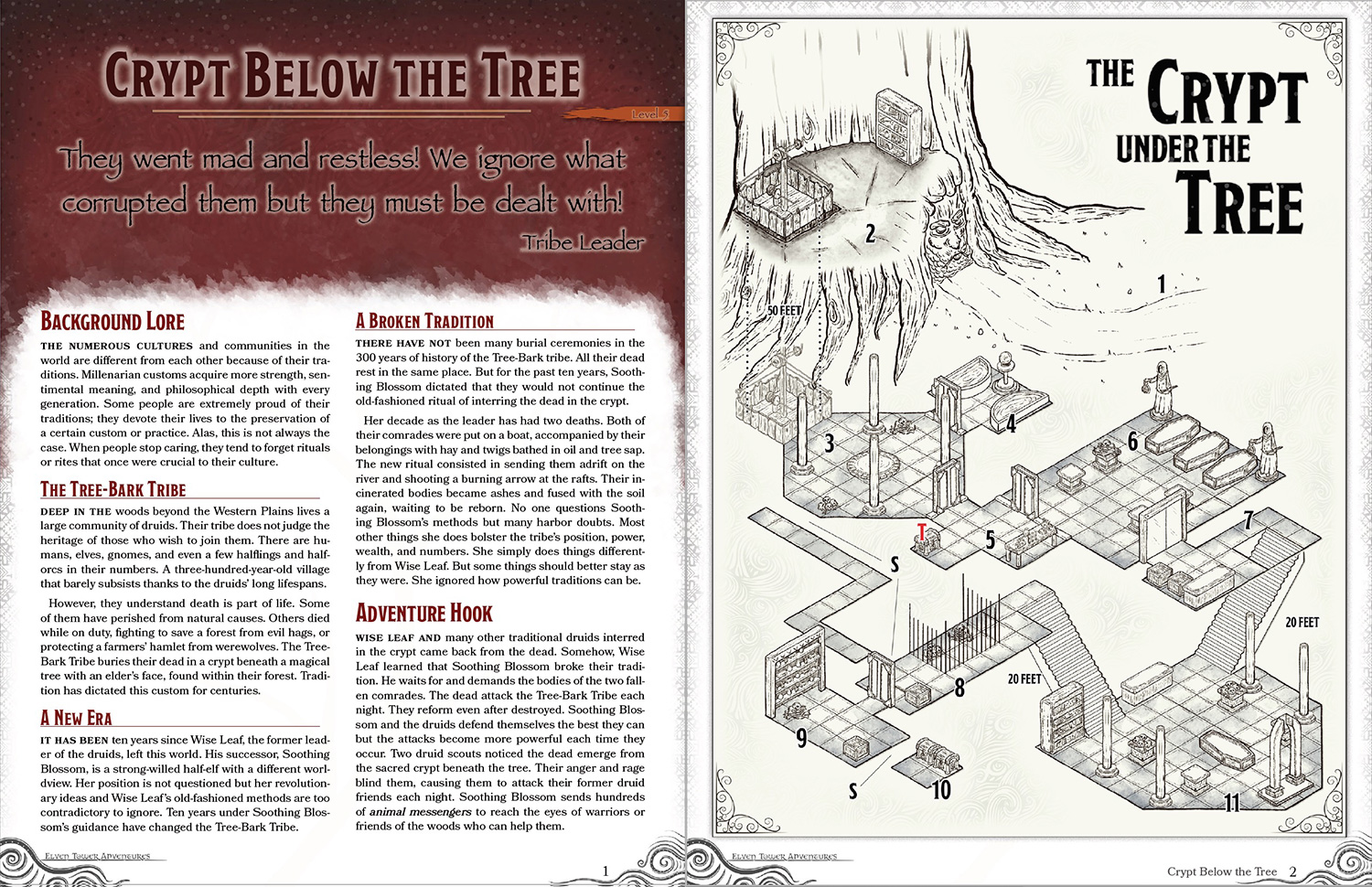 They went mad and restless! We ignore what corrupted them but they must be dealt with!
Tribe Leader

The numerous cultures and communities in the world are different from each other because of their tra­ditions. Millenarian customs acquire more strength, sen­timental meaning, and philosophical depth with every generation. Some people are extremely proud of their traditions; they devote their lives to the preservation of a certain custom or practice. Alas, this is not always the case. When people stop caring, they tend to forget rituals or rites that once were crucial to their culture.

Deep in the woods beyond the Western Plains lives a large community of druids. Their tribe does not judge the heritage of those who wish to join them. There are hu­mans, elves, gnomes, and even a few halflings and half-orcs in their numbers. A three-hundred-year-old village that barely subsists thanks to the druids’ long lifespans.

However, they understand death is part of life. Some of them have perished from natural causes. Others died while on duty, fighting to save a forest from evil hags, or protecting a farmers’ hamlet from werewolves. The Tree- Bark Tribe buries their dead in a crypt beneath a magical tree with an elder’s face, found within their forest. Tradi­tion has dictated this custom for centuries.

It has been ten years since Wise Leaf, the former lead­er of the druids, left this world. His successor, Soothing Blossom, is a strong-willed half-elf with a different worl­dview. Her position is not questioned but her revolution­ary ideas and Wise Leaf’s old-fashioned methods are too contradictory to ignore. Ten years under Soothing Blos­som’s guidance have changed the Tree-Bark Tribe.

There have not been many burial ceremonies in the 300 years of history of the Tree-Bark tribe. All their dead rest in the same place. But for the past ten years, Sooth­ing Blossom dictated that they would not continue the old-fashioned ritual of interring the dead in the crypt.

Her decade as the leader has had two deaths. Both of their comrades were put on a boat, accompanied by their belongings with hay and twigs bathed in oil and tree sap. The new ritual consisted in sending them adrift on the river and shooting a burning arrow at the rafts. Their in­cinerated bodies became ashes and fused with the soil again, waiting to be reborn. No one questions Sooth­ing Blossom’s methods but many harbor doubts. Most other things she does bolster the tribe’s position, power, wealth, and numbers. She simply does things different­ly from Wise Leaf. But some things should better stay as they were. She ignored how powerful traditions can be.

Wise Leaf and many other traditional druids interred in the crypt came back from the dead. Somehow, Wise Leaf learned that Soothing Blossom broke their tradi­tion. He waits for and demands the bodies of the two fall­en comrades. The dead attack the Tree-Bark Tribe each night. They reform even after destroyed. Soothing Blos­som and the druids defend themselves the best they can but the attacks become more powerful each time they occur. Two druid scouts noticed the dead emerge from the sacred crypt beneath the tree. Their anger and rage blind them, causing them to attack their former druid friends each night. Soothing Blossom sends hundreds of animal messengers to reach the eyes of warriors or friends of the woods who can help them.

The following features correspond to the tree with a face and the underground crypt below it, areas 1 to 11.

Light. All areas of the crypt feature sconces with con­tinual flame spells. If removed, the magic fades.

Smells and Sounds. A magical sweet smell of lav­ender and cinnamon permeates the crypt. The druids placed these incantations a long time ago. However, the grunts and angry growls of the dead can be heard too.

The thick woods recede and give way to a grassy clearing. At its center, a massive tree with a face ob­serves the world around it from its eyes of bark.

The characters must traverse the depths of the forest to reach this area. The Tree-Bark Tribe does not come. Soothing Blossom explains it is not in their customs to come here anymore. They wish to respect the dead.

The druid leader lies (DC 18 Insight). Deep inside, she is afraid of what she has done. She does not dare look at their comrades or Wise Leaf’s undead manifestations.

Entrance. The magical tree opens its mouth to form a door whenever the characters approach to let them in. This is Wise Leaf’s doing. He wants them to delve inside.

The hollow interior of the tree features a few pieces of wooden furniture and a wooden elevator.

The elevator supports up to 5 Medium creatures. The pulley-powered device descends 50 feet underground.

Wise Leaf. The former leader of the druid warns the characters during their descent. A spectral voice says: “We are the ones who were wronged. Leave now, or feel the rage of the real members of the Tree-Bark Druids!”

When the characters reach this area, three shadows and three specters come out of the dark and attack them.

Secret Corridor. There is a pushable brick by the west wall. This passage takes to area 8 (DC 17 Investigation).

The liquid in the ponds used to be holy water. The dead’s anger and hatred turned it black and smelly. If the char­acters interact with the crystal ball, Wise Leaf (wraith mage) can see them and can target one or many of them with an attack or a spell each round. A dispel magic spell rends the crystal ball inert and useless.

Mundane tools and objects lie on a table by the south wall. A fake chest rests on a small alcove to the west.

Trap. The chest shoots poison darts at anyone that touches it. The darts cause 1d4 poison damage and the victim is poisoned for 1 hour (DC 16 Constitution).

The characters encounter three wights and four skele­tons in this chamber. The dead fight until slain.

The crates and the stone container here have linens, old clothes, ceremonial robes, and mundane objects.

Some druids in the past asked Wise Leaf about the pur­pose of this cell. He just said it was for tomb-robbers. But he also said the iron bars had another use for him. He never said anything to raise more suspicions, though.

Trap. If a character falls from area 5, they can use sheer force to bend the bars (DC 20 Strength) and es­cape. Otherwise, the key to open the cell is in area 10.

Dozens of wooden containers, leather bags, and stone boxes adorn the walls of this columbarium.

The spirits in this area remain calm if the characters keep their hands to themselves. Four shadows and six specters emerge if they lay but a finger on their ashes.

A secret button slides a section of the wall (DC 17 In­vestigation). The revealed passage leads to area 10.

Treasure. If the characters defeat all the undead in this area, they can freely pillage the place. There are 2,500 gp worth of small pieces of jewelry and some random coinage. If they search even further, they find a wand of web buried under the ashes (DC 19 Investigation).

The location of this vault was only known by Wise Leaf and now Soothing Blossom. But she does not want any­thing to do with their ancient traditions anymore. She forwent everything kept in here to forge a new era.

Treasure. The chests contain 3,000 gp worth of coins and small gems. There is a +2 studded leather armor, and ten, level 1 to 3, random druid spell scrolls.

Due to their long lifespans, Wise Leaf was the first tribe leader of the Tree-Bark druids to be interred in the crypt. Thus, the ornate place of honor he holds.

“I must apologize. Our hateful minds were not ready for life after death. We have not treated you as welcomed visitors. But hear me out, strong war­riors, for you have been deceived. ‘Tis I, Wise Leaf, who was the leader of the Tree Bark Druids in life. Soothing Blossom aims to destroy the history we built for hundreds of years. Change our ways. We cannot find eternal rest knowing that our fall­en comrades are subject to pagan funerary rituals. Help us stop her and save our traditions, strangers!”

Treasure. Wise Leaf’s sarcophagus contains a staff of the woodlands, a +1 scimitar, a set of three immovable rods, and a ring of the ram. The characters can take the magic items stored here if they stay loyal to Soothing Blossom and defeat the undead here (see Development).

Despite being welcomed with violence and anger. The characters side with Wise Leaf and the offended dead druids after they hear what they have to say. The characters believe that Soothing Blossom is destroying a valuable custom. Wise Leaf tells the characters they can keep the relics in the crypt as long as they confront Soothing Blossom and convince her to change her ways, even by force. If the characters comply, the druid leader resists and fights back (the nature of this encounter is up to the GM’s discretion). If beaten in combat, she sur­renders. The old ways shall be kept. Alas, she does not hide her anger at the characters’ sordid betrayal. Sooth­ing Blossom shall not forget their intrusion… 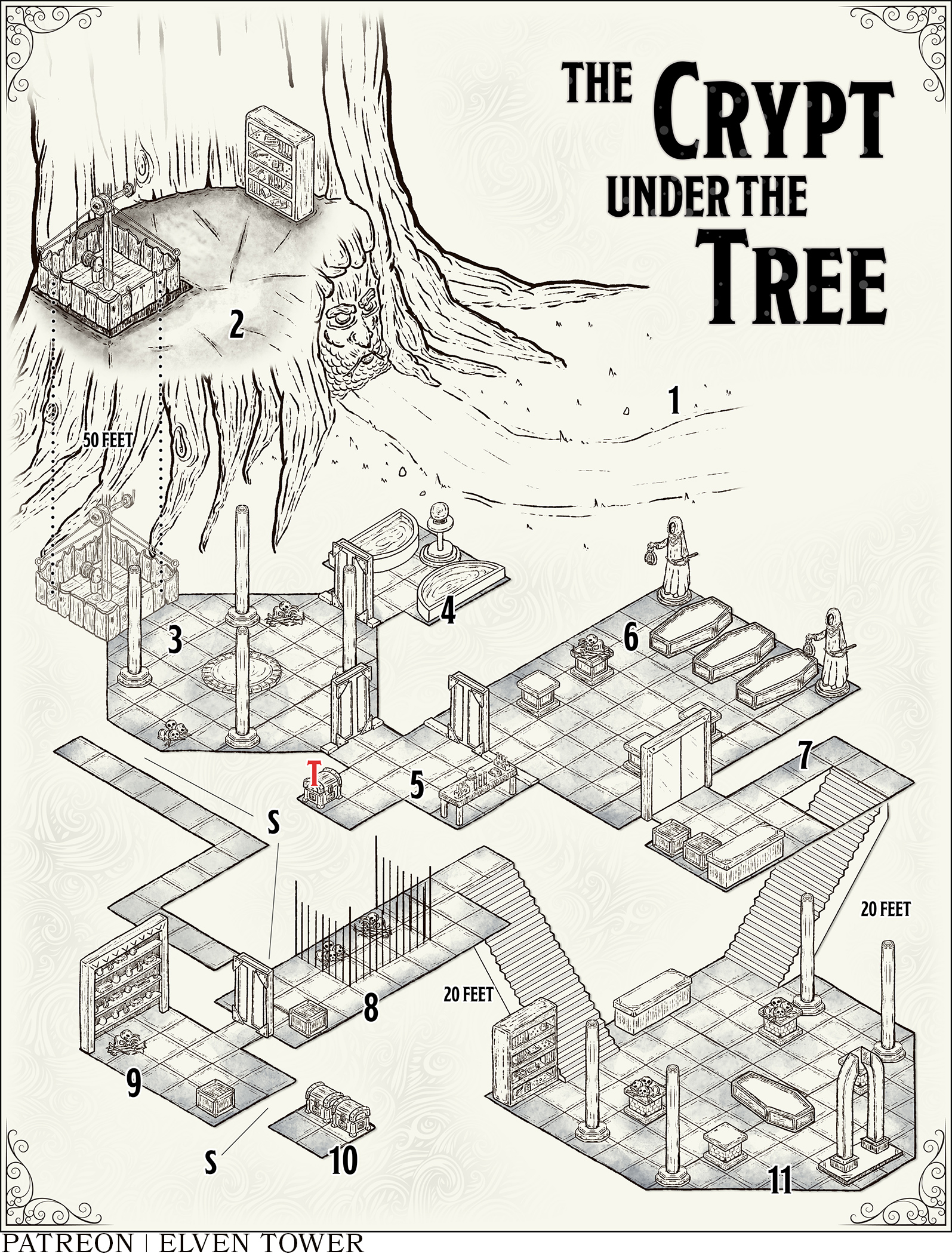