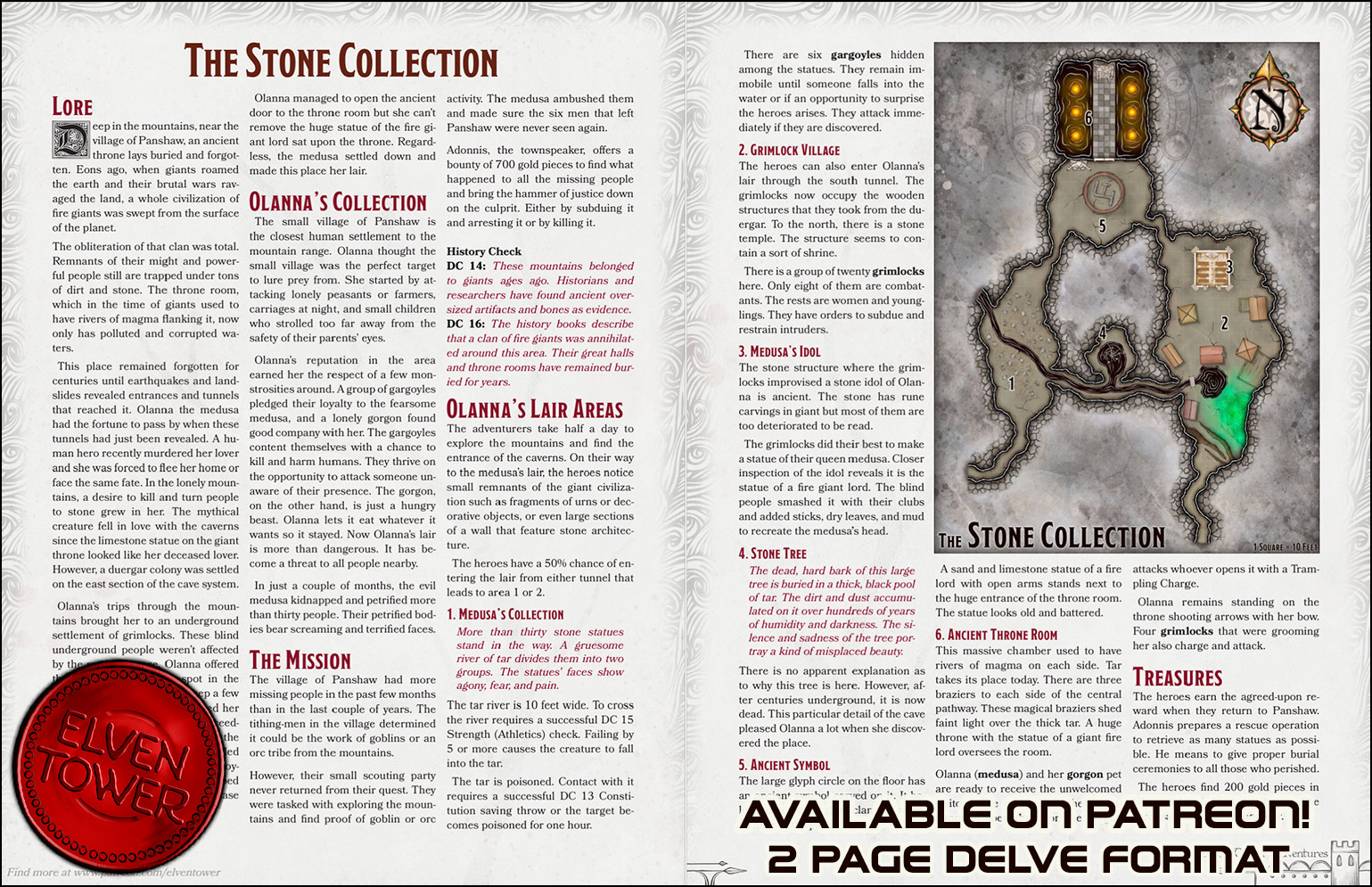 Deep in the mountains, near the village of Panshaw, an ancient throne lays buried and forgotten. Eons ago, when giants roamed the earth and their brutal wars ravaged the land, a whole civilization of fire giants was swept from the surface of the planet.

The obliteration of that clan was total. Remnants of their might and powerful people still are trapped under tons of dirt and stone. The throne room, which in the time of giants used to have rivers of magma flanking it, now only has polluted and corrupted waters.

This place remained forgotten for centuries until earthquakes and landslides revealed entrances and tunnels that reached it. Olanna the medusa had the fortune to pass by when these tunnels had just been revealed. A human hero recently murdered her lover and she was forced to flee her home or face the same fate. In the lonely mountains, a desire to kill and turn people to stone grew in her. The mythical creature fell in love with the caverns since the limestone statue on the giant throne looked like her deceased lover. However, a duergar colony was settled on the east section of the cave system.

Olanna’s trips through the mountains brought her to an underground settlement of grimlocks. These blind underground people weren’t affected by the medusa’s gaze. Olanna offered the blind people a safe spot in the mountains and the right to keep a few of her prey as food if they helped her clear the cave. Together, they succeeded and the grimlocks occupied the duergar former buildings and settled down. The grimlocks agreed to be loyal to the medusa as long as she helped them drive the duergars away in case they returned.

Olanna managed to open the ancient door to the throne room but she can’t remove the huge statue of the fire giant lord sat upon the throne. Regardless, the medusa settled down and made this place her lair.

The small village of Panshaw is the closest human settlement to the mountain range. Olanna thought the small village was the perfect target to lure prey from. She started by attacking lonely peasants or farmers, carriages at night, and small children who strolled too far away from the safety of their parents’ eyes.

Olanna’s reputation in the area earned her the respect of a few monstrosities around. A group of gargoyles pledged their loyalty to the fearsome medusa, and a lonely gorgon found good company with her. The gargoyles content themselves with a chance to kill and harm humans. They thrive on the opportunity to attack someone unaware of their presence. The gorgon, on the other hand, is just a hungry beast. Olanna lets it eat whatever it wants so it stayed. Now Olanna’s lair is more than dangerous. It has become a threat to all people nearby.

In just a couple of months, the evil medusa kidnapped and petrified more than thirty people. Their petrified bodies bear screaming and terrified faces.

The village of Panshaw had more missing people in the past few months than in the last couple of years. The tithing-men in the village determined it could be the work of goblins or an orc tribe from the mountains.

However, their small scouting party never returned from their quest. They were tasked with exploring the mountains and find proof of goblin or orc activity. The medusa ambushed them and made sure the six men that left Panshaw were never seen again.

Adonnis, the townspeaker, offers a bounty of 700 gold pieces to find what happened to all the missing people and bring the hammer of justice down on the culprit. Either by subduing it and arresting it or by killing it.

DC 14: These mountains belonged to giants ages ago. Historians and researchers have found ancient oversized artifacts and bones as evidence.

DC 16: The history books describe that a clan of fire giants was annihilated around this area. Their great halls and throne rooms have remained buried for years.

The adventurers take half a day to explore the mountains and find the entrance of the caverns. On their way to the medusa’s lair, the heroes notice small remnants of the giant civilization such as fragments of urns or decorative objects, or even large sections of a wall that feature stone architecture.

The heroes have a 50% chance of entering the lair from either tunnel that leads to area 1 or 2.

More than thirty stone statues stand in the way. A gruesome river of tar divides them into two groups. The statues’ faces show agony, fear, and pain.

The tar river is 10 feet wide. To cross the river requires a successful DC 15 Strength (Athletics) check. Failing by 5 or more causes the creature to fall into the tar.

The tar is poisoned. Contact with it requires a successful DC 13 Constitution saving throw or the target becomes poisoned for one hour.

There are six gargoyles hidden among the statues. They remain immobile until someone falls into the water or if an opportunity to surprise the heroes arises. They attack immediately if they are discovered.

The heroes can also enter Olanna’s lair through the south tunnel. The grimlocks now occupy the wooden structures that they took from the duergar. To the north, there is a stone temple. The structure seems to contain a sort of shrine.

There is a group of twenty grimlocks here. Only eight of them are combatants. The rests are women and younglings. They have orders to subdue and restrain intruders.

The stone structure where the grimlocks improvised a stone idol of Olanna is ancient. The stone has rune carvings in giant but most of them are too deteriorated to be read.

The grimlocks did their best to make a statue of their queen medusa. Closer inspection of the idol reveals it is the statue of a fire giant lord. The blind people smashed it with their clubs and added sticks, dry leaves, and mud to recreate the medusa’s head.

The dead, hard bark of this large tree is buried in a thick, black pool of tar. The dirt and dust accumulated on it over hundreds of years of humidity and darkness. The silence and sadness of the tree portray a kind of misplaced beauty.

There is no apparent explanation as to why this tree is here. However, after centuries underground, it is now dead. This particular detail of the cave pleased Olanna a lot when she discovered the place.

The large glyph circle on the floor has an ancient symbol carved on it. It belonged to the fire giant clan that resided here in the past.

A sand and limestone statue of a fire lord with open arms stands next to the huge entrance of the throne room. The statue looks old and battered.

This massive chamber used to have rivers of magma on each side. Tar takes its place today. There are three braziers to each side of the central pathway. These magical braziers shed faint light over the thick tar. A huge throne with the statue of a giant fire lord oversees the room.

Olanna (medusa) and her gorgon pet are ready to receive the unwelcomed visitors. The moment the heroes attempt to open the door, the gorgon attacks whoever opens it with a Trampling Charge.

Olanna remains standing on the throne shooting arrows with her bow. Four grimlocks that were grooming her also charge and attack.

The heroes earn the agreed-upon reward when they return to Panshaw. Adonnis prepares a rescue operation to retrieve as many statues as possible. He means to give proper burial ceremonies to all those who perished.

The heroes find 200 gold pieces in Olanna’s lair behind the throne. The medusa’s bow is a +1 longbow.