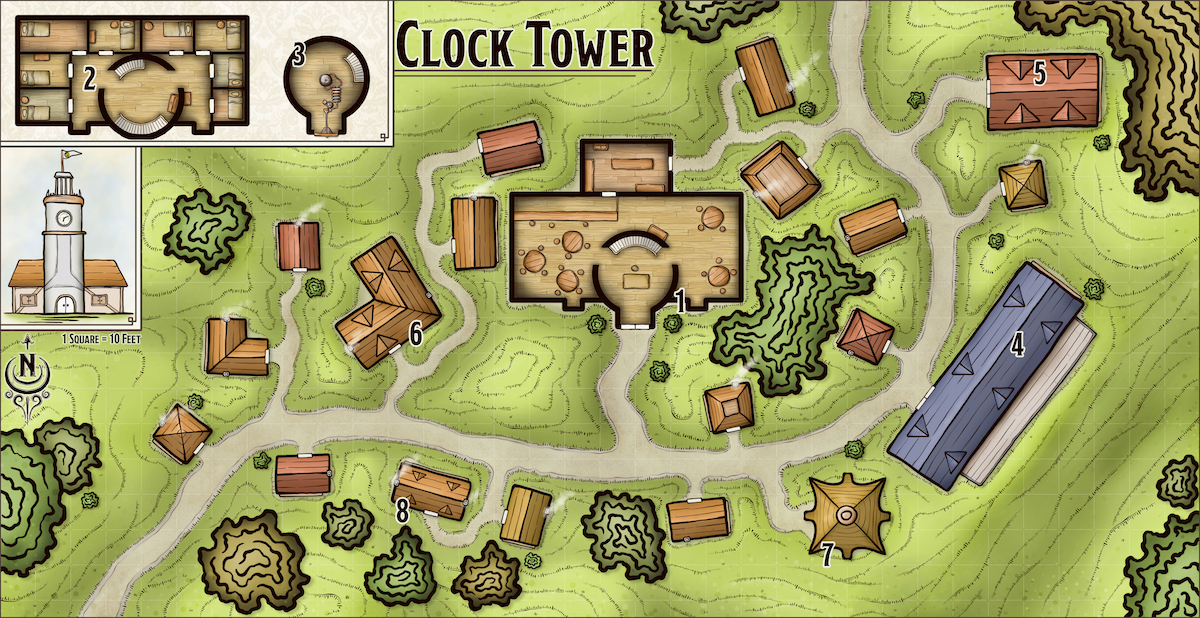 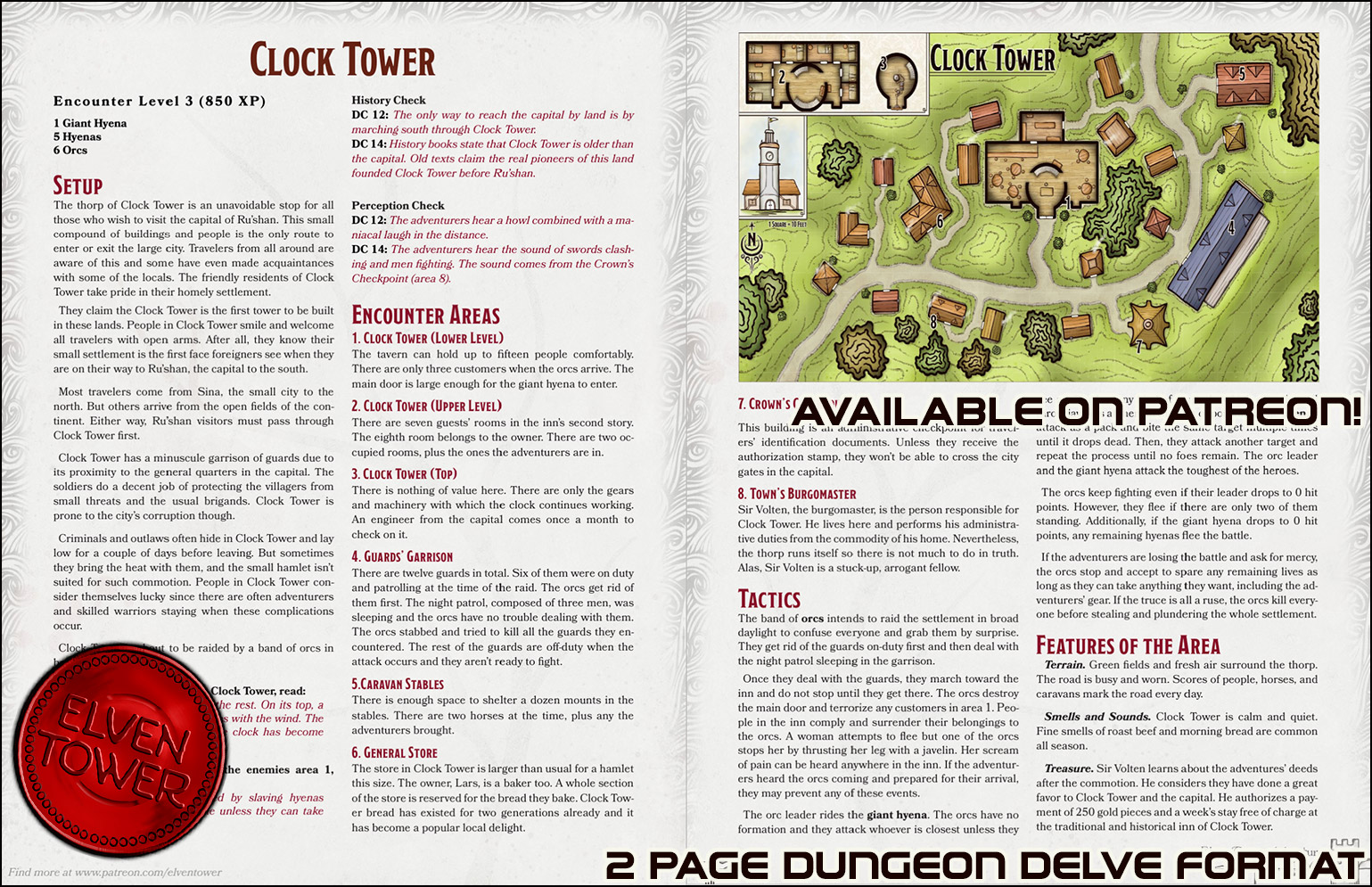 The thorp of Clock Tower is an unavoidable stop for all those who wish to visit the capital of Ru’shan. This small compound of buildings and people is the only route to enter or exit the large city. Travelers from all around are aware of this and some have even made acquaintances with some of the locals. The friendly residents of Clock Tower take pride in their homely settlement.

They claim the Clock Tower is the first tower to be built in these lands. People in Clock Tower smile and welcome all travelers with open arms. After all, they know their small settlement is the first face foreigners see when they are on their way to Ru’shan, the capital to the south.

Most travelers come from Sina, the small city to the north. But others arrive from the open fields of the continent. Either way, Ru’shan visitors must pass through Clock Tower first.

Being on the road to such a large city has its pros and cons. Clock Tower has a minuscule garrison of guards due to its proximity to the general quarters in the capital. The soldiers do a decent job of protecting the villagers from small threats and the usual brigands. However, the small thorp is so close to Ru’shan that it is prone to the city’s corruption and dangers.

Criminals and outlaws often hide in Clock Tower and lay low for a couple of days before leaving. But sometimes they bring the heat with them, and the small settlement isn’t suited for such commotion. People in Clock Tower consider themselves lucky since there are often adventurers and skilled warriors staying when these complications occur.

Clock Tower is about to be raided by a band of orcs in broad daylight. The adventurers relax and enjoy themselves at the inn, but perhaps they hear something before the orcs arrive.

When the characters arrive in Clock Tower, read:

A single building towers over the rest. On its top, a flag with the capital’s crest waves with the wind. The marble-white tower with a large clock has become the landmark of this thorp.

When the characters confront the enemies area 1, read:

A group of orcs accompanied by slaving hyenas threatens to murder everyone unless they can take what they want.

DC 12: The only way to reach the capital by land is by marching south through Clock Tower.

DC 14: History books state that Clock Tower is older than the capital. Old texts claim the real pioneers of this land founded Clock Tower before Ru’shan.

DC 12: The adventurers hear a howl combined with a maniacal laugh in the distance.

DC 14: The adventurers hear the sound of swords clashing and men fighting. The sound comes from the Crown’s  Checkpoint (area 8).

The tavern can hold up to fifteen people comfortably. There are only three customers when the orcs arrive. The main door is large enough for the giant hyena to enter.

There are seven guests’ rooms in the inn’s second story. The eighth room belongs to the owner. There are two occupied rooms, plus the ones the adventurers are in.

There is nothing of value here. There are only the gears and machinery with which the clock continues working. An engineer from the capital comes once a month to check on it.

There are twelve guards in total. Six of them were on duty and patrolling at the time of the raid. The orcs got rid of them first. The night patrol, composed of three men, was sleeping and the orcs had no trouble dealing with them. The orcs stabbed and tried to kill all the guards they encountered. The rest of the guards are off-duty when the attack occurs and they aren’t ready to fight.

There is enough space to shelter a dozen mounts in the stables. There are two horses at the time, plus any the adventurers brought.

The store in Clock Tower is larger than usual for a hamlet this size. The owner, Lars, is a baker too. A whole section of the store is reserved for the bread they bake. Clock Tower bread has existed for two generations already and it has become a popular local delight.

This building is an administrative checkpoint for travelers. They must come here and show their papers and identification documents. Unless they receive the authorization stamp, they won’t be able to cross the city gates in the capital.

Sir Volten, the burgomaster, is the person responsible for Clock Tower. He lives here and performs his administrative duties from the commodity of his home. Nevertheless, the thorp runs itself so there is not much to do in truth. Alas, Sir Volten is a stuck-up fellow who walks with the poise of a king.

The band of orcs intends to raid the hamlet in broad daylight to confuse everyone and grab them by surprise. They get rid of the guards on-duty first and then deal with the night patrol sleeping in the garrison.

Once they deal with the guards, they march toward the inn and do not stop until they get there. The orcs destroy the main door and terrorize any customers in area 1. People in the inn comply and surrender their belongings to the orcs. A woman attempts to flee but one of the orcs stops her by thrusting her leg with a javelin. Her scream of pain can be heard anywhere in the inn. If the adventurers heard the orcs coming and prepared for their arrival, they may prevent any of these events.

The orc leader rides the giant hyena. The orcs have no formation and they attack whoever is closest unless they see a wizard or any kind of mage. In which case they all throw javelins at them at the first opportunity. The hyenas attack as a pack and bite the same target multiple times until it drops dead. Then, they attack another target and repeat the process until no foes remain. The orc leader and the giant hyena attack the toughest of the heroes.

If the adventurers are losing the battle and ask for mercy, the orcs stop and accept to spare any remaining lives as long as they can take anything they want, including the adventurers’ gear. If the truce is all a ruse, the orcs kill everyone before stealing and plundering the whole settlement.

Terrain. Green fields and fresh air surround the thorp. The road is busy and worn. Scores of people, horses, and caravans mark the road every day.

Smells and Sounds. Clock Tower is calm and quiet. Fine smells of roast beef and morning bread are common all season.

Treasure. Sir Volten learns about the adventures’ deeds after the commotion. He considers they have done a great favor to Clock Tower and the capital. He authorizes a payment of 250 gold pieces and a week’s stay free of charge at the traditional and historical inn of Clock Tower.