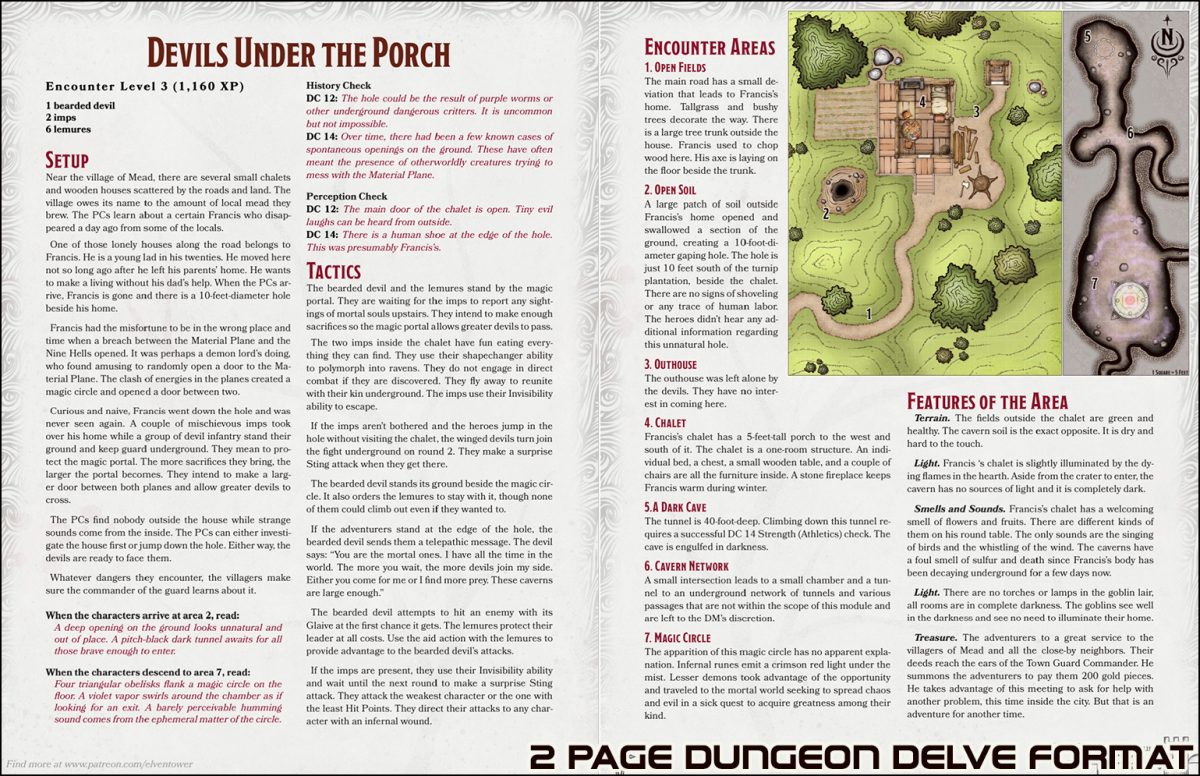 Near the village of Mead, there are several small chalets and wooden houses scattered by the roads and land. The village owes its name to the amount of local mead they brew. The PCs learn about a certain Francis who disappeared a day ago from some of the locals.

One of those lonely houses along the road belongs to Francis. He is a young lad in his twenties. He moved here not so long ago after he left his parents’ home. He wants to make a living without his dad’s help. When the PCs arrive, Francis is gone and there is a 10-feet-diameter hole beside his home.

Francis had the misfortune to be in the wrong place and time when a breach between the Material Plane and the Nine Hells opened. It was perhaps a demon lord’s doing, who found amusing to randomly open a door to the Material Plane. The clash of energies in the planes created a magic circle and opened a door between two.

Curious and naive, Francis went down the hole and was never seen again. A couple of mischievous imps took over his home while a group of devil infantry stand their ground and keep guard underground. They mean to protect the magic portal. The more sacrifices they bring, the larger the portal becomes. They intend to make a larger door between both planes and allow greater devils to cross.

The PCs find nobody outside the house while strange sounds come from the inside. The PCs can either investigate the house first or jump down the hole. Either way, the devils are ready to face them.

Whatever dangers they encounter, the villagers make sure the commander of the guard learns about it.

When the characters arrive at area 2, read:

A deep opening on the ground looks unnatural and out of place. A pitch-black dark tunnel awaits for all those brave enough to enter.

When the characters descend to area 7, read:

Four triangular obelisks flank a magic circle on the floor. A violet vapor swirls around the chamber as if looking for an exit. A barely perceivable humming sound comes from the ephemeral matter of the circle.

DC 12: The hole could be the result of purple worms or other underground dangerous critters. It is uncommon but not impossible.

DC 14: Over time, there had been a few known cases of spontaneous openings on the ground. These have often meant the presence of otherworldly creatures trying to mess with the Material Plane.

DC 12: The main door of the chalet is open. Tiny evil laughs can be heard from outside.

DC 14: There is a human shoe at the edge of the hole. This was presumably Francis’s.

The bearded devil and the lemures stand by the magic portal. They are waiting for the imps to report any sightings of mortal souls upstairs. They intend to make enough sacrifices so the magic portal allows greater devils to pass.

The two imps inside the chalet have fun eating everything they can find. They use their shapechanger ability to polymorph into ravens. They do not engage in direct combat if they are discovered. They fly away to reunite with their kin underground. The imps use their Invisibility ability to escape.

If the imps aren’t bothered and the heroes jump in the hole without visiting the chalet, the winged devils turn join the fight underground on round 2. They make a surprise Sting attack when they get there.

The bearded devil stands its ground beside the magic circle. It also orders the lemures to stay with it, though none of them could climb out even if they wanted to.

If the adventurers stand at the edge of the hole, the bearded devil sends them a telepathic message. The devil says: “You are the mortal ones. I have all the time in the world. The more you wait, the more devils join my side. Either you come for me or I find more prey. These caverns are large enough.”

The bearded devil attempts to hit an enemy with its Glaive at the first chance it gets. The lemures protect their leader at all costs. Use the aid action with the lemures to provide advantage to the bearded devil’s attacks.

If the imps are present, they use their Invisibility ability and wait until the next round to make a surprise Sting attack. They attack the weakest character or the one with the least Hit Points. They direct their attacks to any character with an infernal wound.

The main road has a small deviation that leads to Francis’s home. Tallgrass and bushy trees decorate the way. There is a large tree trunk outside the house. Francis used to chop wood here. His axe is laying on the floor beside the trunk.

A large patch of soil outside Francis’s home opened and swallowed a section of the ground, creating a 10-foot-diameter gaping hole. The hole is just 10 feet south of the turnip plantation, beside the chalet. There are no signs of shoveling or any trace of human labor. The heroes didn’t hear any additional information regarding this unnatural hole.

The outhouse was left alone by the devils. They have no interest in coming here.

Francis’s chalet has a 5-feet-tall porch to the west and south of it. The chalet is a one-room structure. An individual bed, a chest, a small wooden table, and a couple of chairs are all the furniture inside. A stone fireplace keeps Francis warm during winter.

The tunnel is 40-foot-deep. Climbing down this tunnel requires a successful DC 14 Strength (Athletics) check. The cave is engulfed in darkness.

A small intersection leads to a small chamber and a tunnel to an underground network of tunnels and various passages that are not within the scope of this module and are left to the DM’s discretion.

The apparition of this magic circle has no apparent explanation. Infernal runes emit a crimson red light under the mist. Lesser demons took advantage of the opportunity and traveled to the mortal world seeking to spread chaos and evil in a sick quest to acquire greatness among their kind.

Terrain. The fields outside the chalet are green and healthy. The cavern soil is the exact opposite. It is dry and hard to the touch.

Light. Francis ‘s chalet is slightly illuminated by the dying flames in the hearth. Aside from the crater to enter, the cavern has no sources of light and it is completely dark.

Smells and Sounds. Francis’s chalet has a welcoming smell of flowers and fruits. There are different kinds of them on his round table. The only sounds are the singing of birds and the whistling of the wind. The caverns have a foul smell of sulfur and death since Francis’s body has been decaying underground for a few days now.

Light. There are no torches or lamps in the goblin lair, all rooms are in complete darkness. The goblins see well in the darkness and see no need to illuminate their home.

Treasure. The adventurers to a great service to the villagers of Mead and all the close-by neighbors. Their deeds reach the ears of the Town Guard Commander. He summons the adventurers to pay them 200 gold pieces. He takes advantage of this meeting to ask for help with another problem, this time inside the city. But that is an adventure for another time. 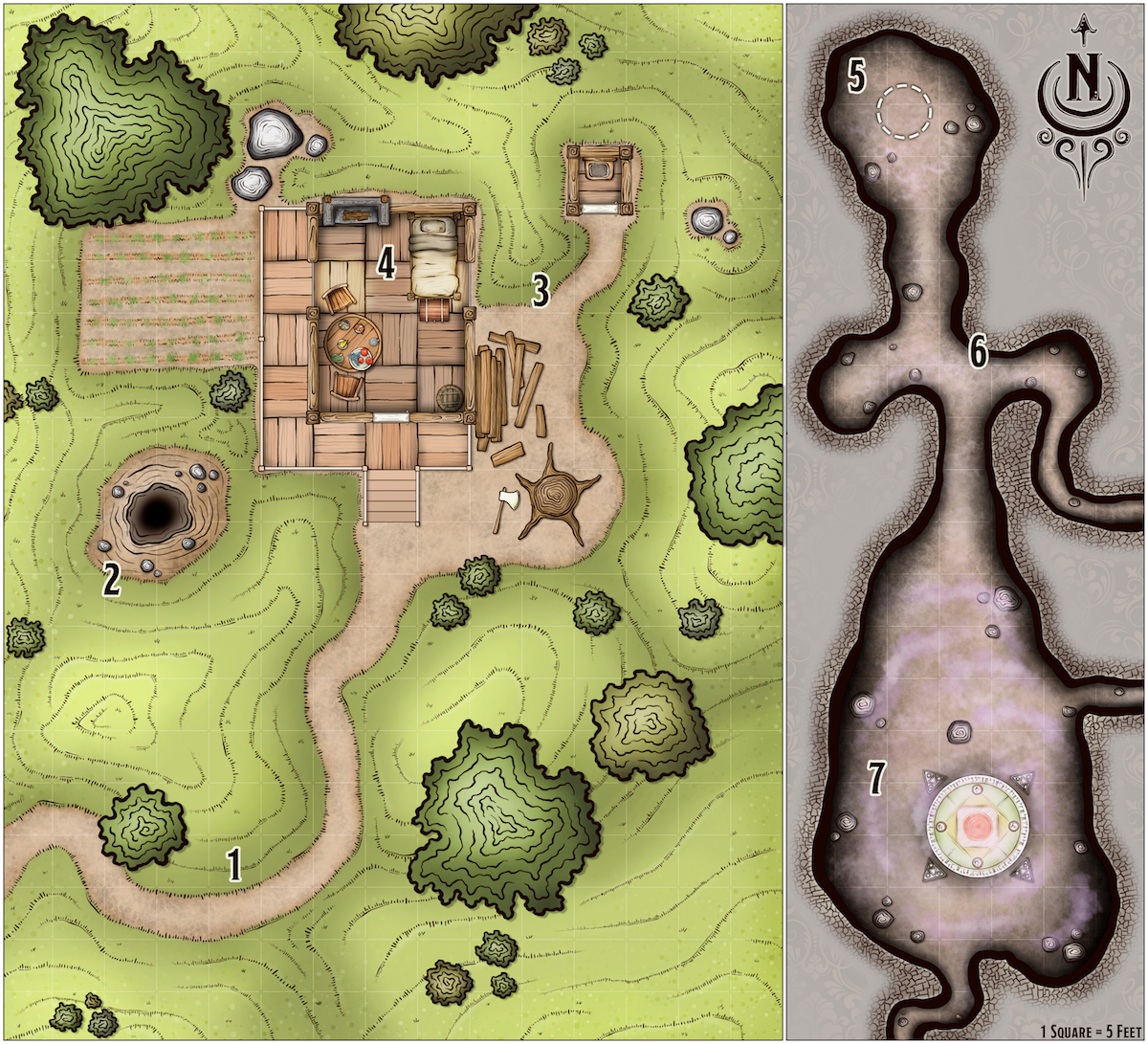