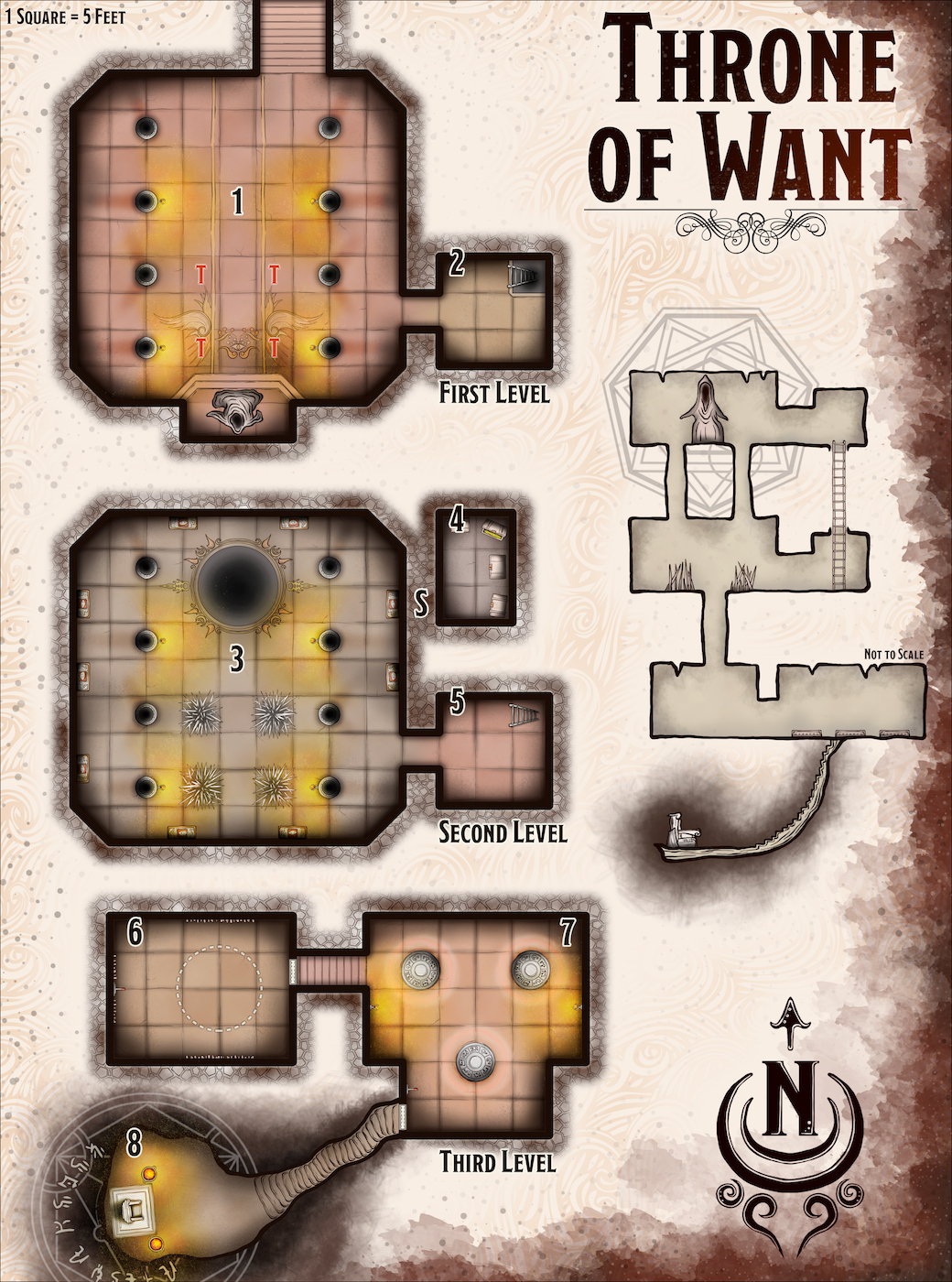 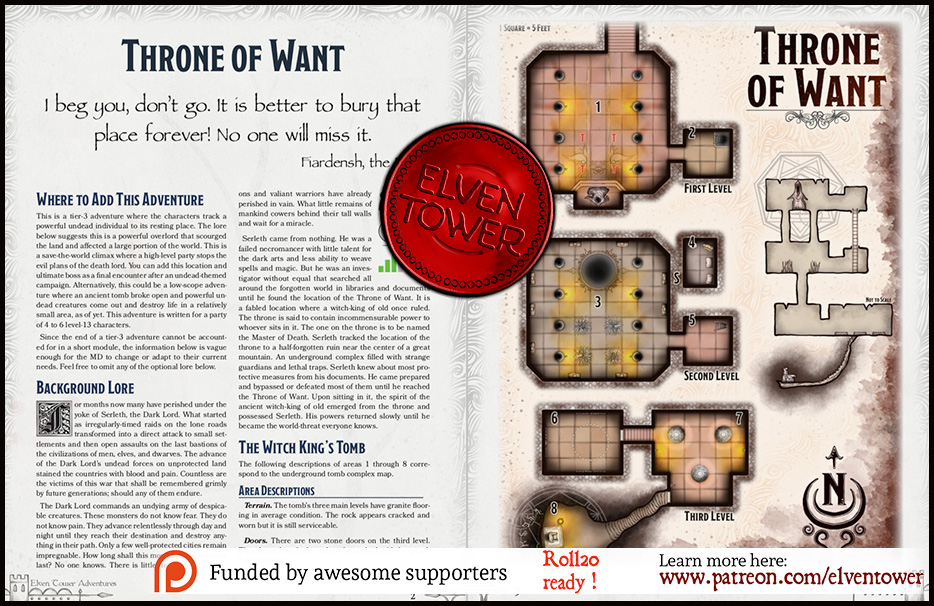 Where to Add This Adventure

This is a tier-3 adventure where the characters track a powerful undead individual to its resting place. The lore below suggests this is a powerful overlord that scourged the land and affected a large portion of the world. This is a save-the-world climax where a high-level party stops the evil plans of the death lord. You can add this location and ultimate boss as a final encounter after an undead-themed campaign. Alternatively, this could be a low-scope adventure where an ancient tomb broke open and powerful undead creatures come out and destroy life in a relatively small area, as of yet. This adventure is written for a party of 4 to 6 level-13 characters.

Since the end of a tier-3 adventure cannot be accounted for in a short module, the information below is vague enough for the MD to change or adapt to their current needs. Feel free to omit any of the optional lore below.

For months now many have perished under the yoke of Serleth, the Dark Lord. What started as irregularly-timed raids on the lone roads transformed into a direct attack to small settlements and then open assaults on the last bastions of the civilizations of men, elves, and dwarves. The advance of the Dark Lord’s undead forces on unprotected land stained the countries with blood and pain. Countless are the victims of this war that shall be remembered grimly by future generations; should any of them endure.

The Dark Lord commands an undying army of despicable creatures. These monsters do not know fear. They do not know pain. They advance relentlessly through day and night until they reach their destination and destroy anything in their path. Only a few well-protected cities remain impregnable. How long shall this moment of false safety last? No one knows. There is little hope. Most champions and valiant warriors have already perished in vain. What little remains of mankind cowers behind their tall walls and wait for a miracle.

Serleth came from nothing. He was a failed necromancer with little talent for the dark arts and less ability to weave spells and magic. But he was an investigator without equal that searched all around the forgotten world in libraries and documents until he found the location of the Throne of Want. It is a fabled location where a witch-king of old once ruled. The throne is said to contain incommensurable power to whoever sits in it. The one on the throne is to be named the Master of Death. Serleth tracked the location of the throne to a half-forgotten ruin near the center of a great mountain. An underground complex filled with strange guardians and lethal traps. Serleth knew about most protective measures from his documents. He came prepared and bypassed or defeated most of them until he reached the Throne of Want. Upon sitting in it, the spirit of the ancient witch-king of old emerged from the throne and possessed Serleth. His powers returned slowly until he became the world-threat everyone knows.

The following descriptions of areas 1 through 8 correspond to the underground tomb complex map.

Terrain. The tomb’s three main levels have granite flooring in average condition. The rock appears cracked and worn but it is still serviceable.

Doors. There are two stone doors on the third level. They do not have locks and can be pushed aside by spending an action.

Light. There are magical iron sconces with continual flame spells in several areas of the tomb. They provide bright light. Removing any of the sconces causes it to lose its magic after 1d6 minutes.

Guardians and Traps. The undead guardians of the tomb and any traps are a magical manifestation of the witch king’s power. Even if destroyed or disabled, any undead or trap reforms after a period of 4d6 hours.

Smells and Sounds. The whole complex smells of old dust and powdered bones. Its sepulchral silence is oppressive and unnerving.

A perilous journey through the mountain brings the adventures to the witch king’s tomb. The entrance hall is a large chamber with two rows of pillars and a large statue of the witch king at the far end. The statue depicts a hooded figure with a dagger and a staff in its hands. The face is not visible but two dots of red light shine from beneath the hood, like eyes.

Two wraiths and two specters emerge from the statue and attack any intruders. They attempt to bring them close to the pitfall trap squares (see below). The area is considered unhallowed ground; any attempt to turn undead fails.

Pitfall Trap. Four stone tiles open downward and may drop any creature standing on them to the metal spikes below in area 3. They are marked with a “T” on the map. A passive Perception score of 20 or higher reveals the outlines of the four tiles as a possible false floor. When a creature stands on any of the tiles, they must make a successful DC 18 Dexterity saving throw or fall to the spikes below. If a creature falls, it takes 35 (10d6) piercing damage. A creature that falls triggers the encounter in area 3 immediately.

The room contains nothing of importance except a hole on the ground with an iron ladder that descends 50 feet to area 5. The walls of this room are in exceptional condition, the DM may take advantage of this to include paintings, runes, or bas-reliefs or important lore bits that the adventurers may uncover before they venture further.

This chamber is similar in dimensions and the arrangement of the pillars to area 1. There are nine ornate stone sarcophagi by the walls of this chamber. The sarcophagi are engraved with runes in an ancient tongue that describe the person entombed in here, their deeds, and how they died. There are four spots with irregular arrangements of pointy spikes near the south wall of the room. Any creature that falls through the pitfall traps in area 1 is impaled in the correspondent spikes. When any creature enters the chamber from area 5 or by falling through a pitfall trap, four wraiths and five shadows emerge from the sarcophagi and attack.

There is a large 10-feet-wide circular opening on the floor near the north wall that descends 50 feet to area 6. There are no ladders, manholes, or an apparent way to descend.

Secret Door. A passive Perception score of 16 or higher reveals the irregular outline of a section of the wall that hides a secret passage. The sarcophagus near it features a false bottom that moves aside to reveal a secret passage to area 4.

Four identical stone chests have withstood the passage of time in this room. They contain 2500 pp, 3420 gp, and a little more in lower coinage. A staff of the magi leans against one of the chests. A +2 mithral chain shirt is tucked at the bottom of one of the chests.

The room contains nothing of importance except an iron ladder that ascends 50 feet to area 2. The walls of this room are a good state of preservation, the DM may take advantage of this to include paintings, runes, or bas-reliefs or important lore bits that the adventurers may uncover before they venture further.

The north, south, and west walls of this room are lined with several rows of two-inch-wide circular openings that shoot poison darts when the trap is activated (see below). The stone door by the east wall is engraved with the image of a large throne where a dark figure sits. The throne radiates what appears to be a kind of light or energy.

Poison Dart Trap. The four tiles directly below the opening in area 3 are a large pressure plate. Applying forty pounds or more to the plate triggers scores of poison darts to shoot from three different walls. The pressure plate is accurate enough that it causes a new barrage of darts when a new creature steps on it, possibly targeting several creatures as they descend. This trap has a seemingly unending supply of darts. A passive Perception score of 20 or higher reveals the outline of the pressure plate but its purpose remains unknown until a creature descends and sees the shooting holes on the walls. When a creature stands on any of the tiles, they must make a DC 18 Dexterity saving throw, taking 42 (12d6) poison damage on a failed save, or half as much damage on a successful one.

The bodily remains of the Witch King and some of his most loyal subjects are spread in equal amounts amongst three shallow circular niches. They are closed shut with mortar and stone. A powerful glow emerges from the three stone circles on the floor. Like a dense mist that floats around each of them and exchanges matter from time to time with the others.

Serleth, the Dark Lord (death knight) is in the room waiting for the intruders, by the south wall. He is accompanied by his two bodyguards (wraiths), and three wretched souls (shadows). The area is considered unhallowed ground; any attempt to turn undead fails. Serleth begins the battle by hurling a Hellfire Orb at the back wall, trying to target as many of the characters as possible. Defeating Serleth causes any other undead in the room to be destroyed too.

8. The Throne of Want

The throne is located on what appears to be a floating stone platform after a short flight of stone stairs. The area has no walls, it floats in an abyss of darkness and oppressive silence. Meditating in this place for a prolonged period opens a new layer of perception in anyone that attempts it. After 3d6 days of meditation, the person acquires a rare gift that allows them to see into the void and distinguish shapes and images from the world of the dead. The character can now see invisible undead creatures as if they were in plain sight.

Destroying Serleth causes the spirit of the Witch King to enter a dormant state for 1 year. During this period, the true power of the throne is inactive. After this period of dormancy, a new person can sit on the Throne of Want and receive the power of the ancient Witch King. Serleth was weak enough that the spirit overtook him completely but a strong soul may be able to absorb the power without relinquishing control to the angry phantom of the past.

Whether a new person takes this position or a member of the adventuring party tries their luck with the Witch King’s throne, is an adventure for another time. These future possibilities are not within the scope of this adventure and left to the DM’s discretion.