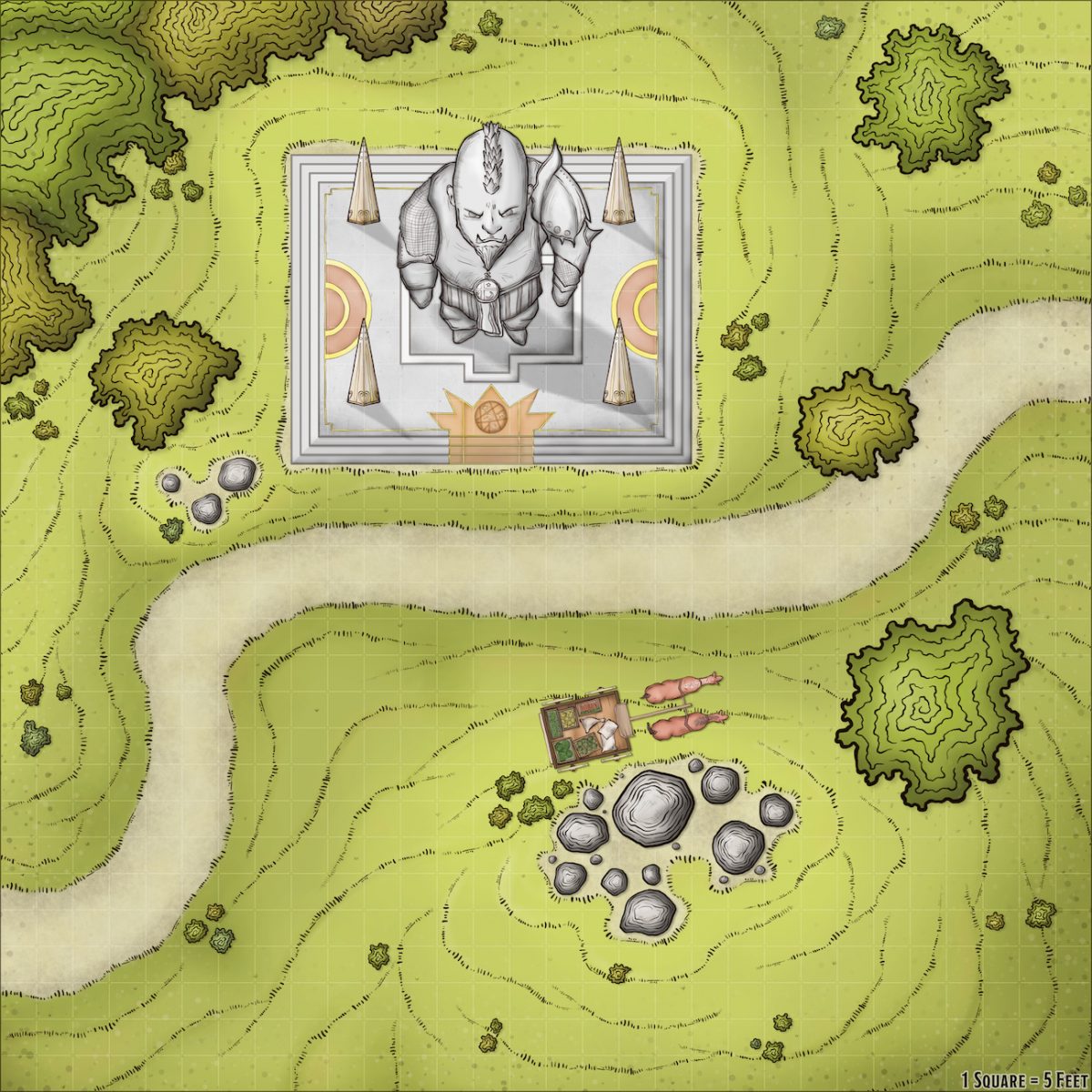 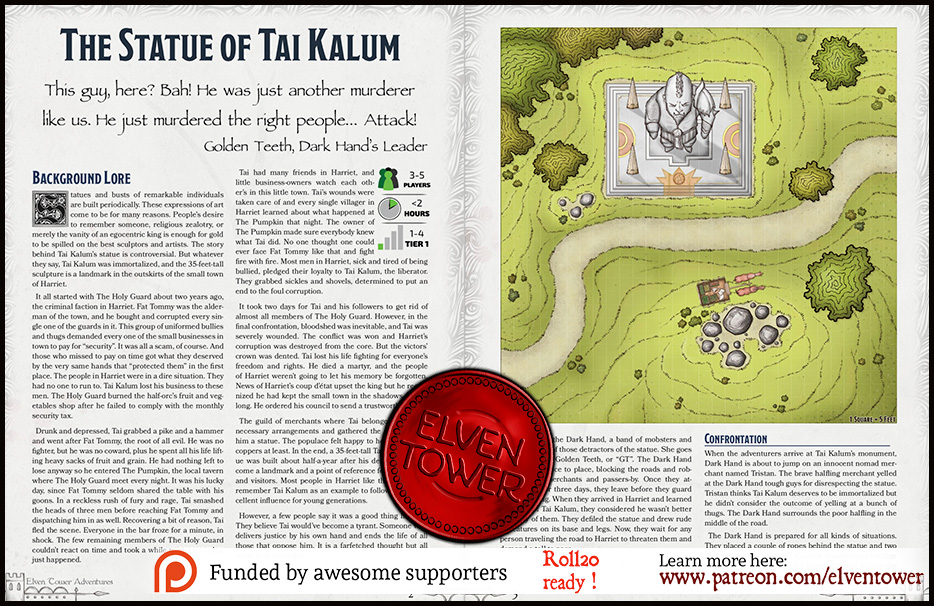 Statues and busts of remarkable individuals are built periodically. These expressions of art come to be for many reasons. People’s desire to remember someone, religious zealotry, or merely the vanity of an egocentric king is enough for gold to be spilled on the best sculptors and artists. The story behind Tai Kalum’s statue is controversial. But whatever they say, Tai Kalum was immortalized, and the 35-feet-tall sculpture is a landmark in the outskirts of the small town of Harriet.

It all started with The Holy Guard about two years ago, the criminal faction in Harriet. Fat Tommy was the alderman of the town, and he bought and corrupted every single one of the guards in it. This group of uniformed bullies and thugs demanded every one of the small businesses in town to pay for “security”. It was all a scam, of course. And those who missed paying on time got what they deserved by the very same hands that “protected them” in the first place. The people in Harriet were in a dire situation. They had no one to run to. Tai Kalum lost his business to these men. The Holy Guard burned the half-orc’s fruit and vegetables shop after he failed to comply with the monthly security tax.

Drunk and depressed, Tai grabbed a pike and a hammer and went after Fat Tommy, the root of all evil. He was no fighter, but he was no coward, plus he spent all his life lifting heavy sacks of fruit and grain. He had nothing left to lose anyway so he entered The Pumpkin, the local tavern where The Holy Guard meet every night. It was his lucky day since Fat Tommy seldom shared the table with his goons. In a reckless rush of fury and rage, Tai smashed the heads of three men before reaching Fat Tommy and dispatching him in as well. Recovering a bit of reason, Tai fled the scene. Everyone in the bar froze for a minute, in shock. The few remaining members of The Holy Guard couldn’t react on time and took a while to process what just happened.

Tai had many friends in Harriet, and little business-owners watch each other’s in this little town. Tai’s wounds were taken care of and every single villager in Harriet learned about what happened at The Pumpkin that night. The owner of The Pumpkin made sure everybody knew what Tai did. No one thought one could ever face Fat Tommy like that and fight fire with fire. Most men in Harriet, sick and tired of being bullied, pledged their loyalty to Tai Kalum, the liberator. They grabbed sickles and shovels, determined to put an end to the foul corruption.

It took two days for Tai and his followers to get rid of almost all members of The Holy Guard. However, in the final confrontation, bloodshed was inevitable, and Tai was severely wounded. The conflict was won and Harriet’s corruption was destroyed from the core. But the victors’ crown was dented. Tai lost his life fighting for everyone’s freedom and rights. He died a martyr, and the people of Harriet weren’t going to let his memory be forgotten. News of Harriet’s coup d’état upset the king but he recognized he had kept the small town in the shadows for too long. He ordered his council to send a trustworthy leader.

The guild of merchants where Tai belonged made the necessary arrangements and gathered the gold to build him a statue. The populace felt happy to help with a few coppers at least. In the end, a 35-feet-tall Tai Kalum’s statue was built about half-a-year after his death. It has become a landmark and a point of reference for all travelers and visitors. Most people in Harriet like the statue and remember Tai Kalum as an example to follow and an excellent influence for young generations.

However, a few people say it was a good thing he died. They believe Tai would’ve become a tyrant. Someone who delivers justice by his own hand and ends the life of all those that oppose him. It is a farfetched thought but all coins have two sides.

The leader of the Dark Hand, a band of mobsters and ruffians, is one of those detractors of the statue. She goes by the name of Golden Teeth, or “GT”. The Dark Hand travels from place to place, blocking the roads and robbing nomad merchants and passers-by. Once they attack for two or three days, they leave before the guard comes looking. When they arrived in Harriet and learned the story of Tai Kalum, they considered he wasn’t better than any of them. They defiled the statue and drew rude caricatures on its base and legs. Now, they wait for any person traveling the road to Harriet to threaten them and demand a toll to pass.

When the adventurers arrive at Tai Kalum’s monument, Dark Hand is about to jump on an innocent nomad merchant named Tristan. The brave halfling merchant yelled at the Dark Hand tough guys for disrespecting the statue. Tristan thinks Tai Kalum deserves to be immortalized but he didn’t consider the outcome of yelling at a bunch of thugs. The Dark Hand surrounds the poor halfling in the middle of the road.

The Dark Hand is prepared for all kinds of situations. They placed a couple of ropes behind the statue and two of their men stand in Tai Kalum’s shoulders as vantage points to shoot arrows. If the heroes attempt to stop the Dark Hand, Golden Teeth stops her men and asks the adventurers to pay for two things. She says: “The Dark Hand charges 15 silver pieces per head to pass. And since you want to play hero today, I ask 50 gold pieces for the halfling merchant’s life.” Even if the adventurers pay what she asks, it is all a ruse. The Dark Hand has orders to attack everyone even after they have paid.

Despite her short stature, Golden Teeth is fierce and strong. She brandishes a large war hammer with ease. Her followers stay with her out of a mix of respect and fear. Those who wish to leave the Dark Hand decide it is better to stay after G.T. persuades them of the contrary. She wears her long brown hair in thick braids. Her clothes have a purple tint to them. She wears a black leather glove on her left hand, as do all the members of her group.

Personality Trait. “If you injure me, I will crush you, ruin your name, and salt your fields.”

Ideal. “I will do whatever it takes to become wealthy.”

Bond. “I will do anything to protect the members of my clan.”

Tristan has a big heart but a small brain. He is an idealist and the fact that he is still alive is surprising. His big mouth has gotten him in very complicated situations but there has always been a friendly soul to help him out. Tristan’s business are vegetables. He sells cabbages, lettuces, carrots, and some corn grains. He has two friendly mules named Bleep and Bloop.

Ideal. “The world can improve with my take on it.”

Bond. “I protect everything I consider to be right for the world.”

Flaw. “I speak without really thinking through my words, invariably insulting others.”

The following descriptions correspond to the area shown in Tai Kalum’s statue map.

Terrain. The road zigzags in the middle of a long green field. The long waves of grass and smaller trees move with the wind. Tristan’s wagon is stationed 10 feet south from the road.

Tai Kalum’s Statue. Four obelisks with pretty patterns adorn each corner of the rectangular base. On its center, a 35-feet-tall stone representation of Kai Talum stares directly to the road. The lowest sections of the statue’s legs are all painted and drawn on.

Light. It is about noon when the adventurers find The Dark Hand threatening Tristan. All the area is illuminated with daylight.

Smells and Sounds. Tristan’s calls for help are heard as far as a hundred feet away. The Dark Hand’s members aren’t the emblem of hygiene and neatness so a strong odor of sweat accompanies them wherever they go.

Golden Teeth (bandit leader) orders her men to attack the adventurers regardless of their compliance to pay or not. The Dark Hand has two scouts placed on the statue’s shoulders and G.T. is protected by two thugs and four bandits. If Golden Teeth drop to 0 Hit Points in combat, any remaining members of the Dark Hand drop their weapons and beg for mercy.

The adventurers can recover any gold they paid to the Dark Hand after defeating them. Additionally, the brigands deliver all the stuff they have stolen for the last few days. All this can be taken to Harriet since most of it belongs to those who traveled the same road in the last 48 hours.

Treasure. Without counting any of Harriet villagers’ belongings, the bandits have a total of 332 gold pieces among all of them. The treasure also includes a couple of books, an ornamental handaxe, a chain shirt in excellent quality, a worker’s toolkit, two pairs of glasses, and a wheel of cheese. If the adventurers decide to keep everything, add 102 gold pieces to their bounty. 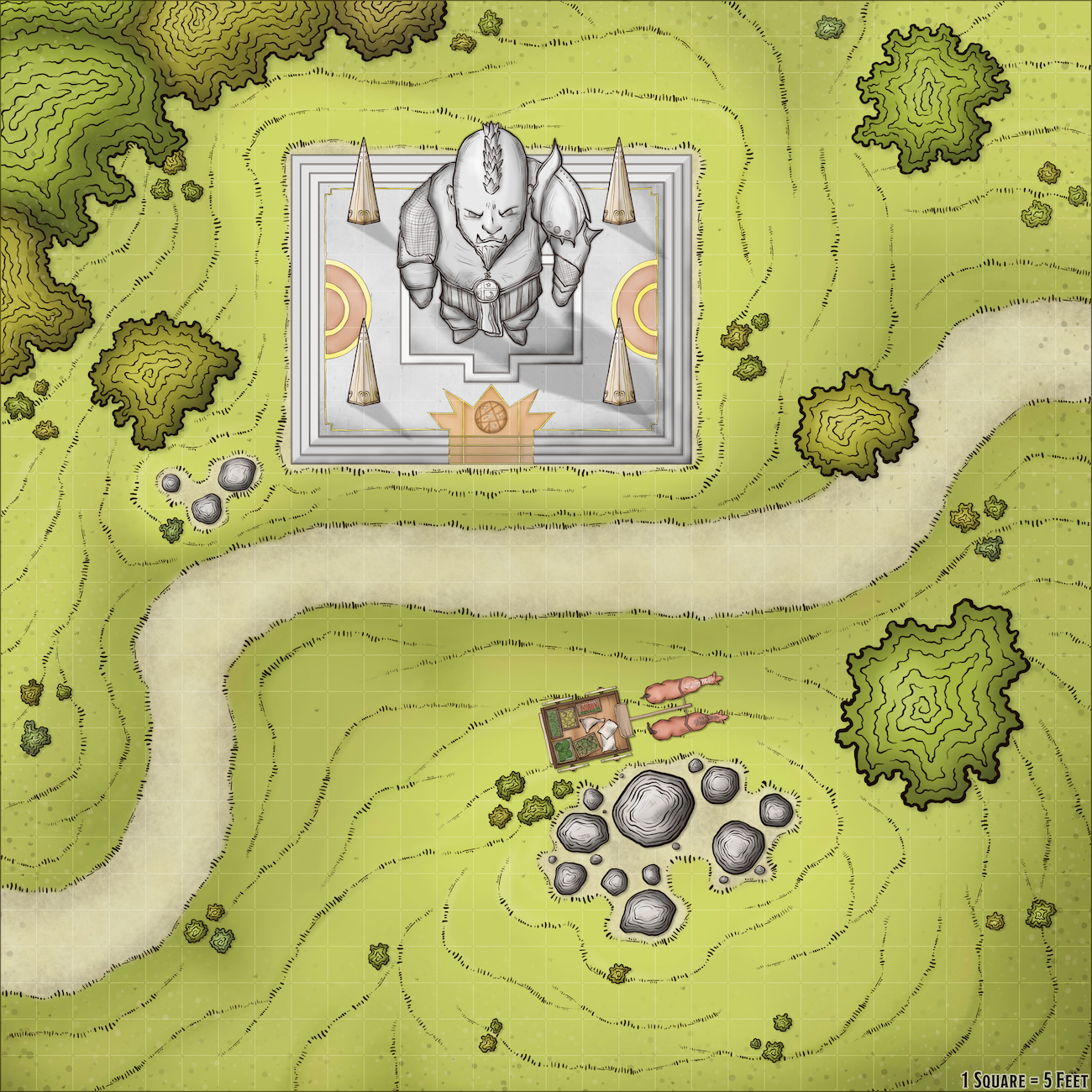