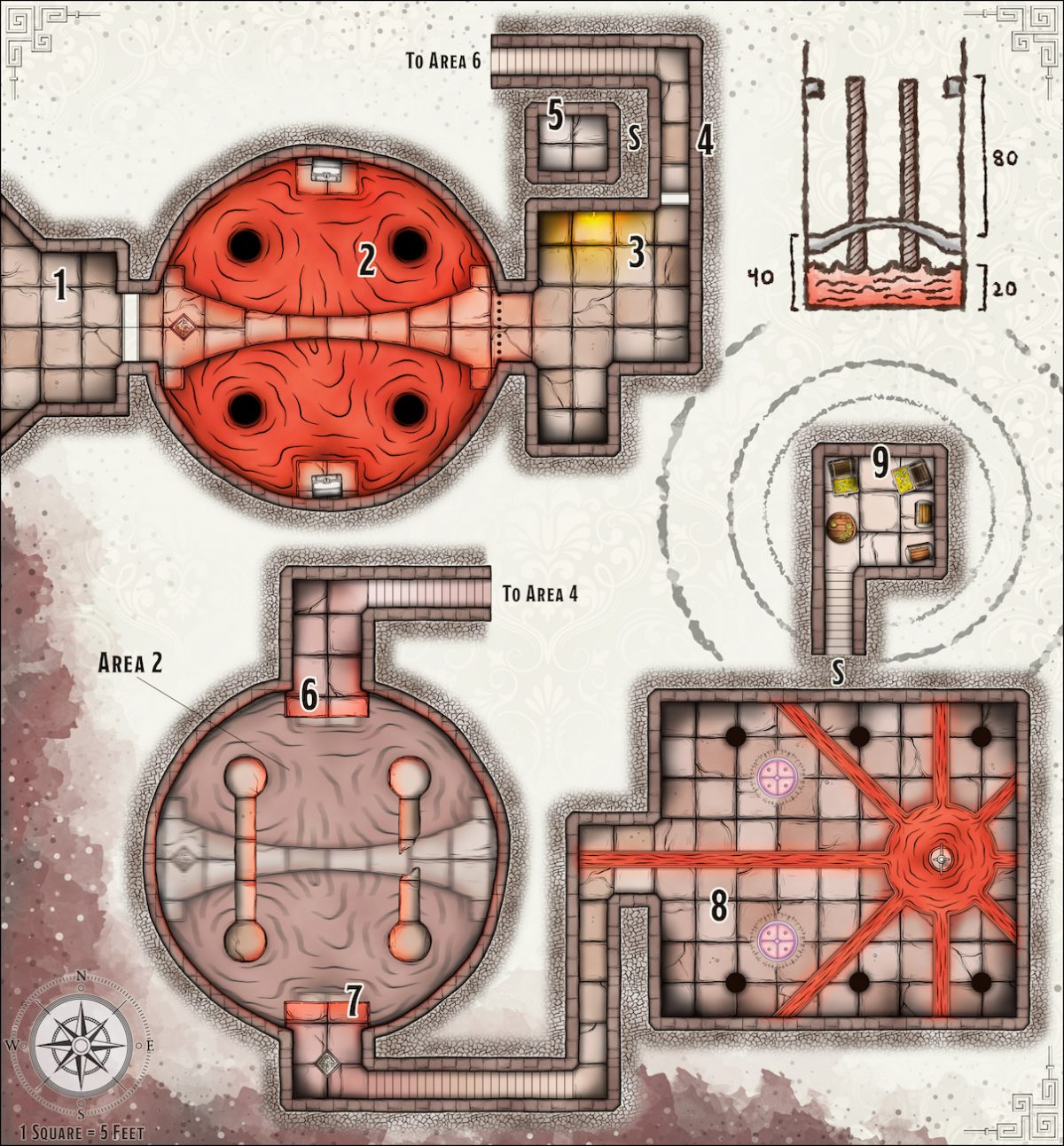 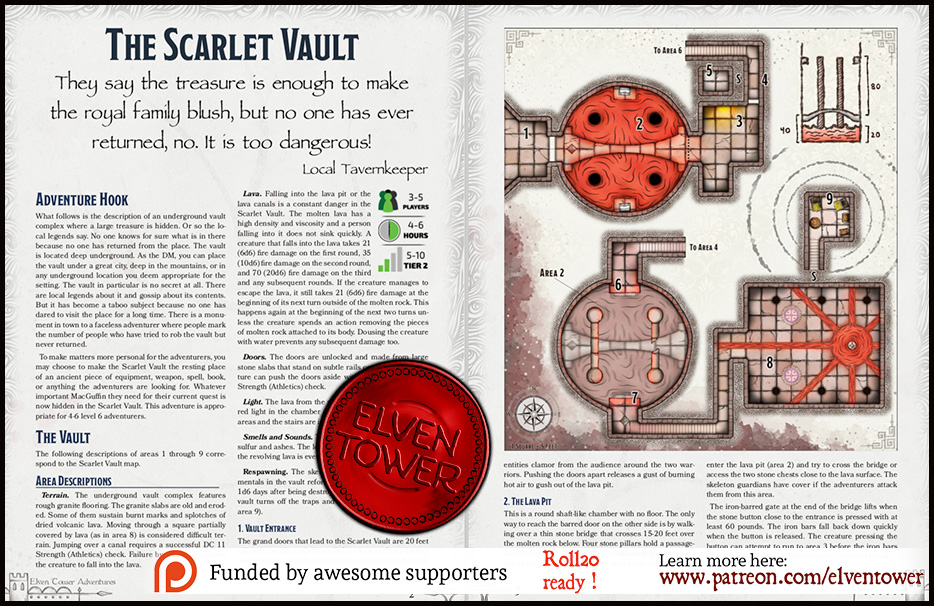 What follows is the description of an underground vault complex where a large treasure is hidden. Or so the local legends say. No one knows for sure what is in there because no one has returned from the place. The vault is located deep underground. As the DM, you can place the vault under a great city, deep in the mountains, or in any underground location you deem appropriate for the setting. The vault in particular is no secret at all. There are local legends about it and gossip about its contents. But it has become a taboo subject because no one has dared to visit the place for a long time. There is a monument in town to a faceless adventurer where people mark the number of people who have tried to rob the vault but never returned.

The following descriptions of areas 1 through 9 correspond to the Scarlet Vault map.

Terrain. The underground vault complex features rough granite flooring. The granite slabs are old and eroded. Some of them sustain burnt marks and splotches of dried volcanic lava. Moving through a square partially covered by lava (as in area 8) is considered difficult terrain. Jumping over a canal requires a successful DC 11 Strength (Athletics) check. Failure by 5 or more causes the creature to fall into the lava.

Doors. The doors are unlocked and made from large stone slabs that stand on subtle rails on the floor. A creature can push the doors aside with a successful DC 13 Strength (Athletics) check.

Light. The lava from the main chamber provides bright red light in the chamber and any adjacent rooms. Other areas and the stairs are in complete darkness.

Smells and Sounds. The whole complex has a smell of sulfur and ashes. The low-pitched grumbling sound from the revolving lava is ever-present in the vault.

Respawning. The skeletal guardians and the fire elementals in the vault reform and return to their positions 1d6 days after being destroyed. A switch inside the main vault turns off the traps and respawning measures (see area 9).

The grand doors that lead to the Scarlet Vault are 20 feet tall. An expertly made bas-relief on their surfaces depicts two pit fiends on a bloody battle arena. Scores of demonic entities clamor from the audience around the two warriors. Pushing the doors apart releases a gust of burning hot air to gush out of the lava pit.

This is a round shaft-like chamber with no floor. The only way to reach the barred door on the other side is by walking over a thin stone bridge that crosses 15-20 feet over the molten rock below. Four stone pillars hold a passageway 80 feet above. There are four skeleton guardians on top of the pillars (area 6). They attack any creatures that enter the lava pit (area 2) and try to cross the bridge or access the two stone chests close to the lava surface. The skeleton guardians have cover if the adventurers attack them from this area.

The iron-barred gate at the end of the bridge lifts when the stone button close to the entrance is pressed with at least 60 pounds. The iron bars fall back down quickly when the button is released. The creature pressing the button can attempt to run to area 3 before the iron bars fall with a successful DC 20 Strength (Athletics) check.

Trapped Chest. The north chest is empty; it is a trap. If a creature opens the chest lid, a gust of wind emerges from inside. The creature must make a successful DC 14 (Strength or Dexterity) saving throw to avoid falling into the lava pit. The trap resets magically after 1d4 hours.

Treasure. The south chest contains a leather pouch with 200 gp, a strange belt with a pewter buckle (70gp), an ornate soapstone vase, in poor condition (25gp), and an ornamental silver figurine of a beholder, set with a jasper (95gp).

This is a seemingly empty room. The only thing of notice is an iron torch on a sconce on the north wall, next to the stone door. The torch is interestingly placed in a room that requires no light sources because of its proximity to the lava pit. A passive Perception score of 15 or higher reveals that the sconce is a lever. A creature can determine that pulling the lever causes several orifices on the ceiling to open with a DC 16 Intelligence (Investigation) check. The purpose of this remains unclear.

If a creature pulls the lever, a dozen orifices on the ceiling open and release streams of liquid lava on the 20 by 20 section of the room (the 10 by 10 south alcove is safe). Any creature in the area must make a DC 15 Dexterity saving throw, taking 21 (6d6) fire damage on a failed save, or half as much damage on a successful one.

This is a pitch-black hallway that turns west into a stairway that ascends 80 feet to area 6. The walls in the stairs section are decorated with one-inch-diameter pieces of stained glass of different colors that form a grand mural that extends throughout the stairs. It is difficult to make out the image because of the proximity but it portrays a pit fiend demon sitting on a throne of bones. Thousands of smaller demons bow before it as a sign of fear and respect.

Secret Door. A passive Perception of 14 or higher reveals the outline of a secret door on the west wall before the stairs. Pushing an adjacent brick causes a section of the wall to move aside and reveal a secret passage to area 5.

This room is a decoy vault designed to confuse and harm any visitors. There are two skeletons on the floor of this room. The bones have burnt marks on them. The west wall of the fake vault features a bas-relief of a grinning demon.

Firejets Trap. The floor of this chamber is a pressure plate that triggers a firebolt trap when at least 40 pounds of weight is applied to it. When the trap is triggered, holes on the floor open and release excess heat from the lava below in the form of fiery jets. Any creature in the chamber and the secret passage must make a DC 16 Dexterity saving throw, taking 21 (6d6) fire damage on a failed save, or half as much damage on a successful one.

The north balcony overlooks the lava pit. The top of the four pillars form platforms where four skeleton guardians stand with their bows ready (unless they have already been defeated from area 2). Slim rock passages join the north and south platforms.

The south balcony overlooks the lava pit. A skeleton guardian hides by the stairs, waiting for the perfect moment to push the button near the balcony. Pushing the button causes the four pillars and the passageways to collapse into the lava pit below. The guardian waits until at least two adventurers are over the collapsible structures. When the pillars collapse, any creatures on them must make a successful DC 15 dexterity saving throw to fall on the bridge or the stone chests 80 ft. below, in area 2. Falling this way still causes 24 (7d6) bludgeoning damage. Otherwise, they fall into the lava pit and take both the falling damage and the lava damage.

The pillars are a magical trap that resets at dawn. The pillars remerge from the lava and the passageways reform.

A magical fountain and pond next to the east wall dominate the room. The fountain is an arcane device that heats the rock and keeps it in liquid lava form. The lava flows from the pond in two-feet-wide canals that feed the main lava pit and the other contraptions in the complex. When any creature enters this chamber, the two magical circles on the floor activate and summon two fire elementals. There are two skeleton guardians by the easternmost pillars. They shoot their arrows from behind the lava canals.

Secret Door. A successful DC 17 Intelligence (Investigation) check reveals the outline of a secret door on the north wall, behind a pillar. Pushing an adjacent brick causes a section of the wall to move aside and reveal a secret passage to area 9.

A short 10-feet-long flight of stairs leads up to the main vault. There are several wooden chests, a wooden table, and a few metal shelves on the walls. There are all kinds of valuable objects and coins in the chests and shelves.

A large metal lever on the north wall is in the “up” position. Pulling the lever down deactivates the lava fountain in area 8, turns off all traps in the underground complex, and destroys any remaining guardians in the vault. This also stops the respawning magic for the guardians. The lava remains in liquid form for at least 1d6 hours after turning off the fountain. Returning the lever to the “up” position reactivates the vault entirely but it gives the user a window of 30 minutes before it all returns to normal.

Treasure. The vault contains the following: 2200 gp, 3400 sp, 1800 cp, and three diamonds (300 gp each). An engraved belt with a marble buckle (80gp), a sturdy belt with a silver buckle (60gp), a strange ceramic figurine of a thief, set with blue quartz (60gp), an antique granite figurine of a skeleton (60gp), a strange pewter vase, inlaid with maple wood (110gp), a sturdy dragonbone plate, inlaid with mithral (450gp), a marble framed painting of a fish (150gp), and an engraved pewter vase decorated with a moonstone (125gp). One of the shelves holds a +2 longsword, a +1 chain shirt, and a spell scroll of greater restoration. 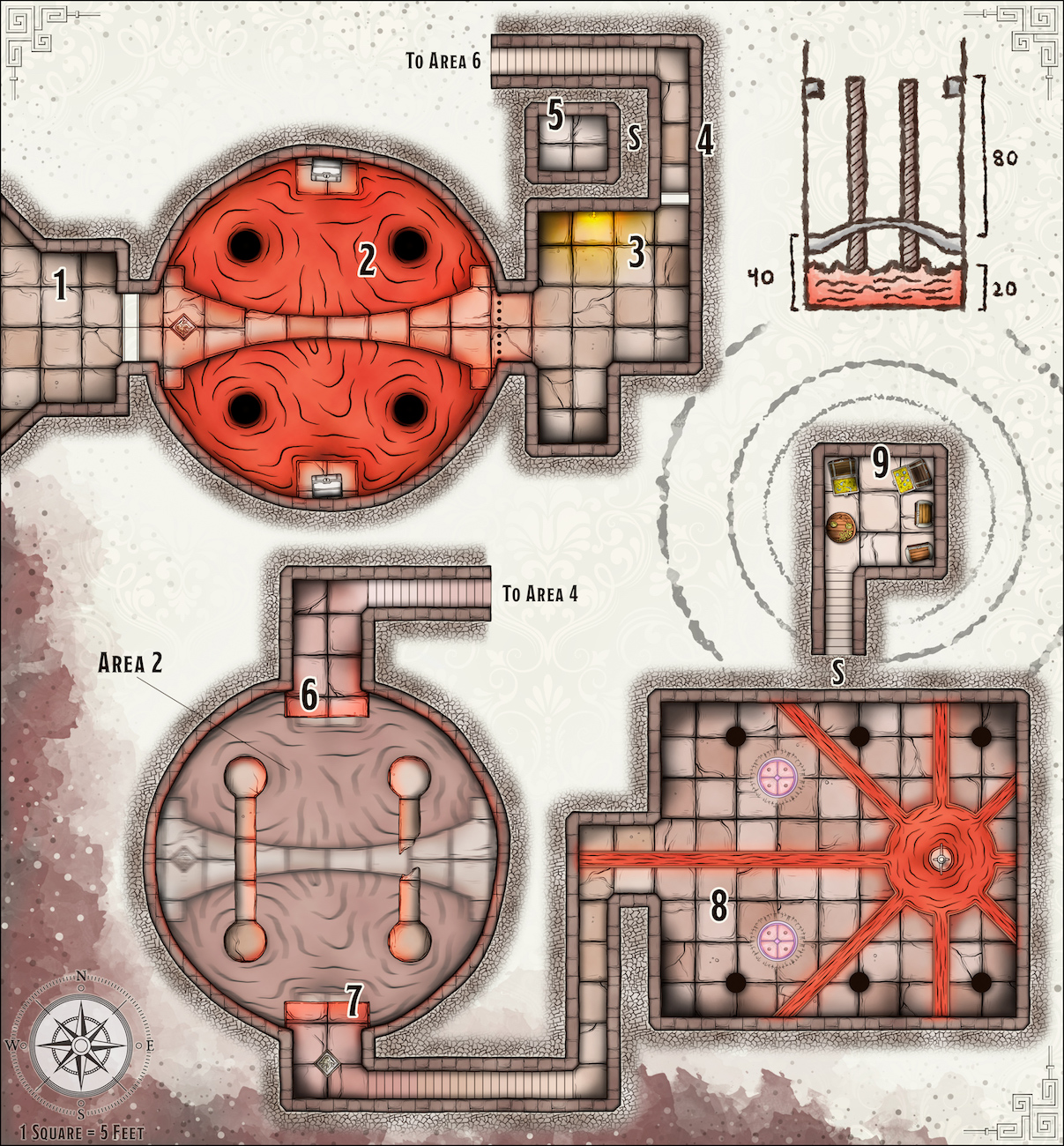