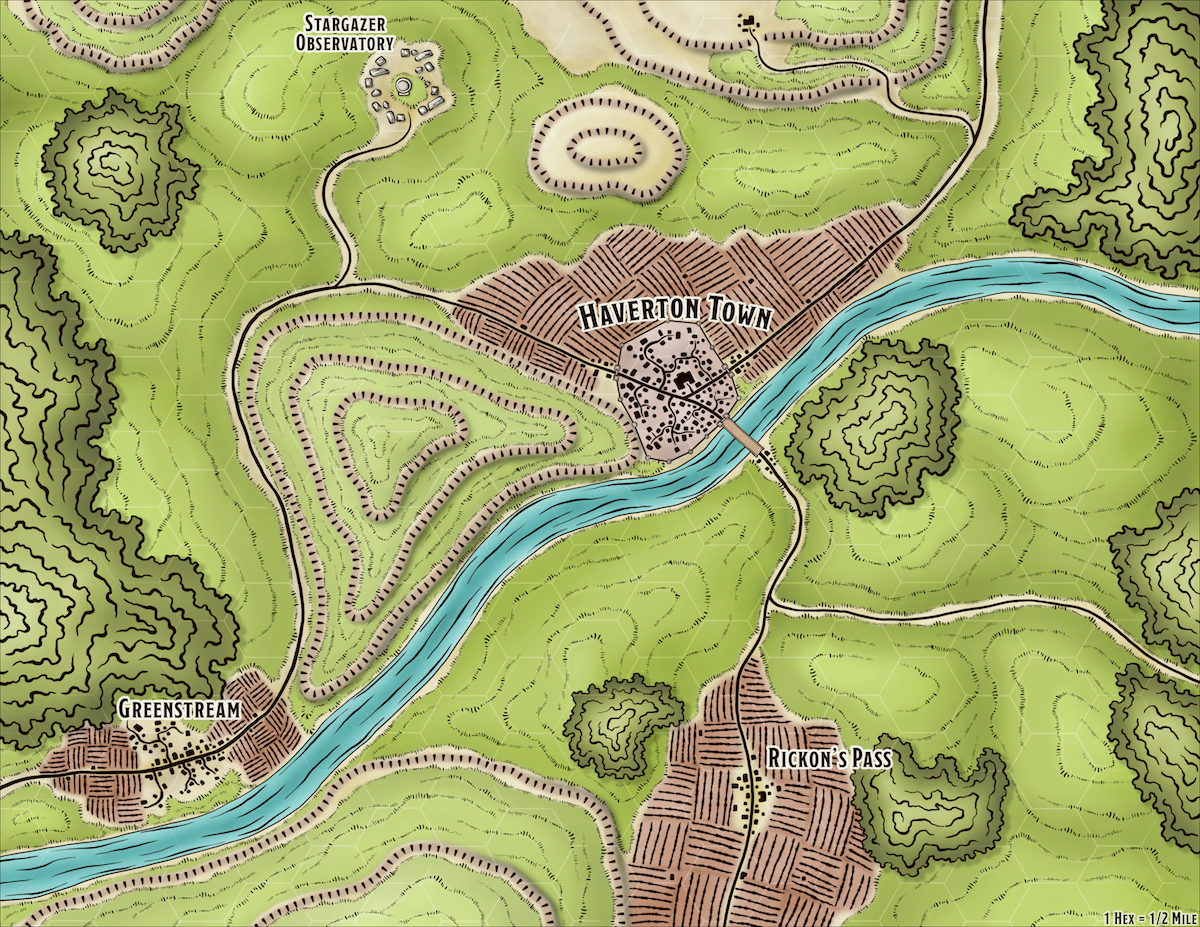 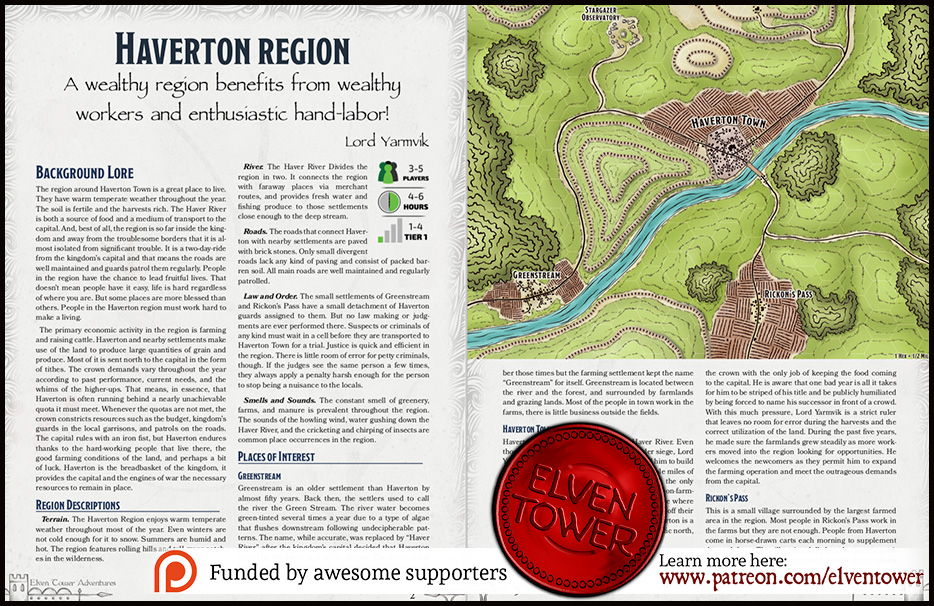 The region around Haverton Town is a great place to live. They have warm temperate weather throughout the year. The soil is fertile and the harvests rich. The Haver River is both a source of food and a medium of transport to the capital. And, best of all, the region is so far inside the kingdom and away from the troublesome borders that it is almost isolated from significant trouble. It is a two-day-ride from the kingdom’s capital and that means the roads are well maintained and guards patrol them regularly. People in the region have the chance to lead fruitful lives. That doesn’t mean people have it easy, life is hard regardless of where you are. But some places are more blessed than others. People in the Haverton region must work hard to make a living.

The primary economic activity in the region is farming and raising cattle. Haverton and nearby settlements make use of the land to produce large quantities of grain and produce. Most of it is sent north to the capital in the form of tithes. The crown demands vary throughout the year according to past performance, current needs, and the whims of the higher-ups. That means, in essence, that Haverton is often running behind a nearly unachievable quota it must meet. Whenever the quotas are not met, the crown constricts resources such as the budget, kingdom’s guards in the local garrisons, and patrols on the roads. The capital rules with an iron fist, but Haverton endures thanks to the hard-working people that live there, the good farming conditions of the land, and perhaps a bit of luck. Haverton is the breadbasket of the kingdom, it provides the capital and the engines of war the necessary resources to remain in place.

Terrain. The Haverton Region enjoys warm temperate weather throughout most of the year. Even winters are not cold enough for it to snow. Summers are humid and hot. The region features rolling hills and tall grass patches in the wilderness.

River. The Haver River Divides the region in two. It connects the region with faraway places via merchant routes and provides freshwater and fishing produce to those settlements close enough to the deep stream.

Roads. The roads that connect Haverton with nearby settlements are paved with brick stones. Only small divergent roads lack any kind of paving and consist of packed barren soil. All main roads are well maintained and regularly patrolled.

Law and Order. The small settlements of Greenstream and Rickon’s Pass have a small detachment of Haverton guards assigned to them. But no lawmaking or judgments are ever performed there. Suspects or criminals of any kind must wait in a cell before they are transported to Haverton Town for a trial. Justice is quick and efficient in the region. There is little room of error for petty criminals, though. If the judges see the same person a few times, they always apply a penalty harsh enough for the person to stop being a nuisance to the locals.

Smells and Sounds. The constant smell of greenery, farms, and manure is prevalent throughout the region. The sounds of the howling wind, water gushing down the Haver River, and the cricketing and chirping of insects are commonplace occurrences in the region.

Greenstream is an older settlement than Haverton by almost fifty years. Back then, the settlers used to call the river the Green Stream. The river water becomes green-tinted several times a year due to a type of algae that flushes downstream following undecipherable patterns. The name, while accurate, was replaced by “Haver River” after the kingdom’s capital decided that Haverton would be the lord’s seat in the region. The name faded from existence and now only a few old individuals remember those times but the farming settlement kept the name Greenstream for itself. Greenstream is located between the river and the forest, and surrounded by farmlands and grazing lands. Most of the people in town work in the farms, there is little business outside the fields.

Haverton is a large town next to the Haver River. It is surrounded by a 20-feet-tall stone wall. Even though Haverton Town has never been under siege, Lord Yarmvik had to comply when the crown asked him to build a wall around it. Beyond the town walls, a couple of miles of farmlands encircle the settlement. Haverton is the only place in the region where an abundance of non-farming jobs exists. The Great Market is a busy place where scores of vendors and traveling merchants show off their wares in an attempt to make a coin or two. Haverton is a bustling town that benefits from the constant traffic north, toward the kingdom’s capital.

The ruler of the town and the region, in general, is Lord Yarmvik. Despite his title, he is a low-level employee of the crown with the only job of keeping the food coming to the capital. He is aware that one bad year is all it takes for him to be stripped of his title and be publicly humiliated by being forced to name his successor in front of a crowd. With this much pressure, Lord Yarmvik is a strict ruler that leaves no room for error during the harvests and the correct utilization of the land. During the past five years, he made sure the farmlands grew steadily as more workers moved into the region looking for opportunities. He welcomes the newcomers as they permit him to expand the farming operation and meet the outrageous demands from the capital.

This is a small village surrounded by the largest farmed area in the region. Most people in Rickon’s Pass work in the farms but they are not enough. People from Haverton come in horse-drawn carts each morning to supplement the workforce. The village is a dull place that grew organically on either side of the main road. A third of the region’s production comes from Rickon’s Pass. When the harvest comes, scores of carts come from Haverton to pick up the produce and bring it to the large silos in Haverton or straight to the capital.

A narrow and disused path leads from the main road to a strange ruined monument on the north side of the region. The ruins are thousands of years old and there is no knowledge about who built them. Their original purpose has been deduced from carvings on the stones and the not-so-obvious alignment of the rocks with the stars. This information was discovered by a traveling mage-researcher almost forty years ago. The mage noticed that the circle of enormous rocks was aligned with three stars and that each of them shone their light through tiny orifices in the stones once a year, during the winter solstice. The name “Stargazer Observatory” became common after that and many people in the area come during the winter to see the strange alignment of the stars with the holes in the stones. People ignore the significance of it, or how difficult it is to achieve such a marvel or architecture. Little remains of the place, and even though there have been attempts at restoring the ruins to its original position and shape, they are met with resistance from the local populace. People want to keep the ruins as they are, as a place of beauty and mystery.