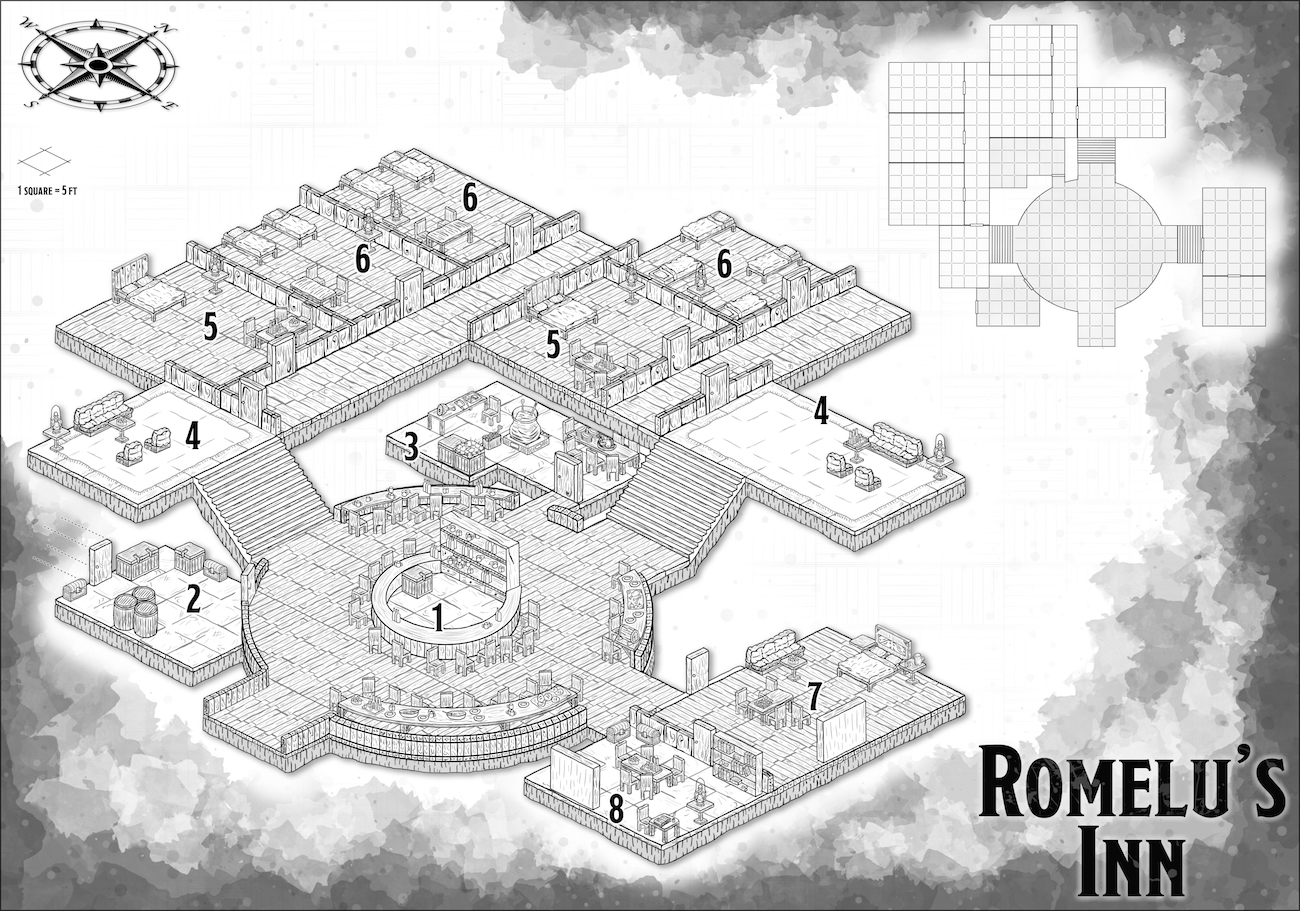 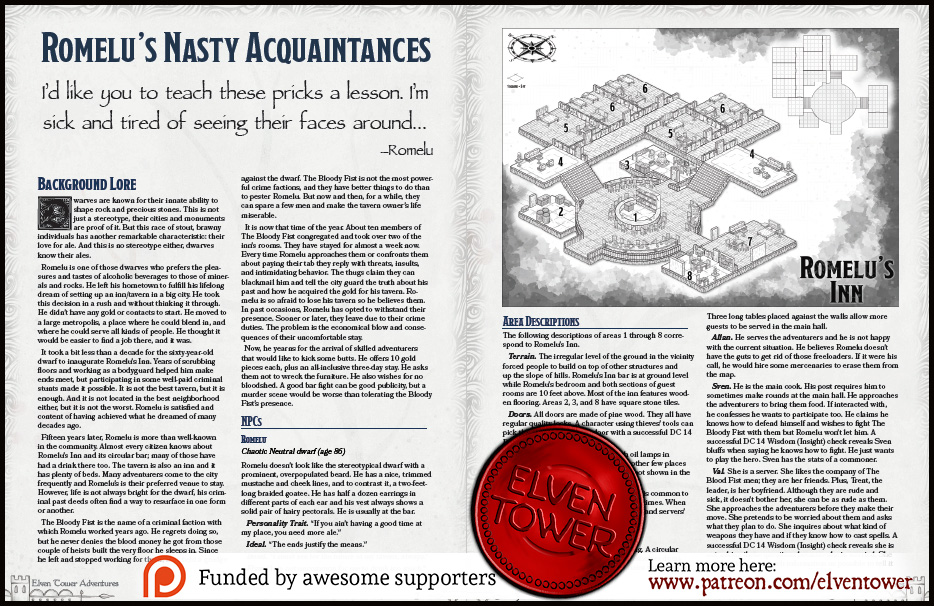 Dwarves are known for their innate ability to shape rock and precious stones. This is not just a stereotype, their cities and monuments are proof of it. But this race of stout, brawny individuals has another remarkable characteristic: their love for ale. And this is no stereotype either, dwarves know their ales.

Romelu is one of those dwarves who prefers the pleasures and tastes of alcoholic beverages to those of minerals and rocks. He left his hometown to fulfill his lifelong dream of setting up an inn/tavern in a big city. He took this decision in a rush and without thinking it through.  He didn’t have any gold or contacts to start. He moved to a large metropolis, a place where he could blend in, and where he could serve all kinds of people. He thought it would be easier to find a job there, and it was.

It took a bit less than a decade for the sixty-year-old dwarf to inaugurate Romelu’s Inn. Years of scrubbing floors and working as a bodyguard helped him make ends meet, but participating in some well-paid criminal stunts made it possible. It is not the best tavern, but it is enough. And it is not located in the best neighborhood either, but it is not the worst. Romelu is satisfied and content of having achieved what he dreamed of many decades ago.

Fifteen years later, Romelu is more than well-known in the community. Almost every citizen knows about Romelu’s Inn and its circular bar; many of those have had a drink there too. The tavern is also an inn and it has plenty of beds. Many adventurers come to the city frequently and Romelu’s is their preferred venue to stay. However, life is not always bright for the dwarf, his criminal past deeds often find a way to resurface in one form or another.

The Bloody Fist is the name of a criminal faction with which Romelu worked years ago. He regrets doing so, but he never denies the blood money he got from those couple of heists built the very floor he sleeps in. Since he left and stopped working for them, they held a grudge against the dwarf. The Bloody Fist is not the most powerful crime factions, and they have better things to do than to pester Romelu. But now and then, for a while, they can spare a few men and make the tavern owner’s life miserable.

It is now that time of the year. About ten members of The Bloody Fist congregated and took over two of the inn’s rooms. They have stayed for almost a week now. Every time Romelu approaches them or confronts them about paying their tab they reply with threats, insults, and intimidating behavior. The thugs claim they can blackmail him and tell the city guard the truth about his past and how he acquired the gold for his tavern. Romelu is so afraid to lose his tavern so he believes them. In past occasions, Romelu has opted to withstand their presence. Sooner or later, they leave due to their crime duties. The problem is the economical blow and consequences of their uncomfortable stay.

Now, he yearns for the arrival of skilled adventurers that would like to kick some butts. He offers 10 gold pieces each, plus an all-inclusive three-day stay. He asks them not to wreck the furniture. He also wishes for no bloodshed. A good bar fight can be good publicity, but a murder scene would be worse than tolerating the Bloody Fist’s presence.

Romelu doesn’t look like the stereotypical dwarf with a prominent, overpopulated beard. He has a nice, trimmed mustache and cheek lines, and to contrast it, a two-feet-long braided goatee. He has half a dozen earrings in different parts of each ear and his vest always shows a solid pair of hairy pectorals. He is usually at the bar.

Personality Trait. “If you ain’t having a good time at my place, you need more ale.”

Ideal. “The ends justify the means.”

Bond. “I must see for the future of my tavern, always.”

Flaw. “It is not uncommon for me to drink too much.”

The following descriptions of areas 1 through 8 correspond to Romelu’s Inn.

Terrain. The irregular level of the ground in the vicinity forced people to build on top of other structures and up the slope of hills. Romelu’s Inn bar is at ground level while Romelu’s bedroom and both sections of guest rooms are 10 feet above. Most of the inn features wooden flooring. Areas 2, 3, and 8 have square stone tiles.

Doors. All doors are made of pine wood. They all have regular quality locks. A character using thieves’ tools can pick the lock of any locked door with a successful DC 14 Dexterity check.

Light. There are several tables with oil lamps in various rooms of the inn. The bar and other few places are illuminated by torches on sconces (not shown in the illustration).

Sounds. Romelu’s Inn is always busy. It is common to see people chattering and gossiping at all times. When bards perform at the inn, Romelu’s yelling and servers’ voices accompany their music.

The bar at Romelu’s Inn is very appealing. A circular counter that ends in a three-story set of shelves dominates the room. An army of wooden chairs surrounds it. Three long tables placed against the walls allow more guests to be served in the main hall.

Allan. He serves the adventurers and he is not happy with the current situation. He believes Romelu doesn’t have the guts to get rid of those freeloaders. If it were his call, he would hire some mercenaries to erase them from the map.

Sven. He is the main cook. His post requires him to sometimes make rounds at the main hall. He approaches the adventurers to bring them food. If interacted with, he confesses he wants to participate too. He claims he knows how to defend himself and wishes to fight The Bloody Fist with them but Romelu won’t let him. A successful DC 14 Wisdom (Insight) check reveals Sven bluffs when saying he knows how to fight. He just wants to play the hero. Sven has the stats of a commoner.

Val. She is a server. She likes the company of The Blood Fist men; they are her friends. Plus, Trent, the leader, is her boyfriend. Although they are rude and sick, it doesn’t bother her, she can be as rude as them. She approaches the adventurers before they make their move. She pretends to be worried about them and asks what they plan to do. She inquires about what kind of weapons they have and if they know how to cast spells. A successful DC 14 Wisdom (Insight) check reveals she is not asking these questions because she is worried. She is trying to get as much information as possible to tell it to The Bloody Fist. She believes that they could stay if the heroes fail, and revealing their plans might be useful to turn the tides.

Romelu and Sven have the only keys for this room. There are wooden barrels and crates with supplies and stored foods. A large chest keeps tools, aprons, uniforms, and lots of empty bottles. The two smaller chests contain special spices and salts for seasoning foods, back-up silverware and knives, and a few leather pouches with gold coins.

Treasure. A passive Perception score of 15 or higher reveals the presence of the pouches with coin and the silverware. It all has a collective value of 45 gold pieces.

A massive pot to cook broths and stews burns at the center of the kitchen. Sven has to climb three steps to reach the wooden oar and stir the mix. The staff throws pieces of coal under the pot to feed the flames. The kitchen also features a couple of tables to organize servings and allow the staff to eat.

Only guests are allowed in both lobbies. They have a large sofa and two smaller ones. A coffee table with treats or wine accompanies each set. People staying at the inn can make use of these areas and drink away from the noise of the main hall. The Bloody Fist doesn’t allow anybody to get close to the northern lobby. One bandit and one thug drink on the sofas.

Romelu’s Inn has two bedrooms thought for couples. Both have a twin sized bed and they have a small table with five chairs in case the guests wish for a more private place to drink and talk. The Bloody Fist took possession of the room in the north. Two thugs play cards on the table while two bandits drink ale on the bed.

There are three rooms with two or more individual beds. The individual room at the north has more beds in it, and it is one of the rooms The Bloody Fist took. Trent (bandit leader), two thugs, and two bandits tell jokes and drink together while two of them arm-wrestle on the lamp table. In the second round of conflict, Val enters the fray and tries to defend her boyfriend with a frying pan. She has the stats of a commoner.

The dwarf invested some gold to make his room fancier. His bed features a hand-carved headboard and he sleeps under soft, delicate, silken sheets. He loves chess, and he sometimes has all-night-long game sessions with skilled customers. Romelu has the only key to his room, which is always locked.

Some VIP customers have earned Romelu’s trust and have entered his beloved studio. This calm place is where he writes his diary, keeps the administrative papers of his business, and stores his most precious belongings. A successful DC 15 Intelligence (Investigation) check reveals information in Romelu’s diary and about the tavern: Romelu regrets having links with a criminal faction. He wishes it could have been different. And right now, he is more and more worried about The Bloody Fists forced visits. He believes he cannot continue withstanding their presence anymore and he fears bankruptcy.

Treasure. A character using thieves’ tools can open both chests with a successful DC 15 Dexterity check. The chests have bags of gold pieces, six gold and silver pieces of jewelry such as necklaces, bracelets, and rings. All this has a collective value of 200 gold pieces. Additionally, there is a bottle of wine from a faraway vineyard, so old and so aged that it is worth 100 gold pieces alone.

If the adventurers accepted Sven’s help and he dies in battle, Romelu blames it on them. He believes they should have had the eyes to see the lad cannot harm a fly. He pays them and asks them to leave.

If the adventurers were able to get rid of The Bloody Fist without turning his tavern into a bloody murder scene, he thanks them and allows them to stay for three days for free.

If the adventurers made a gory mess and spilled guts and blood all over his tavern, he yells the adventurers to get the hell out. He refuses to pay for a job not done as he didn’t ask for corpses on his floor. Plus, he is the one who has to explain what happened to the guard and beg the gods the city allows him to stay open, and The Bloody Fist doesn’t seek revenge.

If the adventurers realized Val’s intentions since the beginning and made Romelu aware of this, he fires her.