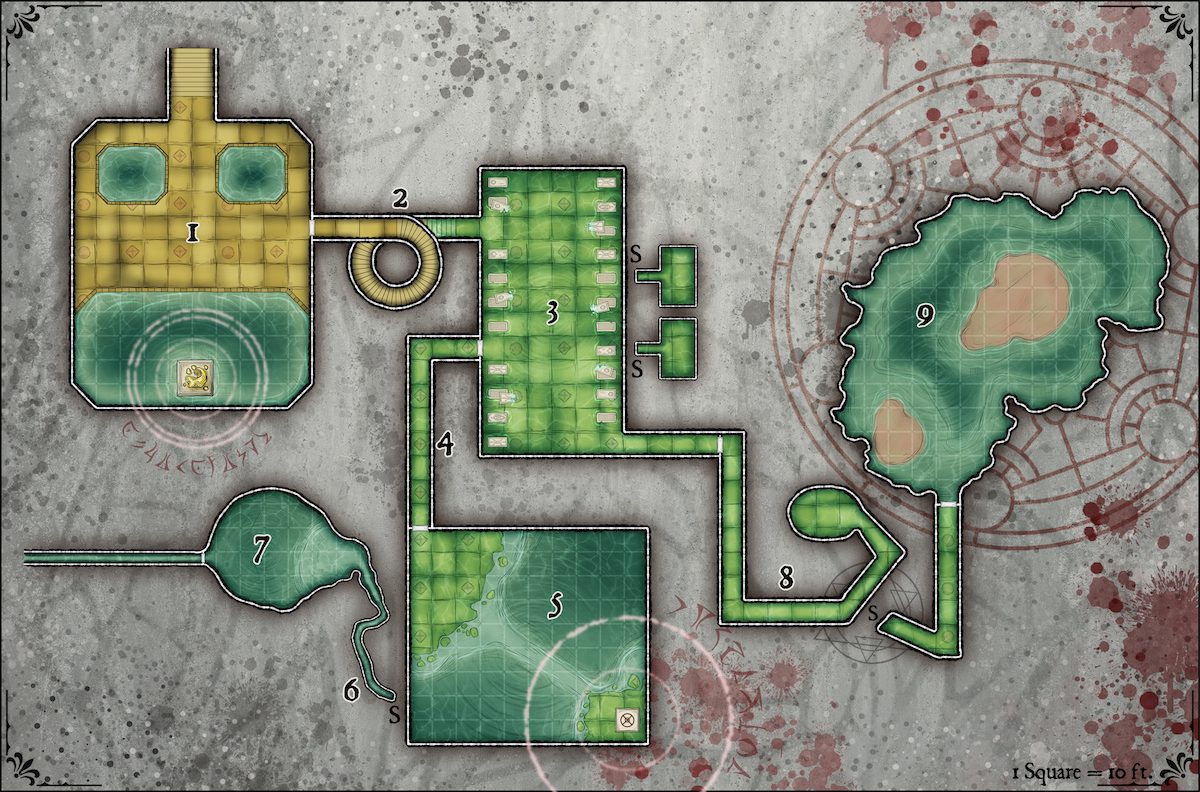 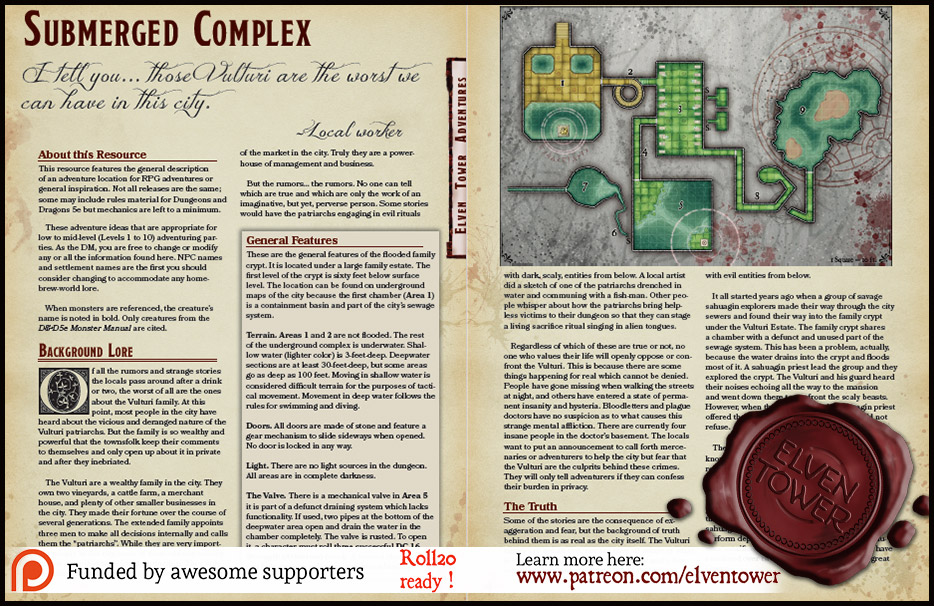 These adventure ideas that are appropriate for low to mid-level (Levels 1 to 10) adventur­ing parties. As the DM, you are free to change or modify any or all the information found here. NPC names and settlement names are the first you should consider changing to accommodate any homebrew-world lore.

Of all the rumors and strange stories the locals pass around after a drink or two, the worst of all are the ones about the Vulturi family. At this point, most people in the city have heard about the vicious and deranged nature of the Vulturi patriarchs. But the family is so wealthy and powerful that the townsfolk keep their comments to themselves and only open up about it in private and after they inebriated.

The Vulturi are a wealthy family in the city. They own two vineyards, a cattle farm, a merchant house, and plenty of other smaller businesses in the city. They made their fortune over the course of several generations. The extended family appoints three men to make all decisions internally and calls them the “patriarchs”. While they are very important people in the city, none of them old any nobility title or any other significant distinction. They only became relevant after they controlled a sizable part of the market in the city. Truly they are a powerhouse of management and business.

But the rumors… the rumors. No one can tell which are true and which are only the work of an imaginative, but yet, perverse person. Some stories would have the patriarchs engaging in evil rituals with dark, scaly, entities from below. A local artist did a sketch of one of the patriarchs drenched in water and communing with a fish-man. Other people whisper about how the patriarchs bring helpless victims to their dungeon so that they can stage a living sacrifice ritual singing in alien tongues.

Regardless of which of these are true or not, no one who values their life will openly oppose or confront the Vulturi. This is because there are some things happening for real which cannot be denied. People have gone missing when walking the streets at night, and others have entered a state of permanent insanity and hysteria. Bloodletters and plague doctors have no suspicion as to what causes this strange mental affliction. There are currently four insane people in the doctor’s basement. The locals want to put an announcement to call forth mercenaries or adventurers to help the city but fear that the Vulturi are the culprits behind these crimes. They will only tell adventurers if they can confess their burden in privacy.

Some of the stories are the consequence of exaggeration and fear, but the background of truth behind them is as real as the city itself. The Vulturi family are not all evil, nor are they all aware of what is happening, but the Vulturi patriarchs and a few other family members do, in fact, have dealings with evil entities from below.

It all started years ago when a group of savage sahuagin explorers made their way through the city sewers and found their way into the family crypt under the Vulturi Estate. The family crypt shares a chamber with a defunct and unused part of the sewage system. This has been a problem, actually, because the water drains into the crypt and floods most of it. A sahuagin priest lead the group and they explored the crypt. The Vulturi and his guard heard their noises echoing all the way to the mansion and went down there to confront the scaly beasts. However, when they were close, the sahuagin priest offered the three patriarchs a boon they could not refuse.

The sahuagin worshipped a creature of evil known by them as Dagon. This entity would always reward their followers after performing rites and sacrifices. The patriarchs already where evil men. Corrupt overlords drunk with power and impunity. The sahuagin seduced them with tales of glory and power to expand their dominion in the city. And thus began the communion of both human and sahuagin. They commune twice per month and perform depraved ceremonies and sacrifices. Human sacrifices are a new thing for them. They have sacrificed over twenty people in honor of the great Dagon.

A long flight of stairs leads to this chamber. The stairs go up to the basement in the Vulturi Mansion. Reaching this location from there has a high risk of getting caught. A group of people may also reach this chamber by swimming in the sewers and ending up in one of the containment basins in this chamber. Doing so requires getting a map of the city’s sewage system. There is a crumbling statue of Dagon in the middle of the south basin. Two Vulturis (cultist) and two sahuagin in this area are surprised to see visitors and attack on sight.

The spiral stairs lead down to the main crypt. Two swarms of quippers detect the vibrations from anyone descending from the stairs and get ready to attack as soon as anyone enters the water below.

There are more than twenty sarcophagi in this area. Some of them are opened and were apparently sacked. Water has filtered into some of the caskets too. There appears to be nothing of value in this location. Four sahuagin and their two guardian sharks warn any visitors that pushing their luck any further will end up with them becoming sea fodder for the sharks.

A passive Perception score of 16 or higher or a successful DC 16 Wisdom (Perception) check reveals that there are strange cracks on the west wall suggesting the location of two secret doors. These two passages lead to secret crypts. The caskets eroded into nothingness a while ago but there are still plenty of gold coins (150 gp) on the floor.

The sahuagin priest placed explosive runes on the floor of this chamber in two different locations. The detonation of deactivation of one of these sets of runes does not affect the other. Any creature walking or swimming through this hallway must make a successful DC 17 Dexter­ity saving throw, taking 12 (4d6) fire damage on a failed save, or half as much damage on a successful one.

The sahuagin and the Vulturi have used the gifts of Dagon to summon and bind three water elementals who swim in this chamber to guard their vault and secret exit (Area 7). The adventurers can have the mind to use the level at the southeast side of the room to drain the room. Three successful checks open the valve and drain the room of all water, effectively getting rid of the water elementals.

If a character dives in the water of if they drain the water, a passive Perception score of 16 or higher or a successful DC 16 Wisdom (Perception) check reveals the presence of a secret tunnel on the west side of the wall.

This passage is narrow enough that medium creatures need to squeeze through it.

There are several metal chests at the bottom of the pond in this room. The chests contain treasures and stuff stolen from sacrifice victims and some other treasure of unknown origin. Collectively, there are 15,000 gp in this location. Getting it out of the pond and Vulturi Estate is a harder challenge.

The tunnel veers north and circles in on itself to reveal a round dead end. There is nothing of interest in this location. Retracing their steps, adventurers with a passive Perception score of 15 or higher or a successful DC 15 Wisdom (Perception) check notice scratch marks on the wall and that the bricks on a section of wall are different from the rest. This suggests the presence of a secret tunnel to the east. Opening the secret door requires a character to meddle with the mechanism that keeps the secret wall in its place. A successful DC 16 Dexterity (Thieves Tools) check allows a character to access the secret tunnel.

This large chamber features several levels of water depth, as well as two surfaces above water level. The chamber is different from the rest of the complex in that it is mostly a natural cave. The central island in the center of the water mass is bursting with activity. The three Vulturi patriarchs (cultist leader), the sahuagin priest, two sahuagin, and a woman bound by the wrists and gagged are on the island. The evil creatures are in the middle of a sacrifice ritual, singing strange commands in indecipherable utterances.

These are the general features of the flooded family crypt. It is located under a large family estate. The first level of the crypt is sixty feet below surface level. The location can be found on underground maps of the city because the first chamber (Area 1) is a containment basin and part of the city’s sewage system.

Terrain. Areas 1 and 2 are not flooded. The rest of the underground complex is underwater. Shallow water (lighter color) is 3-feet-deep. Deepwater sections are at least 30-feet-deep, but some areas go as deep as 100 feet. Moving in shallow water is considered difficult terrain for the purposes of tactical movement. Movement in deep water follows the rules for swimming and diving.

Doors. All doors are made of stone and feature a gear mechanism to slide sideways when opened. No door is locked in any way.

Light. There are no light sources in the dungeon. All areas are in complete darkness.

The Valve. There is a mechanical valve in Area 5 it is part of a defunct draining system which lacks functionality. If used, two pipes at the bottom of the deepwater area open and drain the water in the chamber completely. The valve is rusted. To open it, a character must roll three successful DC 16 Strength (Athletics) check. A second character can help the one rolling to give him advantage. 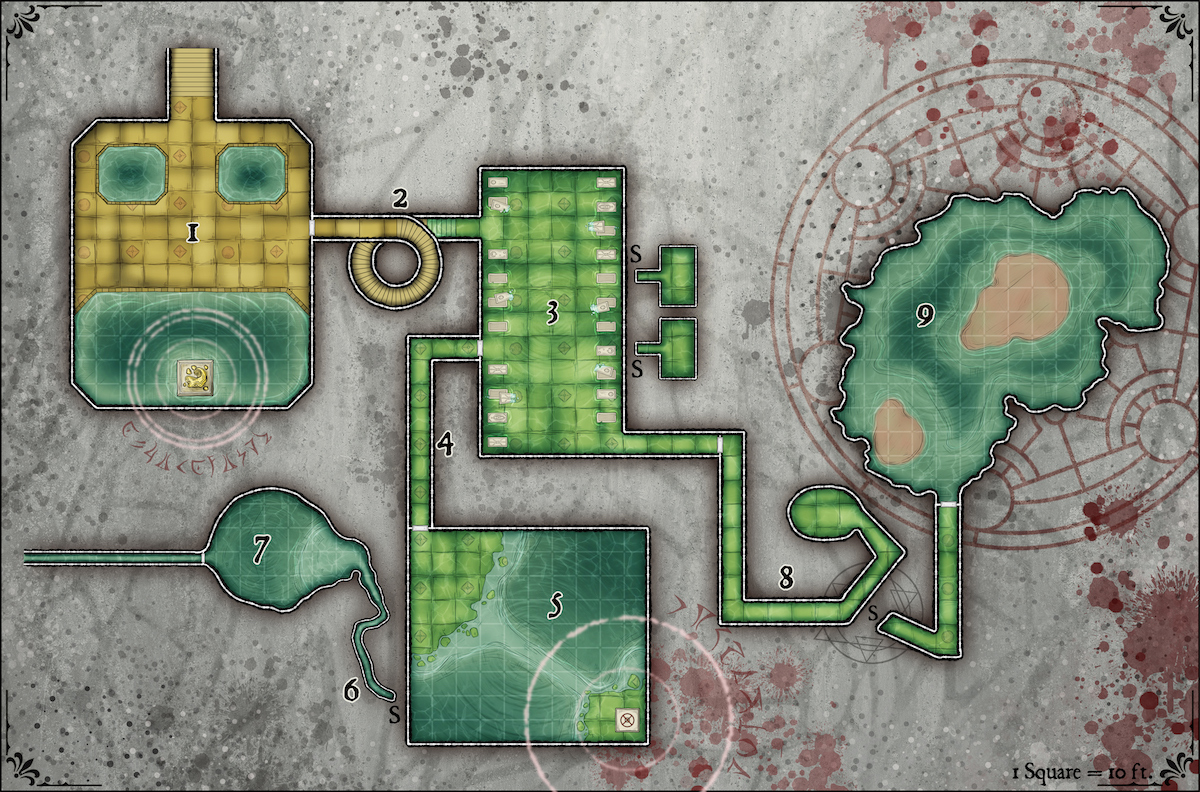