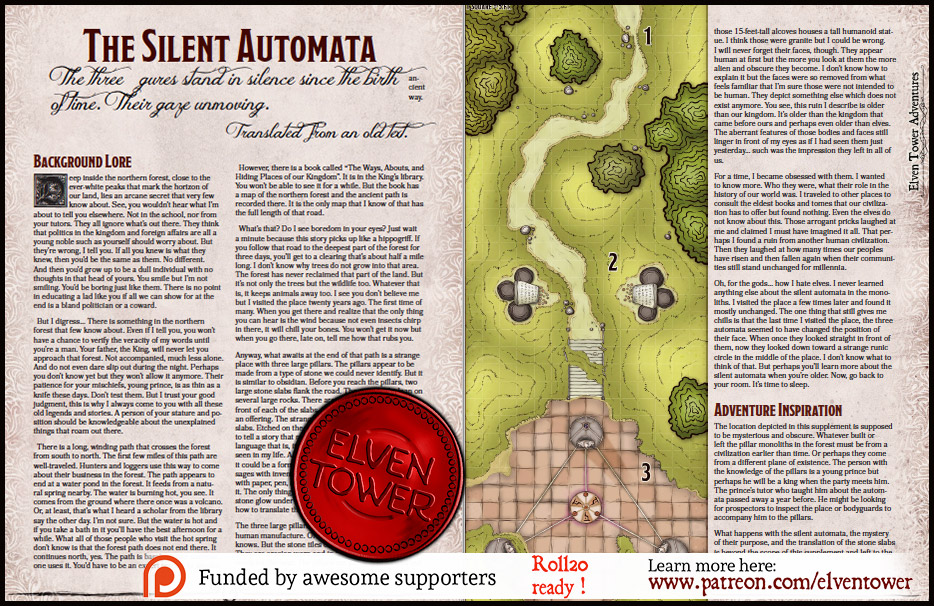 Deep inside the northern forest, close to the ever-white peaks that mark the horizon of our land, lies an arcane secret that very few know about. See, you wouldn’t hear what I’m about to tell you elsewhere. Not in the school, nor from your tutors. They all ignore what’s out there. They think that politics in the kingdom and foreign affairs are all a young noble such as yourself should worry about. But they’re wrong, I tell you. If all you knew is what they knew, then you’d be the same as them. No different. And then you’d grow up to be a dull individual with no thoughts in that head of yours. You smile but I’m not smiling. You’d be boring just like them. There is no point in educating a lad like you if all we can show for at the end is a bland politician or a coward.

But I digress… There is something in the northern forest that few know about. Even if I tell you, you won’t have a chance to verify the veracity of my words until you’re a man. Your father, the King, will never let you approach that forest. Not accompanied, much less alone. And do not even dare slip out during the night. Perhaps you don’t know yet but they won’t allow it anymore. Their patience for your mischiefs, young prince, is as thin as a knife these days. Don’t test them. But I trust your good judgment, this is why I always come to you with all these old legends and stories. A person of your stature and position should be knowledgeable about the unexplained things that roam out there.

There is a long, winding path that crosses the forest from south to north. The first few miles of this path are well-traveled. Hunters and loggers use this way to come about their business in the forest. The path appears to end at a water pond in the forest. It feeds from a natural spring nearby. The water is burning hot, you see. It comes from the ground where there once was a volcano. Or, at least, that’s what I heard a scholar from the library say the other day. I’m not sure. But the water is hot and if you take a bath in it you’ll have the best afternoon for a while. What all of those people who visit the hot spring don’t know is that the forest path does not end there. It continues north, yes. The path is barely visible since no one uses it. You’d have to be an expert tracker to see the ancient way.

However, there is a book called “The Ways, Abouts, and Hiding Places of our Kingdom”. It is in the King’s library. You won’t be able to see it for a while. But the book has a map of the northern forest and the ancient path is recorded there. It is the only map that I know of that has the full length of that road.

What’s that? Do I see boredom in your eyes? Just wait a minute because this story picks up like a hippogriff. If you follow that road to the deepest part of the forest for three days, you’ll get to a clearing that’s about half a mile long. I don’t know why trees do not grow into that area. The forest has never reclaimed that part of the land. But it’s not only the trees but the wildlife too. Whatever that is, it keeps animals away too. I see you don’t believe me but I visited the place twenty years ago. The first time of many. When you get there and realize that the only thing you can hear is the wind because not even insects chirp in there, it will chill your bones. You won’t get it now but when you go there, late on, tell me how that rubs you.

Anyway, what awaits at the end of that path is a strange place with three large pillars. The pillars appear to be made from a type of stone we could never identify. But it is similar to obsidian. Before you reach the pillars, two large stone slabs flank the road. The stone slabs lean on several large rocks. There are many smaller stones in front of each of the slabs, arranged as if they were part of an offering. The strangest of all were the scriptures in the slabs. Etched on the stone, symbol after symbol, they try to tell a story that none of us could translate. Whatever language that is, it does not look like anything I have ever seen in my life. A mage was with us that day. She thought it could be a form of cipher, a way to write hidden messages with invented symbols or codes. She tried her best with paper, pen, and even spells, but she could not crack it. The only thing I can say is that the symbols on the stone glow under the moonlight. Maybe that’s a clue on how to translate them.

The three large pillars stand on a stone floor of clear human manufacture. Or maybe it wasn’t humans, who knows. But the stone tiles on the floor are not natural. They are erosion-worn and in bad condition. Now, get ready for the best: The pillars are partially hollowed out on the inside of their triangular arrangement. Each of those 15-feet-tall alcoves houses a tall humanoid statue. I think those were granite but I could be wrong. I will never forget their faces, though. They appear human at first but the more you look at them the more alien and obscure they become. I don’t know how to explain it but the faces were so removed from what feels familiar that I’m sure those were not intended to be human. They depict something else which does not exist anymore. You see, this ruin I describe is older than our kingdom. It’s older than the kingdom that came before ours and perhaps even older than elves. The aberrant features of those bodies and faces still linger in front of my eyes as if I had seen them just yesterday… such was the impression they left in all of us.

For a time, I became obsessed with them. I wanted to know more. Who they were, what their role in the history of our world was. I traveled to other places to consult the eldest books and tomes that our civilization has to offer but found nothing. Even the elves do not know about this. Those arrogant pricks laughed at me and claimed I must have imagined it all. That perhaps I found a ruin from another human civilization. Then they laughed at how many times our peoples have risen and then fallen again when their communities still stand unchanged for millennia.

Oh, for the gods… how I hate elves. I never learned anything else about the silent automata in the monoliths. I visited the place a few times later and found it mostly unchanged. The one thing that still gives me chills is that the last time I visited the place, the three automata seemed to have changed the position of their face. When once they looked straight in front of them, now they looked down toward a strange runic circle in the middle of the place. I don’t know what to think of that. But perhaps you’ll learn more about the silent automata when you’re older. Now, go back to your room. It’s time to sleep.

The location depicted in this supplement is supposed to be mysterious and obscure. Whatever built or left the pillar monoliths in the forest must be from a civilization earlier than time. Or perhaps they come from a different plane of existence. The person with the knowledge of the pillars is a young prince but perhaps he will be a king when the party meets him. The prince’s tutor who taught him about the automata passed away a year before. He might be looking for prospectors to inspect the place or bodyguards to accompany him to the pillars.

What happens with the silent automata, the mystery of their purpose, and the translation of the stone slabs is beyond the scope of this supplement and left to the GMs discretion.